As Star Wars fans, we all have our own favorite characters. But veteran collector Bill McBride takes it to the next level. McBride collects everything Darth Vader, and lots of it. Just how big is his collection? He doesn’t know -- he stopped counting after 63,000 Vader items. 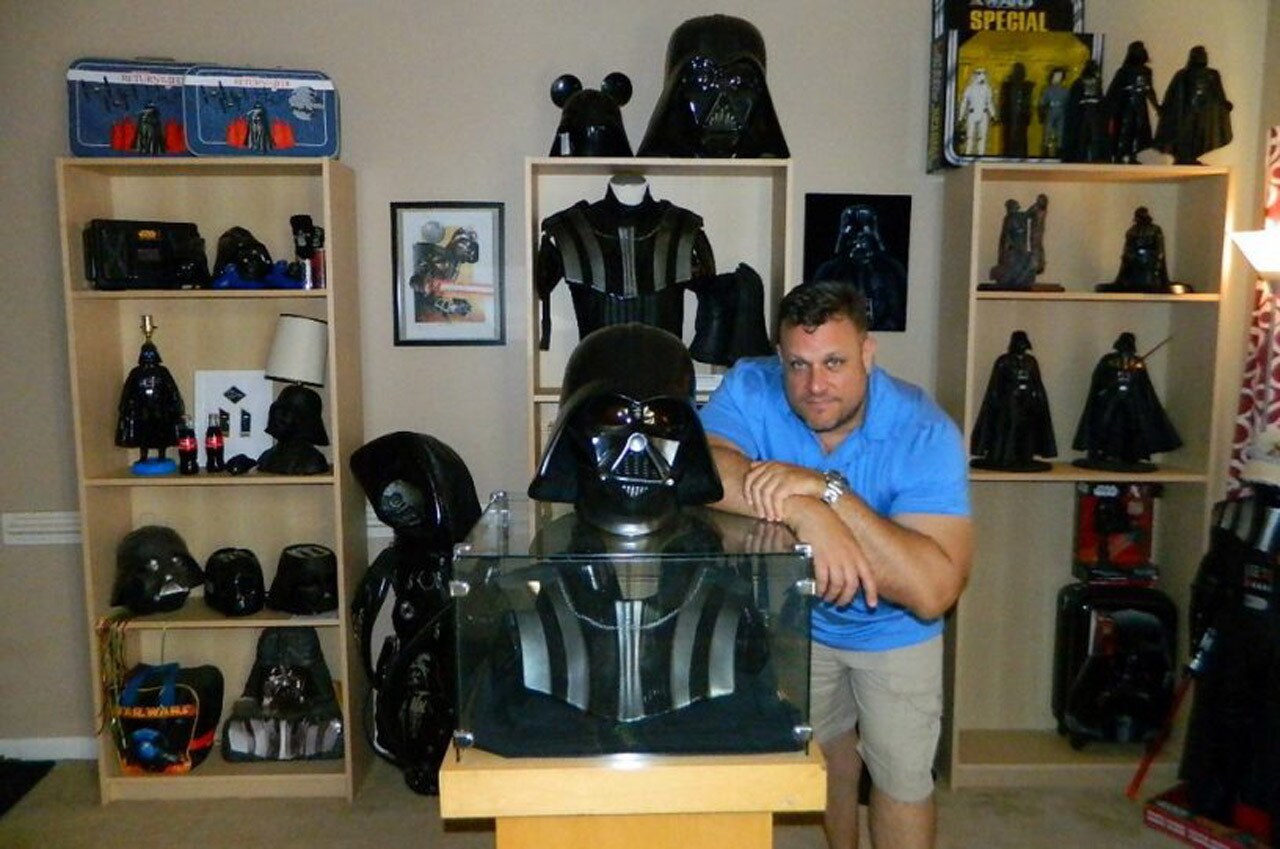 His affinity for the original Dark Lord of the Sith goes back to his childhood, seeing Star Wars: A New Hope for the first time. “I remember driving past our big community theater and the line was out the door and down the sidewalk,” Bill tells StarWars.com. His excitement was so palpable, he didn’t have to wait long. “[My father] literally went to the next intersection, made a U-turn, came back, and that was it.”

McBride and his dad were in the theater later that day; when Darth Vader burst onto the scene in the film, Bill was immediately hooked. “I was like, ‘Wow! Look at this dude, he is cool!’” he recalls. Soon, Bill had his first Darth Vader action figure, given to him by his parents. He took extra special care of the prized plaything; when he’d go play with his friends, Bill would leave Darth Vader at home, “so he wouldn’t get messed up or ride a bottle rocket to the moon,” he jokes. In college, Bill became a more serious collector, going to shows and toy shops. Years later, among his vast collection Bill has pieces that range from used candy wrappers to official props and everything in between. His showcase piece is an original Darth Vader helmet. Although it wasn’t screen-used, he says, “it was meant to be one of the tour costumes, and never got finished. I absolutely love that piece.” Any prop Vader item from the era of Star Wars: A New Hope was a Holy Grail for Bill. “I could get out of the hobby and sell everything else, but that’s the one thing I’d never let go of.”

With his collectibles ranging in size from a Japanese Darth Vader sewing thimble to the full Darth Vader costume from Seth McFarlane’s Ted movie, Bill’s coveted collection also includes toy prototypes, a unique find that makes him feel like a kid again. “It’s a childhood reaction,” he says. “‘Look at this toy I got, and no one else has it.’ Unproduced prototypes are the adult equivalent.” 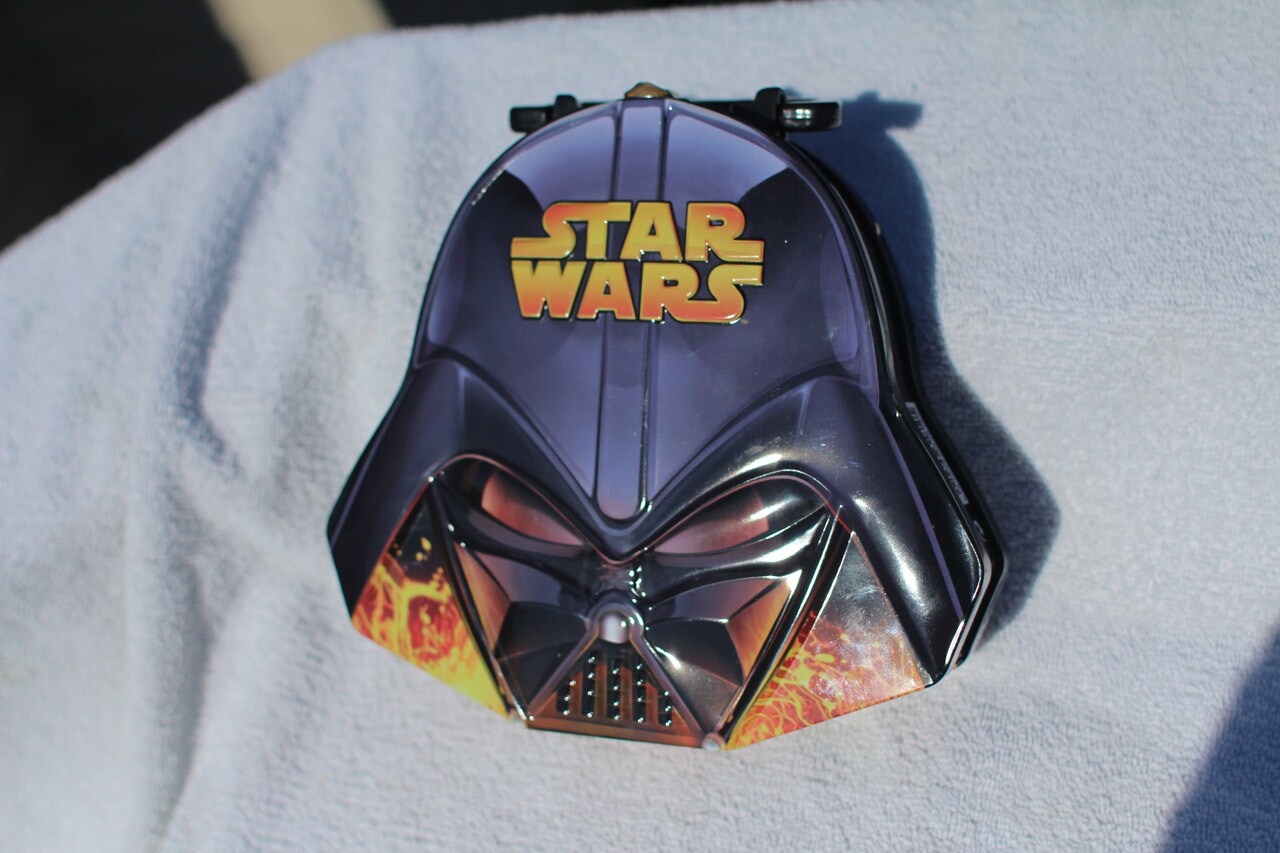 Perhaps the wildest item he has is a bottle of Darth Vader cologne from Spain. “It is absolutely 100% horrific,” he says after opening it to try it out. “It smells like somebody trying to come up with a knock off young men’s body spray but couldn’t get it."

Another oddity is his favorite food-related collectible -- vintage ice cream wrappers from the UK. “Graphically they are super cool, but really crazy hard to find,” he explains. “It speaks of the worldwide popularity of Star Wars that people did save this stuff. Some mom or dad thought, ‘My kid loves Star Wars and I’m going to put this aside for them.’” 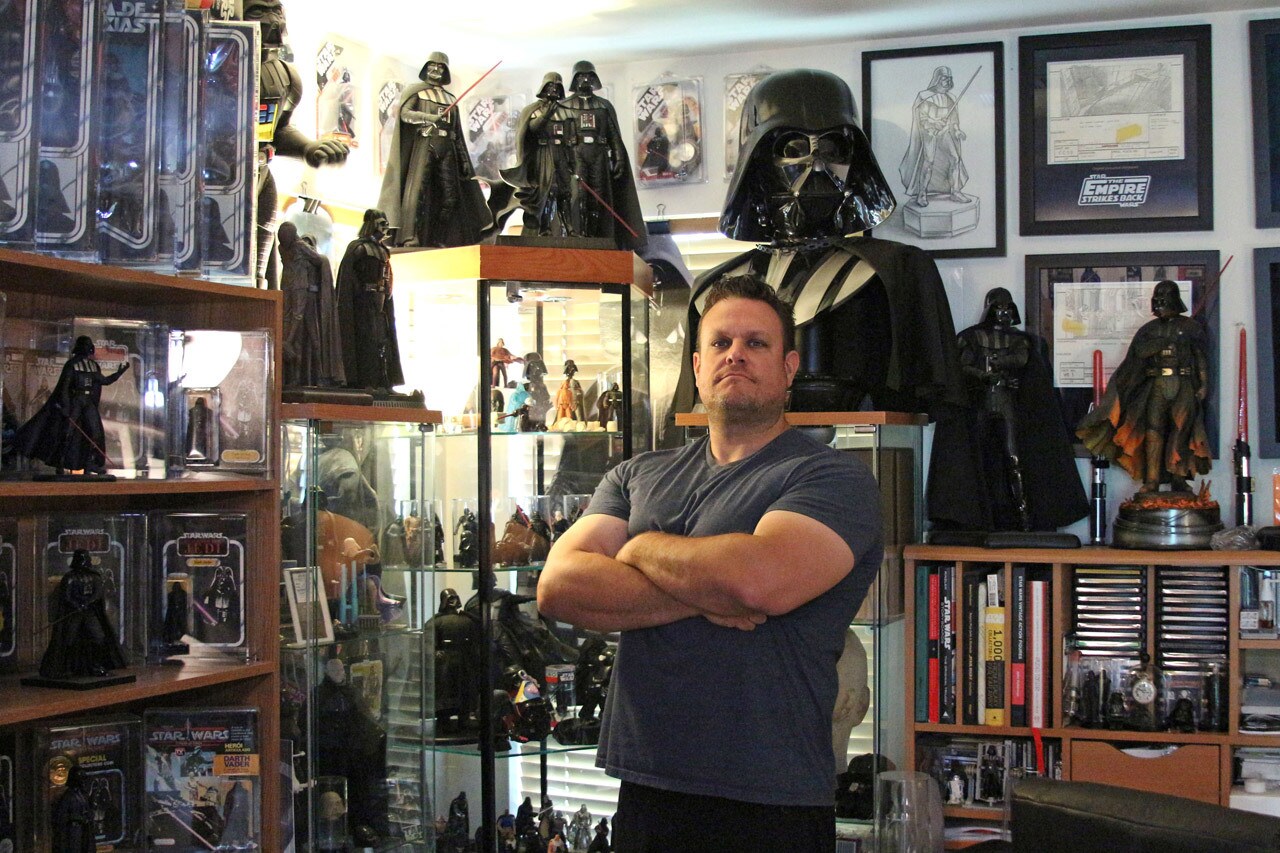 Echoing Vader’s former mentor Obi-Wan Kenobi, Bill says amassing such a collection has been a lesson in patience. He often shares this tale with collectors who are just starting out. Once an extremely rare vintage Vader prototype came up at a toy shop auction, but he missed it. He spent the next 17 years tracking it as it changed hands until, finally, the owner contacted him to sell it. “We agreed on a price and I flew out to Los Angeles to buy it, pick it up, hung out for a little bit, and flew back,” he says. “A cross country trip. A lot of money. And 17 years of patience.”

And Bill is always happy to help use his expertise in all things Darth Vader merchandise as a force for good. He routinely helps out in the collecting community with evaluations and appraisals. “There are some very, very rare and expensive vintage pieces,” he says, but not everything on the open market is legitimate. “With anything of that nature, there are people making counterfeits or reproductions, and I’m one of the experts at spotting those. It can make the difference between a $500 mistake and a $50,000 mistake.”

But don’t expect Bill to expand his collection beyond his Sith Lord focus. For the lifelong fan of Darth Vader, the iconic villain is the only character he’s ever been interested in collecting. “Other long-time collector friends think it’s kind of weird, being focused on just one thing, but it’s the only thing I want,” he says. “People think it’s limiting yourself, but because of [Vader's] popularity, there is such a depth and range of products from all over the world. I love collecting all those oddball items. And I absolutely love the character.”

Is there any place in the Star Wars galaxy you would want to visit?

Would you join the Rebel Alliance or the Empire?

Bill: [Laughs.] I’m drawn to the Empire, but given my nature as a Marine veteran, I’d see myself in the Rebellion.

You can have Mando’s Darksaber, Kylo Ren’s unstable red lightsaber, or Luke Skywalker’s green lightsaber. Which do you choose and why?

Bill: Darksaber. It’s so different and cool. Kylo’s saber is cool but more of a medieval broadsword. The Darksaber is its own thing.

If you could align yourself with any group in the Star Wars galaxy -- the Jedi, the First Order, the Mandalorian Death Watch, whatever you want -- what would it be?

Bill: The Sith. But I don’t know if I would want Vader as a master. The uniforms are definitely cooler -- that’s the selling point.

Which Star Wars character would you want as a road trip buddy?

Bill: Definitely R2-D2. He knows what’s going on but keeps it to himself. He’d be extra helpful and when I just needed to chill, he’d be cool with that. Also, he wouldn’t try to take over the radio.