Most Impressive Fans: Moya Kojima's Skills Are Complete with Her Giant-Size Lightsaber Cosplay

An elegant weapon for a more civilized cosplay.

Artist Angelica “Moya” Kojima is a cosplayer with a heart of kyber crystal.

During Star Wars Celebration Europe last year, she suited up to pay homage to her favorite Star Wars film with an unforgettable ensemble — a larger than life version of Luke Skywalker's green-bladed lightsaber. She even snagged a photo-op with Mark Hamill himself, who gamely posed as if he were about to duel Darth Vader. In honor of the 40th anniversary, during Celebration Orlando she revisited the role with a fresh twist, this time creating a costume version of Anakin's lightsaber, gifted to Luke in the original film.

This time Moya, 25, had the chance to stand beside Hamill and Hayden Christensen for an epic photo spread that completed her personal trilogy.

After returning to her home in Tokyo, we tracked Moya down to find out what made the costumer buck the usual trend of celebrity portraits with her unique and unwieldy costume choices.

It was Moya's love for the character of Luke in Return of the Jedi that drew her to the original idea last year as she was preparing to meet-and-greet Hamill at Celebration. The artist and costumer typically opts for dresses with a vintage flair or crafting dioramas, she says. 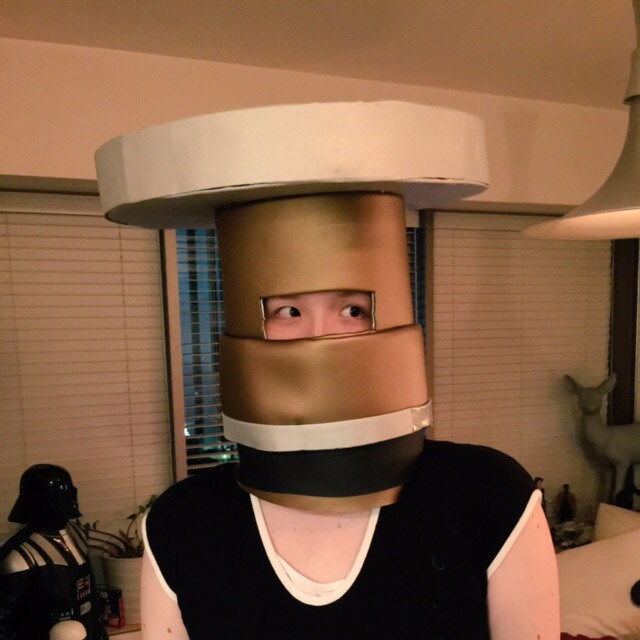 “I thought, 'What is the nearest thing to Jedi Luke?' And my answer was 'Luke's lightsaber.'” After all, Luke forged the weapon with care and always kept it by his side, she reasoned. What more perfect ensemble could she wear to pose with the actor who brought Luke to life?

She couldn't get past TSA with a giant lightsaber suit, so after two days of prep, much of the work completing the first saber costume — a mix of metallic silver fabric, cardboard, styrofoam, “and a lot of glue,” complete with a tiny inflatable blade — was done over three hours in her London hotel room.

Initially, Moya was nervous that her costume would leave fellow fans befuddled.

But she was confident that if anyone was likely to get it, it would be the devotees at Celebration.

Moya could barely see a thing in that saber, she couldn't talk, and her arms were pinned inside the oversized hilt, so she relied on her boyfriend, Kenichi “Ken” Hamashima, to help her navigate and communicate.

Moya made her way through the queue to meet Mark Hamill. “So my boyfriend said to Mark, 'Could you please hold this as a lightsaber?'”

Hamill burst into a laugh, then complied and struck a pose. 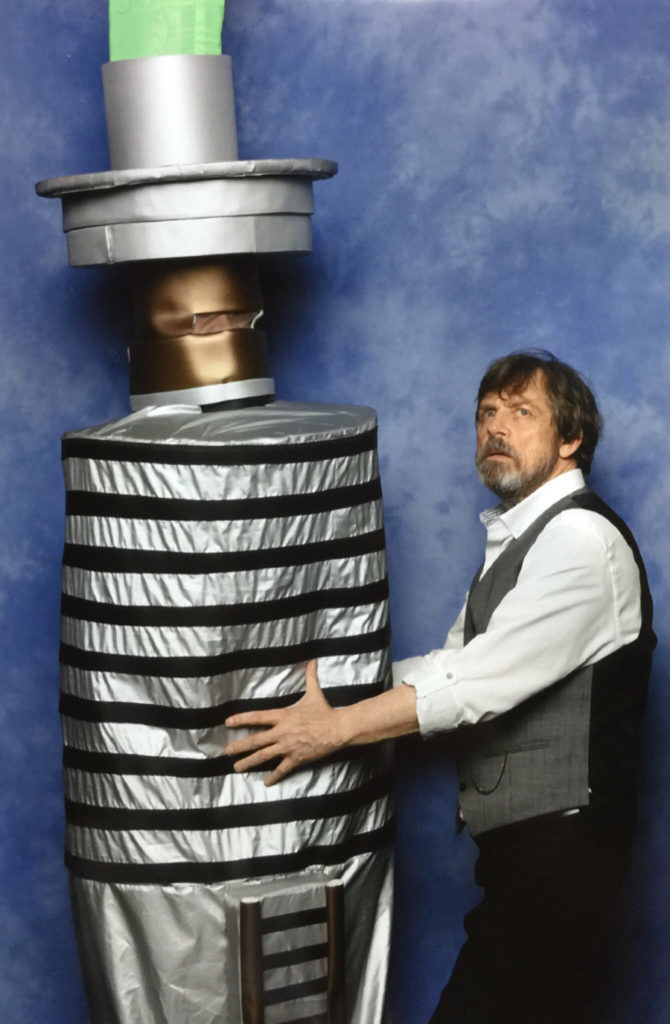 When Moya decided she was heading to Orlando to celebrate the 40th anniversary, she knew she wanted to recapture the magic with Luke's original saber.

The fact that Hayden Christensen, who played Anakin in the prequels, was later announced as a celebrity guest was a fortuitous accident. Or as Moya puts it, “It was a miracle.”

With one trial under her...well, lightsabers don't really have belts, do they? But suffice it to say her experience helped inform a more user-friendly second saber suit.

'I think he remembered me'

Moya sketched out an easy design, and got to work measuring the individual parts using images of the movie prop for guidance.

She sewed together a cloth tube, using cardboard and styrofoam to give it weight and shape, trying it on over and over as she made fine adjustments. Then she added a row of clear plastic eggs and other details for switches, buttons, and the grip. 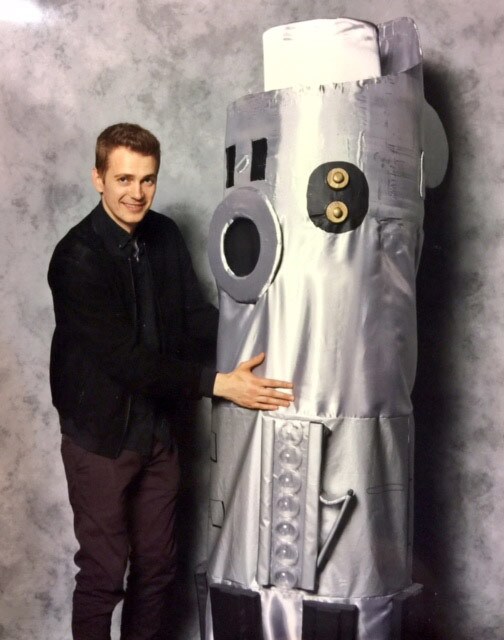 This time she included a circular window so she could poke her arms out of the costume without taking it off entirely — an added perk she used wisely for a few meta photo-ops holding other lightsabers she found on the exhibition floor. The costume was also malleable enough that she could sit while wearing it.

Christensen was the first to spot her in full regalia. “He said, 'It's my saber!' and I cried,” Moya says. Once again, her boyfriend Ken was by her side to ask the actor to hold the cosplayer in a pose as if he were being reunited with his trusty weapon. He happily complied. “He was so kind to me,” she says. Then it was on to the second Hamill photo-op. “I think he remembered me,” she says. “And he made the coolest face. My life is now complete!”

Walking through the convention center, Moya says visibility was low, so she couldn't always watch how other fans were reacting to a walking, talking lightsaber in their midst. “But I heard a lot of laughter,” she says, and she received a lot of compliments on the remarkable costume.

She only stayed in character for one hour, because the hilt is rather heavy and hot, but before she returned to her mild-mannered alter ego of regular human Star Wars fan, she and some other convention cosplayers had a little fun. 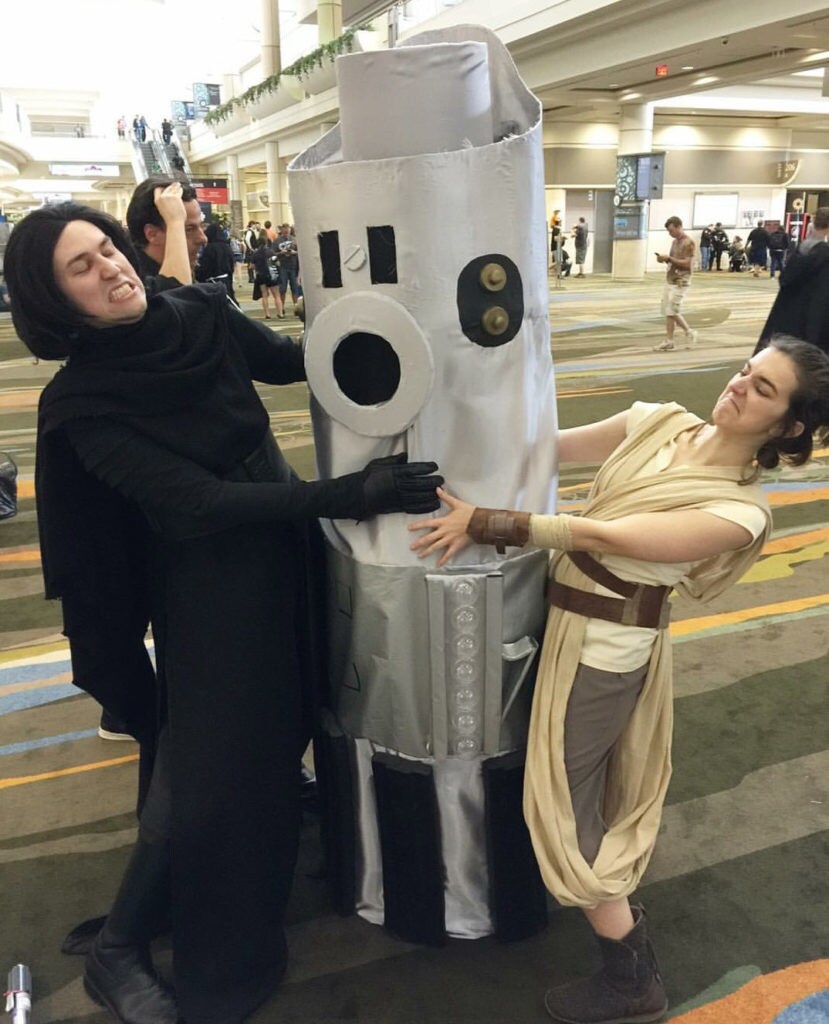 After spotting cosplayers Kyle Joseph E, known as “Mr. E,” and Marisa Bowers, who were decked out as Kylo Ren and Rey, Moya's boyfriend asked if they might indulge her in making a short video. Then she took a running start, sailing past Kyle to land safely in Marisa's arms, in a fan-film remake of the pinnacle moment in The Force Awakens.

“We only did the one take, as it was perfect!” Kyle says. The video was shared so widely it made the front page of Reddit and inspired one fan to edit together a gif where it appears Moya's lightsaber lights up at the end, “which was great for a laugh,” he adds.

The costume, Moya sadly reports, was in the trash heap before she left Orlando on the 18-hour journey back home to Japan. All but one part, that is.

Feeling sentimental about her star encounters, she cut out of the section where Hamill and Christensen had rested their hands as a keepsake.

Return of the Jedi.

I saw Episode III in a movie theater on opening day. It was fun!

It's a tie — the speeder bike chase and "I am a Jedi, like my father before me.”