The two brothers look back on their painstakingly-made images of the Battle of Hoth, Cloud City, and more.

James and Robert Dastoli launched their blog, a nostalgic tour of their pre-teen Star Wars fan art carefully crafted pixel-by-pixel in Microsoft Paintbrush, at the encouragement of old friends who loved the images. They also thought it might attract viewers to their current projects. Instead, it snared a superfan halfway across the world in France, who curated his own favorites from their collection. (More on that later.)

The identical twins, now 31-year-old freelance digital effects artists who also run their own film production company in the Los Angeles area, recently sat down with StarWars.com to talk about how a long ago project that bordered on obsession became a modern day treasure. Or as James calls it, “This weird middle school fan art blog.”

Nothing about the twins’ first foray into digital design was simple. 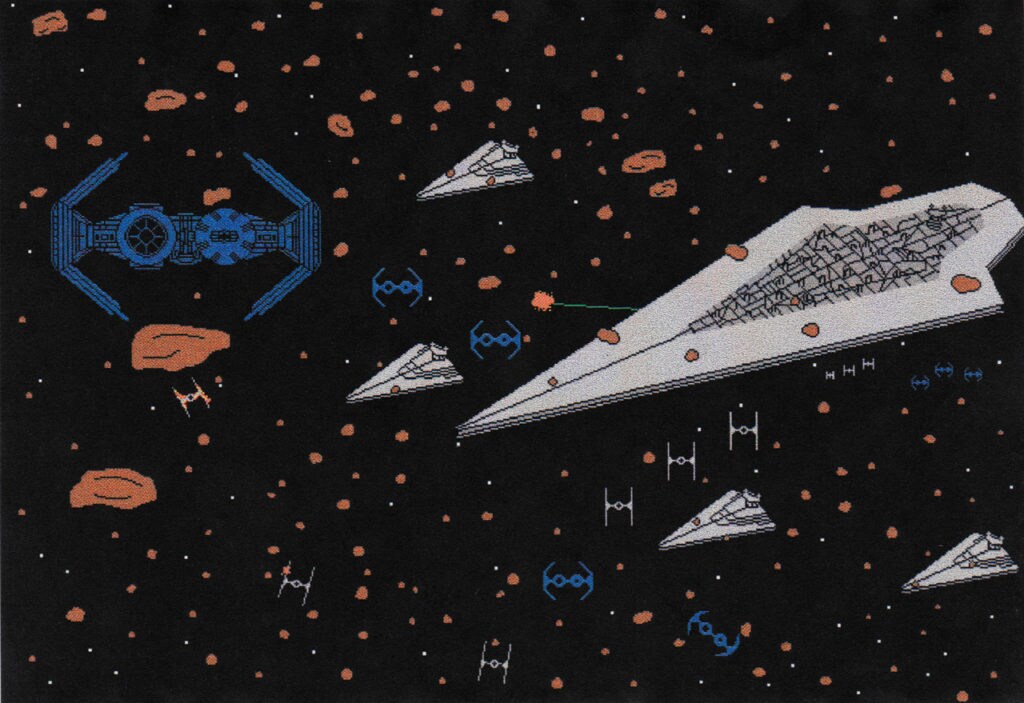 They didn’t know the basics, like how to save files to floppy disk. Still, they were content to spend hours hunched over oversized desktop computers then, with the help of a family printer scored at a Labor Day sale and patient parents willing to supply the ink cartridges, print their daily digital creations in hard copy and file them away for safe keeping. “We didn’t have much going on,” James joked.

Over two years, the preteens churned out about 700 sometimes grainy, but always meticulous, homages to the Star Wars universe, painstakingly muddling through their craft with what was fast becoming archaic technology.

Towards the end, they unlocked the key to digital archiving and managed to file away 14 of the drawings.

But in August of 1997, when the 12-year-olds first put pixel to paper in Stamford, Connecticut, they were just trying to figure out their first PC.

The machine was outdated even then. Windows 95 had been on the market for two years, but the computer at the brothers’ disposal was equipped with Windows 3.1.

“It was so old already and it was so bad,” Robert says. “It didn’t have all the things our friends had on their computers,” like sound cards or CD Rom drives. There was definitely no modem to connect to the Internet. “So we couldn’t really do anything on this computer other than play Solitaire, Minesweeper, and we found what was at that point called Microsoft Paintbrush,” Robert said.

The brothers had always been artistic, but this opened up new universe of possibilities.

“For some reason, we didn’t think you could save,” James says. “But there was an undo button. I think we were just so excited about this new technology.”

The twins relied on Micro Machines, paused VHS tapes, Star Wars Insider spreads of concept art and comic books on loan from friends to create their earliest attempts at Star Wars space battles and landscapes. There was something about the look and feel of a galaxy far, far away that held them entranced. “Design has to much to do with it, which is why we wanted to make it,” James says. “The way that the graphics on an X-wing looked. That’s what spoke to us.” 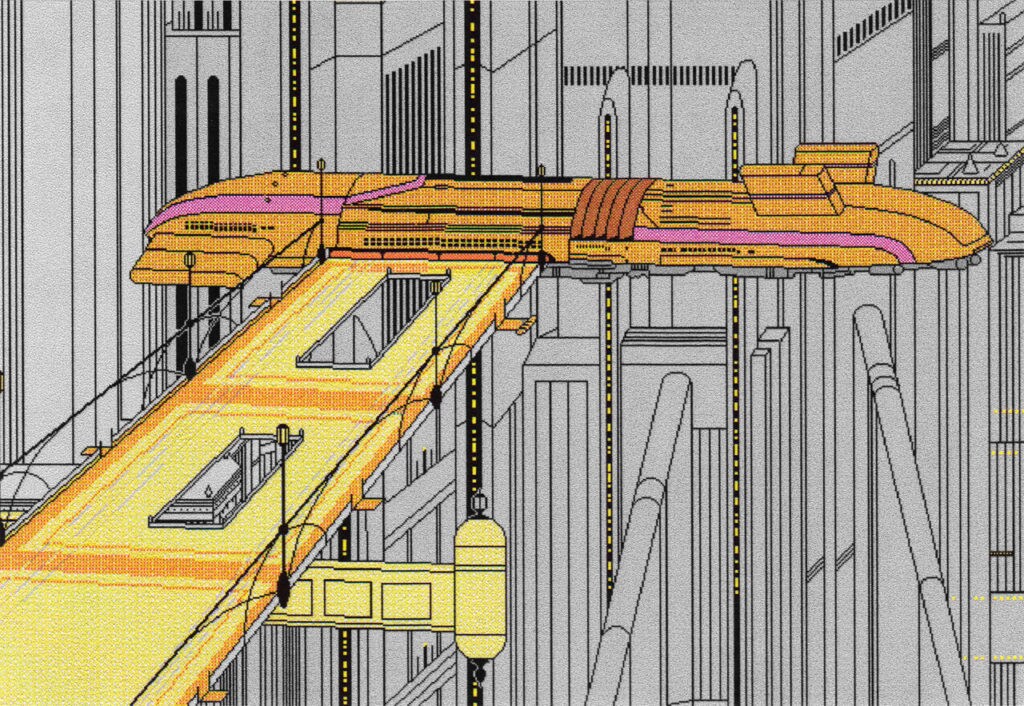 The brothers' first digital drawing — a ship docking on Coruscant — took about 16 hours to complete. They are convinced they took breaks to eat and sleep during the process. Later, the discovery of the copy and paste function would help them tear through multiple depictions of dogfights among the stars in a single day, on a quest to meet a self-imposed production rate of about one drawing per day.

“We kept a tally of how many we had done and we would calculate our average,” Robert says. “I remember talking about this. It was a weird obsession.”

“It was such an unhealthy obsession,” adds James. “What we should have done were like 30.” To meet quota, sometimes they rushed to produce several similar vehicle drawings.

At one point, a family computer upgrade forced them to install the outdated Paintbrush application to keep the look consistent. But their passion and their patience waned as The Phantom Menace hit theaters, the Internet allowed them to explore vast new reaches of the World Wide Web, and they left middle school behind.

“We stopped before entering high school, as one should with this type of thing,” James says.

At the height of their obsession, they printed copies for friends to showcase their skills and act as payment for those who loaned their precious comics as source material. “When we started running out of content, we started asking people to borrow comics. We rewarded them,” James says.

One friend was lucky enough to be bestowed with every one of their MSPaint creations. “Every morning we would come into school and we would give this to him,” James recalls.

“Then he probably went home and burned them,” Robert jokes. “If we hadn’t seen him for a month, we would have a stack of 30.” But the ever methodical brothers also kept a hard copy file as their own archive.

Unearthing the middle school artwork was an idea born half jokingly.

Robert was at first resistant, he says, “And somehow he convinced me over the next 20 minutes that we should do this.”

The kitschy throwback to late ‘90s adolescence seems to have tapped into the nostalgia of other millennial Star Wars fans and proven to be some fun for their own childhood friends who remember the brothers’ project.

They told some of their middle school peers about the blog through Facebook, and were surprised when two responded with cell phone photos of their own mementos from the Dastoli MSPaint archive. “They forgot to throw them out,” James jokes.

Much like the pre-teen project that started it all, the brothers did not skimp on time or effort in cataloguing their digital MSPaint archive, restoring and reformatting their work, then writing a description and backstory for every piece.“When we decide we’re going to do something, we go all in,” Robert says.

The images serve as a kind of reverent love letter to a bygone age of technology, youthful creations that so often border on the derivative, and a glimpse of their future given the care that was given to each line and bit of shading executed with patience and an imprecise mouse.

“You can see some of the innocence that’s there,” James says, that childhood excitement for creating something from the Star Wars saga was impossible to contain. “That certainly is visible.” 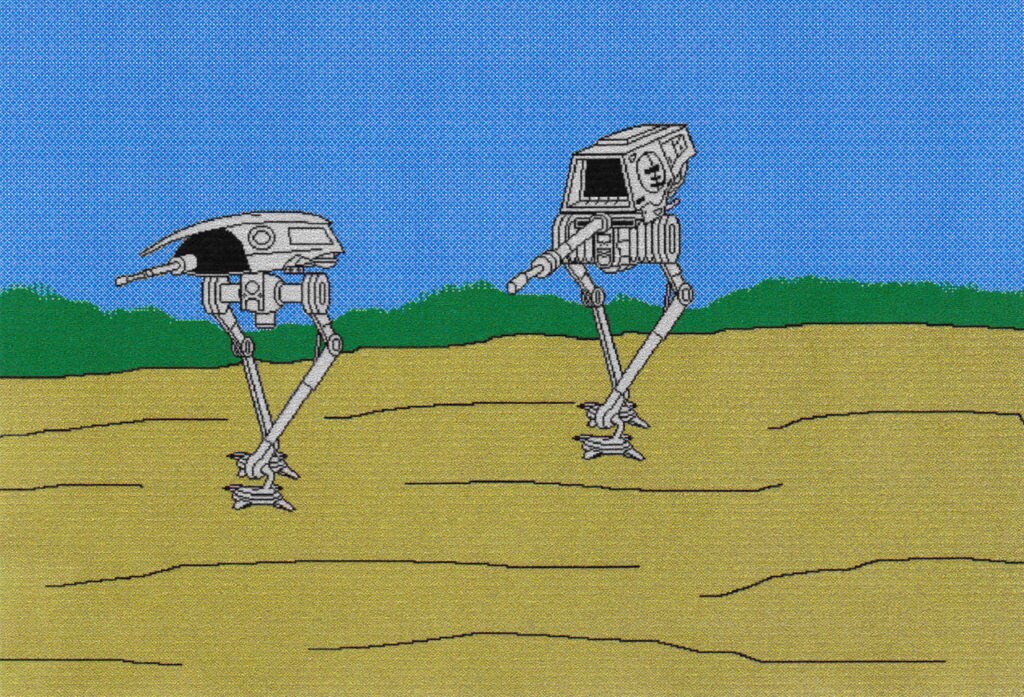 If Robert could advise their younger selves, he would have told them to cut it off at 50, not forge ahead to 700. And “when it stops being fun, quit.”

Now, their earliest digital artwork lives on online and in the seven hard copy volumes printed by Titouan Bordeau, a super fan of the Dastoli brand of fan work who happened upon the blog. Bordeau gifted one of the books to the brothers as thanks for giving him permission, harking back to the days when the young brothers would reward their friends' generosity with the same art.

“If you had told 12-year-old us that the thing we were making at that point would be featured on StarWars.com...” Robert starts.

“I can think of no greater goal that we would aspire to at that point,” James finishes.

You can view the full Star Wars Paintbrush catalog at http://starwarspaintbrush.tumblr.com.

James: Grand Admiral Thrawn has been my favorite character ever since reading Heir to the Empire. I think [Star Wars] Rebels did a good job of hinting at the epaulets with his costume, without him looking like he's in a marching band, so I'll say the Rebels likeness of him is my favorite.

Robert: Before the prequels I definitely would have said Obi-Wan-Kenobi because I am always drawn to the old wizard characters in franchises like this. The younger, prequel Obi-Wan doesn't have the same presence, so I think Han Solo is an overall better character.

James: The Empire Strikes Back is my favorite film as an adult. When I was a child, I would have said Return of the Jedi because the Battle of Endor was so impressive and Palpatine had such presence, but now I would give it to Empire because the interplay between Han and Leia is so good and that's the film that fleshes out Vader the best.

Robert: The Empire Strikes Back is my favorite movie of all time. This was not always true because as a kid; similar to James, I loved Return of the Jedi the best. The Battle of Endor played a big part in that, but I recognize now that The Empire Strikes Back is a better film and I think you can tell that Irvin Kirshner's insistence on making the best movie possible, regardless of budget and schedule problems, really paid off.

James: I remember watching A New Hope when I was eight years old and asking a lot of questions in the beginning, like "Who is that?" and "Where is this?" Maybe I was having trouble being thrown into Episode IV, or maybe I was just doing what all children do and asking a million questions about everything instead of just watching the movie.

Robert: I remember watching all three movies recorded on a VHS tape from some TV broadcast with commercials when we were eight years old. We rolled a TV into our bedroom to do this. I don't really remember exactly what my reaction was. Clearly I liked it, but I don't think I realized how big of an impact it had on me until months later, when we started getting almost nothing but Star Wars toys for Christmas.

James: My favorite scene is the confrontation in the carbon freezing chamber. That sequence is so dynamic in the way that it is lit, and the steam gives it such a great atmosphere.

Robert: The entire Battle of Endor is probably my favorite thing. There's just so much energy and it's just so fun. You can feel how big and important everything is. And it's such an incredible VFX masterpiece. Even when the fleet assembles before the battle, nothing is really happening, but it's still so exciting.

If you had to choose: join the rebels, or live the Imperial life?

James: I would definitely join the rebels because they get to wear the best jackets and personalize the graphics on their fighter helmets.

Robert: When playing Star Wars Armada or the old Rebellion CD-ROM game, I usually enjoyed being the Imperials more. But actually being a citizen of the Empire versus being a rebel freedom fighter? Maybe that would need to be clarified by the time period, because the novel Lost Stars does a good job of showing us that the Empire did some good on a lot of worlds, initially. But during the Galactic Civil War, the rebels seem to be enjoying life more.