Learn how one fan created a costume that would make Jabba proud...and is hard at work on bringing K-2SO to life at Star Wars Celebration 2017.

Jeremy Fisher was something of a celebrity at the 2016 San Diego Comi-Con, with his own wrangler in tow and the eyes of adoring fans lighting up as his wart-covered form came into view.

For months, the stop-motion animator -- who spends his days bringing action figures to life for the likes of Robot Chicken -- had spent his free time meticulously patterning foam parts using a beloved rancor toy as a miniature model. The end result was a hulking Star Wars cosplay that weighed in at 60 pounds, cost about $2,000 out of pocket -- a long way from his first homage using old milk jugs and home décor to fabricate Mandalorian armor complete with Wookiee scalps.

But don’t expect to see the beast from Dathomir at the 2017 Star Wars Celebration in Orlando.

Never one to avoid a new challenge (or drive a U-haul of rancor parts cross-country,) Fisher is now working to finish a life-size K-2SO that is sure to raise some eyebrows at TSA when he boards his flight from L.A.

The new costume is a departure from his rancor debut -- a squat 6-foot-wide, 7-foot-tall behemoth that swallowed him whole -- that still manages to use many of the tricks he gleaned from the process. To cosplay the beloved and pragmatic reprogrammed Imperial droid now on screens in Rogue One, Fisher is using a puppeteer’s approach that takes a page from The Phantom Menace playbook, donning a body suit to blend into the background and operate the character from behind.

Fisher will mount Kaytoo’s chest to his shoulders, his feet to his own, and use sticks to articulate the droid’s arms. “Otherwise you’re stuffing yourself into these skinny little legs and there’s not much room in there,” he says.

To understand Fisher’s drive to create one-of-a-kind cosplays from the Star Wars saga, just look back at his youth. Fisher first fell in love with the films from the cushioned seats inside The Senator Theatre in Baltimore as a 10-year-old experiencing the Special Editions for the first time on the big screen.

He built his own LEGO models of TIE fighters and X-wings by sifting through bins of hand-me-down basic blocks, then the precocious young artist met with the movie theater's house manager to see about getting his models on display in time for The Empire Strikes Back. This was a few years before the Danish block maker started selling specific Star Wars sets.

As Fisher got older, he dabbled in unique and to-scale Sculpey models when he needed key characters to complete his growing collection of action figures, but the manufacturers hadn’t quite caught up. “My collection was way too big for any kid,” he says. Soon he graduated into trying out his own stop-motion films with a child’s action camera, using his toys as the talent and the original trilogy as inspiration in a shot-for-shot remake of the cantina scene from A New Hope. It wasn’t until he watched a behind-the-scenes feature on one of those VHS tapes that he realized his passion could turn into a vocation.

In the five years he’s worked professionally in animation, technology has changed the day-to-day work of filming, but the feeling of being a part of the process never gets old. “There’s still a certain magic to it,” Fisher says. “You’re still seeing a static object that, through the process of time and your hand, looks like a moving, breathing thing on the screen.”

Into the rancor pit 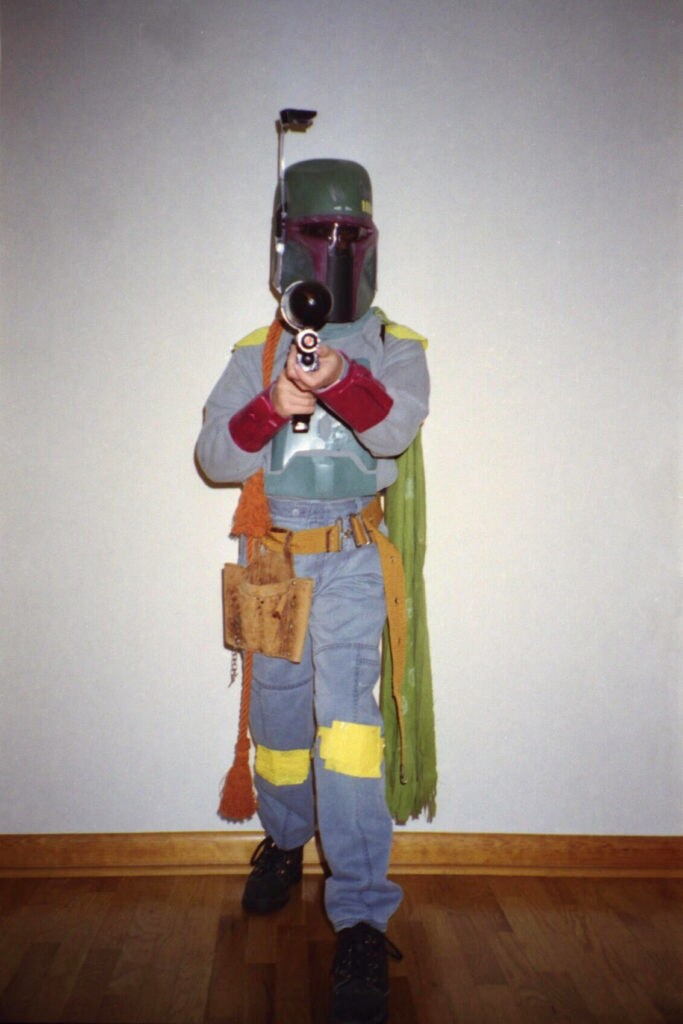 In 1997, Fisher’s mother found a rubber Boba Fett mask in time for Halloween, setting into motion a future love of Star Wars cosplay. The only problem: “I didn’t have anything to go with it,” Fisher says. The ever-resourceful Fisher used salvaged cardboard and cut up milk jugs to fashion armor and attach it to some old sweats. His mother graciously sacrificed her curtain tassels to stand in as Wookiee scalps. Then he painted an old squirt gun black for his trusty blaster and hit the trick-or-treating circuit outside York, Pennsylvania. “Getting to walk around with that and go door to door was the icing on the cake.”

Fisher dabbled in other costumes over the years, but it wasn’t until he challenged himself to bring the ‘90s cartoon character Powdered Toast Man to life for L.A.’s Comikaze Expo in 2014 that he realized the reaction he could elicit with his creature creations. Fans, spotting him from across the convention floor, sprinted to get closer. “‘I can’t believe you’re here! You’re my favorite character!’” they told him. “People were freaking out and hyperventilating because you’re there in the flesh," he says. "It really tapped into something. And all I did was put together this costume.”

For his next project, Fisher knew he wanted to put his own unique spin on paying homage to Star Wars. The scenes from Jabba’s palace in Return of the Jedi had always been among his favorites and he knew the creative team had settled on using a puppet in the film only after playing around with an actor in a suit. Could he succeed at the task himself? “This would be so cool to see this life size,” he thought. “You get this idea and you can’t let go of it.” 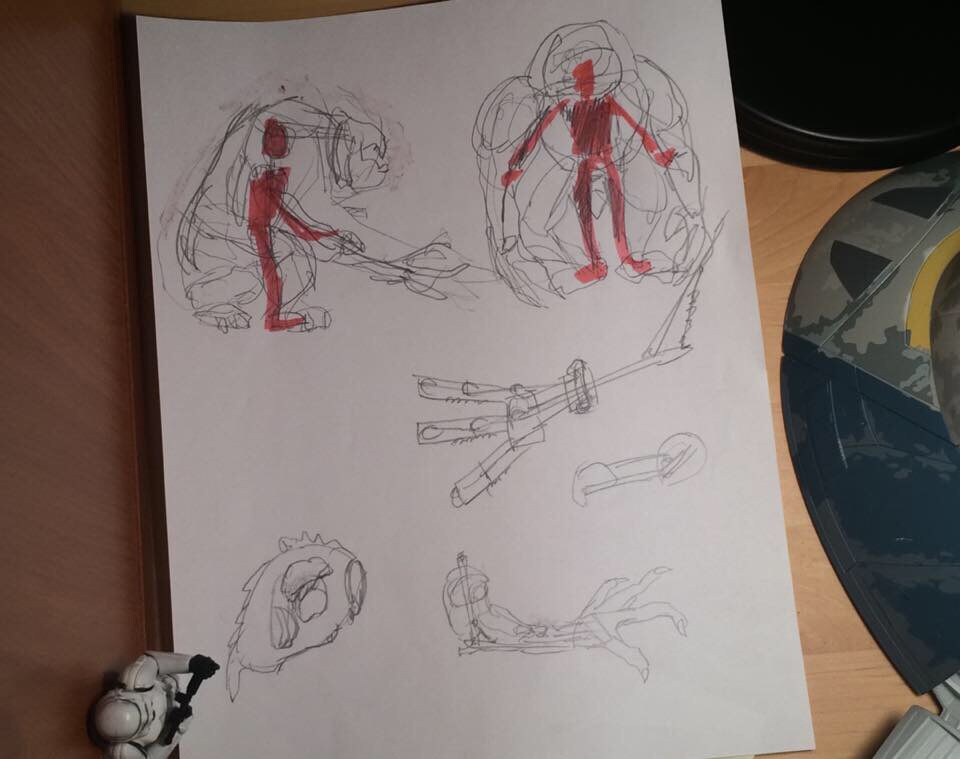 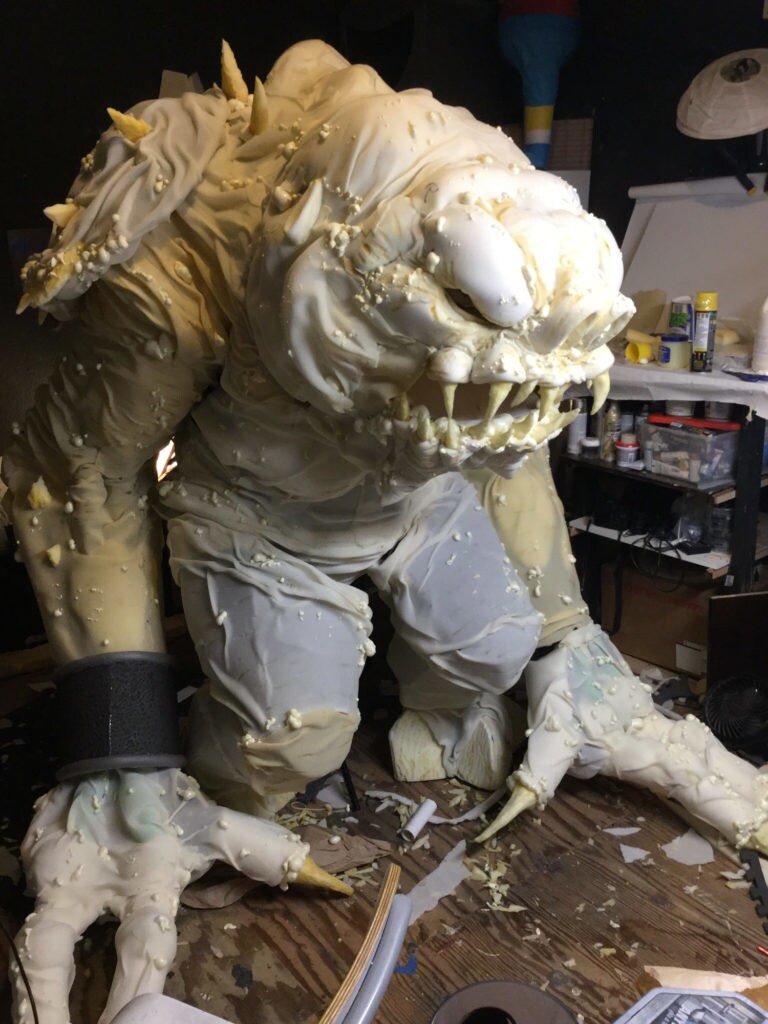 Using Phil Tippet and Dennis Murex’s design as an inspiration, he got to work logging hours of research, studying other big costumes cosplayers had produced for tips on engineering something of this magnitude that would also be wearable, breathable, and light enough to walk around in. He took courses at Stan Winston School of Character Arts and got some guidance from Frank Ippolito, the famed props master who debuted his own rancor costume in 2015 just as Fisher was working on his own.

Fisher’s rancor took him a year and $2,000 worth of the “cheapest, safest, easiest to work with materials” to complete. Sometimes it also left him questioning his sanity. “This is taking up my whole studio space. It’s one thing to draw pictures but to actually start pulling this together...This arm is as tall as me if not taller!” he thought. “What am I doing?” 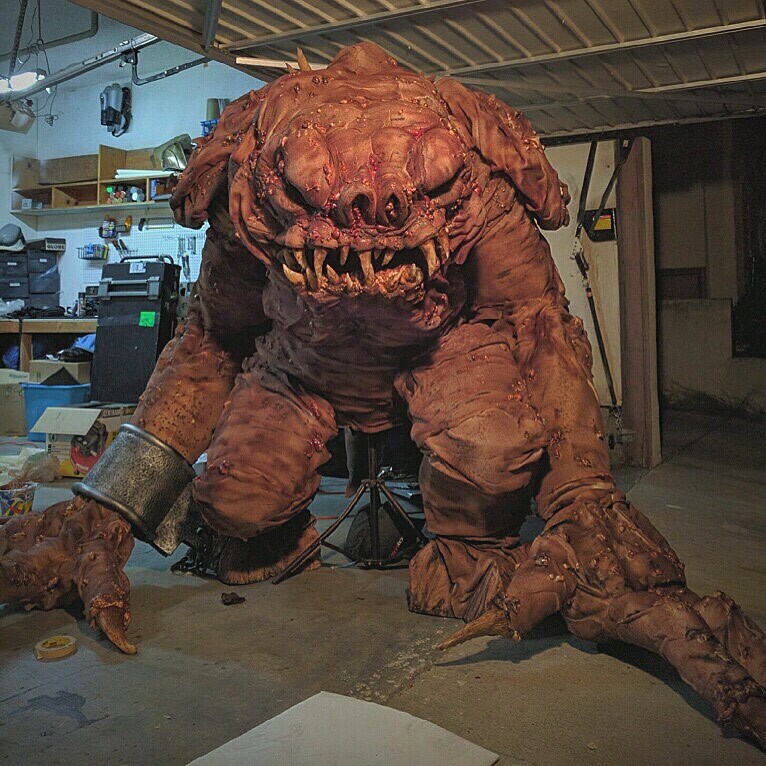 Fisher, standing 5’7”, fashioned a PVC pipe skeleton with a metal army backpack frame to support the head and shoulders hovering over his own. A series of about a dozen pieces created from different types of foam -- EVA used for floor tiles as the base muscles, thin rolls of cushion padding for the wrinkled skin, and expanding spray foam used for insulation to create the warts -- join together to fully encase him in the beast.

Along the way, Fisher figured out engineering shortcuts to keep costs down, like using a dollar store hula hoop at the neck and plastic buckles from backpack straps to attach the interlocking parts. “So much of it is attached with these weird little quirks and tricks.” Computer fans power a cooling system to keep air circulating inside, although the beast’s moving jaw allows Fisher to gulp in some fresh air. And quake gel, used to secure glass and other breakables in museums and curio cabinets, is the perfect consistency for the rivulets of slobber dripping from the rancor’s mouth. “It’s another little trick from stop-motion. If a character gets hit with a cream pie, we’ll take this gel and mix it with a little bit of clay. And it reacts to heat so as the day progresses it just gets more and more liquidy and looks like drool.” But taking the massive costume on the road costs about $200 for a 9-foot U-haul trailer or two very understanding Uber drivers, and requires the help of friends and family to get him into the suit. So with the new film coming out, Fisher started to think, “OK, what if I do something that’s not as crazy.”

Back to the original world

With the 20-inch Big Fig as his guide, Fisher applied some of the same techniques and logic he gleaned from the rancor suit to bring K-2SO, the staggeringly tall reprogrammed Imperial droid from Rogue One, to life. He began working on the character well before seeing the film and even before the toys had been released. “I just liked his overall look,” Fisher says. “He’s very much in the original world of Star Wars.”

Primarily utilizing EVA foam for the metal components, he’s hoping he can keep his costs down to a fraction of his last project. “This one will be a lot cheaper, $400-500, if I do right.”

When we spoke with Fisher, he was still in the early stages of the process, patterning his toy counterparts, using the computer to upscale the pieces, and troubleshooting the logistics.

With the rancor build, his biggest challenges were staying focused and motivated and creating something that looked organic, living, and breathing. This time, the onus is on taking a computer-generated character and making it a reality with an eye toward having the costume ready to debut in Florida in April.

“How can I take this CG character that wasn’t made in real life and make something that is actualized and realistic, wearable but also not too uncomfortable or too unwieldy, and that can fit on a plane?”

Keep an eye out on the convention floor at Star Wars Celebration to see Fisher's roving, reprogrammed security unit brought to life.

It used to be Boba Fett through my childhood. He was the coolest-looking guy with so much mystery behind every line of dialog (even though his "demise" was a little comical). More recently, it's been Han Solo since he's the most relatable space cowboy with the fastest ship in the galaxy. He doesn't need the Force to get himself out of hairy situations, just a hairy best friend!

The Empire Strikes Back, although I've been watching Rogue One and Force Awakens a lot recently.  I just loved the story, new characters, action, and, of course, the earth-shattering reveal. It took a lot of guts to end on a darker note than A New Hope.

I was hooked from the moment I saw A New Hope when it was rereleased for the Special Editions.

That's a tough one, it changes every year or so. Recently I've been really attached to Luke's "I am a Jedi, like my father before me" line and his rejection of the Emperor's offer. It's super-powerful to me and shows the importance of standing up for your convictions, even against impossible odds.

I wish I could say I would side with the rebels just on principle, but Imperials have the coolest ships, uniforms, and gear in the galaxy...well, besides the bounty hunters. Maybe I would be a bounty hunter and secretly be a rebel agent. That counts, right?