Most Impressive Fans: The Story of What May Be the First Darth Vader Cosplay

Sean Schoenke talks to StarWars.com about crafting his own Sith armor in 1977.

The Dark Lord of the Sith was quietly pleased with Luke's lightsaber building skills, but we're confident he would have kneeled before Sean's full-armored homage.

What makes this cosplay so impressive? It was crafted over one week in the summer of 1977 — long before the internet’s hi-resolution reference photos, screen-accurate kits, or even a home VHS with a pause button.

Sean's family snapped a photo in his teenage bedroom, gloved hands on hips as he proudly stood before posters George Harrison and Paul McCartney and Wings.

But after he wore the getup to a friend’s Star Wars-themed birthday bash, he was on to the next project. His mother tucked the photo into an album along with the rest of the memories. The costume was boxed up, then eventually got tossed out or left behind as he moved from St. Louis to Los Angeles in 1979. “Somewhere in the midst of that, it didn’t make the trip.”

And although his love for Star Wars, filmmaking, and costuming never waned, his dalliance with the dark side was largely forgotten.

Sean, now 58, recently pulled the faded photograph from the annals of family history, giving his own son Aaron an idea.

The 32-year-old mocked up some text celebrating his father as “the first person to cosplay Darth Vader” — a title under some dispute since Sean doesn’t actually consider himself a cosplayer and there’s no telling how many homemade Siths were springing up at the time.

“He just dropped it online, but he didn’t tell me,” Sean says.

But the Internet responded.

Sean just thought he was privately sharing a memory of one of the first costumes he ever crafted. But the meme, with social media support from their production company Bat in the Sun, was shared over 10,000 times and has about 200,000 views between the various pages that shared and posted it, Aaron says.

“I don’t do social media,” Sean admits. “I really don’t follow anybody or post things, but Aaron does quite often and he’s always updating me. 'Here’s what they’re saying!' I’m just tickled pink about it. It just kind of gives me a warm little glow that...after some 40 years now it’s finally being seen.”

Late to the party

Sean considered himself a latecomer to Star Wars fandom when he saw the film in theaters in 1977.

“It was like two weeks after the release date that I finally got to it,” he says. “But back then there was no pre-hype and all the media that we have today. When it actually came out in the theaters, a lot of my friends were like ‘what is Star Wars’?” Nobody really knew what it was about or what to expect.”

The college freshman had spotted the marquee on his drive to work at the Record Bar, a now defunct chain that once had storefronts all over the midwest. But it was word-of-mouth that finally convinced Sean and some of his friends from work to get tickets. “I was like the only one who hadn’t seen it,” he says.

He still remembers sitting in the theater, the opening scroll playing over the booming score.

“We saw the opening scene with the Star Destroyer coming overhead and you could just tell at that moment something special had happened.”

Sean went back to experience Star Wars in theaters 14 times that first summer. “I had to fill up because I never knew when I was going to see it again,” Sean says. “I think it was that way for everybody. Everybody just wanted to keep seeing it and seeing it because they didn’t know when they would actually have a chance again. There was no other place to see it at the time.”

It was around the end of that summer that some of his friends from the store were having a Star Wars-themed birthday party, and Sean had an idea. “I was going to surprise everybody and show up in the Darth Vader outfit. It was just about out of the theaters. By that time, I’d seen it enough times. I could make me an outfit.”

A drape for a cape and a little spray paint

He'd previously sewn himself a Sgt. Pepper-style jacket to sit tenth row at a George Harrison concert, and he'd made other costumes, including a Robin outfit, for his younger brother. “I was good with my hands and making things. I’m always building things, so it was really easy for me to just dive in,” he says. 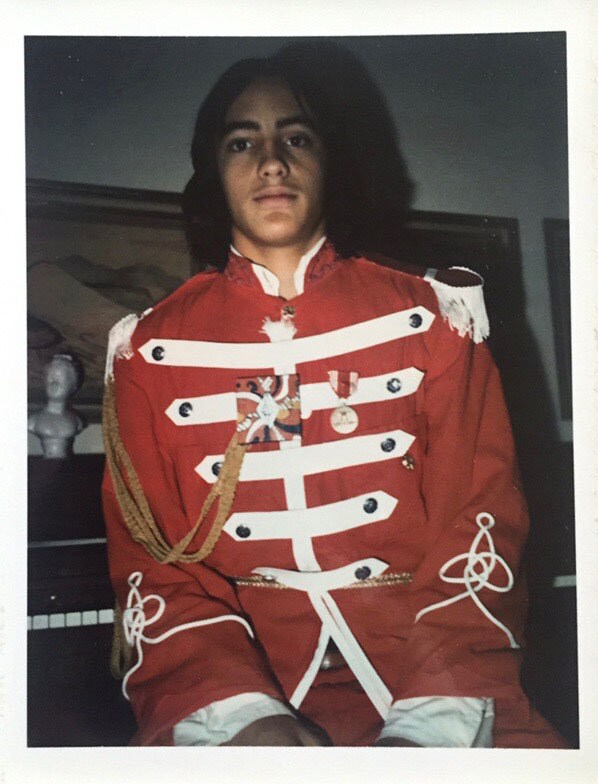 Sean scoured through magazines, newspaper clippings, and used the soundtrack LP cover as guidance. “I had to be creative with my resources, with what was available. Wherever I could find a picture, a close-up of Vader’s face mask because it was very intricate and unique,” he says.

For materials, he used mostly items he found lying around his house. His black cape? “That was actually a drape, like a curtain. I just had it around the house and it was like, 'Great! This is my cape!'”

He went to the hardware store for small lightbulbs and a battery, then wired up a rough facsimile of Vader's chest plate. To bulk up his frame, the then 18-year-old added a black jacket underneath it. “I think I’m wearing the jacket backwards,” he says. The lenses came from a pair of sunglasses he broke apart and sacrificed to the project.“The helmet, I think we had. I think it was some kind of army helmet” that just needed a few tweaks to the back.

With some clay and tiny slats of wood, Sean formed the angular details of Vader's mask, “then once I sanded it down and spray-painted it black, it was good enough to wear,” he says. “You’d be surprised -- black spray paint can cover a lot of the imperfections.”

The whole project took about a week. “I don’t remember slaving over it too long to make it,” Sean says. “I probably just worked on it every day until it was done.”

Sean's costume wasn't screen-accurate, but that wasn't the point.

“It’s homemade, but it looked close enough that when people saw it….they get it. I’m even amazed that I made it myself when I look back at that picture. I don’t think there was anything like that.”

And his friends loved his debut. “It was a hit. It really was a big hit with my friends at the party. It wouldn’t stand up to today’s outfits out there. But at the time it was fun, adventurous.”

Sean never wore the get-up again, except maybe to quickly show it off to a visitor. “I think it just sat in my room,” he says. “After the party, I don’t know what became of the outfit because I don’t have it anymore. I was onto another project. I guess I was kind of at the start of cosplayers, but I’m more of a creator. I like to make things. I’ve never been a cosplayer even back then. I didn’t stop to reflect on how kind of cool it was until really recently.”

Revenge of the Sith

Sean did get to revisit his love of the Dark Lord not long ago.

The father-son duo spend their days running Bat in the Sun productions, an audio/visual company in L.A. that stages epic battles between some of pop culture's favorite heroes and villains using film-quality special effects and a lot of decidedly not canon “what if” scenarios. Aaron directs, while Sean helps with sound, music and special effects.

For the video featuring the Sith Lord, Sean used his artistic skill to craft a blown-apart version of Vader's mask so they wouldn't harm the more expensive, screen-accurate suit being used in the rest of the sequence.

But this time, Sean had a cheap plastic version of the helmet to use as his base, and plenty of hi-res images online to work from.

And as Vader himself said: The circle is complete.

It would have to be Han Solo. Because when Princess Leia called him a scoundrel, he replied, “There aren't enough scoundrels in your life.” How could you not like a character like that?

The original Star Wars before it became A New Hope, because that's where it all began with me. You could say that was for many people the big bang where it all started. Also, the movie wrapped up nicely with medals and a heroic ceremony. At that moment, it seemed all was right with the universe and the Force.

My first Stars Wars memory is literally seeing the name of the movie on the marquee at my local theater in the summer of '77 and wondering what all the instant buzz was about.

My favorite scene is in A New Hope when Han Solo is in the detention area trying to explain over the intercom what's going on. "We're all fine. How are you?"

As a musician, I would rather join the rebels and compose music to inspire faith and hope. The Imperial Empire might censor my music.