In this exclusive first look, go inside the popular photographer's clever poster recreations -- featuring his family as the heroes and villains of The Last Jedi.

At four, Josh Rossi's daughter Nellee is already a pro at striking an action-hero pose, right down to the very serious expression it takes to become a Jakku scavenger just starting her Jedi training.

So turning the little girl into Rey for the family's epic The Last Jedi Christmas card this year was no problem. As usual, it was Kylo Ren that was causing all the trouble, Rossi says.

Nellee's toddler brother, Josh Jr., was perfect for the role. “He's a little hellion that doesn't sleep,” Rossi says. But the pint-sized dark warrior literally needed some extra support to keep him upright and standing while Rossi aimed his lens. “He was having the most issues because he can barely walk...It’s pretty insane working with kids but we somehow make it work. Photoshop is my friend.” 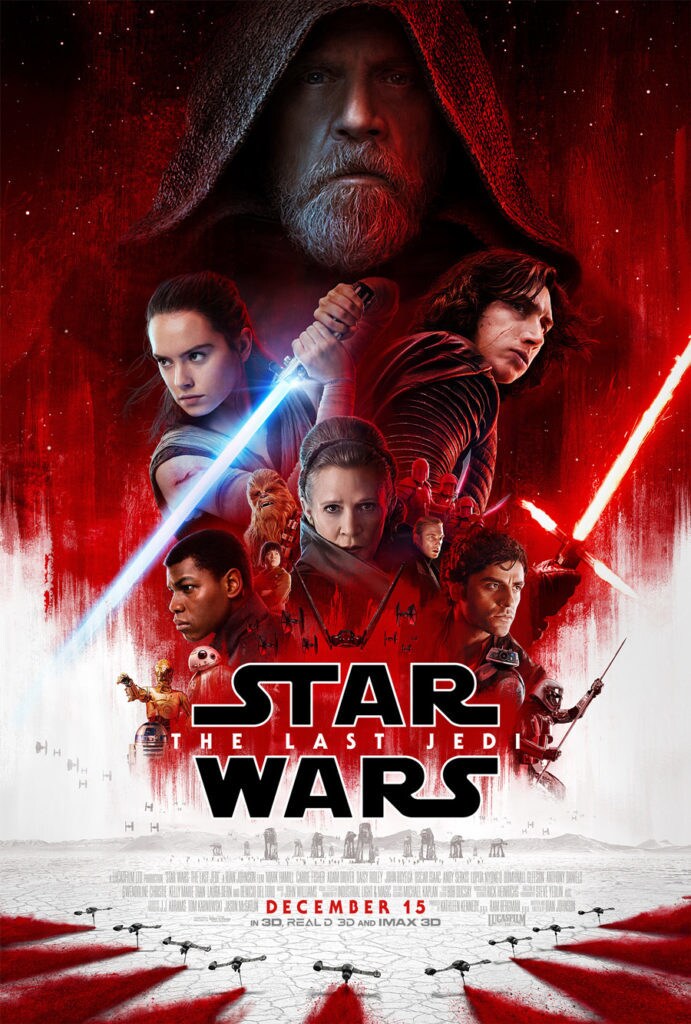 For two weeks after the family photo shoot, Rossi worked diligently to digitally alter the raw footage and turn his family into a perfect homage to Episode VIII, with his children in the starring roles.

The Salt Lake City father and commercial photographer sat down with StarWars.com to offer an exclusive first look at his finished The Last Jedi photos, and to talk about building X-wing fighters in his parents' garage, learning how to illustrate the visions in his mind, and casting his daughter and other brave children in the most heroic light.

More powerful than you can possibly imagine

It all started with Wonder Woman, when Rossi made gifted his daughter a custom costume and a photo shoot that showed her ready for battle. Soon after, he turned her in Belle from Beauty and the Beast for a special father-daughter Valentine's Day shoot and enlisted some brave kids battling cancer and other life-threatening conditions to become the Justice League.

For Rossi, it was important to give the children who participated a reminder of their resilience with a portrait that celebrated their strength and got them out of their hospital beds, if only for a short time.

For his latest project, Rossi's Star Wars-inspired series is all about family. “I always thought, 'How can I make an impact with my art?' And I think just by showing our family and my daughter and the things you can do together, it’s inspired a lot of people.”

In other words, please do try this at home.

For Rossi's homage to Rian Johnson's upcoming installment in the Star Wars saga, he cast his wife Roxana as the formidable General Leia, and himself as exiled Jedi Master Luke. “And then obviously Nellee was going to be Rey because she’s the most powerful, kick-butt of them all. It fits perfectly...And then, sadly, we had to put Josh Jr. as Kylo.”

Rossi laughs off any implications that the casting choice might put him in danger, as young Kylo Ren's dad. “I made my kid Kylo!” he says. “But when he grows up he’ll probably turn into a nice guy.” 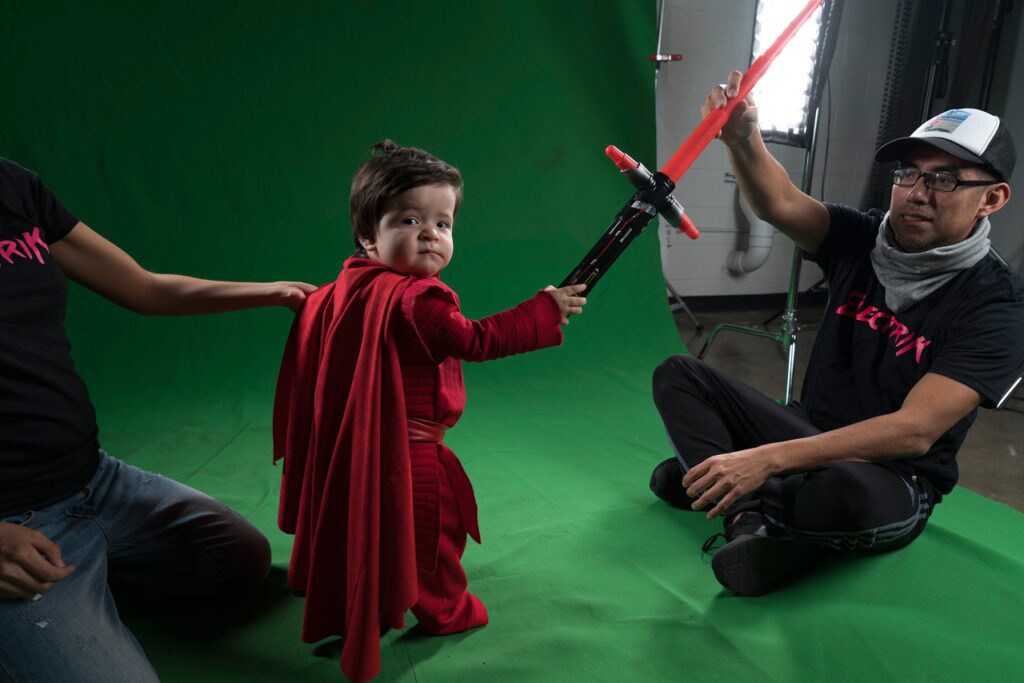 Rossi's friend and frequent collaborator, Julie Whiteley, donated her time to craft the family's costumes, stitching them as close to screen-accurate as they could be. The fabric alone cost about $500, Rossi says. But to get Nellee into character, it's important that she really feels like Rey. “It can’t be a cheesy outfit....All these are custom made to fit her and that totally gets her in the zone. She wears them for months after the photo shoot.”

He kept the entire project to a budget of $1,500, spending two weeks after the initial photo shoot using his artistic skills to craft the final series. With the help of several raw images, Rossi created a composite shot, using his daughter's face from one photo, her body from another, and moving his toddler's arm until it was just right. But the lop-sided, chubby-cheeked scowl of the former Ben Solo? All natural. 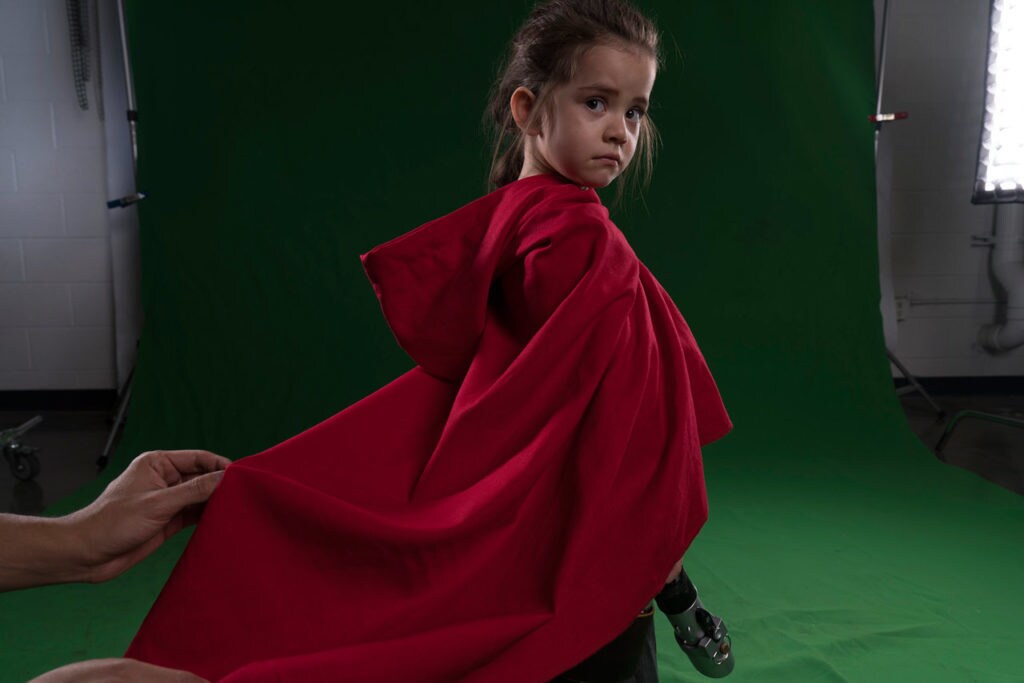 For the adults, Rossi tweaked their features and used his digital paintbrush to brighten and alter the colors to match the official movie poster that inspired the tribute.

Rossi considers it a cheat to use another digital artist's creations to supplement his work, so even when he struggled for days to get Kylo Ren's lightsaber looking perfectly unstable, he never considered just snipping the elegant weapon from the real poster.

“I can’t do that because that’s just using somebody else’s work,” he says. “It’s not just a straight lightsaber. It looks like plasma or something like that. So that was difficult to create,” Rossi says. “I sat for like two days thinking, 'Man, how do I create that look?'” Ultimately, he used a hair-like brush for the effect, a throwback to his earliest days as a digital designer. “Stuff like that I learned at the beginning when I couldn’t create my ideas, so I had to figure out ways to do it.”

Rossi was born in Florence, Italy, a “city of artists, city of the Renaissance,” he says, so creativity is in his blood. As a child, he and his friends were instant Star Wars fans. They watched the movies, played games based on the Star Wars galaxy, and even made up their own adventures at recess. “That was probably my most nerdy moment,” Rossi says. From the start, Star Wars carried an emotional weight and important messages about family for the young Rossi. “As an adult, you get so consumed with work and other stuff that you forget. Until the movie comes out again, then you remember all those emotions. I was the biggest fan; I still am.”

As a kid, an obsession with the X-wing led him to making his own starfighters in the family garage. “I would create these cardboard planes that looked like X-wings,” he says, keeping them together with a generous amount of duct tape. Some were big enough to climb inside. After a foray into film production as a young adult, Rossi moved on to study advertising design. “I wanted to be more creative. I wanted to have more control over everything...and that led me to advertising where my ideas would get created. But then advertising also led me to photography and creating this style of work....I had these ideas in my head but I was always limited. Slowly, slowly, I started figuring out ways I could create that. Like how do I shoot the underside of a car without a budget, without a huge crane...so I’ve had to figure that out in Photoshop.”

Once the kids came along, his passion for photography and digital design made for a welcome reprieve from the usual day-to-day craziness of parenting, as well as a way to immortalize their childhood with a family photo album like no other. “You’re barely surviving,” he says, laughing. “So to slow down and do these fun projects...It’s awesome for future memories.” 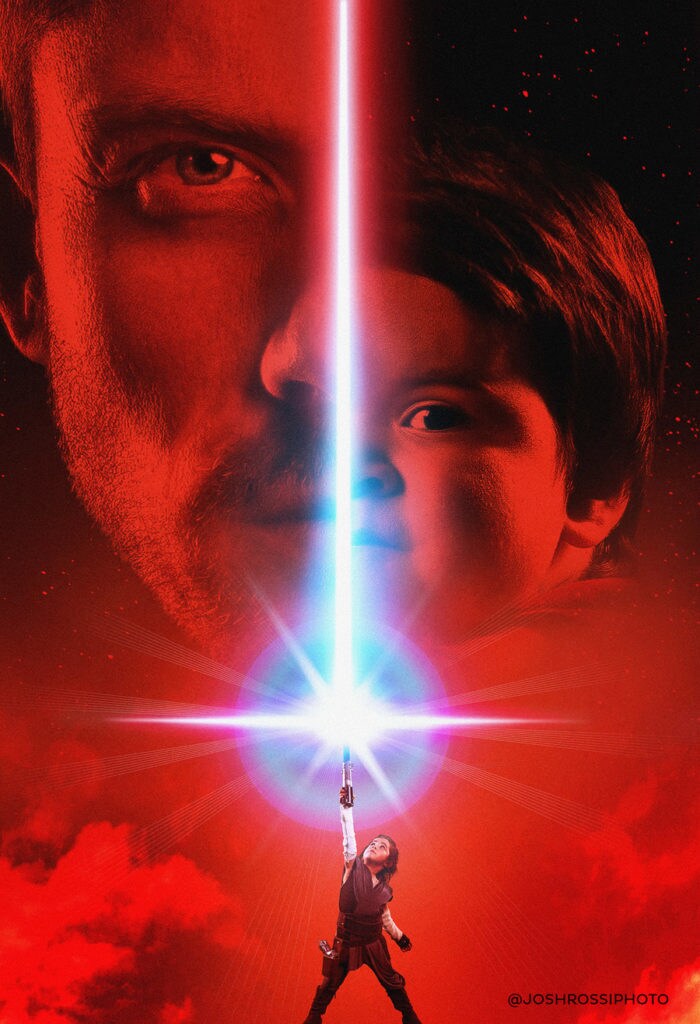 And while his earlier projects were intended to empower his daughter and other children, when it comes to his Star Wars project, the goal was different. “This one was mainly based around family," he says.