Hear from the Star Wars faithful on which characters and moments resonated with them most.

It's been over a month since Rogue One became part of the Star Wars universe. Fans have watched the movie, rewatched it, processed, grieved, and added the story of Jyn Erso and her cohorts to the big picture. How did the first stand-alone film change the status quo? What kind of impact did it have? I asked fans how Rogue One made a difference, which moments hit the hardest, and more.

Several fans replied to me and discussed how much the ethnic diversity in the film touched them. Ruben Borges says he was impressed to see the range of characters and their strength. He saw himself in the film and says the presence of minorities made him embrace the story more. Borges adds Rogue One didn't necessarily change of his view of the entire Star Wars saga, but some scenes did add depth: "It made me understand Vader as a human being more, even if a terrible one."

Kim Harrington found that Rogue One enhanced all the films. She tells me, "By showing the sacrifices the team made to get the plans for the Death Star, [Rogue One] adds a weight to the entire saga. A somber one, but also realistic. In war, not everyone survives. Sacrifices are made. Lives are lost. And by delving deep into the characters’ motivations and backstories, we are made to care about them. Which makes that eventual cost feel even more significant. They are no longer nameless rebels who completed a mission. They were people who gave the Rebellion a new hope."

The sacrifice of the rebel spies landed close to the heart for many fans, as did seeing more of the horrors of the Death Star. Adam Levermore has seen Rogue One five times so far, and he says the film made the weapon more frightening. "The Death Star went from being an abstract 'technological terror' to a truly horrifying weapon of mass destruction. In A New Hope, we never see the millions of voices who cry out in terror on Alderaan, and even Princess Leia's reaction is somewhat muted. In Rogue One, we spend time with people -- like the young girl that Jyn saves during the stormtrooper skirmish on Jedha -- who eventually are incinerated by the super laser."

Rogue One showed the power and destruction of the battle station twice and each blast was dreadful. It was hard not to play "what if" and wonder what would have happened to the galaxy if the rebels failed on Scarif. The opening crawl of A New Hope came to life. Connie Shih says, ""Before Rogue One, I took the crawl for granted and did not fully appreciate its significance. It carries more weight now that I know the backstory and the amount of sacrifice it took to steal the Death Star plans from the Empire."

She also says the new release changed her thoughts on the Rebellion: "Rogue One has given the Rebel Alliance both added complexity and darker motivations that weren’t present in my earlier perceptions of the Alliance from the original trilogy."

Shih's not the only one with a changed view of the Rebel Alliance. John Gregory tells me, "The one-dimensional goodie-goodie Rebellion was shown to have so many layers to achieve their goal of taking down Empire even at the cost of innocent lives."

Mike Gauthier was surprised by the bit of darkness he saw in the Rebellion, but he came around. "I was initially taken aback by and, quite frankly, borderline rejected the Rebel Alliance being portrayed as anything besides squeaky clean and innately 'good.' However, this ultimately became one of my favorite parts of the movie. The Rogue One portrayal shows a grittier, morally flexible and dirtier Rebel Alliance than in previous versions, which gives it more depth and humanity. Each of the main characters are seeking some type of redemption after being morally polluted in their struggle against the Empire, which I feel is a more realistic portrayal of the affects a nearly two-decade rebellion would have on a person, than had been previously shown on screen, " he says.

Rogue One added to what we know about the Empire, as well. AJ Moser says what he learned from the Battle of Scarif and other Imperial scenes in the film alter Episode IV for him: "Rogue One fundamentally changed the scenes featuring the Empire in A New Hope for me. Typically when I would watch that film, I was the most interested in Luke’s story and the allure of the Jedi. But now the opening sequence is much more thrilling, realizing it directly follows the battle above Scarif, and the conference room scene holds more weight knowing that the Empire is reeling from a significant loss against the rebels. Interactions between Leia, Tarkin, and Vader hold even more significance thanks to Rogue One."

Though the story of Rogue One had galactic stakes, it was also focused on the individual characters and their contributions. Many fans shared tearful reactions with me. Corey Stockwell says, "On the first watch, I teared up when K-2SO met his fate. During the second viewing, I teared up at the ingenuity of the rebels when the Hammerhead Corvette came into play. During the third time, I teared up during Jyn and Cassian’s ending when I realized that the rebels met their end after their mission had been accomplished. On the last one, I openly wept when Leia came on the screen."

Kaytoo made many viewers' tear ducts leak, but it was far from the only heartbreaking scene. Walt's description of what made him emotional makes me teary-eyed. He says, "I was most touched by the scene when Jyn and Cassian ride the elevator down after transmitting the plans. They just look at each other, no words are exchanged -- only Michael Giacchino's beautiful score is heard -- and they know it is the end for them. No tears, no hysterics, just acceptance. And just like Chewie, there will be no medal for them, but unlike our favorite Wookiee, they won't know of their success. That's a downer, yet it's beautifully filmed."

Those moments wouldn't elicit such strong reactions if moviegoers weren't attached to the characters, and fans shared a range of names as their favorites. Chirrut and Cassian Andor came up repeatedly. Chris Fotenos explains why he admires Chirrut: "To have that much faith in the Force in a seemingly post-Jedi world, while blind nonetheless, showed tremendous strength. Not to mention the whole stormtrooper beat down -- undoubtedly one of the coolest scenes in the saga. I even love his introductory scene where he comes off as kind of a crazy wizard. He was well played by Donnie Yen."

And as for Cassian, Laura Stanley tells me why he's the best: "I think he is so conflicted and that really made the Rebellion feel real to me. Not all the good guys are as wholesome as Luke Skywalker, but I think Cassian wants to be. For someone so disillusioned and disheartened by the growth of the Empire to be so instrumental in the Death Star's downfall is such a moment of quiet triumph. Also Cassian gets the best line -- 'Rebellions are built on hope.'"

On the opposite side, Jackson Branch names Director Krennic as his favorite. "While he wasn't really a hero in the movie, I really admired the aspirations he had with the Death Star project. He was determined to be successful, no matter what it took. This appreciation was heightened after reading Catalyst and seeing how long he had been working on this project without relenting," he explains. 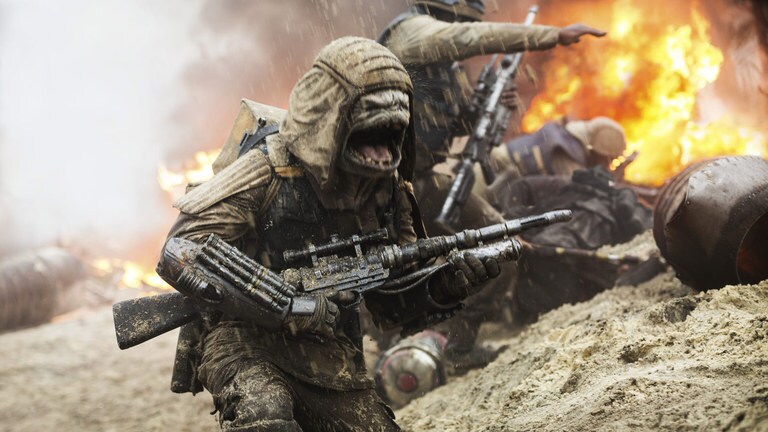 Finally, I received a unique perspective from actor Derek Arnold. He played Pao, one of the feisty rebels who accompanied Jyn to Scarif. Arnold fell in love with Star Wars as a teenager, and he says playing a creature in Rogue One changed his point of view. He says, "I've seen the huge amount of effort, time, and artistry that goes into creating every scene. The months of preparation that goes into bringing life to just one of the creatures is staggering. Not only does it affect the way I re-watch the previous Star Wars movies but all movies. I take the time to appreciate every aspect and I always make a point of sitting through all of the post credits now, it's incredibly important to the thousands of people who weren't seen on screen and I think people forget it's still a part of the movie and experience."

The most emotional moment for him? He says it changes with each viewing, but most recently: "I'd say Baze's last moment with Chirrut, that definitely pulls on the heart strings. Or when Cassian tells Jyn, 'I've been in this fight since I was six years old.' That whole dialogue back and forth between them on the ship is great."

What about Rogue One impacted you the most? Tell us in the comments.