See how one Star Wars fan and her dad made the coolest bedroom in the galaxy.

Emmie has the kind of bedroom Star Wars fans dream about when they cuddle up with their rancor plushes at night (everyone does that... right?). The 10-year-old's galactically decorated room came to my attention through her dad on Twitter. I shouldn't be envious because I am more or less an adult, but I couldn't help but be dazzled by the pink and purple accents, a TIE fighter desk, the wampa rug, and more. It's like she took a Star Wars decorating 101 class. 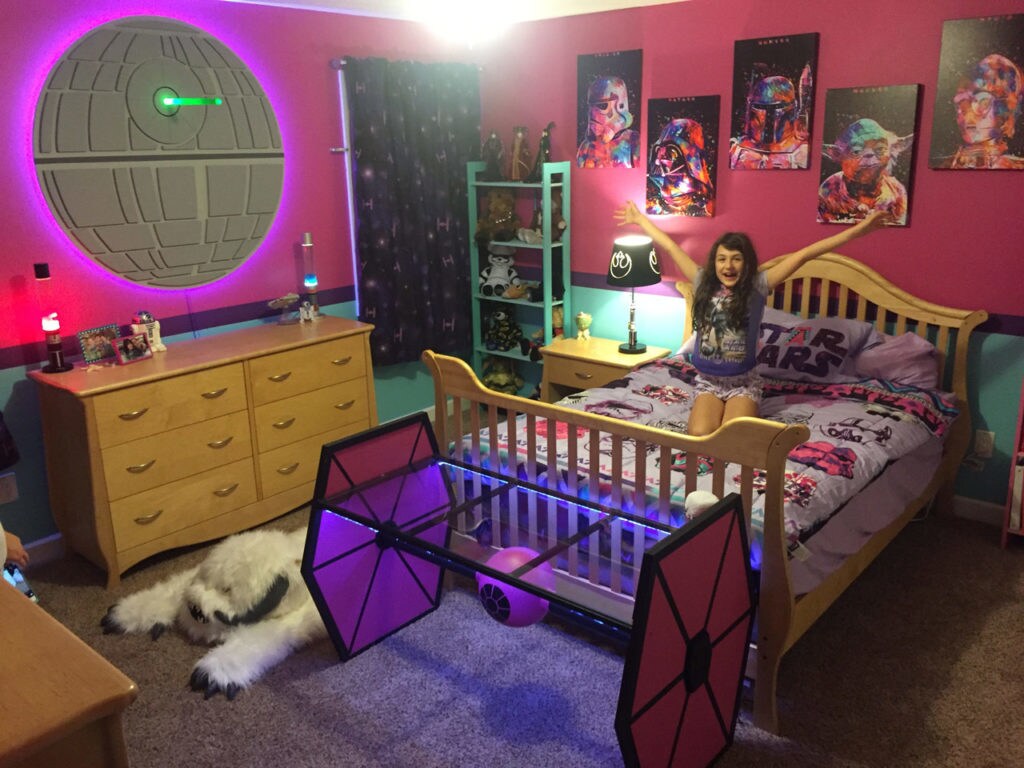 I worked with Emmie's father Scott to get some answers from Emmie about her epic bedroom. She told me she first saw A New Hope when she was six years old. "I loved it! I had really never seen a sci-fi movie and I just loved it! The characters were just so fun to watch," Emmie says.

As you look over photos of the room, you might notice a theme. The accents are intentionally Imperial. Emmie put it matter of factly: "EMPIRE!" She continues, "I have everything Empire because I think Darth Vader is awesome." I respect that she's not afraid of being clear about her allegiance and proudly stands by Darth Vader. 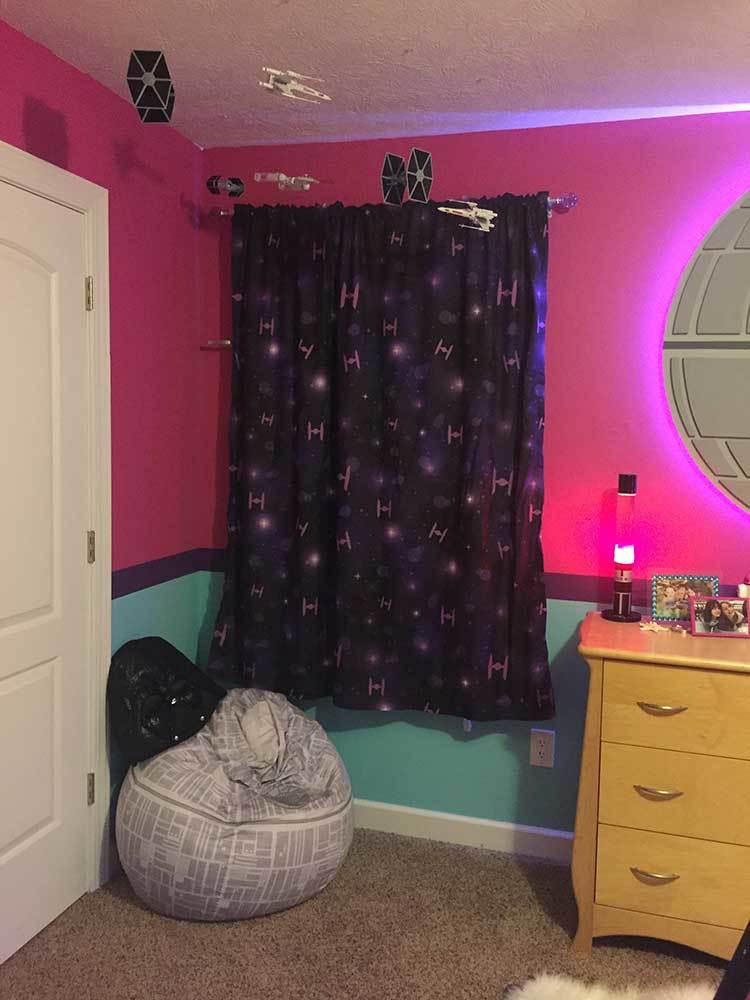 The room blends together merchandise you can purchase from vendors such as ThinkGeek as well as handcrafted items. They started with the wampa rug and the sheets and comforter. Since the bedding material features pink and purple, they used the colors as a basis. "She used that and made the color palette for the room. From there she and I both started looking for items that worked with those colors. She found the prints online and I worked with the artist to get them on canvas," Scott explains. "The Death Star was her idea, and I just made it and thought it needed to be big and the LED lighting and laser beam would help with the cool factor for the room. Most of the rest of the items were picked out by Emmie." 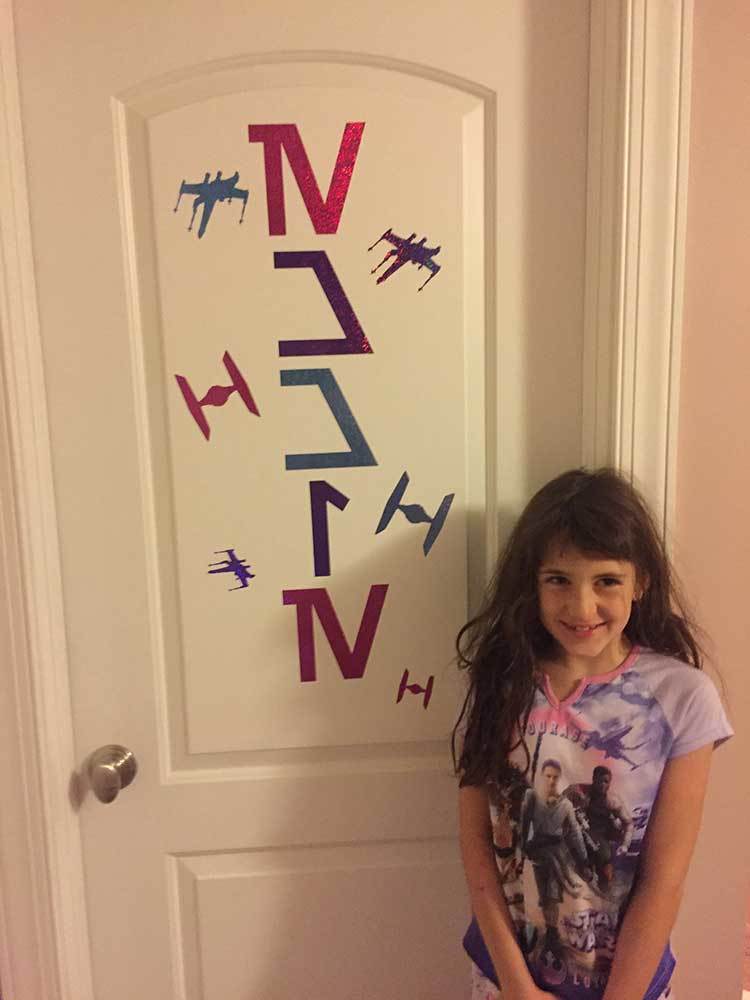 While the Death Star wall piece definitely catches my eye, I think the centerpiece of the room is the TIE desk. The fully operational work station is completely homemade. It took Scott a couple of months to settle on the TIE fighter shape after Emmie decided she wanted a Star Wars themed room. He says, "The TIE seems to be the best choice since a lot of the decorations were from the Empire. Basically, it is two pieces of particle board each cut in the shape of a TIE wing and painted. I then took a styrofoam ball, cut out the center, and put a piece of PVC plastic pipe through it."


"Then, I painted it all to look like a TIE cockpit. After that, I put the cockpit over a piece of steel pipe to hold the wings together. Once it was all together a good friend helped me weld a steel frame to hold the glass top. The important part to Emmie was that it was a pink TIE fighter deal. It had to 'look cool,' in her words. So that is why we decided to do the LED lighting."

I think they certainly nailed the cool factor. I'd happily trade in my desk for a rebel version of Emmie's desk. The desk and Death Star are Emmie's favorite aspects of the room because they were made just for her. As an added bonus, the LED lights on both those pieces are in sync and glow together. They go exceptionally well with Emmie's lightsaber lava lamps.

Do you or your youngling have Star Wars-themed decor? I'd love to see photos. You can share them with me on Twitter.