Details on Star Wars panels and costumers at Dragon Con! 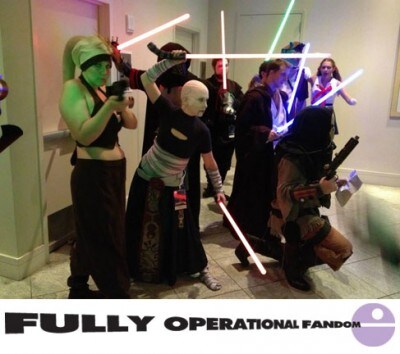 Fans are the foundation of any convention. Without excited ticket-purchasing attendees who want to see their favorite celebrities or comic creators or authors, conventions wouldn't exist. But Dragon Con takes fandom to the next level: it's run by the fans for the fans. So, while companies like Lucasfilm or Dark Horse or the typical convention staples didn't have official presences in Atlanta, you could still attend fun and interesting panels focusing on Star Wars all weekend long. And since panelists were mostly fellow fans, it was often like one big roundtable. It's unlike any convention I've ever attended.

The overall vibe of the con was pure enthusiasm. Despite the panels being spread out between multiple hotels and the fact that getting from place to place was not easy, most people didn't seem to care. They were thrilled to be there. The Star Wars track room was on the Atrium level of the Marriott and I went there several times, but I still got lost repeatedly. But, since most of their panels happened in one room meant they could decorate it and make it home for the weekend. Having that cozy and safe space to run to saved my sanity a few times.

Brandy Roatsey was the track director, and she and her staff put together a ton of entertaining panels. Like what, you ask? An introduction to the Expanded Universe, a discussion on Episode VII news, a voice actor panel for Star Wars: The Clone Wars with Daniel Logan, Matthew Wood, and Phil LaMarr, costuming how-tos, panels featuring authors such as Aaron Allston, Timothy Zahn, and Michael Stackpole, a hilarious live reading of Ian Doescher's William Shakespeare's Star Wars -- and that's just a small sample. Even the panels speculating about the sequel trilogy and Rebels, which I was fortunate enough to be on, were a blast despite not having a lot of concrete news. Calm, well-reasoned fan discussions can be amazing. If you wanted to, you could have just sat in Star Wars panels for all four days of the show. Of course, doing so would mean missing out on all the costumes.

Cosplayers don't kid around at Dragon Con. The costumes on display were the best of the best, and they were everywhere. Navigating through the crowds of lightsabers, wings, and even stilts was a lot like weaving through an asteroid field. Han and Chewie probably would have done better than me (I took a hit from a katana in the jaw at one point). You never knew when you'd turn a corner and run into a steampunk Boba Fett or Disney princess Jedi or Asajj Ventress. My camera was always out and ready to capture the show. The number of Star Wars costumes alone rivaled that of Celebration, and they were just part of the sea of costumes in the crowd.

No other convention I’ve been to seems to have such a high percentage of attendees in costume. Each night hundreds of them gather on three levels of the Marriott (the “main” host hotel), and you can barely move. It's hard to even find enough space to step back to take a photo. I liked finding a spot to people-watch, but the drawback of this is I didn't get to photograph the pair of bedazzled Darth Maul stilettos I spotted or an adorable snowbunny Padmé. You have to experience it to truly understand.

Even though it was madness, I think I'll go back. This was my Padawan year, learning how to get around and what to do. I’ll go in next year more aware and prepared. You know, just like Luke running to Cloud City.