StarWars.com speaks with the creators of Skywalking Through Neverland and Fly Casual!

Even though I've taken a couple of posts to highlight Star Wars podcasts, there are plenty more to discover. Fans pour energy and tons of time into preparing, recording, and editing shows for other fans to enjoy. There are hundreds of hours of content available on iTunes, and tens of thousands of Star Wars fans listen to various podcasts each week -- including Skywalking Through Neverland and Fly Casual. I talked with the fans behind both of those shows to learn more about why they podcast and what topics they discuss. Star Wars has been part of Disney since Star Tours opened at Disneyland in 1987. That bond has only become stronger, and there's a lot of crossover between Disney and Star Wars fans. Skywalking Through Neverland, a weekly podcast hosted by Richard and Sarah Woloski, covers both topics and features fantastic in-depth interviews with figures from both realms.

Richard: Sarah and I started Skywalking Through Neverland right after we released our Star Wars fan-film TPZ (think TMZ in the Star Wars universe). I am very driven by the creative process and wanted to get right to work on another film, but instead of spending a few years of production time on one film, I wanted to put that same energy into something more frequent. Like a podcast! A weekly podcast is a perfect medium to talk with and inform fans from all over the world. We are now making friends that we would never have had the opportunity to meet otherwise.

Sarah: When Richard came to me and said he’d like to start a podcast, I realized I had all the technical skills to make it a reality. So, I set about putting those skills to work on something fun, useful, and entertaining for Star Wars and Disney fans. What started as apprehension that I could do this at all has really turned into a love of promoting everyone we talk to on the podcast. I love that we’ve met so many people and made so many new friends.

On the kind of topics they discuss on Skywalking Through Neverland:

Richard: We love to hear what fans are up to. We'll spotlight their fan films and convention experiences and help promote their artistic projects. We have segments like “Point 5 Past Lightspeed” where fans come on and just let us know what they are doing in brief. We also cover subjects we know we can give our own personal spin or point of view. Picking a headlining topic that means something to us is a great way to get the best out of our guests.

Sarah: I love delving into the historical significance of a Disneyland ride. We’ve had segments discussing easter eggs and fun facts on the Haunted Mansion and Star Tours. We’ve spoken with David Collins about film music and the music of Disneyland. We’ve never been at a loss for discussion topics. In fact, we’ve often had to cut segments out or save them for the next week as the podcast would be too long!

On what kind of Star Wars attractions they'd like to see in Disney parks:

Richard: This was one of our show topics on episode 38 since there is so much to get excited about. I want the Mos Eisley cantina restaurant and a virtual roller coaster (much like the Harry Potter and the Forbidden Journey ride at Universal) that takes you through Jabba's palace. When you come face to face with the vile gangster himself, if he doesn't like you the floor drops and you "crash" down into the rancor pit.

Sarah: When discussing this on episode 38 with TechnoRetro Dads, we came up with the idea of a Death Star trench run coaster where you could join the dark side or the light side. You have to make your decision in line, and then depending on which side you choose, your ride vehicle is an X-wing or a TIE fighter. It’s a “dueling coaster” ride in which the X-wings and TIE fighters chase each other in space and the Death Star trench! Complete with John Williams’ score, of course!

Advice for others who would like to start a Star Wars and/or Disney podcast:

Richard: Do your research! If ten other podcasts are talking about the same thing, find another direction. Talk to other podcast listeners to find out what they listen to and why. Ask around to see what people would like to hear that isn't already out there. This will take time but your final product will show that you put extra effort into your show. Then ask yourself, "what excites me?" Podcasts take a lot of time, if you aren't fully passionate, you will only get to show five.

Sarah: Firstly, don’t expect to make any money! The benefits of podcasting rarely include monetary gain. Instead, it can lead to lifelong friendships and awesome experiences you could never predict. Write out your first ten shows and what topics you will be discussing. This long-term view will help give direction to your show. Also, it’s important to do a little research first. If you want to differentiate yourself, make sure you listen to several other podcasts about your topic to see what they are doing or talking about. But most of all, talk about what you are passionate about. The audience can tell by the excitement it hears in your voice. 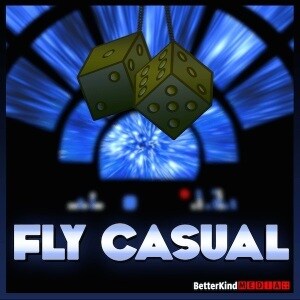 Want to kick back and listen to a podcast that feels like sitting around a table with your pals and talking about all aspects of the Star Wars universe? Then Fly Casual may be for you. Hosted by Corey, Mike, Garrick, and Stephen, the weekly show features no-holds-barred discussion and a lot of fun.

Corey: We popped the cork for Fly Casual this past June because we love Star Wars -- plain and simple. We already had the infrastructure in place for a gaming podcast that two of us (plus one other fine gentleman) had been publishing for about a year at that point, but we came to realize that for more than a decade, every time we all got together in one place an hours-long Star Wars discussion was more or less inevitable. We knew we should be recording our shenanigans because although we are avid fans, we're also highly opinionated. And perhaps most importantly, we love to make each other laugh.

Garrick: I only started podcasting in June of this year so I guess I would be considered a rookie. However, I feel more experienced as I have been "podcasting" Star Wars on many a friend's back porch for most of my life; it's just that we never had the bright idea to record ourselves until recently. Ever since I saw A New Hope in the third grade and I saw that infamous blockade runner being overrun by a star destroyer, I have had an unrelenting passion for the Star Wars universe. Passions are, by their very nature, saddled with the responsibility to share them. Podcasting has been an outlet for me to share these passions with anyone willing to listen.

On the topics they cover on Flying Casual:

Corey: Fly Casual is a bit of a one stop shop for Star Wars. Naturally, we cover anything new -- from Episode VII and Star Wars Rebels to any books or comics that come along, plus toys and collectibles. But, it's not all new. Most of us have roots buried in the Expanded Universe so you'll hear a lot about that as we adapt to all the new changes to the fiction.

Garrick: The easy answer is Star Wars and Star Wars. The real answer is we cover a wide range of topics. We usually have a free-flow conversation that can meander to just about any topic, and I do mean any. We try to focus on what we love. I, more specifically, focus on Star Wars collecting and collectibles.

On whether they discuss Episode VII rumors and spoilers on their podcast and why:

Corey: No one ever fully agrees on "spoilarz." Even among the four of us, there's a wide swing on the statute of limitations across all media. To remedy that, we've turned our once biweekly podcast into a weekly show, alternating between “News & Collectibles” vs. “Reviews & Rumors.”

Garrick: Lots and lots of disclaimers. Mostly with the rumors, it's just the crew and I pointing out the absurdity of the rumors that are coming out of the colon of the internet. Since we run a biweekly podcast, we usually have a longer recording time and we recently decided to separate the segments into two separate shows, in case people who listen enjoy us but don't want to be spoiled by the rumor mill.

Stay tuned for more interviews with Star Wars podcast hosts, and don't forget to check out previous installments of Podcasting Across the Galaxy.

Which Star Wars podcasts do you subscribe to? Head to the comments and tell me about your favorites!