I’m sure there are holidays on every planet. Heck, even the Wookiees have Life Day. And wherever there are mothers, I’m positive there’s a Mother's Day. From Coruscant to Tatooine, moms are being woken for a special day when their kids make them homemade cards and serve them blue milk and bantha breakfast steaks in bed. In our world Mother's Day is just a few days away. Let this be your reminder.

Plenty of lucky kids out there have moms who love Star Wars. I caught up with a few of these ladies to discuss how they've shared their passion for the saga with their children.

Nicole Wakelin first saw Star Wars with her father when she was seven. She fell in love and dressed up as Leia the next Halloween, complete with yarn buns on the sides of her head. Her costume even won her an air popcorn popper. She has two girls of her own now -- aged 9 and 10 -- who also enjoy Star Wars. Wakelin says, "I think, because I love it so much, they want to understand and love it too. Hearing them say things like ‘Use the Force, Mommy!’ when I can't make something work makes us all laugh. It's about having fun and connected over the things we love and Star Wars is high on that list." 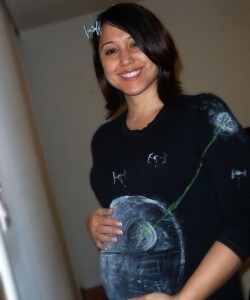 Nicole may have been nine, but Lori Llanillo's daughter Amelia has her beat. Lori introduced Amelia to the Force while she was still in the womb! During her third, and very visible, trimester of pregnancy, Llanillo dressed as the Death Star for Halloween. Lori is a lifetime fan and can't wait to introduce her daughter to Leia because, as she says, the princess is "politically savvy, sassy, proactive -- what's not to like?" She's also looking forward to soon taking her little girl to conventions in her very own Star Wars costume. And, even though Amelia’s Star Wars start was being the center of the galaxy’s greatest weapon, I’m sure that won’t push her down the path to the Dark side. Much the same way as Carrie Bland having her three daughters serve as her Imperial handlers when she's trooping with the 501st Legion won’t cause them to start searching for droids and shooting Jawas. Carrie first experienced the movies when she saw The Empire Strikes Back in theaters. Even though she was young (between two and three years old, she says), it made quite an impact. "I made my mom buy me all the toys and my favorite thing to do when I was little was to have all my Star Wars figures ride around on the backs of my My Little Ponies." Now she bonds with her daughters over toys like the LEGO Star Wars Advent Calendar.

I’m sure many of you reading this were shown Star Wars by your parents. You are so fortunate to have that… The Force runs strong in your family.

Lara Kirk showed her three kids VHS copies as soon as she thought they were old enough. Kirk saw A New Hope in the theater and said the excitement in the theater was infectious. She had all the best toys growing up: "When I was little I loved the Jawas and R2-D2, and as I got older I loved Han Solo right along with the rest of America's teens. The Star Wars saga was something that we all shared -- mysteries that we all uncovered and experienced together as a generation." Now she's crossing generations by sharing those special childhood memories with her family. 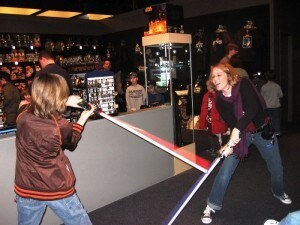 Laura Keeney has been wrapped up in Star Wars -- literally -- since she saw it in theaters in 1977. She covered herself in cardboard to be R2-D2 that Halloween. "It began what has been a life-long love affair." She has one son -- Emilio -- and he's become a fan, too. He started watching the movies when he was young, and Keeney says, "I never thought he was really paying attention until he made his version of an Imperial Destroyer out of LEGO. Of course, it was red, yellow, green, and blue, but to him it was the coolest ship ever. By the time he was four, he was head over heels in love." They pretend parts of the local park are Dagobah and have lightsaber battles. The best part though? Keeney says, "He told me he'd know a girl is ‘the one’ if she doesn't get upset when he answers her ‘I love you’ with ‘I know.’" 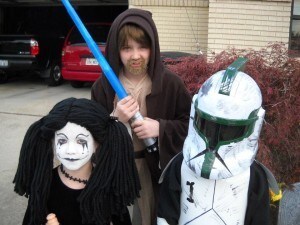 For many, a big part of adoring Star Wars is dressing up in costumes. Meagan Mead has translated her love for Star Wars into fashion. After seeing the movies in the late '70s, he mother dressed her up as Leia and took her to a local shop that had people appearing as Star Wars characters. "I walked in the shop and standing in the center of the shop with and angelic glow about her was Leia. I was so in love. I immediately ran up to hug her." Unfortunately, Darth Vader made a sudden appearance (as he does) causing her to hide under a table. Mead still dresses up as Leia and has even designed some fun pinup style Star Wars costumes. And her kids reap the benefits of her costuming skills, too! Her four children have dressed up as several characters over the years -- one of her daughters even sported a terrific Obi-Wan Kenobi costume. Mead says, "The best thing about being a geeky mom is the chance to show my children all these magical worlds and watch how their imaginations take them places including a galaxy far far away."

Hopefully not too far away for them to send a Mother’s Day card.