See the stunning covers from 40 years of Episode V adaptations.

This year the galaxy has been celebrating the 40th anniversary of Star Wars: The Empire Strikes Back -- but it’s also the same milestone for the legendary sequel’s novelization. And it’s a book with a worldwide legacy all its own, including diverse and beautiful cover art. Here just some of the many editions that have released over the last 40 years... 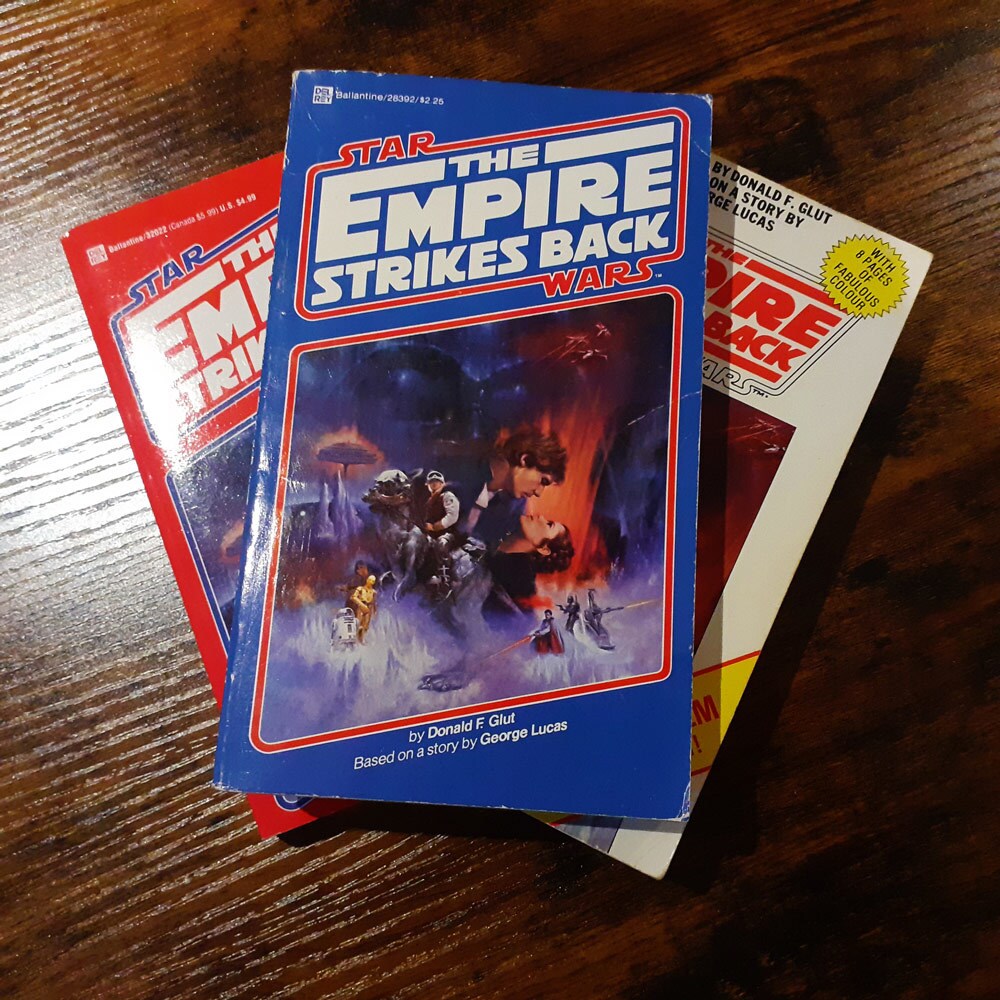 Written by George Lucas’ University of Southern California classmate Donald F. Glut and released April 12, 1980, the novelization featured striking artwork by Roger Kastel on the cover. Better known to fans as the Gone With The Wind poster, the design was based on fellow Star Wars artist Tom Jung’s creation for the Gone With The Wind re-release poster, painted by Howard Terpning. The 224-page novel would go on to sell three million copies and sit atop the best sellers list for two months.

In much the same way that Star Wars had exploded onto the pop culture scene, splashing the characters of the film onto all manner of merchandise and selling millions of copies of the novelization, so Empire followed suit. Further reprints of the novel would follow as the book reigned at the peak of the bestsellers charts. With the film poised to smash house records across the country and forge its way towards being the highest grossing film of 1980, a 183-page hardback Book Club edition of the novel was released in May of 1980. 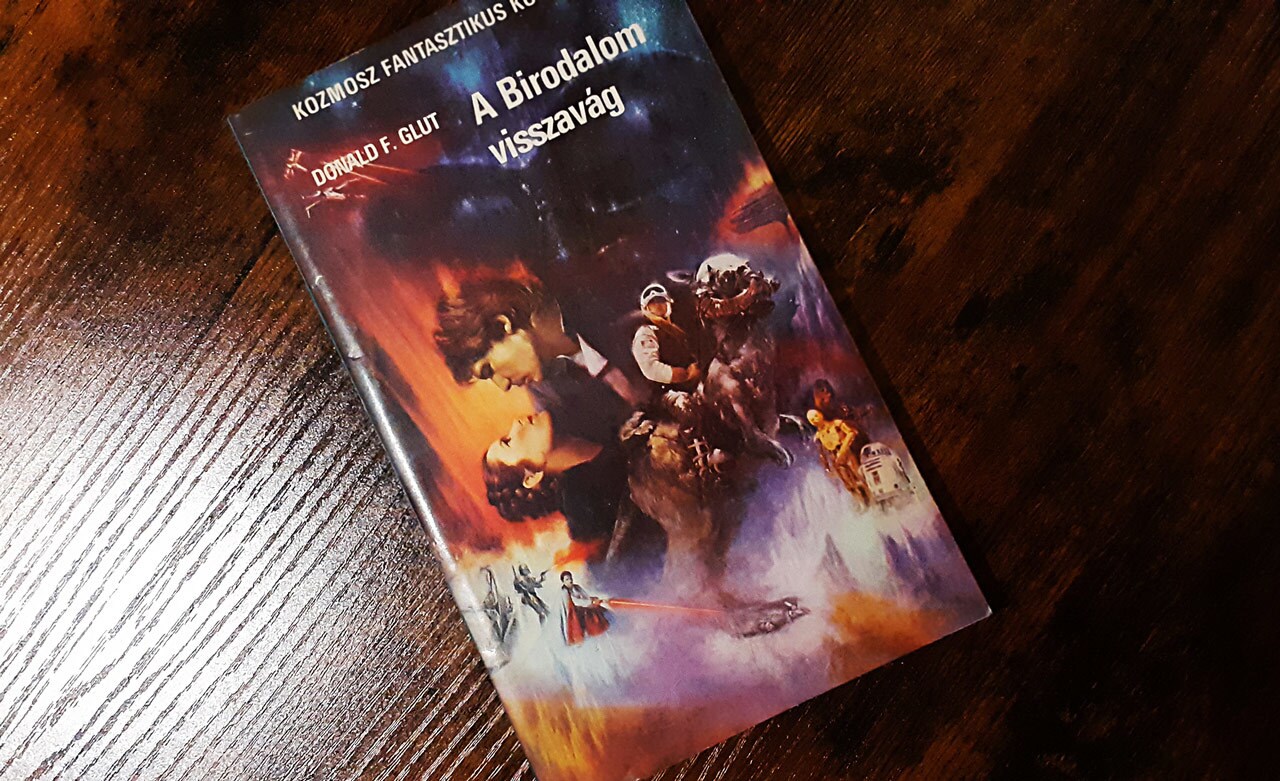 By this point, Star Wars was a globally marketable brand, and that meant international editions of the book began arriving. The Japanese edition landed on June 2, 1980, along with other versions from around the world. The novel also featured eight pages of color images from the film, a trend that crossed the Atlantic to the UK where the Sphere version was released. Laid out in the same format as the 1977 Star Wars novel, with the classic Sphere logo and yellow spine, and similar to the release of Splinter of the Mind’s Eye in 1978, the book was also a smash hit in the UK. 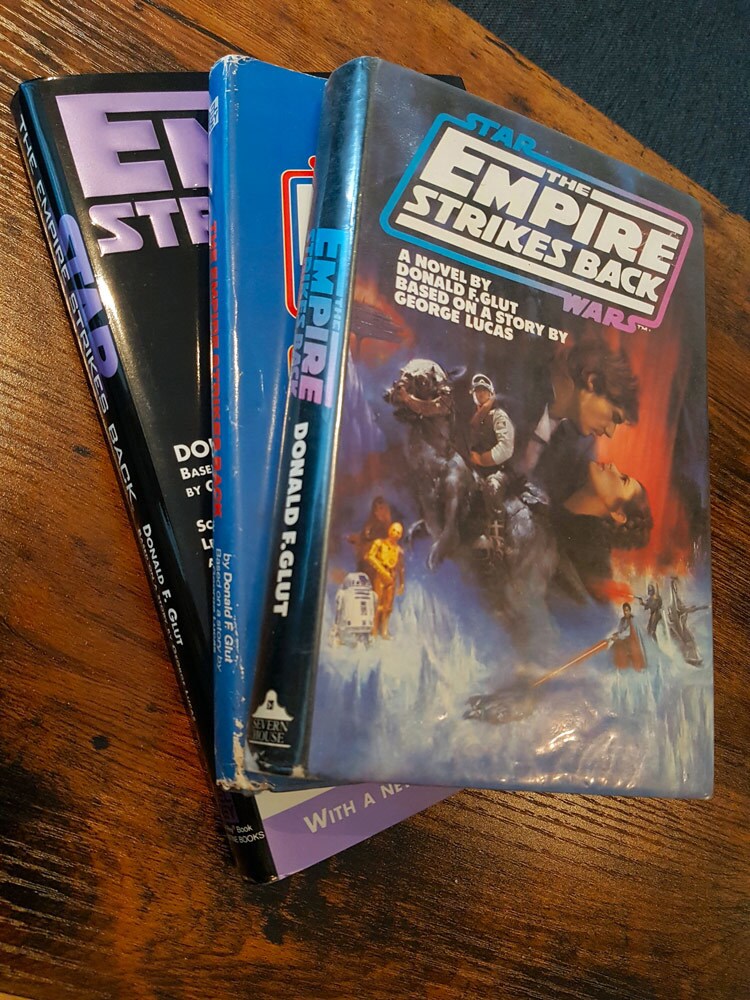 Heavily marketed via posters and flyers, a UK hardback edition, this time without photos, was published by Severn House on May 31, 1980. In 1992, the 16th printing of the Empire novelization arrived, identical to the previous releases apart from a color change. Instead of the familiar blue background and red Star Wars lettering around the  logo, the colors were switched, with a red background and blue logo. 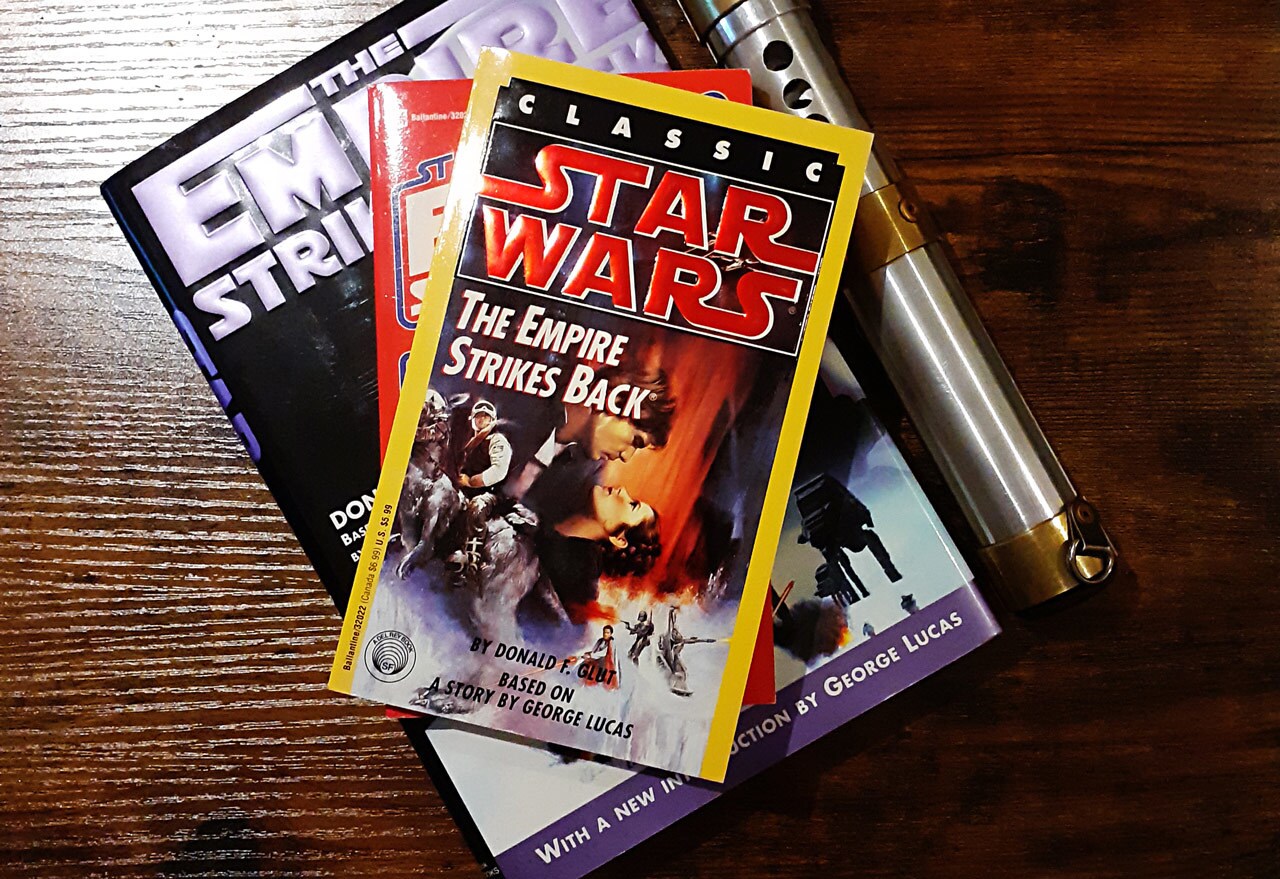 Classic Star Wars was a catch-all title used during the '90s, and that included The Empire Strikes Back, which was released once again in a yellow-covered edition behind that classic Roger Kastel artwork. 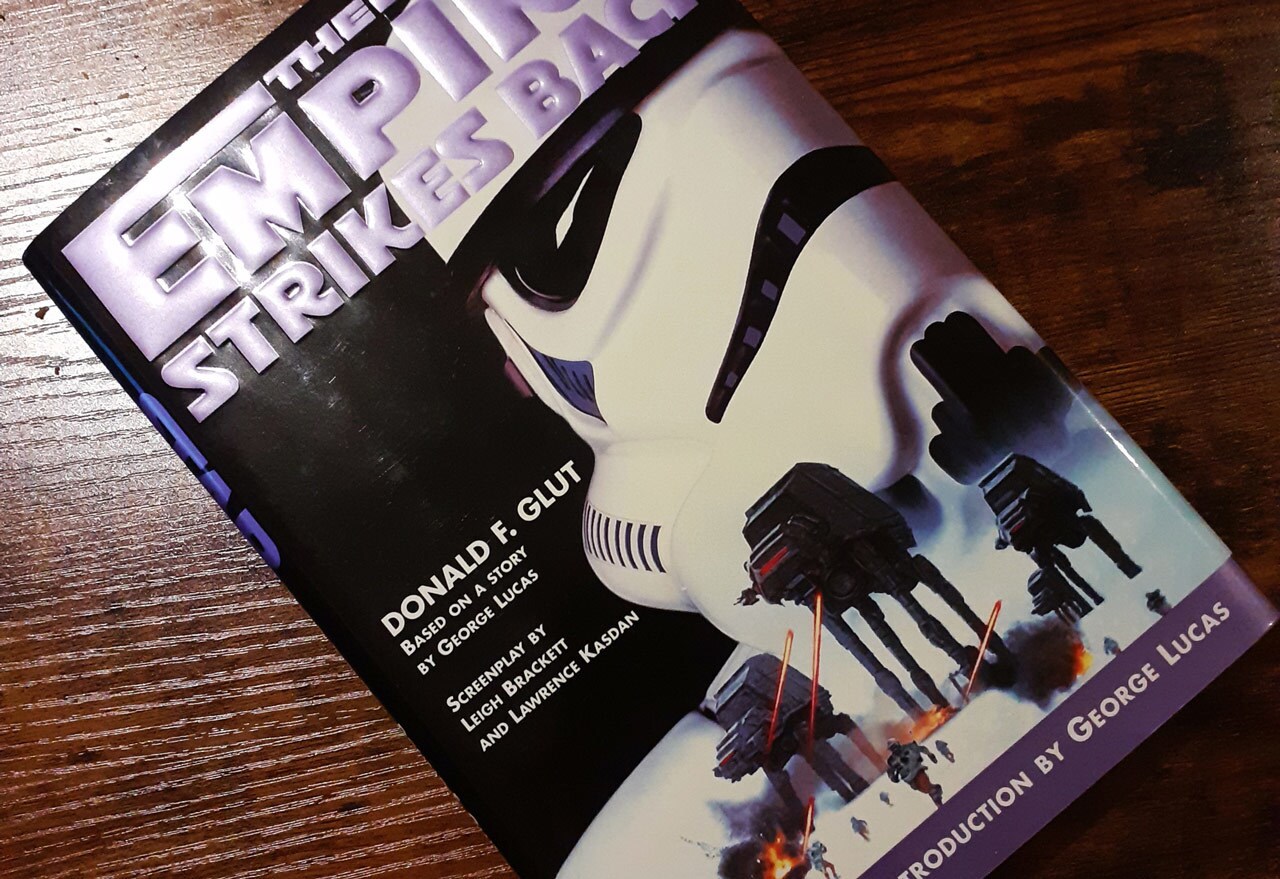 With the THX-certified releases of the Star Wars Trilogy on video, so came three re-released hardbacks of the original novels behind the same artwork that adorned the videos in the US and on the Malaysian VCD packaging. Where Star Wars: A New Hope had shown Darth Vader, so Empire featured the stoic stormtrooper, an image also used on the Japanese release on November 29, 1996. The individual novels were also re-released, this time utilizing a silver embossed version of the Special Edition logo, which was seen worldwide during 1997 (top of the stack, above). In Japan, the re-release celebrating the Special Editions used art by Drew Struzan, arriving on April 30, 1997 (seen in the above photo, right). 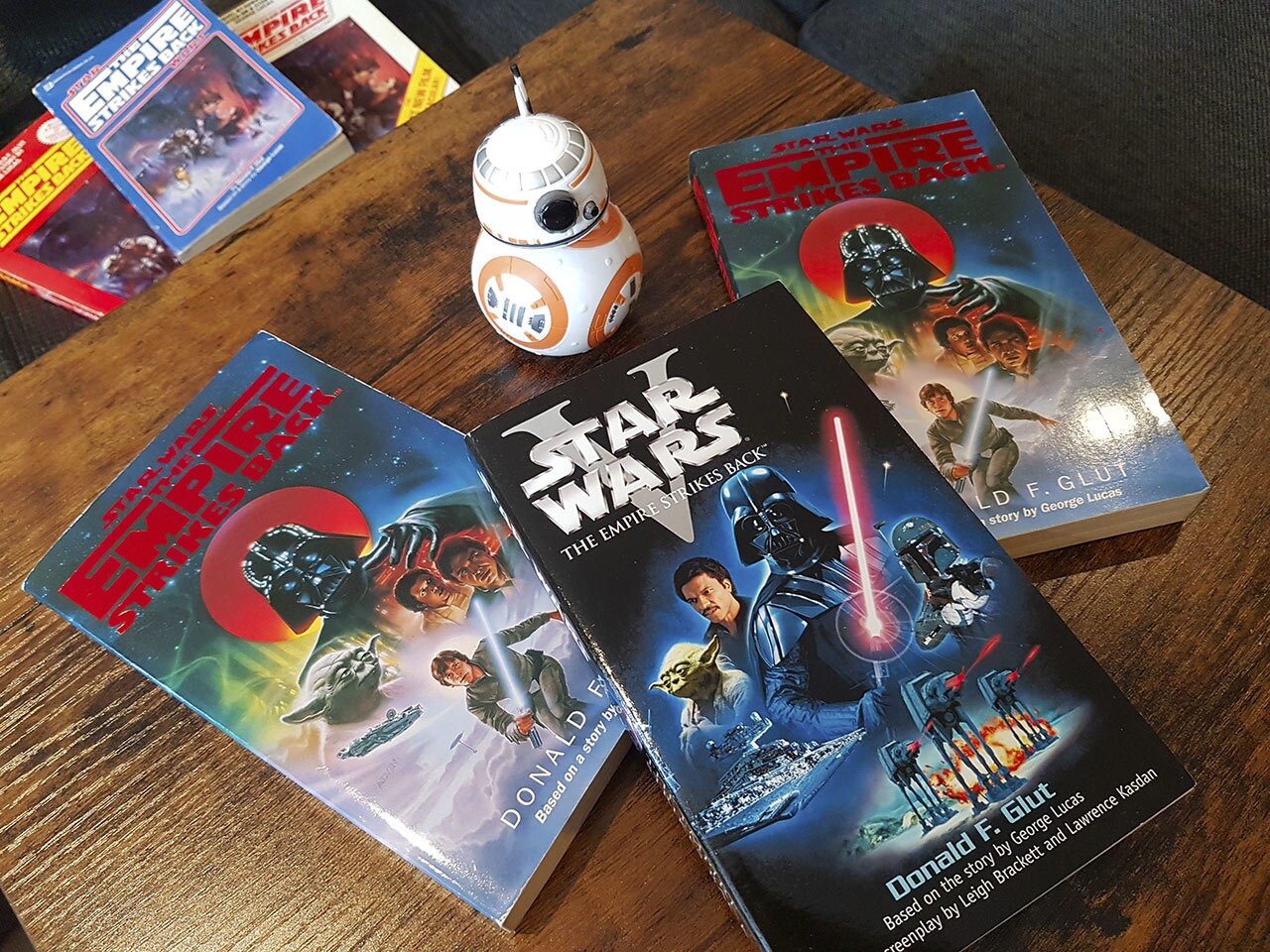 In 2003 another reprint released, this time by UK publisher Atom, an imprint of Time Warner Books, once again using the John Alvin artwork from 1995 (seen in the above photo on the left and right).

In 2004 and the lead up to Star Wars: Revenge of the Sith, the Empire novelization received its last single release as of this writing, boasting a foreword from George Lucas (seen above, center). Recent years have seen creative interpretations of Empire in book form. Disney Lucasfilm Press' So You Want to Be a Jedi by Adam Gidwitz retells the story of Empire while speaking directly to the reader; From a Certain Point of View: The Empire Strikes Back, which arrived this month, focuses on background and lesser-known characters.

Special thanks to Louis Turfrey.