The MLB pitcher on discovering the saga, the Tigers' upcoming Star Wars festivities, and the chances of striking out Darth Vader.

What do Jedi Knights and Major League Baseball pitchers have in common? More than you might think, actually. You need to be able to focus in pressure-filled situations, be able to center yourself when the odds are against you, and have the deepest commitment to your craft. Whether you are defending the galaxy from oppression and tyranny, or trying to prevent your opponent from knocking in that game-tying run from second base, you need to be ready for action!

Meet the Detroit Tigers’ own Jedi Knight, left-handed pitcher Blaine Hardy. Hardy made his Major League debut on June 16, 2014, against the Kansas City Royals, and whether he is making a spot start for his ballclub, or getting that critical out in late innings, the Tigers know he will be ready to go. Plus, he’s a huge Star Wars fan, who loves the saga, tauntauns, what makes Han Solo tick, and so much more.

And speaking of the team he made his first appearance against, Hardy’s Tigers will play the Royals on May the 4th, 2019, which is also Star Wars Night at Comerica Park. The Tigers are offering a Special Theme Event Ticket Package which will include a BB-8 Detroit Tigers beanie. StarWars.com spoke with Hardy about some of his Star Wars favorites, who the Yoda on his pitching staff might be, and the difference between Jedi training and spring training. 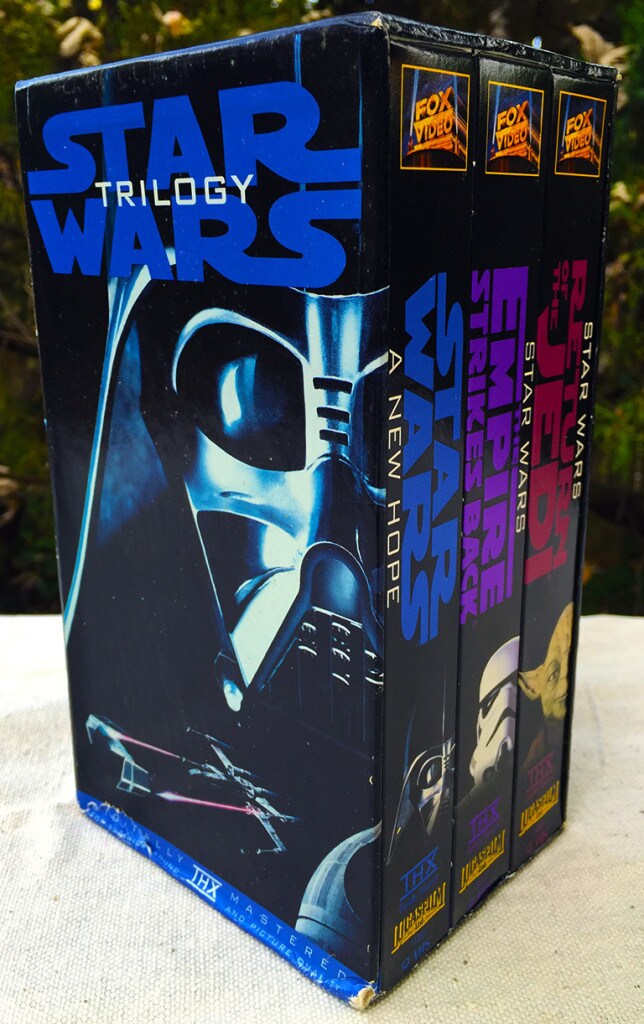 StarWars.com: Tell us about your history with Star Wars. Do you remember the first time you saw your first Star Wars film?

Blaine Hardy: I couldn’t tell you how old I was, but I definitely remember it. My dad was a huge Star Wars fan. I can actually remember the VHS box of the trilogy that we had downstairs. [Laughs] I mean, that seems like forever ago. The original three got me hooked. And now, there are just more and more Star Wars movies coming out. I grew up on Star Wars. Also Star Trek, so more of the sci-fi type movies.

StarWars.com: Did you watch them in order: Star Wars, Empire, and then Jedi?

Blaine Hardy: Yes. The funny thing is, with how many movies there are, and them jumping back and forth, the order gets, you know, kind of confusing to some people. But [before Solo debuted], I watched them completely in order. It’s fun to see, like, these unbelievable graphics from the first three, and then all of a sudden you jump to the older three that are in the middle and you’re like, “Okay, yeah, you know, all this technology and animation has come a long way from back when the original three came out.”

Blaine Hardy: [Laughs] It really is! 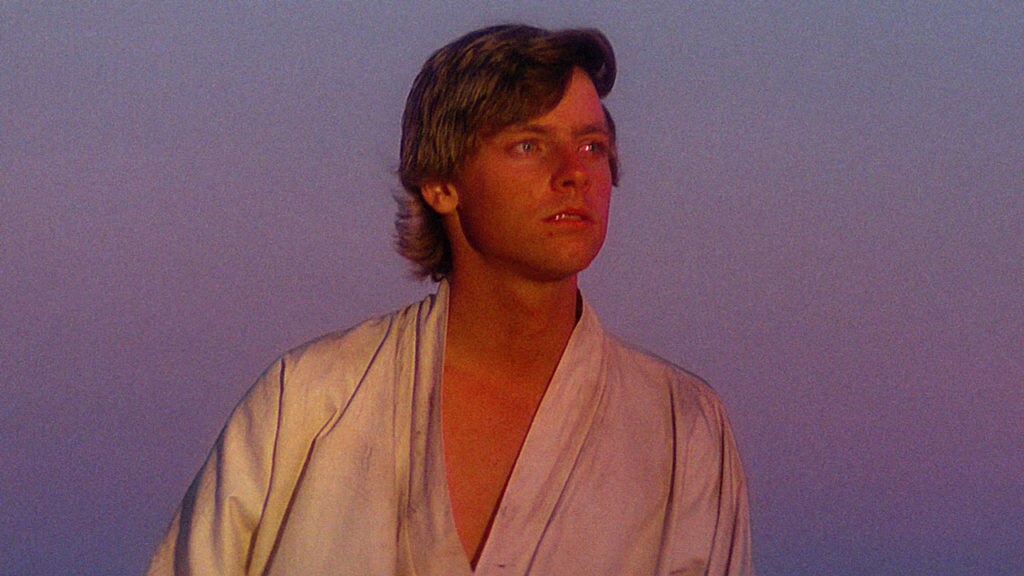 StarWars.com: So, what is it about the franchise that keeps people coming back for more?

Blaine Hardy: You can watch any of the Star Wars movies, and you are going to enjoy the full movie, the plots, the connectivity. They do a really good job with the storyline and tying everything together. Even now, with the movies coming out that are giving you a little bit more insight [into] the characters by themselves -- for instance, the Solo movie. You get to know Han just a little bit more and it makes every time you see Han Solo in all the other movies, it makes it that much more enjoyable because you’re like, “Oh, this is his story. That’s why he’s like this.” It’s a lot of fun to be able to get to know the characters throughout all the movies.

StarWars.com: So, you’re a family man and a proud father and you’ve got a lot of important decisions to make as a parent, naturally. Here’s a really important question. [Laughs] Are you ready for this?

StarWars.com: Have you considered how you are going to introduce the Star Wars films to your son, and what order will you show them to him?

Blaine Hardy: You know, I’m probably going to do it in order.

Blaine Hardy: I’m going to say probably I, II, III, IV, V, VI just so he doesn’t get confused on, “Whoa. Wait. Wait. Wait. You’re telling me that these three are actually after the three we’re going to watch now?” [Laughs] I’ll probably just do it in order and really explain to him, like, “Keep in mind, you know, this is 30 years ago, 40 years ago when they came out, so the graphics aren’t going to be as good.” But, we’re still quite a ways from introducing the Star Wars saga to our son. I’m sure we’ll probably be on the [Laughs] Sponge Bob Square Pants-type shows for quite some time until we can switch over to stuff like Star Wars.

StarWars.com: Oh yeah. I waited until my son was five. That was the quickest I thought it would be okay to show him. But the question I always got when I first became a dad was, “What will you do if your son is not interested in Star Wars?” Will your son just have to work even harder on his offspeed stuff if that’s the case?

Blaine Hardy: [Laughs] See, and that’s the beautiful thing about parenting. Everyone has their own way of parenting. Like, I get asked the question all the time, “Well, what if he doesn’t like baseball?”

Blaine Hardy: I tell everyone that if he doesn’t like baseball then he does whatever he loves. That’s really how it should be for every child, you know. I’d hate to force him to play something just because I’m good at it. If he wants to be a soccer player, he can be a soccer player. If he wants to be a scientist like his mother, then he can be a scientist, and I can just nod with both of them when they are having conversations. [Laughs]

StarWars.com: [Laughs] Do you collect Star Wars action figures? Anything like that?

Blaine Hardy: I never really got into the collectibles for Star Wars. I’m sure when I was younger, I think I had maybe like, a Boba Fett little figurine or something like that. Probably a Luke Skywalker figurine as well, with the lightsaber. But, I think I was just… obviously I love Star Wars, but I was also very preoccupied with sports, as well, growing up, so I really didn’t have all that time to be playing with toys, because I was always outside playing sports.

StarWars.com: So obviously, to be a Jedi, you need to have the ultimate concentration and focus. But this is not unlike being a major league pitcher. Who would be the Yoda on your pitching staff that everyone goes to for advice?

Blaine Hardy: Well, the easiest answer would be the [Detroit Tigers] pitching coach, Andy [Rick Anderson]. But, if you’re going the whole team, obviously everyone’s going to go to Gardy [nickname affectionately given to Detroit Tigers Manager, Ron Gardenhire] because, obviously, he’s our manager. He’s the one who makes all the important decisions on who comes in, who goes to pinch-hit, and all that stuff. But really, you know, this year’s been a little bit different. The starters and the bullpen guys are actualy like, united as one, whereas usually, I think it’s the case for most teams, the bullpen and the rotation are usually a little bit separated because, well, it’s the bullpen verses the starting rotation. But for the most part, we’re going out there everyday to the bullpen and everyone’s got feedback for everyone, so everyone’s feeding off each other.

StarWars.com: What similarities are there between Jedi training and spring training?

Blaine Hardy: [Laughs] I’m going to say there’s not much of a similarity at all. [Laughter] But that’s more of the geek in me knowing becoming a Jedi is not easy. I’m not saying being a professional baseball player is easy, either. But if you’re comparing the two, I’d say that the focus to become a Jedi Master is probably a hundred times, if not a thousand times harder than the training of being a professional baseball player. [Laughs]

StarWars.com: May the 4th is Star Wars Night at Comerica Park. How exciting is it to combine two of your passions like this?

Blaine Hardy: [Laughs] You know, it’s a lot of fun to see what our guys do with respect to celebrating baseball and then also celebrating Star Wars at the same time. What they do with the scoreboard stuff, they have little fun games, you see a bunch of people dressed up as their favorite Star Wars characters. It will be a fun night, and you know, if I happen to get to pitch that night, it will make it even better. [Laughs] StarWars.com: There’s going to be a Special Theme Event Ticket Package which will include a BB-8 Detroit Tigers beanie on May the 4th against the Kansas City Royals. It’s actually a perfect combination of Tigers’ colors and BB-8. Think your manager, Ron Gardenhire, will let the team sport these in the clubhouse and dugout?

Blaine Hardy: It’s kind of a toss-up. For me, my two favorites are the second [Star Wars: The Empire Strikes Back] and the third [Star Wars: Return of the Jedi], which now are the fifth and the sixth.

StarWars.com: Do you have a favorite character?

Blaine Hardy: When I was younger, Boba Fett. I don’t know what it is. I think it was just his attire. I know you’re not supposed to have a bad guy as your favorite character, but...

StarWars.com: He is cool-looking.

Blaine Hardy: Yeah, he is cool-looking. But other that than, Han Solo. I think half of that is because of who played him. You can’t really go wrong there. The character was portrayed so well and then once the new Solo movie came out, it gave you a little more backstory and made you love him even more.

StarWars.com: Who would be harder to strike out: Darth Vader or Kylo Ren?

Blaine Hardy: Oooh. I’m going to have to go with Darth Vader.

Blaine Hardy: Only because he’s one of the most iconic, evil villains. [Laughs] There’s so much going on there that ii makes it difficult to say who would be harder to strike out, but I have to go with Darth Vader.

StarWars.com: If you had to explain why Star Wars is an important story to someone who had never seen it, what would you tell them?

Blaine Hardy: You know, I think it goes along the lines of, you see all of these movies that are based on books come out and everyone that’s read the book always says, the book was better. I think Star Wars is so well put together that it’s like reading a book and it gives you an amazing backstory. An amazing plot, character development; you want something that’s going to entertain you and make you want to come back for more, and Star Wars is definitely that. You know, and it’s not for everyone, but if you like anything that’s somewhat sci-fi, you gotta watch Star Wars, obviously.

Dan Zehr is the host and co-creator of Coffee With Kenobi, a podcast that examines Star Wars’ mythology from a place of intelligence and humor. He is also a high school English teacher with an MS in Teaching and Learning.