So far, the critically-acclaimed toys-to-life game has brought us Light FX versions, as they're called, of Yoda, Obi-Wan Kenobi, Kanan Jarrus, Darth Vader, Luke Skywalker, and Anakin Skywalker; just place the figures on the Disney Infinity base, fire up Disney Infinity 3.0 Edition, and the toys' Jedi weapons ignite. It's a feature that encapsulates the game's unique ability to appeal to the kid in everyone, and finally, a new entrant in the Light FX series is coming: Star Wars: The Force Awakens cross-saber-wielding baddie Kylo Ren.

Available for pre-order now, the figure -- in a menacing, ready-for-battle pose, designed in Disney Infinity's beautiful, energetic style -- was unveiled in a rather unorthodox, yet very cool, way. Instagram action-figure photographer Johnny Wu, a.k.a. @sgtbananas, was given early access to Kylo. Wu, a native of Pacifica, California, built an outdoor diorama recreating the snowy forests of Starkiller Base, shot with his Canon 5D Mark III, and the result is rather stunning: a clear yet haunting image capturing the power of Ren, with the unaltered red lighting effect from his weapon conveying real anger against the white snow. StarWars.com spoke with Wu about the making of the photo and more. 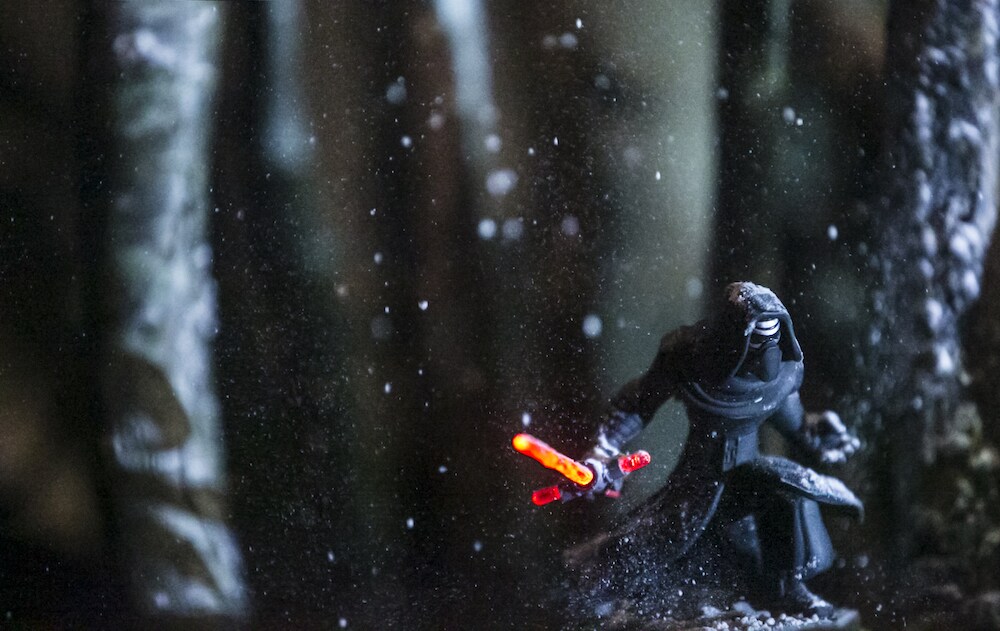 StarWars.com: I've followed you on Instagram for a long time and from what I can tell, the Disney Infinity figures are the only non-posable figures that you photograph. What about their design appeals to you?

Johnny Wu: They photograph really well. Initially, when I first saw the figures in stores, I wasn’t really thinking about photographing them. Then a friend of mine photographed a handful of them and kind of sold me on it. So then I went out and picked up a Yoda, and after photographing it the one time I saw the potential of them. They just look really good. Even though they don’t move, [it's] just how good they look. They’re really photogenic, is what it comes down to.

StarWars.com: So the Kylo Ren Light FX photo is really pretty stunning. I’m just curious, how did you decide on the setting and the angle and the feel?

Johnny Wu: So initially when they told me about that figure and what they wanted me to do, I had that iconic forest scene, the Starkiller Base forest scene, in mind. I didn’t really realize that the Light FX figures have to be on the base for it to light up and the game has to be playing. That was kind of a hurdle at first, because normally when I go out and shoot, I'll go to the beach or the park. It’s all outdoors, so once I realized that I had to have a game system present and stuff like that, that kind of went out the window, in a sense. So I improvised. I was like, "Well, my backyard has a bunch of trees in it and there’s a lot of greenery, so I can gather some sticks and cut them to scale to look like a forest for that size figure." So I did that and then it ended up working out pretty well. I’ve actually used that make-shift diorama a couple of different times now with other figures. But when I first thought of photographing that figure, that was the one idea that popped in my head right away, and I just kind of ran with it. 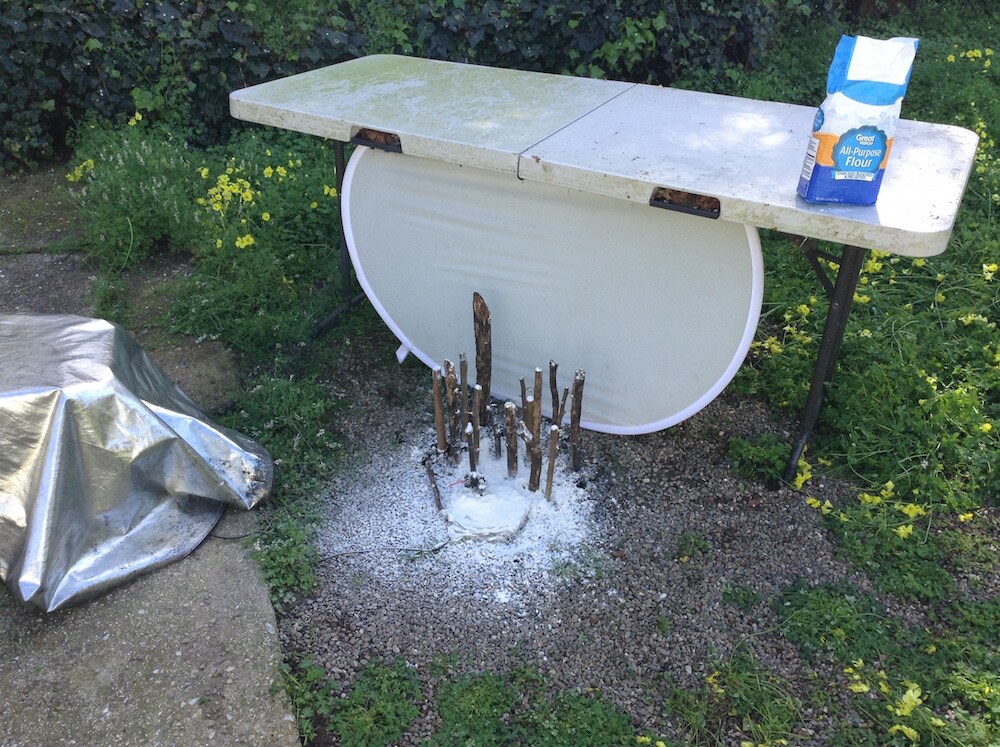 StarWars.com: I have a behind-the-scenes photo of the diorama and it’s funny how small it is. It’s hard to believe that's what we’re seeing in the final photo. Did you have in your head what the final result would look like? Were you confident that you were going to be able to pull off that sense of depth? Or was it trial and error?

Johnny Wu: Well, I always have the idea. I always have an idea of how it should look. This particular photo was one of those rare times when I had the idea in my head, but it was real loose, though. It was basically like, "Kylo Ren in a forest, it's snowing." [Laughs] It was so loosely based, but the end result actually ended up being a lot better than I had imagined it in my head, which is rare. I hope for the times where that happens, but it doesn't always work out that way.

One of the issues, besides the base and all that stuff, was the lightsaber being bright enough in daylight. Usually, I shoot during the day. I don’t shoot at night a whole lot. One of the hurdles I had to overcome to get the photo was it just wasn't bright enough during the day, so I had to wait until nighttime. And then the way I was doing it made it hard to capture the quote-unquote snow, which was actually just flour.

StarWars.com: It looks like it’s snowing but it also looks like he’s kicking up snow at the same time. How do you get that effect?

Johnny Wu: That was just, basically, it bouncing off of the figure. When it was dropping, maybe the wind caught it a little bit. It wasn’t something that I could really control, it’s just one of those natural things that I just got lucky with. [Laughs]

StarWars.com: Tell me what you think about this figure specifically and the light-up feature, as well as what it adds to your photography.

Johnny Wu: I really like the figure. The light-up feature is really cool, actually. For some reason, when you’re just looking at it with your own eyes, not through the camera, it just has a red glow to it. But when you photograph it, it looks like it’s on fire. So I don’t know what the deal is with that, but it’s really cool how it works. It looks more like it does in the movie, all crazy and unstable. 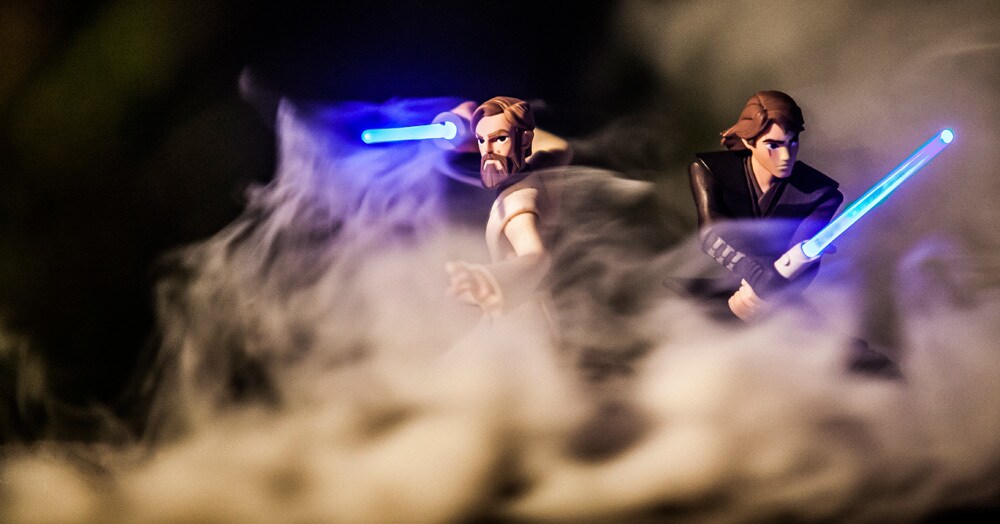 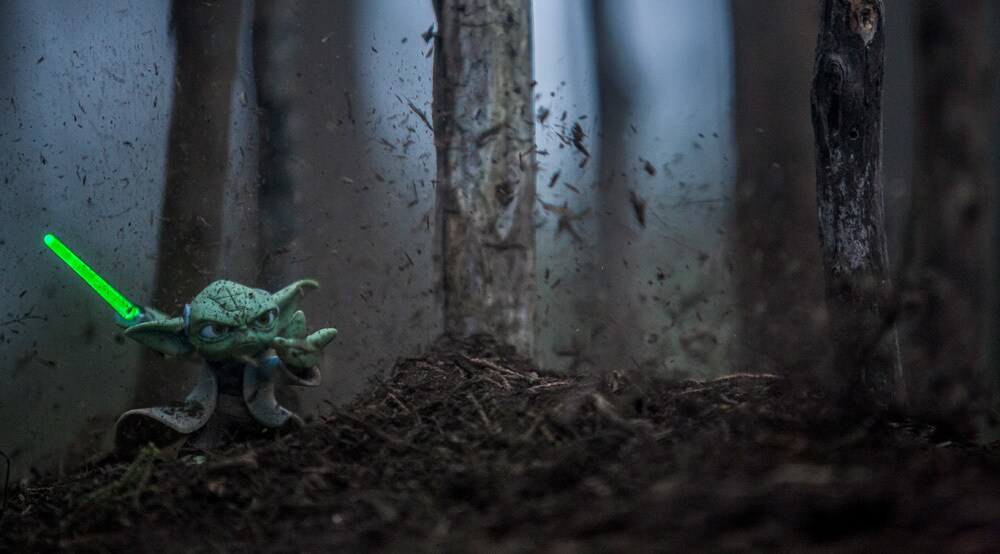 StarWars.com: You also shot some of the other Light FX figures. There’s the Yoda, there’s Obi-Wan and Anakin in the smoke, there's Kanan, and there’s Luke fighting Vader in the snow. How did you approach those photographs?

Johnny Wu: With each shot I was struggling to bring something new to each one. So, the Anakin and the Obi-Wan shot, I just set those two next to each other on the base and then I actually used a smoke bomb. I covered up the base, so I used the smoke bomb. I lit that thing and then just started shooting away and it ended up working out.

StarWars.com: With all the things that you do to your figures -- smoke bombs, dropping flour on them -- I would be worried I was ruining my collection with all that stuff. You don’t have that fear?

Johnny Wu: [Laughs] Well, I do. When I’m using any kind of firework, that’s always in the back of my mind. With the smoke bomb you can kind of get away with having it a bit further away, because it will just shoot out. But other times when I’ve used different types of fireworks, like even like a fire cracker, or sparklers, or things like that, it gets kind of worrisome. [Laughs] I’ve definitely had stuff get ruined. I actually had one stormtrooper that I was experimenting with, and he got burnt pretty bad, but it ended up adding a weathering effect to his armor, and it actually looked pretty cool. I’m probably like a real collector's worst nightmare, though.

StarWars.com: Yeah, I would never lend you anything.

Johnny Wu: [Laughs] I don’t blame you. I collect a lot of stuff. I love the toys. I mean, that’s why I do all this. It’s like a loophole for me to play with my toys as an adult. I don’t really display a lot of stuff. I don’t really have any shelves or anything like that, so most of the time, whatever figures that I photograph on a regular basis, they’re in a tackle box or they’re in my backpack. And that’s kind of where they live but they go everywhere with me. 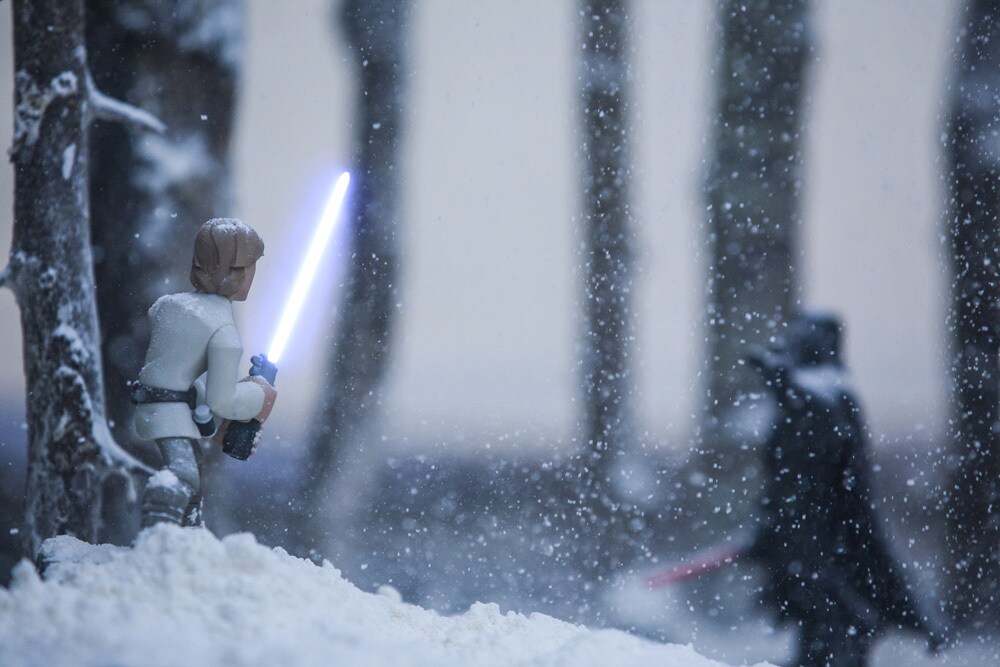 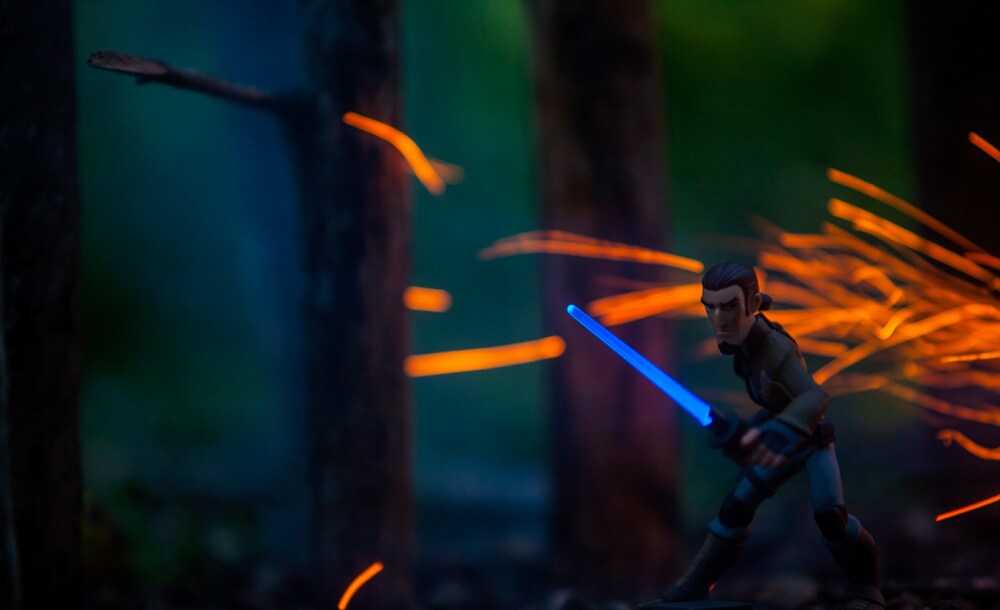 StarWars.com: You're a Star Wars fan?

Johnny Wu: Yeah, I’ve always been a big Star Wars fan, but I was never really into photography. Once I got into the photography part, it made me love it even more. Being able to create scenes is the best. I feel like my whole life, I’ve wanted to be an artist of some kind, and I’m not good at drawing, not good at painting. I’ve never really considered myself an artist, and I used to be the guy who was like, “Oh, I don’t really think photography is that cool.” Man, was I wrong. [Laughs] It’s funny now, thinking back, “I don’t even care about photography,” and it's my life now.