Daniel M. Lavery on Admiral Motti's Force Problems in From a Certain Point of View

The author discusses his affinity for petty grievances and paperwork, which inspired "An Incident Report."

This article is the third installment in a special 3-part author interview series in honor of Star Wars Reads and last week’s release of the landmark Star Wars anthology, From a Certain Point of View. In case you missed them, be sure to read our interviews with Meg Cabot and Nnedi Okorafor.

Who could forget how the smugly ambitious Admiral Motti praised the Death Star as the ultimate power in the universe only to be swiftly, er, convinced otherwise by none other than Lord Vader? Definitely not Motti himself. The exchange has long left author Daniel M. Lavery eager to explore what came next for the upper echelon of the Empire's elite (you know, before Luke came around with his preternatural bullseye skills.) Lavery previously used his absurdist wit to help launch feminist humor site The Toast, pen a book, Texts from Jane Eyre, re-imagining classic literary characters with modern texting technology at their fingertips, and currently acts as the voice of reason for Slate's Dear Prudence advice column.

Now as part of the all-star list of authors in the new From a Certain Point of View anthology, he takes on the establishment as a post-Force-choked Admiral Motti frustrated by workplace harassment in “An Incident Report.” StarWars.com e-mailed with Lavery to find out what inspired his ode to fussy bureaucrats. 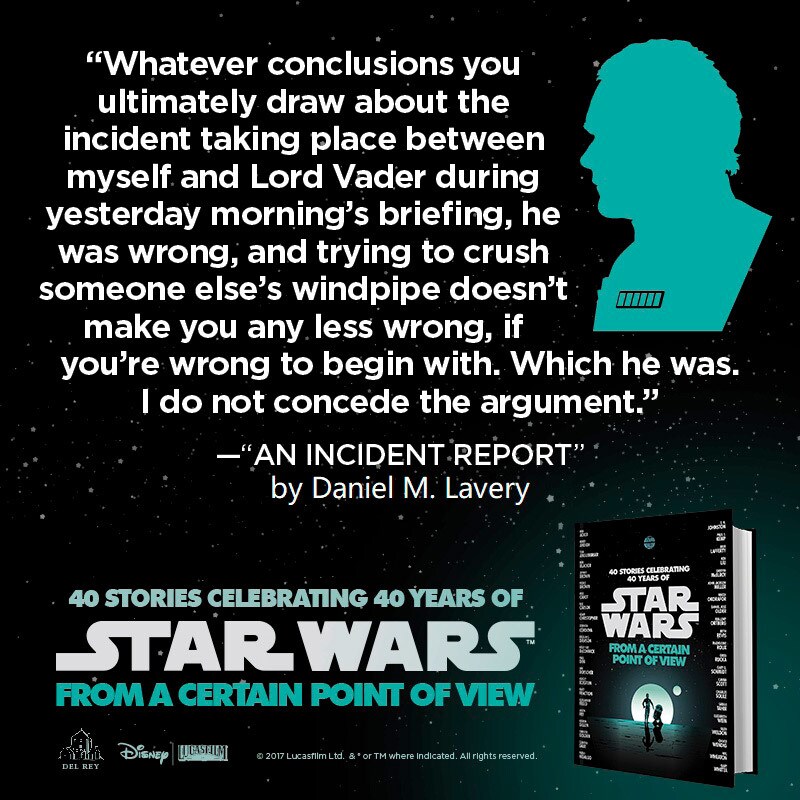 StarWars.com: In the vast universe of Star Wars authors, you're new to the fold. How did you come to write for Star Wars?

Daniel M. Lavery: I have been preparing my whole life for this. Elizabeth Schaefer at Penguin Random House got in touch with my agent earlier this year because they were partnering with Lucasfilm and I think she was familiar with how often I would get on Twitter and yell about Kyp Durron's insufficient sentencing for war crimes and other feelings I've had. I first got into the Expanded Universe [now Legends] novels when I was in fourth or fifth grade, and so I'd been waiting for an e-mail like the one Elizabeth sent me for roughly 19 years. My body was ready. I will write for Star Wars anytime, anywhere. I am all in.

StarWars.com: Let's talk more about your own relationship to the saga. How did you first get introduced to Star Wars? What aspects of the films resonated most when you were a kid?

Daniel M. Lavery: I mean, growing up in the United States, you tend to hear about Star Wars. I probably watched it 20-30 times as a little kid before the remastered trilogy got re-released in '97. I went with my dad and siblings at a movie theater in a mall and just went nuts all over again. I was (and am) a huge Mark Hamill fan, both because of Luke and for his voice work on Batman: The Animated Series in the mid-'90s, and I think afterwards I started spending my weekly allowance at Borders on the EU novels. I started with Timothy Zahn's Heir to the Empire trilogy and was hooked from there. Actually, I may have started with Tales From Jabba's Palace, another anthology, now that I think about it. I just loved the grimy, weird details of Jabba's inner circle -- the B'omarr monks! Bib Fortuna! Salacious Crumb!

StarWars.com: When you first became involved in the anthology, what made you decide on Admiral Motti?

Daniel M. Lavery: It was such a surreal choice to get to make -- to see a list of side characters from A New Hope and to get to pick somebody was so thrilling and overwhelming. I narrowed it down to Motti pretty quickly, because I love fussy bureaucrats. Vader, especially in the first film, feels so huge and terrifying and mysterious, and I loved the idea of someone who had to work with the guy on a regular basis and is really sick of dealing with him in meetings.

StarWars.com: When you sat down to write "An Incident Report," what were your intentions?

Daniel M. Lavery: Oh, man, I think primarily what I wanted to capture was my own capacity to feel Horribly Wronged And Misunderstood and then magnify it to Imperial proportions. Just a list of grievances, both petty and significant, and really give free rein to my own worst impulses towards self-justification and self-pity.

StarWars.com: Motti is so smug and arrogant on film and that really comes across here. How much direction were you given for the character and how much freedom did you have to play around?

Daniel M. Lavery: A lot of freedom! You definitely get the sense that you know Motti's whole deal from just a few minutes onscreen, so it felt really easy to write from his perspective. I didn't want to try to redefine him or offer up an internal monologue that doesn't jibe with what you see onscreen -- I wanted to capture what we've already seen from him.

StarWars.com: Who knew bureaucracy could be so entertaining! In your mind, what happens after he files this report?

Daniel M. Lavery: Oh, god, he probably dies shortly thereafter. His last act in life was a passive-aggressive attempt to get most of his co-workers written up, and then he dies just as he lived.

StarWars.com: I really enjoyed how Motti's entire argument isn't just about being choked, but he's also genuinely furious about Vader's, as you put it, "workplace proselytization." Over the years, Star Wars has somewhat moved away from focusing on non-believers who think the Force is some hokey religion, and I love that this brings us back full circle. What made you decide to take the story in this direction?

Daniel M. Lavery: It helps that he comes out and openly ridicules the Force in the script, and certainly at the time of A New Hope, there are plenty of characters who are all very much, like, "The Force? NEVER HEARD OF IT. Shut up." And there has been so much great stuff written about the Force and how different people relate to it and what that can look like, that it felt delightful to look at it from the perspective of someone who's like, "Maybe it's real, maybe it's not, it probably isn't but either way it has no business in the workplace.” Someone who considers themselves to be open-minded and tolerant but is in fact, you know, totally contemptuous. Like, "Care about the Force all you want, guy, but this isn't the Force Star, it's the Death Star."

StarWars.com: I was an avid reader of your now-defunct humor site The Toast, and this story definitely felt like in another time it could have been an entry there. You've also written a book imagining literary characters conversing via text message and currently helm the Slate's "Dear Prudence" advice column. How has the experience of writing for an established universe like Star Wars differed from your other work?

Daniel M. Lavery: I'm so glad to hear that you liked it, and you're absolutely right! I think I published at least one article about the terrible miscarriage of justice that was Kyp Durron's off-the-books sentencing during the Jedi Academy trilogy on The Toast, because I am incapable of saying no to myself. This felt very much of a piece with other writing I've done, just because I really enjoy writing from the perspective of already-established characters, so it was definitely in line with *gestures vaguely in the direction of myself* My Whole Deal And Wheelhouse, I guess. 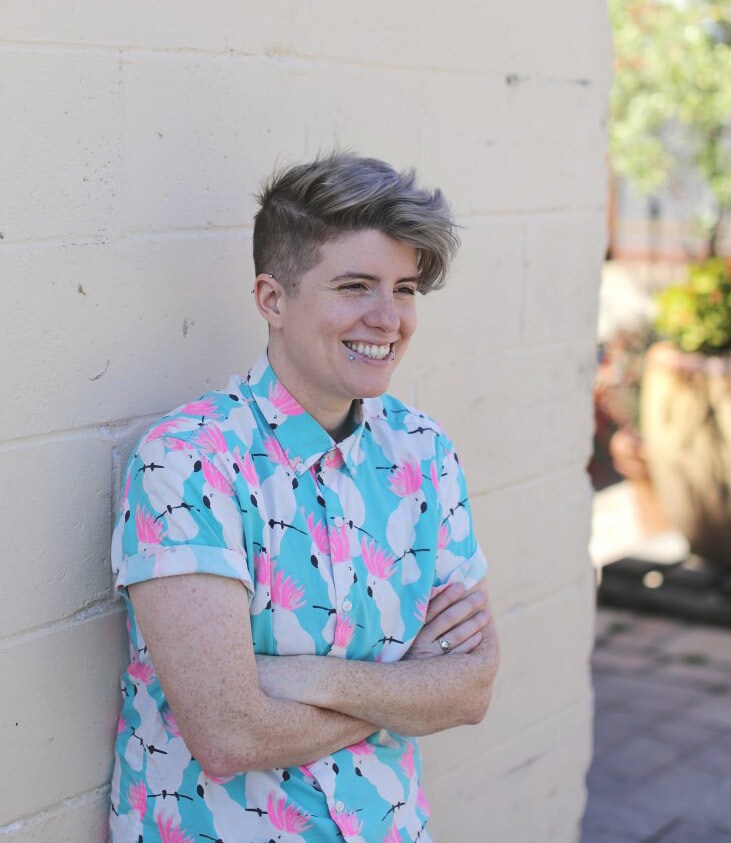 StarWars.com: If you could write something else for Star Wars, what character or era would you like to explore next time?

Daniel M. Lavery: Literally anything, literally anytime. This is me, making myself available. Put me in, Coach! GIVE ME EPISODE NINE.