Christian Blauvelt on Simplifying the Saga in Star Wars Made Easy

The author talks to StarWars.com about Star Wars frenemies, The Last Jedi's "space horses," and more.

For many Star Wars fans, knowing the story inside and out comes as easily as using the Force. But often, we have many friends and family members who aren’t as well versed in the galaxy far, far away. Instead of cutting them out of your life with a lightsaber, why not invite them to join you on the Star Wars side? With the new hardback book from DK Publishing, it’s easy to help bring new fans up to speed -- at light speed! Released last month as part of the Journey to Star Wars: The Last Jedi publishing program, Star Wars Made Easy by Christian Blauvelt is the perfect resource for those at a Padawan level of mastery, plus there’s plenty of useful info for those who already know their Jettsters from their jet packs. StarWars.com got the inside scoop via e-mail from Blauvelt on Star Wars Made Easy, and he tells us where the fun begins -- and even teases a little bit about what his book includes about The Last Jedi. 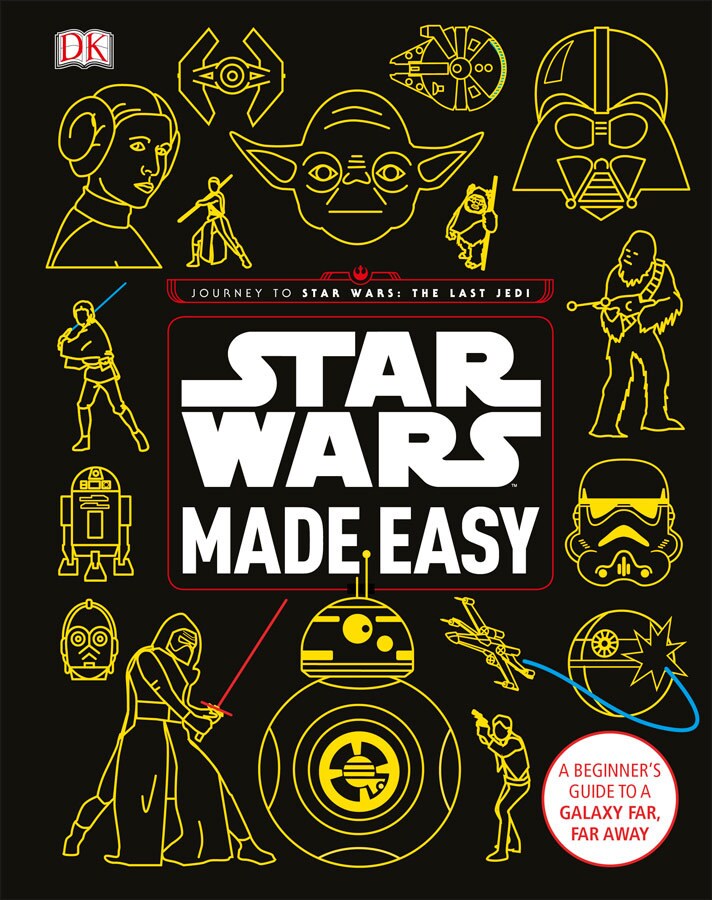 StarWars.com: Star Wars Made Easy pulls together the basics to understanding what Star Wars is all about. Who is this book for?

Christian Blauvelt: To paraphrase Obi-Wan, Star Wars Made Easy is about helping you take your first step into a larger world -- the world of Star Wars. It’s for newbies to the saga, who maybe have seen some of the films but not all or maybe none of them, and want to know what all the fuss is about. And make sense of all of the in-universe lingo that fans love. If you don’t know the difference between a Jedi or a Jawa or between a wampa and a Wookiee, this book is for you. It’s for new fans who want to learn more about Star Wars, but don’t really know where to start -- there’s a lot of Star Wars storytelling out there and this will help you navigate your way around the galaxy. Not to mention that it’ll help you make sense of all the Star Wars references in other films and TV shows that have been made over the past 40 years since A New Hope was released. Having Star Wars literacy means having pop culture literacy. 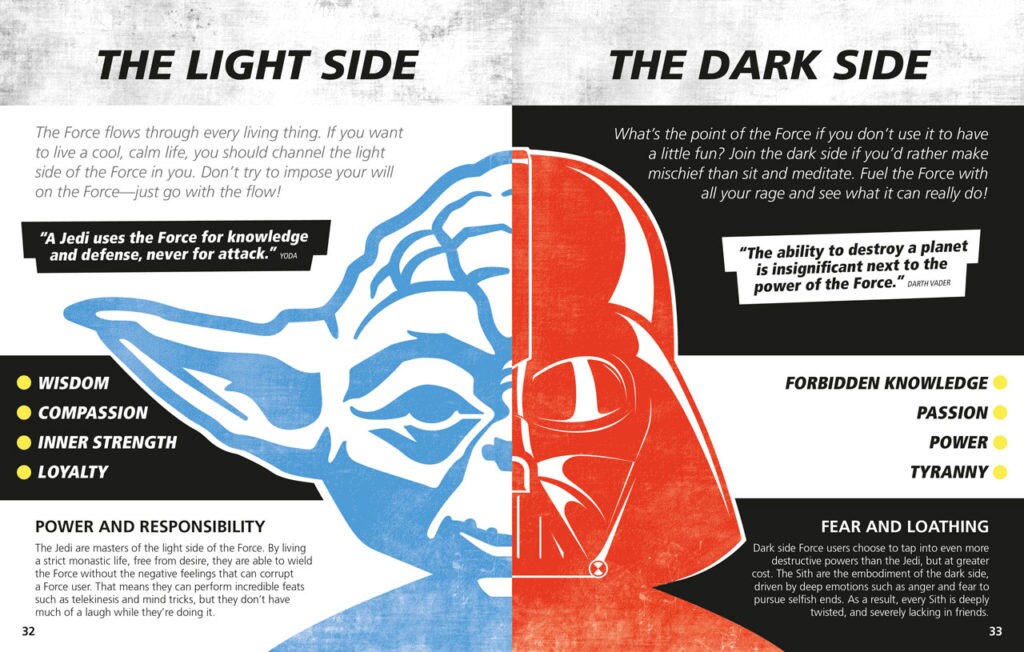 StarWars.com: What might more knowledgeable fans get out of this book?

Christian Blauvelt: Star Wars has been part of my life for over 20 years, so what was fun about writing this book was stepping back and trying to look at the saga from the perspective of a newcomer. What it would be like to see A New Hope -- or any of the films -- for the first time? There’s something special about that. I mean, diehard fans who’ve been with the saga for decades can kind of take certain concepts and ideas for granted in Star Wars -- I certainly have. But how exactly does hyperspace work? What really is so bad about the dark side? I tried to look at those questions with fresh eyes. And I think the experience of reading this book for more knowledgeable fans will be one of reconnecting to the basics of this universe we love and almost experiencing it again as if you’re just discovering it. I also tried to be funny throughout. I’ll leave it up to the fans to decide if I succeeded in my comedic slant, but if you step back and examine a bunch of Star Wars plot points with fresh eyes, so much of the comedy comes naturally. I mean, when you think about it, Vader’s idea of trying to freeze Luke to send him back to the Emperor is so crazy, it’s funny. Who would think that’s a viable way of transporting someone? Especially when that person is your son? So that’s why I felt I had to clarify on page 76, “Lando doesn’t make a habit of freezing people in carbonite.” And then go into the sadness of him leaving Lobot behind on Cloud City the Imperials below and why he appears to take Han’s clothes.

StarWars.com: How is Star Wars Made Easy organized? What types of info does this book contain?

Christian Blauvelt: We get a lot into the “what” of Star Wars here, but an even more important question is “why” -- why should you care about Star Wars? Why is it so popular and matter so much to so many? That’s how the book starts off, and then we get into the “what” questions: What is the history of the Star Wars galaxy and what are the different groups who live there? What is hyperspace and how does it work? What is the Force and what exactly do we mean by the light side and dark side? What is a lightsaber and how does it work? There have been entire books on vehicles of the Star Wars galaxy -- we’re reducing that information to a two-page spread. That way, a newcomer to the saga won’t feel overwhelmed. And it reminds diehard fans what are the most important elements of Star Wars; this is also a guide for the longtime aficionado to figure out how to most succinctly -- and hopefully, wittily -- communicate the key ideas of Star Wars to newcomers so that we can win over new fans. I had no one to talk to about Star Wars when I was growing up, so I wish I had had this book then to figure out how to get my friends and family interested in it and then have someone to talk to about it!

StarWars.com: Star Wars Made Easy looks at the basics and then dives into each film, from A New Hope to Rogue One and The Last Jedi, and even gives the skinny on The Clone Wars and Rebels. How did you determine what basic questions needed to be answered about each film and about the franchise in general?

Christian Blauvelt: It was all about boiling it down to the basics. Figuring out how to describe hyperspace had to start with a more direct question, “How do they get around in that galaxy far, far away?” And from there it’s a matter of thinking about what questions do I know a lot of fans still even have about these concepts. Some of this info is still being created -- we only just learned in the past couple months from Charles Soule’s new Darth Vader comic series for Marvel how it is that a red lightsaber blade is created. Other things require just a bit of logic to puzzle through: is that a writing error when Han boasts about making the Kessel Run in 12 parsecs, since a parsec is a unit of distance, not time? And then, of course, I proceed to show that actually he was dead right by saying that because traveling a shorter distance like that required more powerful engines and the ability to traverse a more dangerous route -- something totally worth boasting about.

StarWars.com: One of the fun things about this book is the brief snarky descriptions of the good guys and bad guys in each film, like Darth Vader in The Empire Strikes Back being labelled, “Former Jedi, desperate father.” How did these come about?

Christian Blauvelt: This is my magazine-writing experience at Entertainment Weekly coming into play. In my four years there I learned how to “write to fit” into an already designed layout. So then how do you convey the essence of a character in four or five words? Usually, leaning into the comedy is the way to do that. But then, if you have a number of characters right next to each other, how can they bounce off each other, so you not only learn something about each individual but about their relationships. So for Leia in The Empire Strikes Back, I simply reduced her description to “skeptical about frenemies.” Then, of course, Lando had to be “ultimate frenemy.” Which means you now know something about how Leia and Lando interact, as well! This really was one of the most fun parts of writing this book, for sure.

StarWars.com: The book takes time to weigh in on common fan discussions about Star Wars such as the merits of Ewoks, Rey’s identity and skills, and the debate over who shot first in the cantina. Why are these important to include?

Christian Blauvelt: I focused a lot on questions that have consumed fandom and that non-fans might have heard but don’t really understand without context: Who shot first -- Han or Greedo? Why is there such hate in fandom directed at Jar Jar? Are Ewoks awesome or lame? (Obviously awesome, and I still have my stuffed Ewok I bought 20 years ago from the Endor Vendor at what used to be Disney’s MGM Studios.) This gets back to “why” being the all-important question of the book. Star Wars is about people and about emotions -- and it’s also about the fans and their feelings about the saga. If you’re new to Star Wars you’re definitely going to hear these debates play out. It’s important to tell new fans why they should care about these debates.

StarWars.com: How does the DK style of self-contained spreads incorporating images and text lend itself to this book’s goal of making Star Wars easily absorbed? Tell us more about the artwork and drawings in this book.

Christian Blauvelt: Design is so fundamental to Star Wars -- in fact, it’s a part of the storytelling. Just seeing the austere monochromatic look of the Imperial ships tells you a lot about them. The aesthetic is part of the characterization. So it was essential that we provide a visually lush and design-heavy treatment in Star Wars Made Easy. And my, did the design team at DK deliver. If I were still working for a print magazine, and if I were in a position to hire designers, I would try to hire all of DK’s designers who worked on Star Wars Made Easy. Such a talented team. I particularly love their renderings of the various battles in Star Wars – when I debuted Star Wars Made Easy at Fan Expo Canada on September 1, the Battle of Hoth spread was part of my PowerPoint presentation to a live audience. Going over the design and layout of the battle made me feel like I was leading a rebel briefing. These are graphics that don’t just make Star Wars more accessible -- they’re really, really fun.

StarWars.com: How does this book prepare fans for The Last Jedi?

Christian Blauvelt: We do indeed have some teases for The Last Jedi here that at least hint at some answers to the questions we were left with at the end of The Force Awakens: Where is Rey? What now for the Resistance? What has happened to Finn? Who is Rose? Will Luke actually say anything in this one? And I believe Star Wars Made Easy exclusively debuted a new species of “space horses” called fathiers that the swanky gamblers of Canto Bight like to bet on. Plus, more on the vehicles that had already been announced: the “gorilla walkers” and TIE silencer.