Younglings and Padawans will find much to read this summer.

For many a youngling, school is finishing up for the summer, and this means a whole season of enjoying fun in the sun with friends and family. Sure, there’s swimming and biking and video games, but there’s also a whole world of cool Star Wars books to check out. “Read, you must!” a wizened Jedi Master once told me. Or maybe it was on a poster of Yoda in the library when I was a kid. So whether your favorite little Jawa is still in diapers or finishing up grade school, StarWars.com has a list of some of best new and upcoming Star Wars reads for children this summer (or winter, for our Southern Hemisphere readers). We guarantee they’re a bantha-load more fun than playing chance cubes with Watto, and you might just earn some extra portions -- or maybe some extra credit -- when school starts in the fall.

For the youngest of the younglings: (from babies to preschool): Have you FELT a disturbance in the Force? Jack and Holman Wang have turned their love of Star Wars and needle-felting into a set of three awesome books: Star Wars Epic Yarns series from Chronicle Books. Each volume covers one of the original trilogy films, and features 12 iconic scenes, handcrafted in felt and summarized in just a single word. These sturdy books are a great way to introduce your toddler to the classics. 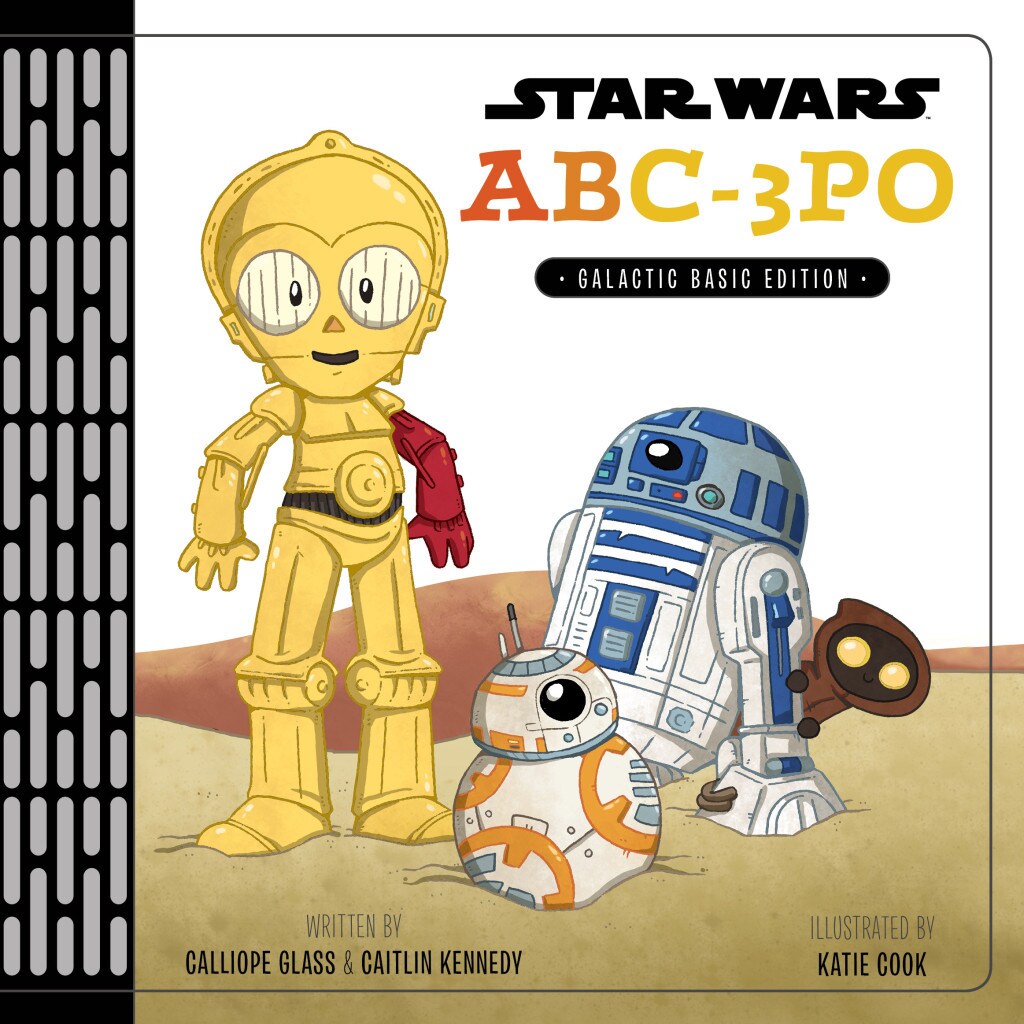 Ready for your ABCs? Out next week from Disney-Lucasfilm Press is ABC-3PO: Alphabet Book. With rhymes by Calliope Glass and Caitlin Kennedy and wonderful illustrations by Katie Cook. StarWars.com senior writer/editor Dan Brooks previously interviewed Katie Cook about her artwork for the book. While your youngling will be learning the alphabet, you’ll probably be getting a kick out of the subtle details in the illustrations. For Little Golden Books fans, there’s been an awakening of Star Wars books told in this classic format. Last year saw the release of versions of Episodes I through VI, and this spring The Force Awakens came out as a Little Golden Book from Random House Kids, balancing the story of the film with toning down the intensity to make this more toddler-appropriate. Also recently released are the three books, I Am a Jedi, I Am a Pilot, and I Am a Droid, which explore the different aspects and activities of those roles. Coming out in July are two more in that series: I Am a Sith, and I Am a Princess.

Just learning to read? Check out some new readers now out this June from DK Publishing, including the Level 2 book: The Adventures of BB-8. This reader by David Fentiman follows the adventures of the rolling droid hero through the events of The Force Awakens. For more advanced learners, there’s the Level 3 reader, Finn’s Mission, also by Fentiman, which tells Finn’s story as well as presents cool facts reference guide-style. And for Star Wars Rebels fans, a Level 2 reader is coming out in July by Lauren Nesworthy, Darth Vader, Rebel Hunter! Learn all about how Vader hopes to crush our favorite heroes of the Rebellion. For kids at other reading levels, check out previous DK readers, including The Force Awakens: New Adventures for Level 1 readers. Want a good story? Starting school is sometimes a challenge, but for Victor Starspeeder, starting Jedi Academy is going to be so much fun, until Yoda suggests Victor’s excess energy might be best suited for drama club. Will Victor finally make some friends, get on his older sister’s good side, and save the show? Find out in July with the release of A New Class by Jarrett J. Krosoczka, in the NYT-bestselling Jedi Academy series from Scholastic. 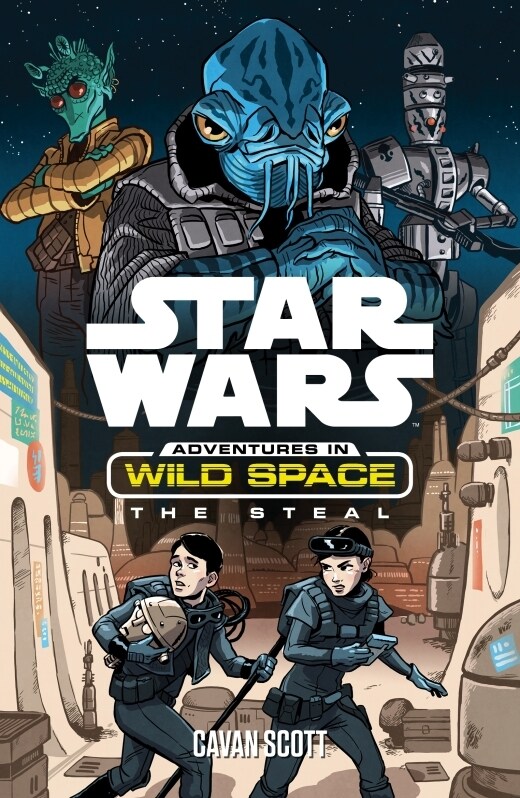 Summer’s a great time to go wild -- or maybe go to Wild Space! Readers in Europe will be getting two more stories in the Adventures in Wild Space series from Egmont UK at the end of June. Milo and Lina are searching across Wild Space for clues leading to their parents, taken by the Empire. In The Steal by Cavan Scott, the siblings are stuck pulling off a heist on Lothal, while in The Dark by Tom Huddleston, the two are stuck adrift, with a criminal on the loose, and something even more sinister out there.

Love your LEGO Star Wars? Then DK’s new guide, LEGO Star Wars: Chronicles of the Force by Cole Horton and Adam Bray is for you! This book covers up the latest LEGO Star Wars sets, with tons of facts about Star Wars characters and their minifigures in exciting spreads. Plus, it includes an exclusive minifigure of one of Unkar Plutt’s thugs! Whether you pick it up and read a page or two, or devour it cover to cover, this book is definitely worth 60 portions. 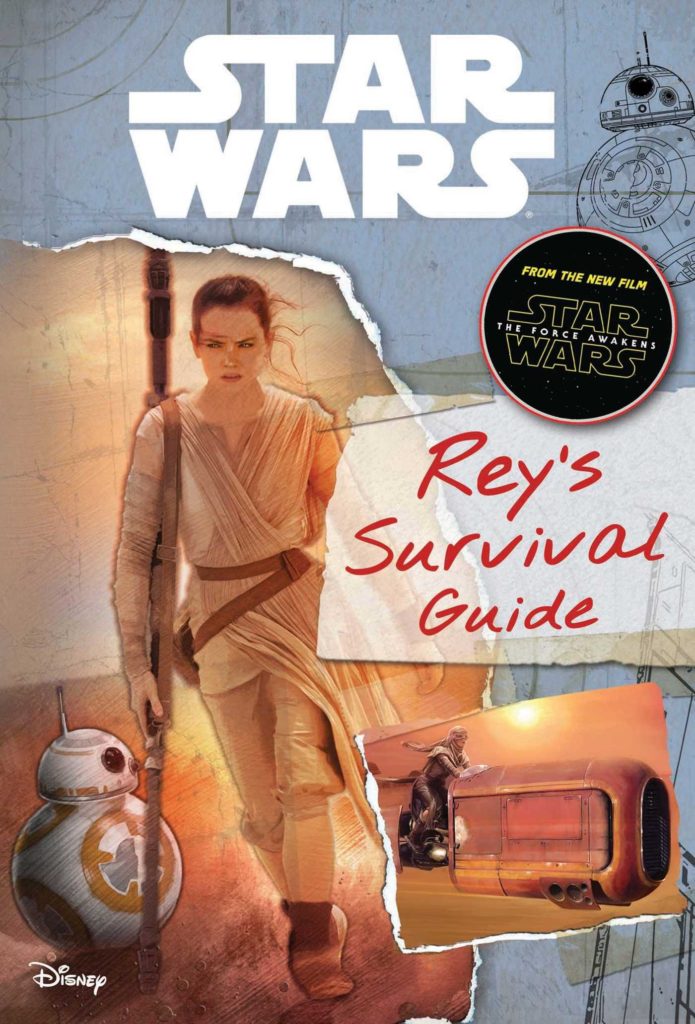 Are you all about Rey? Be sure to check out Rey’s Survival Guide, written by Jason Fry and illustrated by Andrew Barthlemes, from Studio Fun International. Told from Rey’s point of view, this replica journal has stories, drawings, and survival tips from your favorite Jakku denizen. For more first-person account fun, keep your scanners checking for Poe Dameron: A Pilot’s Logbook by Michael Kogge coming out this September. 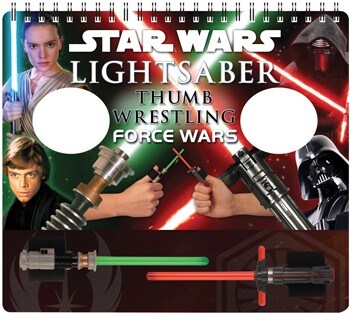 Need to practice your lightsaber skills but don’t have a lot of space? Why not let your fingers do the fighting with the Lightsaber Thumb Wrestling Force Wars from Chronicle Books? This Star Wars game in a book by Pablo Hidalgo lets you and a friend battle it out thumb to thumb. Coming out in August 2016, it includes two plastic lightsabers that attach to your dueling thumbs with Velcro, and has seven “game board” spreads to set the stage for the fate of the galaxy, including new match-ups from The Force Awakens. Don’t let the dark side of the nail prevail!

Would you rather build than fight? Coming out in early August from DK, LEGO Star Wars: Build Your Own Adventure gives model builders a chance to create their own Star Wars adventures with 50 different model set ideas to inspire the imagination. With projects ranging in difficulty from easy to harder, this book helps unlock creativity in both constructing Star Wars themed builds, and playing our your own Star Wars stories. And it comes with a Rebel pilot minifigure and pieces to build a Y-wing! Time to brick on the entire Empire!

For those ready to be teleported off this rock (middle school and beyond):

As we approached the release of The Force Awakens last year, we had a Hutt’s bounty of great middle school and young adult books, and that has continued into this year. A trilogy of books in the Journey to the Force Awakens line brought us some classic trilogy adventures with Princess Leia, Luke Skywalker, and Han Solo, and these even teased some hints to The Force Awakens. Now might be a good time to go back to these books from Disney-Lucasfilm Press and see how they hid some secrets for Episode VII. In The Weapon of a Jedi by Jason Fry, Luke follows the Force, and winds up with Artoo and Threepio on a jungle planet with a Jedi connection, but is there more than the aspiring Jedi can handle? In Moving Target by Cecil Castellucci and Jason Fry, Leia leads a dangerous decoy mission with Nien Nunb, but the Empire keeps striking wherever they go. And in Smuggler’s Run, Greg Rucka relates an adventure of Han Solo and Chewbacca in the days after the destruction of the Death Star. All three also have some fantastic artwork by Phil Noto.

Fitting along neatly with that series is Before the Awakening, which came out last December, also by Greg Rucka, with illustrations by Phil Noto, and which tells the stories of the new heroes of The Force Awakens. Readers will dive deeper into the training and motivations of First Order Stormtrooper FN-2187, see a certain scavenger learn a hard lesson about life on Jakku, and witness how Poe Dameron’s concern about a resurgent threat leads him out of the Republic and into the Resistance. 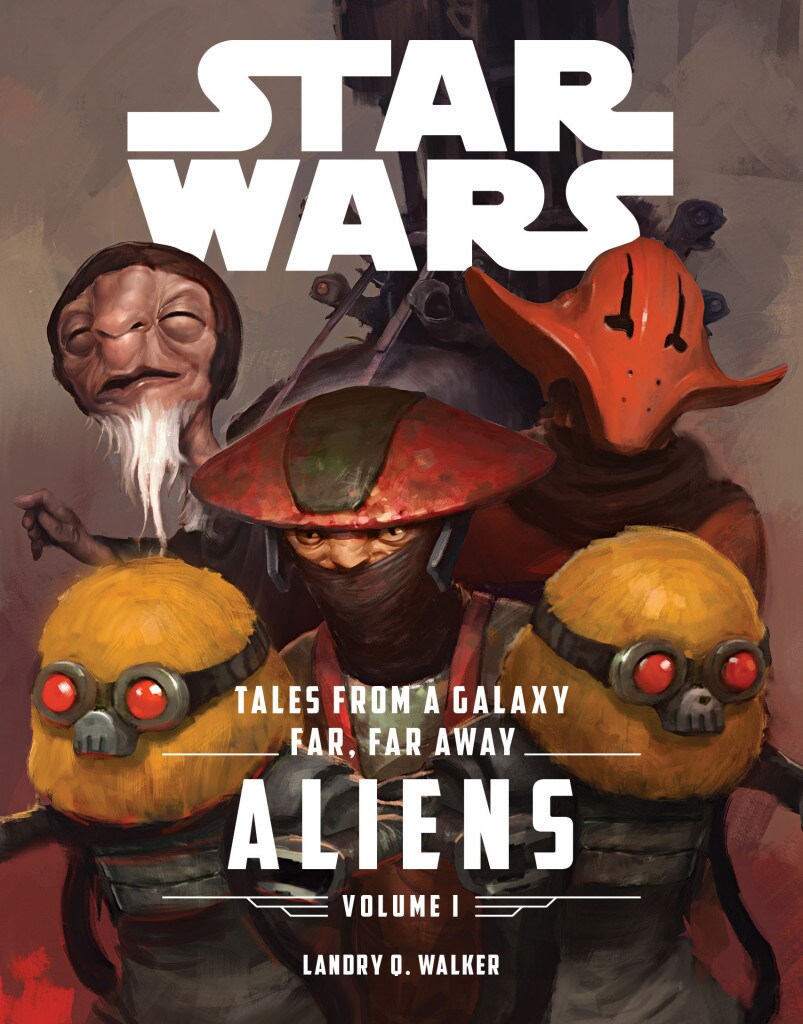 Out more recently is the collection of novellas, Tales from a Galaxy Far, Far Away: Aliens Volume I by Landry Q. Walker goes in depth into the lives of some of the characters seen in The Force Awakens including Unkar Plutt, Bobbajo, and the Crimson Corsair. You can learn more about these different tales from our April interview with the author.

From a certain point of view? While you might know the original trilogy, you might not know it quite like this! Last year, we had some great authors put their spin on Episodes IV, V, and VI. Alexandra Bracken’s retelling of A New Hope in The Princess, the Scoundrel, and the Farm Boy gives some greater depth to our heroes as they contend with the roles they have, and the people they are destined to become. So You Want to Be a Jedi? by Adam Gidwitz puts you in the role of Luke Skywalker as he goes through the events of The Empire Strikes Back, and provides your own Jedi training! And in Beware the Power of the Dark Side!, Tom Angleberger amps up the intensity of Return of the Jedi with more of everything, including Ewok ferocity! 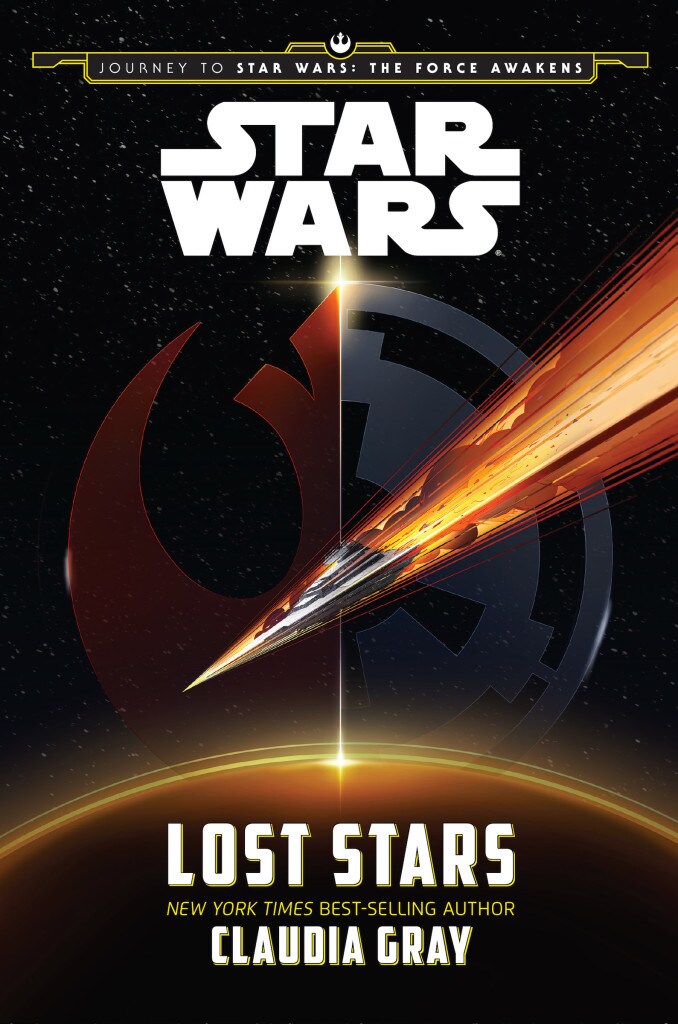 Finally, if you haven’t gotten your hands on it yet, grab a copy of the young adult novel Lost Stars by Claudia Gray, the author of the latest Star Wars novel, Bloodline. Lost Stars follows two would-be pilots as they escape their homeworld for a new life in the service of the Empire, only to end up on opposite sides of the galactic civil war, yet unable to break away from each other’s orbit. Through the story, we see the events of the original trilogy from new points of view from before Alderaan’s destruction through to the Battle of Endor and the Battle of Jakku. Does it feel like Jakku outside? Why not make your mouth as cold as Hoth with some yummies from Ice Sabers from Chronicle Books, which comes with a Star Wars cookbook with 30 recipes specializing in easy-to-make sweet, chilled treats, and comes with four lightsaber ice pop molds.

So now that you’ve got some idea what cool ways you can read more Star Wars this summer, hop on over to your local bookstore or library, and check it out, and may the Force of reading be with you!