An energetic Luke, bickering and playful Han and Leia, and Artoo heroics make for a masterclass in Star Wars storytelling.

Still bummed that there were no new Star Wars comics last week? Never fear: Comic Book Galaxy is here, and while there are none to highlight from last week, there is plenty to be excited about today. Of course, I’m talking about Star Wars #23, featuring the aftermath of Luke, Leia, and Han’s dramatic capture of the Star Destroyer Harbinger. If you thought capturing a Star Destroyer was exciting (and with that space battle from issue #22, I’m right there with you!), just wait until you see the last page of this issue. In fact, Star Wars issue #23 is so great, we’re going to take a closer look at it in Word Balloon.

Let’s not live in the past. We’ve got some Star Wars comics to read!

Top of the Stack: What’s Out This Week

After successfully capturing the Star Destroyer Harbinger, Han Solo, Princess Leia, and Luke Skywalker find themselves with even more issues to tackle. Chief among them is making sure they don’t get blown up; there’s a reactor to jettison if they want to ensure they don’t lose the Star Destroyer, as well as their lives. Han and Leia provide some explosive moments too, especially when the two debate who the captain of the Harbinger will be for the duration of the mission.

In Top of the Stack (you know, like 5 seconds ago), Comic Book Galaxy tried to highlight some of the best moments of issue #23 of Star Wars in a paragraph. That’s not easy, especially since each page of the issue feels like classic Star Wars. It’s like a recipe for great Star Wars storytelling.

The ingredients include classic dialogue, larger than life action sequences, and telling character moments. This is precisely why we need to take an even closer look at Star Wars #23. In a book full of highlights, here are few that capture so much of what we love about the Star Wars saga.

On page 3, Luke has successfully ditched the reactor, and exclaims, “Ha ha! We’re in hyperspace! We did it!” as Chewbacca shares his emotions; the two triumphantly raise their hands with pride. He’s pumped, as Artoo’s last minute heroics once again save the day.

Simultaneously, Leia finds herself in an awkward situation, as the explosion has placed she and Han closer to each other than she would like. Han is in full on scoundrel mode as he slyly states, “It’s okay, your highness. You can hold me a little while longer if you’re still scared.” Her response is classic Leia: “Get.” “Off.” “Me.” “Now.” No exclamation. No nonsense. Leia is not impressed with Han’s banter. And by the way, the farm boy is completely oblivious.

Bonus: Page 10, however, shows that Captain Starros knows differently, in spite of Threepio’s bemusement. Check it out.

As with many classic Star Wars stories, this book starts in medias res, and follows with a flashback to General Dodonna, Admiral Ackbar, and Mom Monthma discussing how to get food and supplies to Tureen VII. The Empire has set a blockade, and Luke and Leia both decide, at the exact same moment, that the best course of action is to use a ship that’s “Star Destroyer big.'" 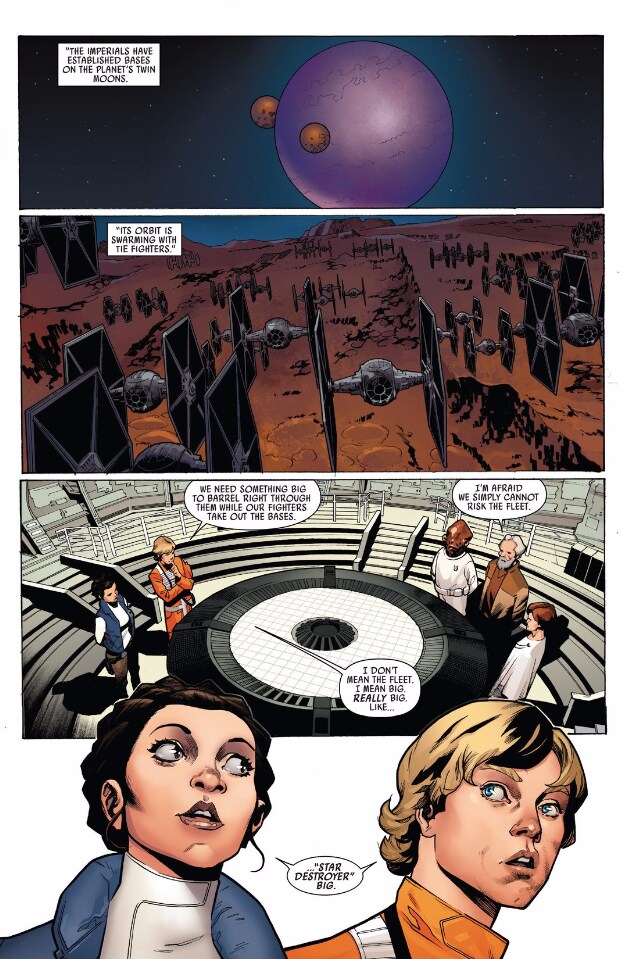 Now we know how the idea for swiping the Harbinger came about, but it’s the way Luke and Leia glance at each other that’s timeless Star Wars. Jason Aaron and Jorge Molina really capture their true familial nature in the panel on the bottom of page 5. Not only do they say the same thing, but they look identical here as well.

Bonus: Mon Mothma’s response to the idea, “If anyone else in the Alliance dared suggest an idea such as this, I would likely recommend them for psychological testing. But when Luke Skywalker and Princess Leia suggest it….” Good luck trying not to smile when you read that; vintage Star Wars.

At first glance, the cover may appear not to be connected to the interior of issue #23. This is definitely not the case, and it's the subtlety of the image that makes it more powerful. In a moment of indecisiveness, Han and Leia do not agree (no surprise there) on how the mission should proceed, or who should make the final call. In other words, who’s the captain of this ship? 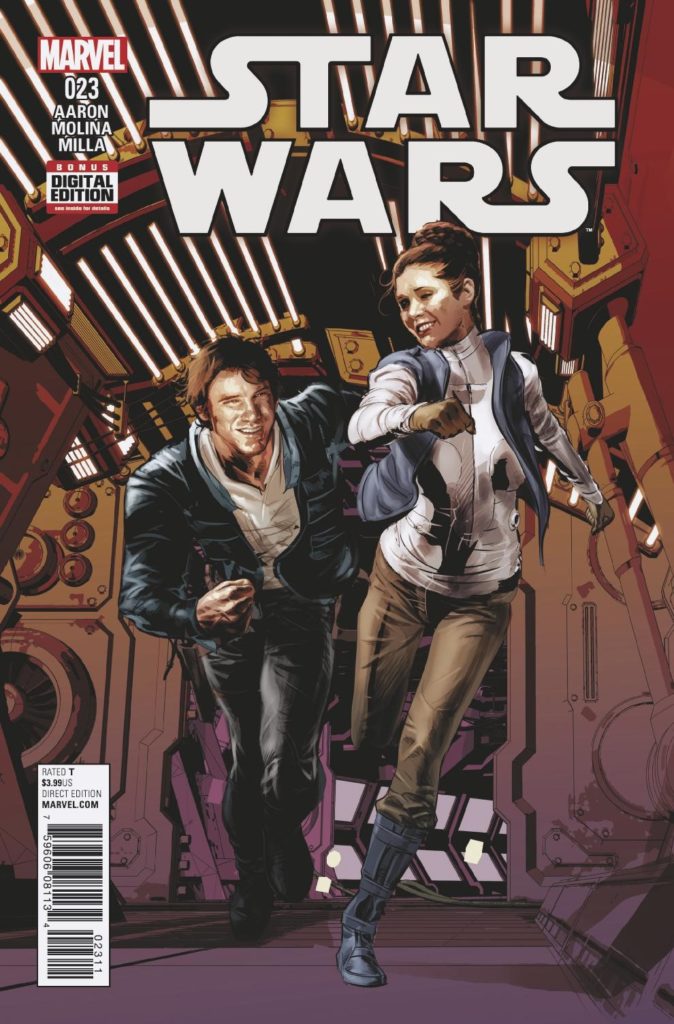 Han’s got an idea: “I’ll race you for it.” Initially, Leia seems disgusted, but she puts her best foot forward (after you read it, you’ll appreciate that pun), and gets a head start. The race serves as a nice juxtaposition for the impending doom that is approaching and features some fantastic character moments between the two. You can almost hear John Williams scoring this scene. Truly epic.

Bonus: Han Solo takes back the advantage on a speeder bike!

Every page of Star Wars #23 features inspired Star Wars moments that transcend the comic book page. Jason Aaron and Jorge Molina capture the joy, action, and character moments that are classic Star Wars through and through, and it’s a heck of a good read. What moments in this issue stand out for you? Leave a comment below!

See you at the comic shop next week!