If you have been reading Star Wars comics in the past month, you’ve experienced some great storytelling. In Poe Dameron #14, General Leia and the guy who can fly anything discuss the future of the Resistance, and in Screaming Citadel #1, the unlikely team of Luke Skywalker and Dr. Aphra encounter a new kind of scum and villainy in the galaxy. The story of their team up continues in Star Wars #31, and Darth Vader makes his return to monthly comics in the pages of an all new, self-titled book, with the energy and power we have come to expect from the Dark Lord of the Sith. There is also much to learn in the new title, which will be explored in Word Balloon. Here is a look at some of the Star Wars comics released over the course of the past month.

The Month That Was 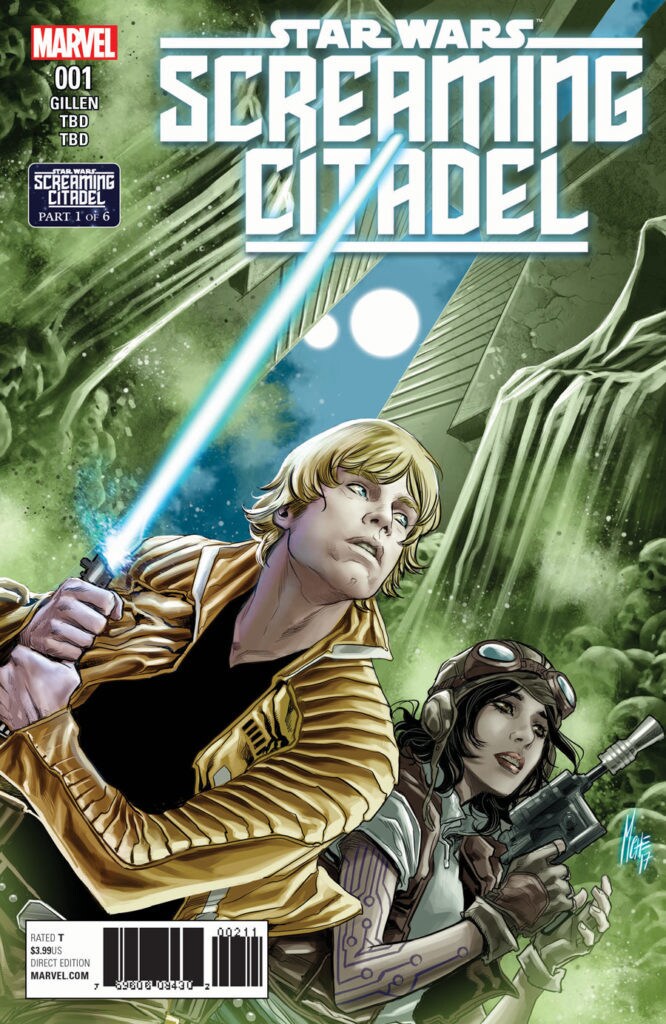 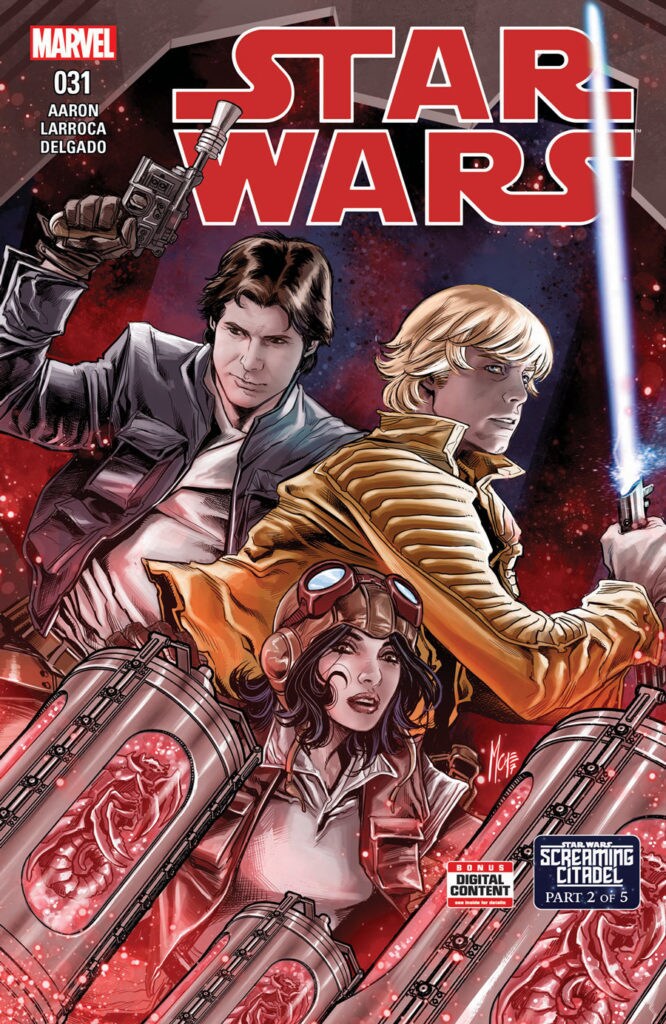 Darth Vader is the newest monthly Star Wars title, and takes place immediately after Anakin Skywalker is encased in Vader’s iconic black armor in Revenge of the Sith. The first issue, written by Charles Soule and penciled by Giuseppe Camuncoli, provides new information on Vader and Emperor Palpatine’s relationship, shows us his first solo mission in his new costume, and begins to reveal how Darth Vader gets his Sith lightsaber. Here are some highlights! 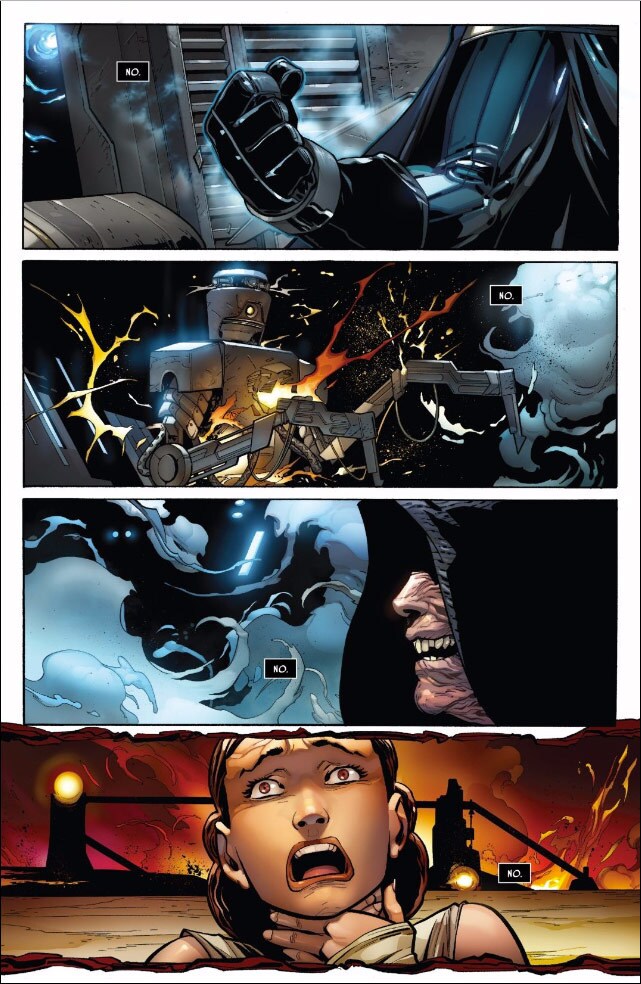 In Revenge of the Sith, audiences witness Darth Sidious telling Darth Vader that he killed Padmé out of rage. However, what we didn’t see is the aftermath of this conversation. The first panel showcases just how powerful Darth Vader is, much to Palpatine’s surprise and chagrin. Palpatine is slammed (via the Force) into a wall, courtesy of Vader’s intense anger. The psychology of their relationship is manifest in Sidious’ response to this shocking turn of events, and gives more context to the master/apprentice dynamic. There’s a significant threat involved that cements their relationship for the next 19 years, too.

In Chuck Wendig’s novel, Empire’s End, it is reinforced that Mas Amedda is nothing more than a figurehead for the Empire. In Darth Vader #1, however, we see the public personae he has crafted for himself, and the charisma he exudes. His venom is palpable, and he also continues Palpatine’s mission to eradicate the existence of the Jedi from the general public. This sequence also shows us what happened to many of the lightsabers of the Jedi. The symbolism of this destruction is shocking, permanent, and powerful. 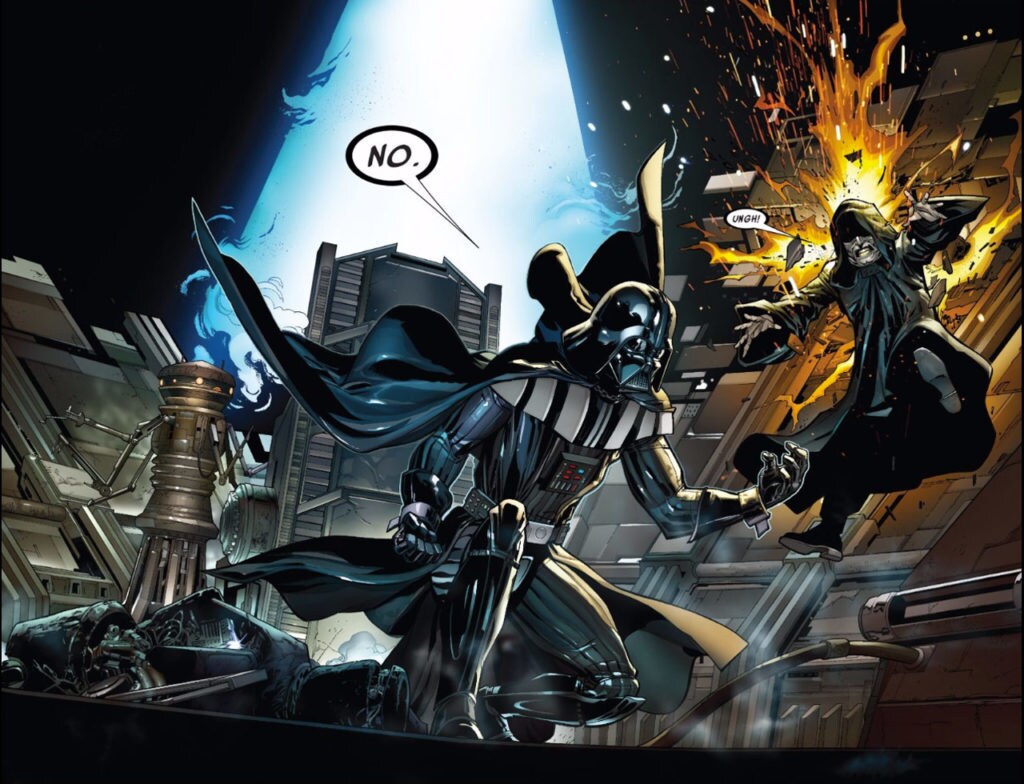 The origin of the red lightsaber blade

A standout moment of Darth Vader #1 is undoubtedly the moment when Darth Sidious tells his new apprentice why Sith blades are red. Sidious reveals that Vader must “… pour your [Darth Vader’s] pain into the [kyber] crystal and when, at last, the agony becomes more than it can stand … a beautiful crimson. The color of your rage.” This is another shocking example of how the Sith subvert the nature of the Force in all living things, and warp what was once good into something twisted and unnatural. In essence, Vader’s lightsaber blade could be considered as tragic as the former Jedi Knight himself.

How Darth Vader will become in possession of his Sith hilt has yet to be revealed, but this moment will unquestionably add to the legacy of the fallen Jedi.

What did you think of Darth Vader #1? Let us know in the comments below!

Dan Zehr is a high school English teacher with an MS in Teaching and Learning, and is the Host and Co-creator of Coffee With Kenobi, a Star Wars podcast that analyzes the saga through critical thinking, analysis, interviews, and discussion. He is also the rebel teacher in the Target Rogue One commercial, and is an avid comic book consumer and longtime reader of the medium.