Better Than Beskar: Inside Columbia’s New Star Wars Collection Inspired by The Mandalorian

If you’re a fan of Star Wars and Columbia Sportswear, the holiday season is extra special. Every December since 2016, Columbia has released limited-edition Star Wars outwear that blends the company’s design expertise with the galaxy far, far away in delightfully creative ways. The collaboration kicked off with a Rogue One­-inspired line, bringing the utilitarian looks of Jyn Erso and others to functional outwear; 2017’s range took inspiration from Star Wars: The Empire Strikes Back’s Echo Base, offering fans a chance to wear modern takes on the style of Han and Leia’s classic Hoth coats; 2018 saw a painstakingly-researched and crafted recreation of the crew parka from The Empire Strikes Back; and last year, the light and dark sides of the Force fused with Columbia’s celebrated Challenger jacket.

Which way would Columbia turn for 2020? The way, of course.

Launching December 4 at 12:01 am ET on columbia.com/StarWars, Columbia’s latest Star Wars collection takes inspiration from The Mandalorian, now in its second season on Disney+. The line, continuing Columbia’s smart take on Star Wars fashion with subtle detailing and in-world references, features offerings for adults and children. The Mandalorian Interchange Hybrid Jacket (MSRP: $300), based on Din Djarin’s beskar armor, comes with a removable vest and recreates the plated look of the character’s gear. (For just one of the range’s many fun Easter eggs, check out the jacket’s inside pocket.) The Mandalorian Helmet Gaiter (MSRP: $40) is designed in the image of its namesake, with water-resistant fabric, fleece lining, and stretchy soft shell construction; The Child Bunting (MSRP: $50) incorporates the Child’s trademark ears, and will protect your child with an ultra-soft microfleece and Sherpa lining; The Child Jacket (MSRP: $75-$80), a youth jacket that includes a hood with stowable ears and more surprises, features a water-resistant shell and Omni-Heat thermal-reflective lining, as well as a cozy Sherpa fleece hood for warmth and comfort; and finally, The Mandalorian Heavyweight Hoodie (MSRP: $120) incorporates elements from the Mandalorian’s armor in a rugged, modern item for brisk days. You may not need to take on a mudhorn, but you’ll feel like you can.

StarWars.com caught up with two of the talented designers behind the collection -- Leigh Roundy and Phil Padilla -- to discuss our emotional connection to the Child, how a Columbia outerwear feature aligned perfectly with Mando’s armor, and why you should brush up on your Mando’a, the language of the Mandalorian culture. 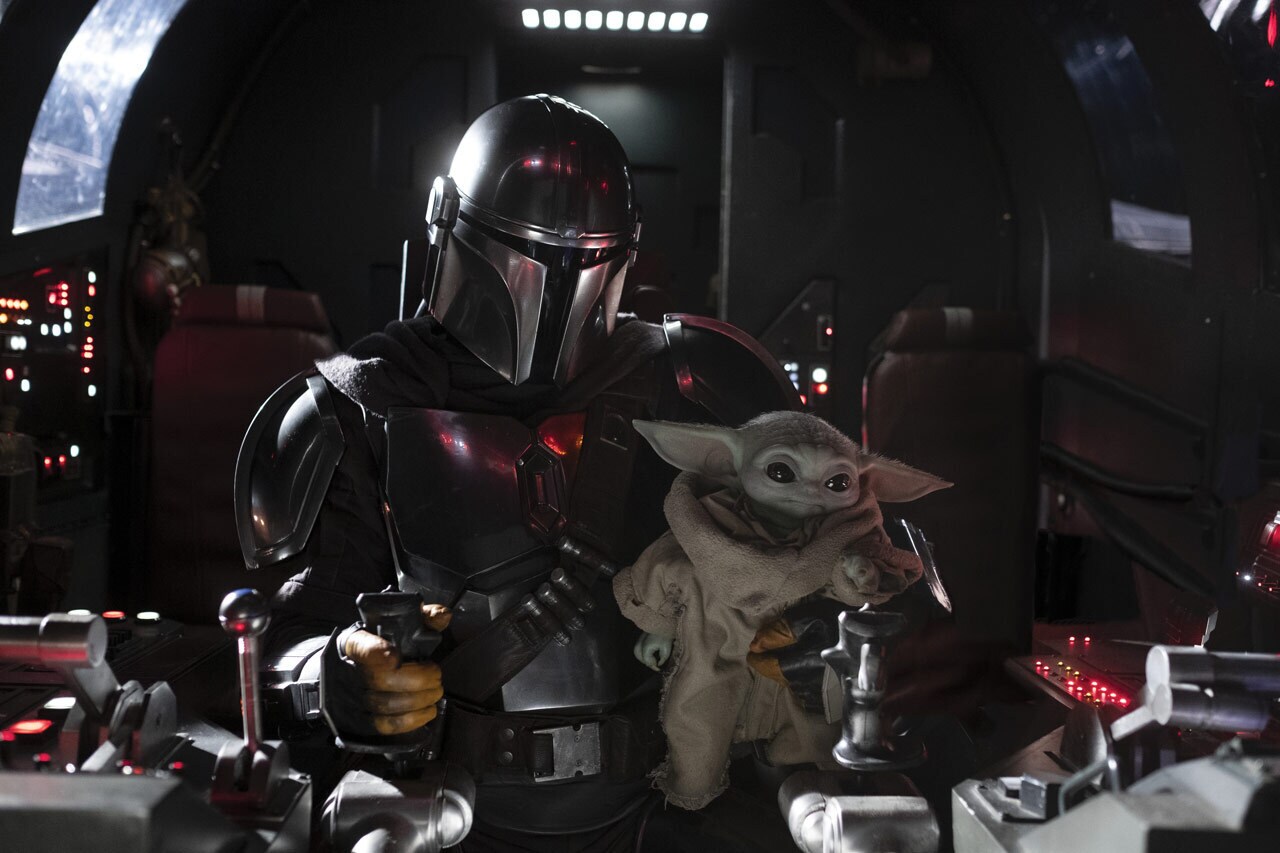 StarWars.com: From a design perspective, what did you think of the characters and world of The Mandalorian when you first saw it?

Phil Padilla: I was immediately drawn to the juxtaposition of the space and Western elements within the characters and world of The Mandalorian. The costume detail on the Mandalorian himself was especially intriguing -- high-shine armor in combination with traditional, rugged fabrications. The Mandalorian and the Child characters were both instantly iconic in appearance and persona, and really drew me in from the beginning. The harsh desert environment mixed with the [space fantasy] elements and vehicles/ships was another standout for me throughout the series.

Leigh Roundy: Din Djarin is extremely striking with his character design. He’s a commanding presence…from the T-shaped visor within the helmet to his newly forged beskar armor. I was also struck by the balance of the technical and natural, rugged elements of the worlds that also influenced the mood of the costuming. And as for the Child, this little one instantly grabs you by the heartstrings and creates an emotional connection. I was immediately drawn to the perfectly oversized proportions of the eyes and ears, the subtle yet charming personality traits, and his connection with the Mandalorian character. 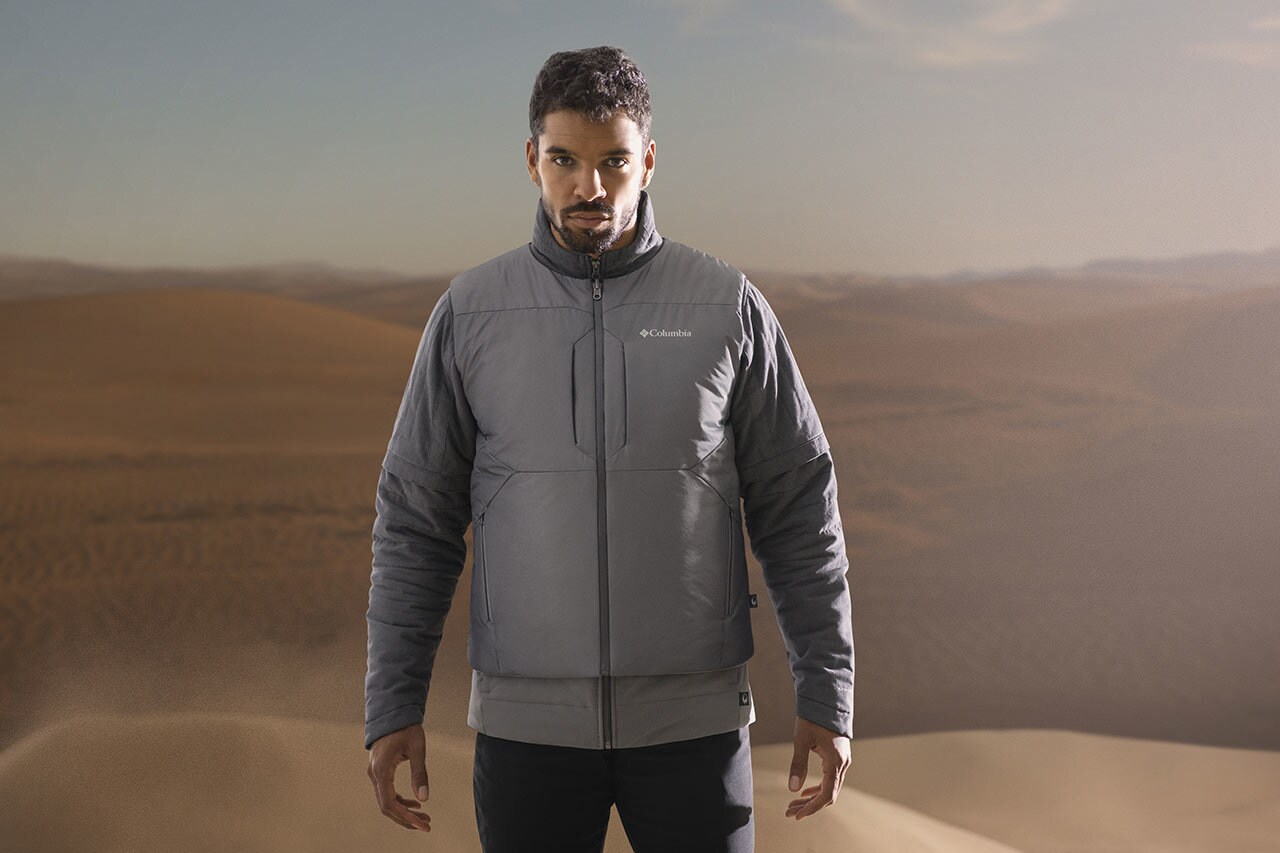 StarWars.com: I love how this collection really incorporates The Mandalorian designs in a subtle way. The Mandalorian Interchange Hybrid Jacket, for example, clearly features Mando's chest plate. But if you didn't know the character or the series, you'd just think it was an interesting design.

Phil Padilla: Working closely with Lucasfilm throughout the design/development journey, one of our main goals was to strike the right balance of character recognition and Columbia brand DNA. The task of taking Mando’s armor/costume and translating it to a wearable, commercially viable product was a great design challenge that our teams really focused on and rose to the occasion to bring to fruition.

Leigh Roundy: After collaborating with Lucasfilm on the direction of this collection, we knew it was extremely important to preserve the essence of not only The Mandalorian brand, but of the Columbia Sportswear brand, as well. This was not a direct character costume translation, which made it different from the previous Star Wars collaborations we’ve done. It was an interesting challenge. There needed to be subtlety and nuance with the piece while maintaining the overall iconic design language of the Mandalorian. We identified that the design lines form his chest plate and, of course, his helmet HAD to be incorporated to give that “tip of the hat” to his character design you see on screen. 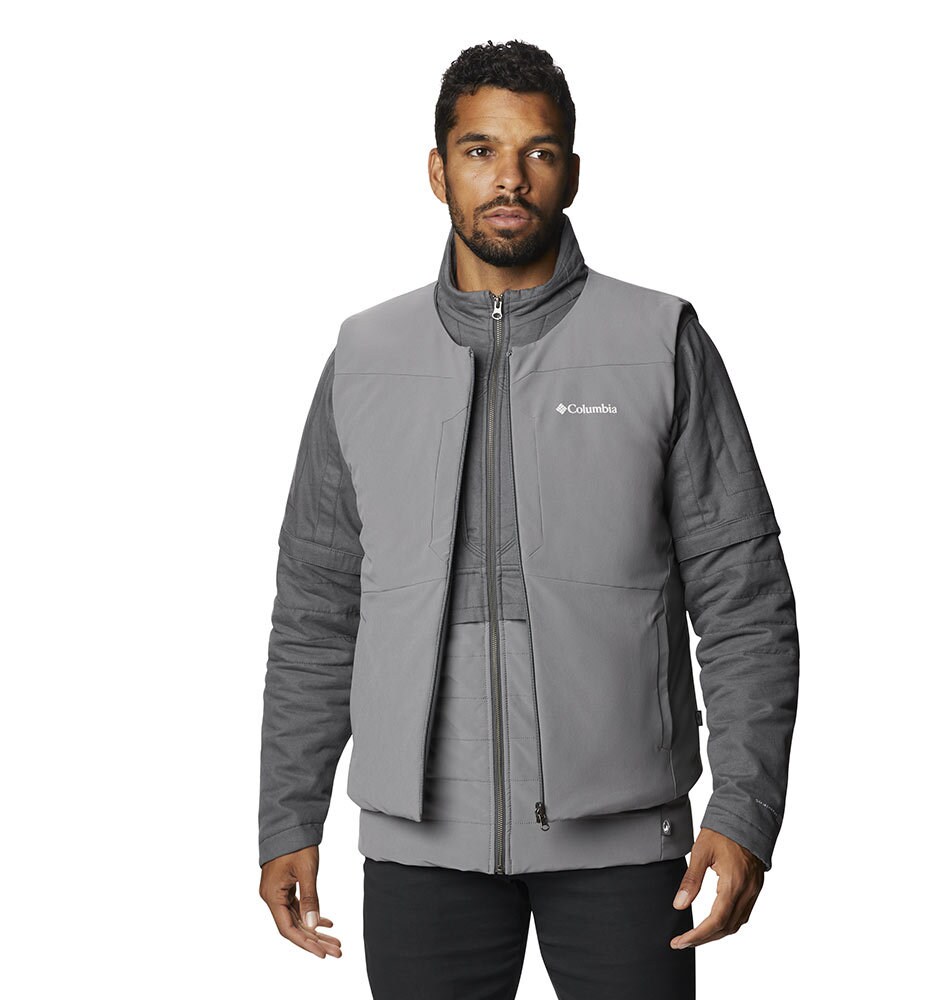 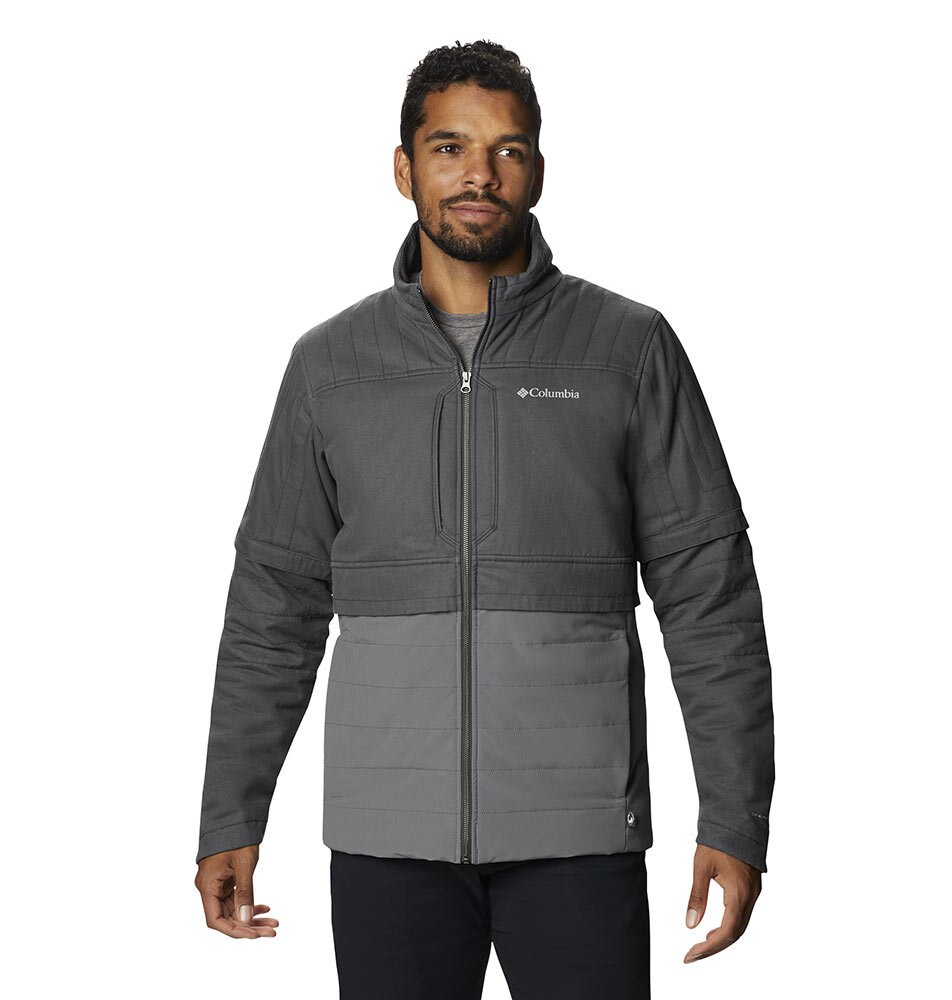 StarWars.com: The Mandalorian Interchange Hybrid Jacket is also true, in spirit, to the Mandalorian's armor, as it's modular. Was that a consideration when ideating on how you would create outerwear based on the character?

Leigh Roundy: That was a huge characteristic of the Mandalorian’s costume I noticed when studying it, the layering and modularity. From this, we thought it would be a fantastic opportunity to take inspiration from our iconic Columbia interchangeable feature and combine it with the essence of the Mandalorian armor. The chrome-inspired fabrication on the vest adds a great visual to the piece, but also adds additional warmth and protection to the wearer, which, again, ties into the Mandalorian character. The rugged layers beneath the armor were important to capture, as well. If you look closely at the arms of our piece, you’ll noticed the detailed stitching and overlays we employed to capture those visual cues. We think those are details that fans will appreciate. And the lightweight insulation and warming technologies are key, as well. He’s out exploring these harsh worlds and needs protection from the elements…which is right up our alley. 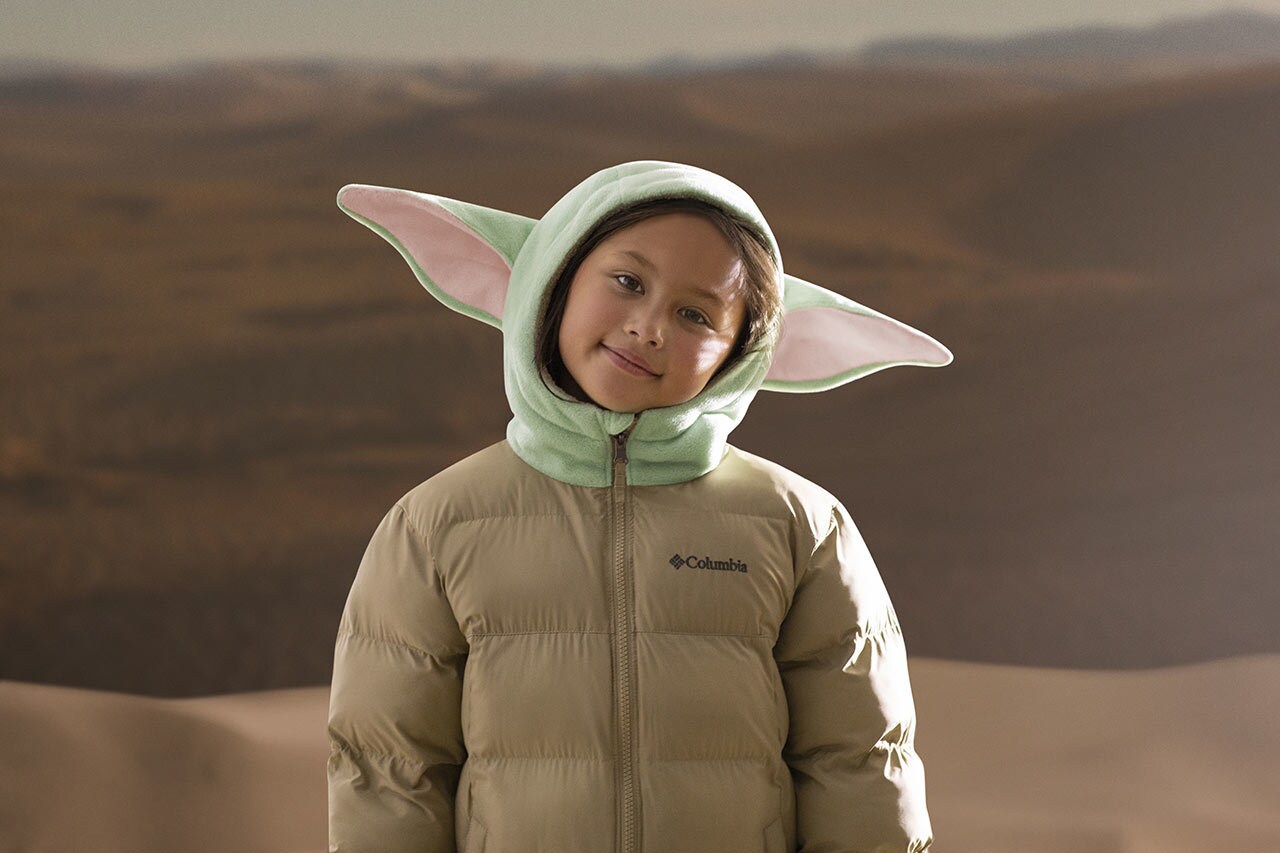 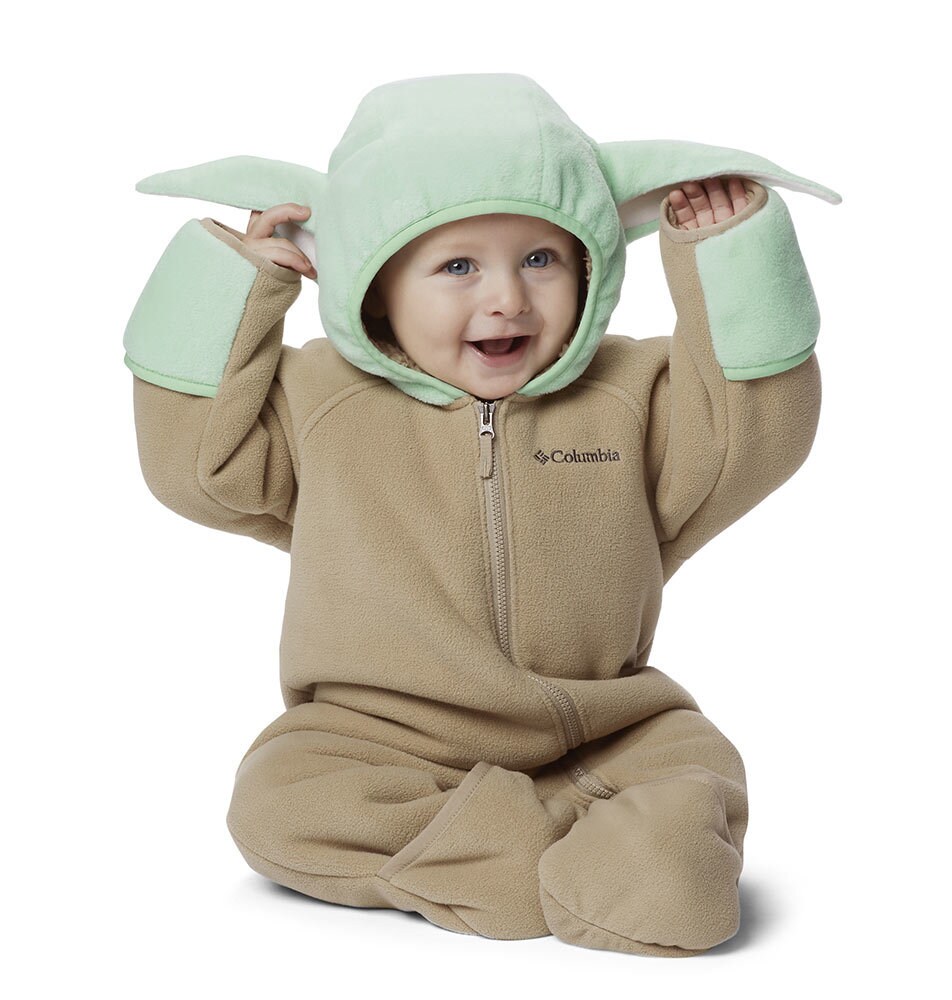 StarWars.com: At the same time, The Child Jacket and The Child Bunting lean into the charm of the character for which they're named, with a really adorable hood that comes complete with big, floppy ears. Was it a no-brainer to go with this approach?

Phil Padilla: We wanted to incorporate the Child character into the collection from Day 1. The immediate allure and pop culture adoption of the Child as an icon from the series was really evident, and it provided a true point of inspiration and emotional connection to design from. The team worked diligently to construct the Child ears accurately to the character and integrate the clever stowable feature on the jacket that allows the wearer to store the ears within the hood if they’d like to.

Leigh Roundy: I’ve gotta say, every time we fit this piece in-house there wasn’t one person that could contain their feels…it generated such a positive energy! I think that was hugely important in the Child pieces, as the Child itself creates such an emotional connection, to Phil’s point, to whoever is watching. We wanted to make sure that we also were able to capture an emotional response with these styles. 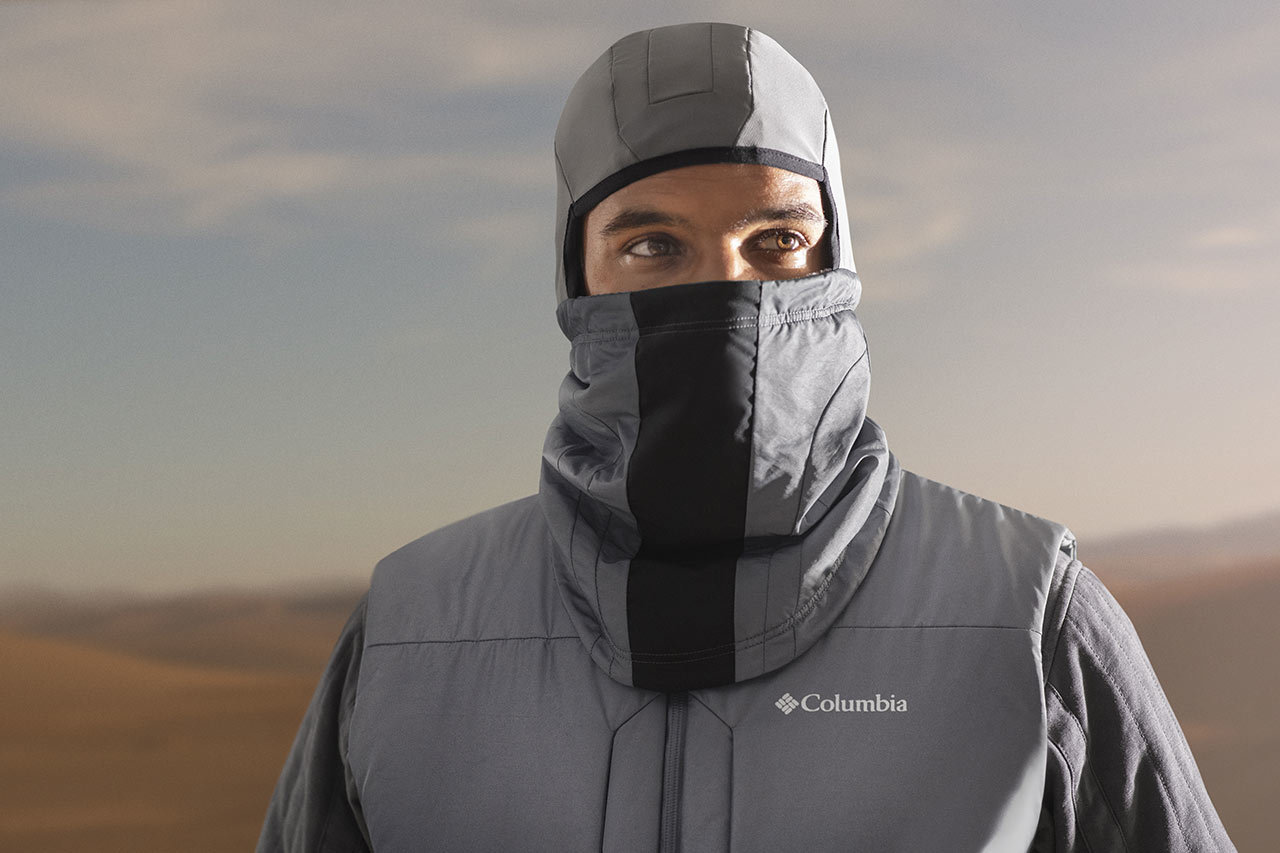 StarWars.com: The Mandalorian Helmet Gaiter does a nice job of making the iconic T-visor of Mando's helmet into something functional for outerwear. How tricky was that?

Phil Padilla: The team designed the Helmet Gaiter simultaneously with the Interchange Hybrid Jacket, so we could sync the fabrications for a consistent look and feel. The trickiest part of the Helmet Gaiter design/development process was figuring out the correct fit and construction on the upper head piece. Once that was dialed in, we were able to rely on the iconic details and lines of Mando’s helmet, and simply translate those onto the gaiter and let them speak for themselves. 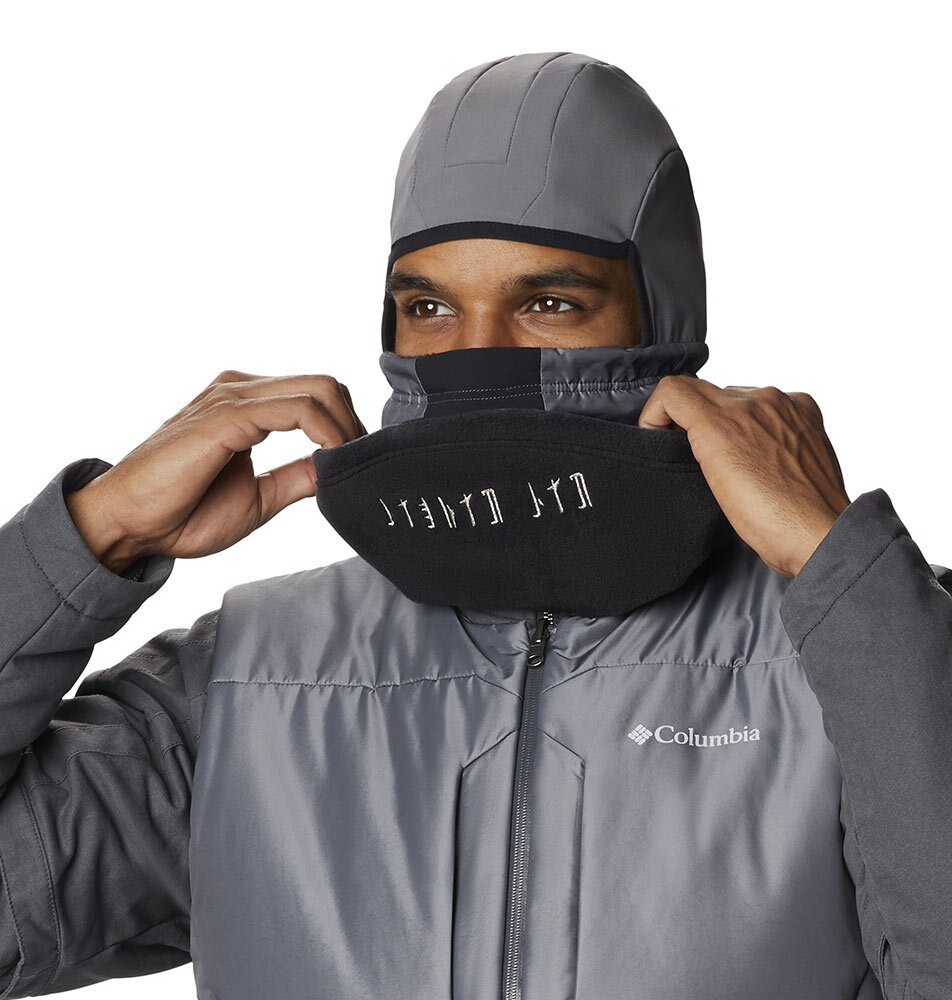 Leigh Roundy: Also making sure the T-visor proportions were spot on was so important. Making sure nothing was too wide, that the angles were noticeable enough when being worn up around the face. It was another exercise of nuance.

Phil Padilla: As we were brainstorming on the Helmet Gaiter’s design, I noticed that the lining of our Omni-Heat 3D technology is reminiscent of Mando’s helmet. This is one of our reflective linings that we developed a few years ago and actually used inside the Interchange Hybrid Jacket, but I’d never noticed that it looks like hundreds of Mandalorian helmets. It was an amazing moment! And now I think about the Mandalorian every time I see this reflective lining. 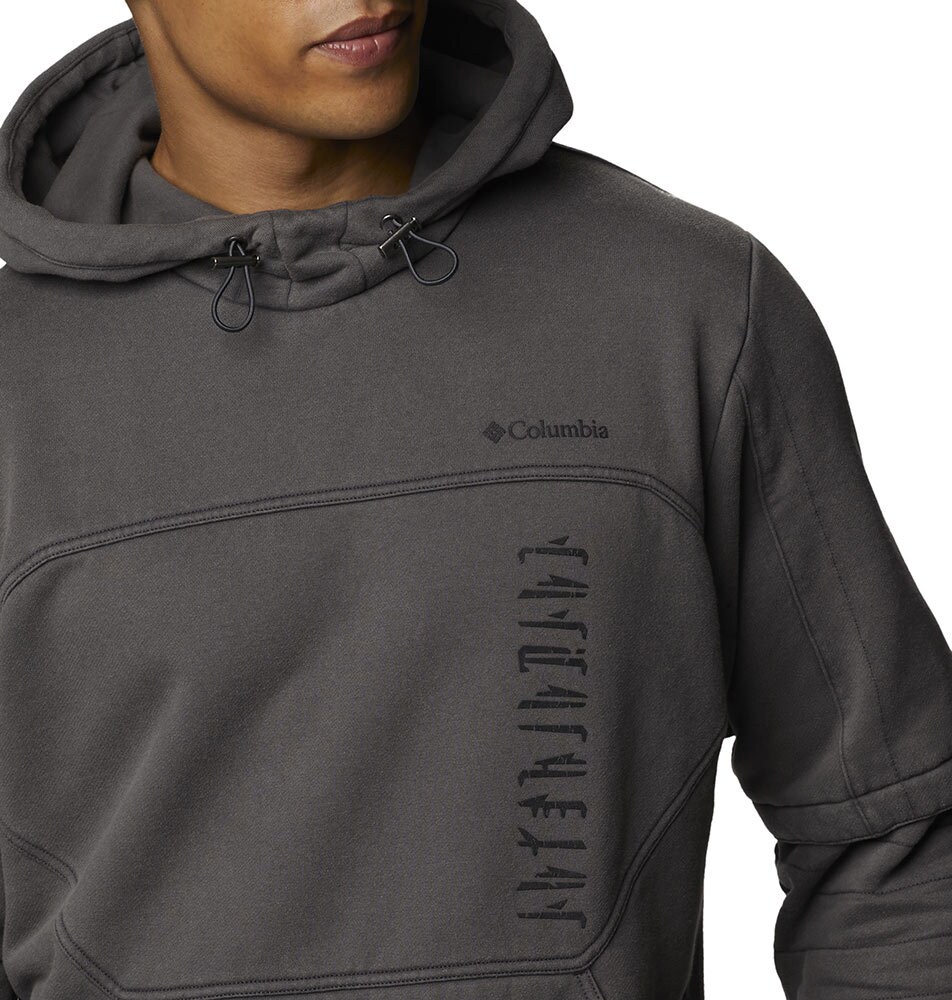 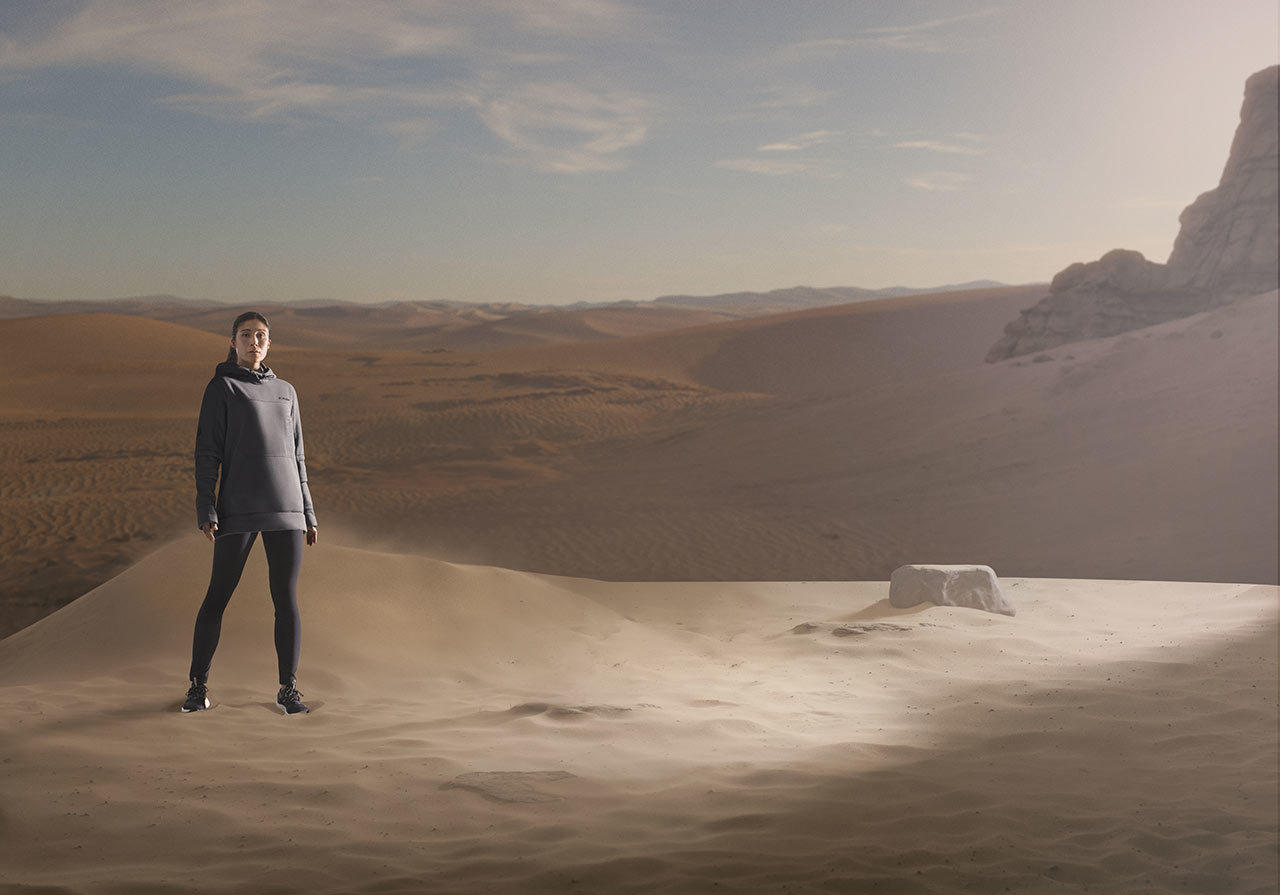 StarWars.com: There's also the special edition The Mandalorian Heavyweight Hoodie, also based on Mando's armor. What challenges did you face here, in terms of adapting the character's armor into fashion, that might not have been present with your jacket?

Leigh Roundy: The challenge was to find the balance between overt character read and the kind of nuance that would make it extremely wearable. Incorporating the layered look of the sleeve into a flange construction, bringing in the mudhorn iconography on the sleeve and adding a wash that gave almost a sand-blasted look were some features we felt were important to include in this piece to evoke a sense of the character. 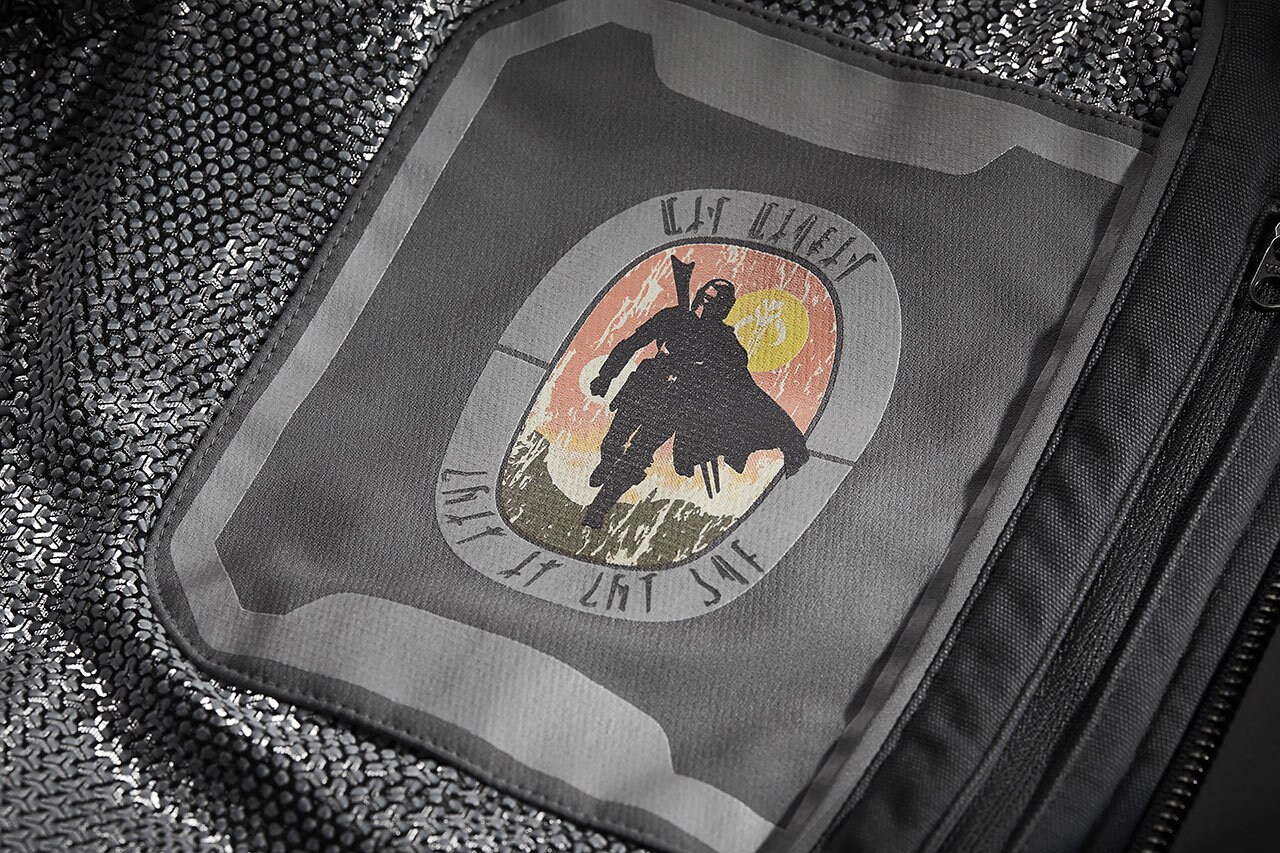 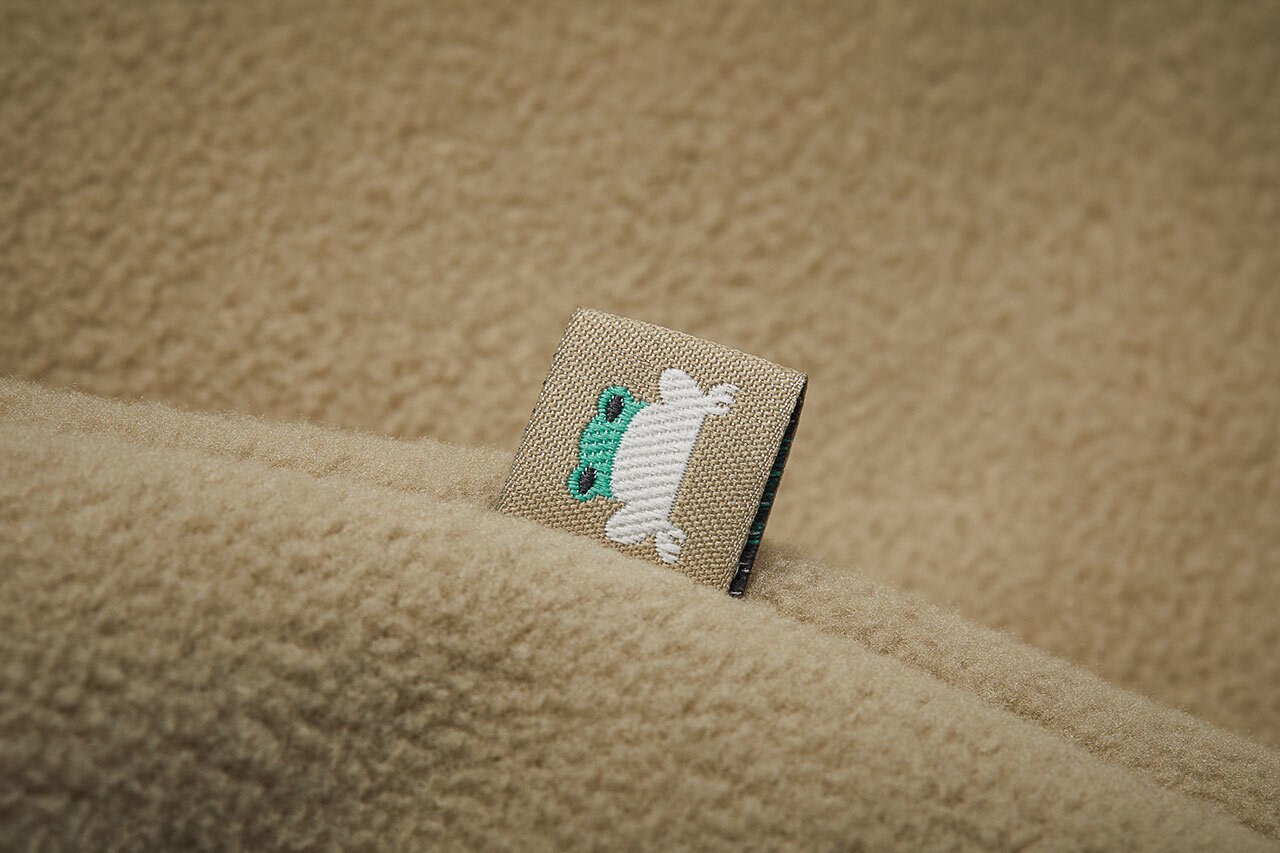 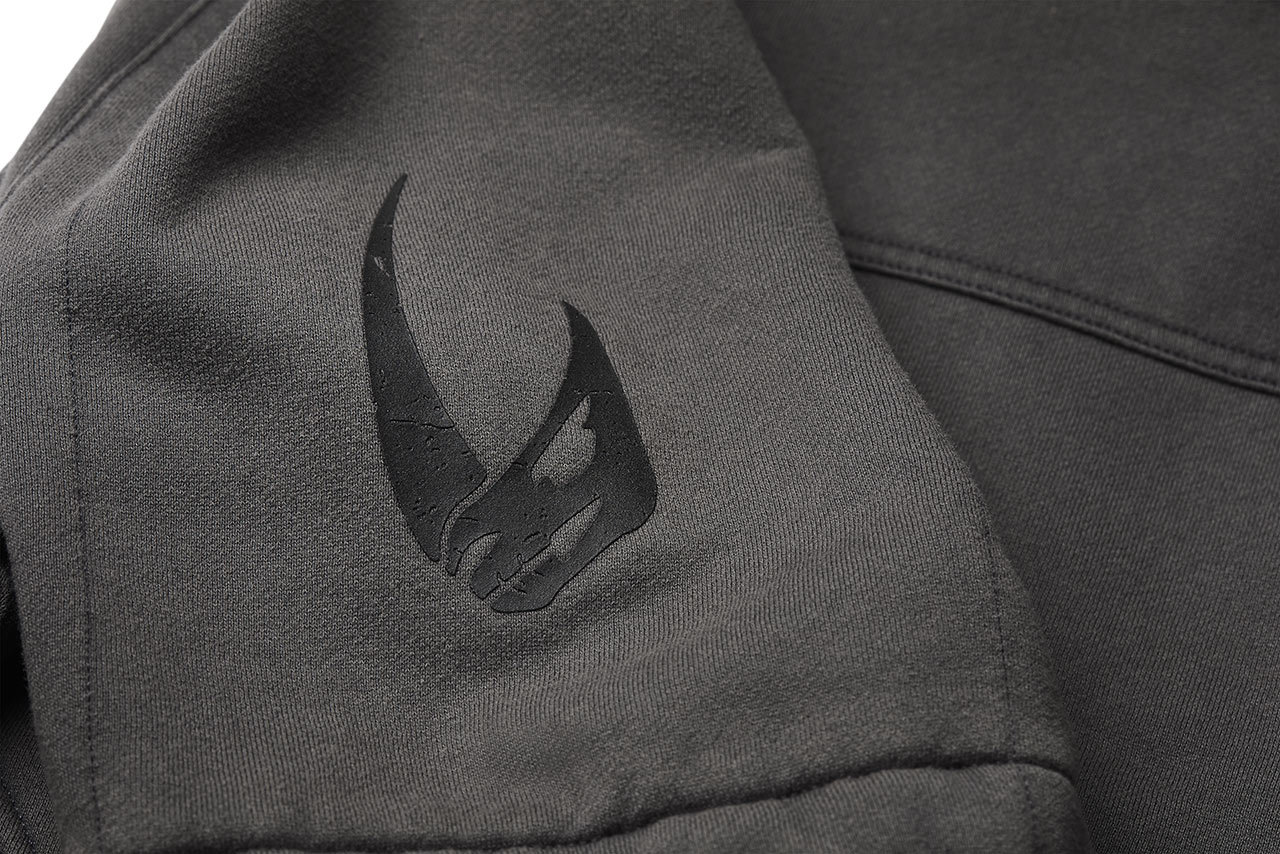 StarWars.com: Finally, a Columbia tradition is planting Easter eggs in its Star Wars products. Can you give us a tease of what fans might find?

Phil Padilla: Fans will find an assortment of considered and curated Easter eggs within the products, ranging from simple iconography and symbols to coded Mando’a messages.

Leigh Roundy: We wanted to bring in character-specific nods for the fans to discover…some require a bit of detective work to translate the meaning and others are meant to simply bring a smile to people’s faces. We had so much fun thinking about these secret messages!

Columbia's The Mandalorian-themed collection goes on sale December 4 at 12:01 am ET on columbia.com/StarWars and in select Columbia stores.