What Frightens a Sith Lord? Are You Scared, Darth Vader? Dares to Ask

Writer and artist Adam Rex on his spooky and fun new book.

There are a lot of scary things in Star Wars -- from surprise mynock jump-scares to realizing that the most terrifying person in the galaxy is also your dad. And most people would probably give the award for Most Terrifying Person in the Galaxy to the Emperor’s right-hand man, the Dark Lord of the Sith, Darth Vader. He’s fearsome in that tall, black armor, scary with that breathing, and frightening with his “sorcerer’s ways” -- the power of the dark side of the Force. So what could frighten one of the biggest bad guys? Writer and illustrator Adam Rex tackles that tough question in Are You Scared, Darth Vader?, an enchanting new book from Disney-Lucasfilm Press, out today. Rex has been delighting audiences with his artwork and stories for years, and now he has brought his talent to the galaxy far, far away. Via email, he has shared his take on Darth Vader, and the nature of fear, for StarWars.com.

StarWars.com: Are You Scared, Darth Vader? tells a unique story about one of the most feared villains in popular culture. What makes Darth Vader stand out as a bad guy?

Adam Rex: It’s a great question, isn’t it? Because a lot of people would like to bottle that lightning. Maybe it’s my bias as an artist, but I think to a great degree it comes down to really good character design, and to the decision to wait until the third movie before giving audiences more than a glimpse inside the armor. We didn’t know who was in there, so to some extent we had to fill the armor with our own issues; and then we couldn’t help but be afraid of him because he was fear itself.

StarWars.com: So what is Darth Vader scared of?

StarWars.com: Can you give us a hint? 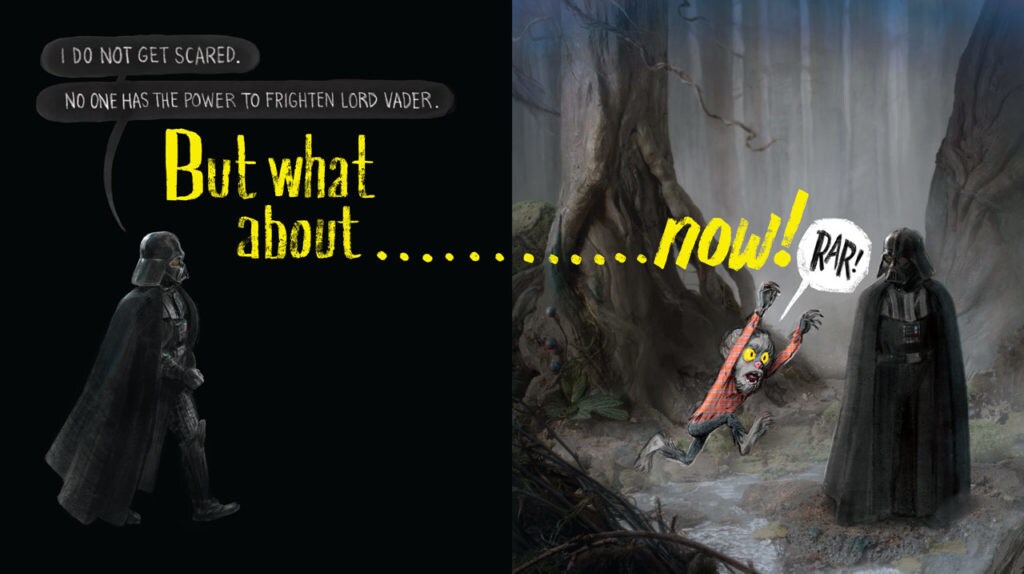 StarWars.com: How did you develop the artwork for the book?

Adam Rex: So the artwork is a combination of model-making, photography, and drawing and painting.

Part of my fandom for Star Wars as a kid growing up in the '70s and '80s was that I loved the rare looks we got behind the scenes -- the Making Of featurettes that were a lot harder to come by back then. I loved the model-making and shots of SFX artists manipulating, say, a 1/600 scale Hoth diorama. So for this book I decided to build my own swamp -- out of paper clay, foam, wire, gunk, glue, paint, etc. Then photographed it and digitally inserted drawings of Vader and the other characters.

StarWars.com: More than just portraying Darth Vader as someone without many of the fears that we might have, you also show the more tragic side of him -- what makes this Lord of the Sith a bit more sympathetic to the audience?

Adam Rex: You could argue we weren’t really meant to have any empathy for him until at least the end of Empire Strikes Back, but I think audiences have felt something for him all along. I don’t know -- it’s hard to remember. But again, I think it’s the way the mask and the armor let us fill in some of the mystery ourselves. He wasn’t just a bad guy, he was our bad guy.

StarWars.com: A lot of your books, like Frankenstein Makes a Sandwich and The True Meaning of Smekday, take scary concepts like monsters or alien invasions and put a humorous slant on them for children? How do humor and horror interact?

Adam Rex: Well, they’re both largely about thwarted expectations. Something happens that contradicts the way things are “supposed to be,” and people who study this stuff tell you if that contradiction seems subsequently safe, you get humor. Otherwise, you get horror. I think that’s a big oversimplification, but I also think it sounded kind of smart, and I want your readers to think I’m smart.

StarWars.com: Yoda once said, “Fear is the path to the dark side.” What do you think makes Star Wars a fertile ground for monsters and examining fear? What lessons does it have to offer?

Adam Rex: One thing I like about Star Wars, as a kid and also now, is the way man and monster is often subverted. Not always -- there are rancors and Sarlaac pits -- but that bigfoot over there? He’s the smuggler’s best friend and copilot. That fish-man? He’s an admiral. The real monsters are an empire of humans who are fascist about their humanity. So I think Star Wars encourages kids to understand that danger doesn’t always come in the most obvious package.

StarWars.com: How did you become an illustrator and writer? What insights do you have for aspiring storytellers?

Adam Rex: I kind of believe that I was always an illustrator. That’s how everyone starts out -- all kids draw, and they use their drawings to tell stories. And then most kids stop as they grow older, and I didn’t. But I know what you’re asking. I got my start as an illustrator painting pictures for role-playing and collectible card games -- work I got largely by showing my work around San Diego Comic-Con in the ‘90s.

And I can’t even tell you how I became a writer. I wrote a lot and read a lot more, and I got really, really lucky.

StarWars.com: If you can’t tell me what Darth Vader is scared of, can you share what you’re scared of -- now, and when you were a kid? Hairy spiders? Clown-snakes? A future without sugary cereals?

Adam Rex: Here, I’ll give you a rundown of all my biggest fears from age five onward: swim lessons, the dark, page 36 of a book my parents had about toads, organized sports, the little girls from The Shining, girls in general, failure, the inevitability of death, being a bad father, my home renovation project, and not coming up with a good capper for this interview.

Are You Scared, Darth Vader? is available now.