Coca-Cola comes to the Star Wars galaxy in style, and much more. 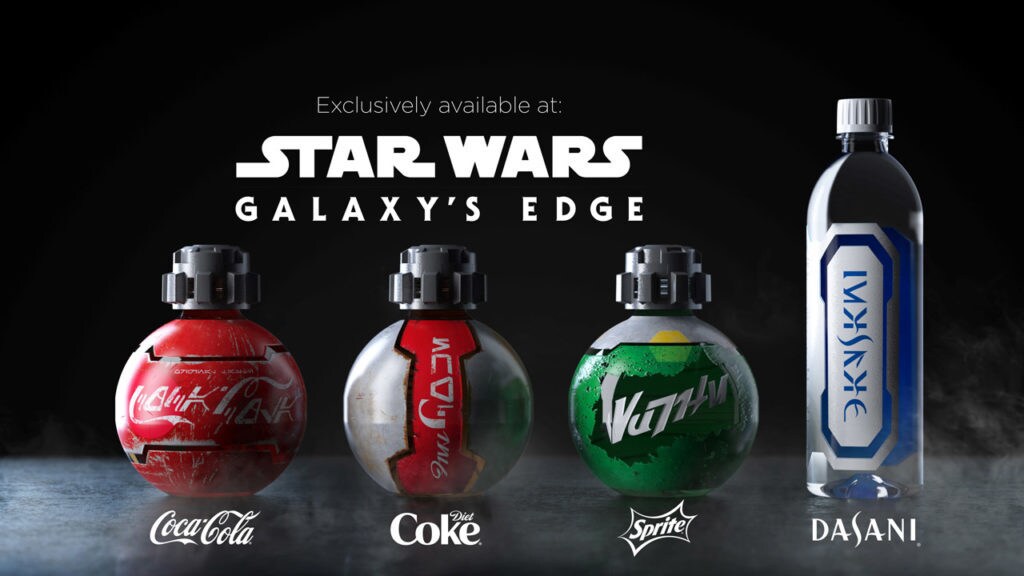 1. You Can’t Beat the Real Thing…at Star Wars: Galaxy’s Edge. You’ll be able to enjoy a Coca-Cola at Star Wars: Galaxy’s Edge -- but one that’s truly in-world. The Coca-Cola Company has collaborated with Walt Disney Imagineering and Lucasfilm to create extremely cool, new bottles for Coca-Cola and other beverages that look like they’d be right at home on Batuu, or maybe in Lando’s fridge. “We wanted something that almost appeared like it was pulled off of a ship or left behind,” said Matt Cooper of The Coca-Cola Company, “and was repurposed as something that you could consume some of your favorite drinks in.”

“We translate the Coca-Cola name in more than 100 languages,” added Brad Spickert of The Coca-Cola Company, “but now, being able to share them for the first time in Aurebesh with this crowd at Celebration truly takes my breath away.” Attendees of the panel went home with a free Aurebesh Coca-Cola T-shirt, inspiring understandable jealousy from host Josh Gad.

2. You may hear and feel the presence of Yoda. And he will be voiced by Frank Oz, Chris Beatty confirmed. Happy to hear this, the crowd was.

3. Figrin D’an is making a comeback. The cantina band from Star Wars: A New Hope has a new song in Star Wars: Galaxy’s Edge; it was played for the crowd, and sounds just right if you know their past work. But the music of Batuu is varied. Another new song blending techno and hip-hop elements was played, featuring droid sound effects and an inventive, other-worldly arrangement.

4. Paul Reubens returns as R3X. It was confirmed that the actor is returning to play the fan-favorite droid from Star Tours, who will now be DJing in Oga’s cantina. “No one was more excited than Paul. He was great to work with,” said Margaret Kerrison, noting that Reubens brought a lot of inspiration and even wrote new lines. “You will be thoroughly entertained.”

5. She won’t get a scratch…or will she? The Millennium Falcon: Smugglers Run attraction promises to put you in control of the fastest hunk of junk in the galaxy. But depending on your flight crew’s performance, the Falcon could be worse for wear once your mission is over. “It’s going to look different depending on how you fly,” said Asa Kalama. The iconic hallway of ship will look beautiful and pristine if you did well; if you crashed and took too much fire from TIEs, lights will be broken, you’ll hear sparks and comm chatter about your poor effort. “It’s important to bring the ship back in good working order,” Kalama said. “Hondo’s a phenomenal boss, but he doesn’t take too kindly to those bringing his ship back in rough shape.”

6. You can enter a Twitter sweepstakes for a chance to win a vacation to visit Star Wars: Galaxy’s Edge at Disneyland Resort. As announced at the panel, Lucasfilm and parent company Disney, and the global K-12 nonprofit organization FIRST (For Inspiration and Recognition of Science and Technology) are teaming up to inspire the next generation of heroes and innovators. This sweepstakes is meant to help spread awareness of FIRST -- go here for full details!

For more on Star Wars: Galaxy’s Edge, check out StarWars.com’s in-depth features on the making of the land, its food and beverages, and the shops and characters you’ll encounter.

NO PURCHASE NECESSARY. Enter Sweepstakes between 4/13/19 at 8:00 AM PDT and 4/22/19 at 11:59 PM PDT. Open to legal residents of the 50 U.S. & D.C., Puerto Rico and Canada (excluding Quebec), who are 13+ at time of entry. Limit 1 entry per person. Visit https://starwars.com/FFCsweeps for Official Rules including details on how to enter, eligibility requirements, odds of winning, prize descriptions and limitations. Void in Quebec and where prohibited.  Sponsor: Lucasfilm Ltd. LLC, 1110 Gorgas Ave, San Francisco, CA 94129.