Why Leia Is Awesome 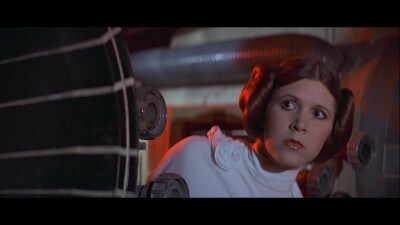 For my next blog post, blog editor Matt Martin suggested I write about why Princess Leia is an inspirational character. Some of you already know that this was not much of a favor to ask -- I could talk about Leia every week. I’m not going to, I promise. But I am today!

Princess Leia is rightly regarded as a female role model, yet I still feel like there are certain displays of heroism in the original Star Wars trilogy for which she doesn’t get enough credit. When talking about Leia in general circles, it seems like two things come up over and over again: her sassy comebacks and the metal bikini. I enjoy both of those things as well, but she’s so much more than that, and there are certain excellent, perhaps underappreciated moments in the films that really make Leia stand out as a hero. There’s a reason that she became a symbol of inspiration and accomplishment to young girls of my generation, and it wasn’t for her clothing. (Although, let’s face it, it was partially for her hair.)

So rather than write generally about why Leia is an inspirational character, I thought I would focus in on a few specific incidents, and how they showcase some of her more admirable qualities.

Her strength is apparent in A New Hope, when she is tortured by a Sith Lord to find out the location of the secret Rebel base -- and tells him nothing. Vader even acknowledges the surprising depth of her resistance. Then, when she’s brought before Grand Moff Tarkin and threatened with the destruction of her entire planet if she doesn’t give up the location of the secret base once and for all, she stands there, with this merciless man before her and the man who tortured her gripping her shoulder behind her, and lies. She lies. It’s an incredible moment of steel will on her part. Did I mention that she’s only 19 at the time? Take a moment to think about what you accomplished at age 19. For me it was mostly drinking my weight in coffee at college.

Her empathy is on display after our heroes have escaped the Death Star, when Leia takes the time to console Luke -- who she just met a few hours ago, remember -- about the death of Obi-Wan. That’s right, she takes the time to console a guy she’s just met on the death of a man who that guy just met, when her entire planet has just been disintegrated (and she was recently tortured and about to be put to death. I’m just saying.). She may have a sassy mouth on her, but she also has a big heart.

Her loyalty is shown in The Empire Strikes Back, during the battle of Hoth, when even though Echo Base is falling down around them and Imperial forces are knocking at the door, Leia is still at the command center, coordinating combat efforts while she ducks falling chunks of ice. She’s on the front lines just like everybody else. And even when Han finally manages to drag her off (and I love that he knows that’s where she’ll be), she stops to tell the person working with her to get to the transport, too. She’ll never ask anyone to do something she wouldn’t do herself.

Her bravery is crystal clear in Return of the Jedi, in a scene where we never even see her face -- which makes it easy to gloss over just how stone cold fierce she is here. Petite Princess Leia, maybe 100 pounds soaking wet, strolls into Jabba’s palace with Chewie’s chains in one hand and a thermal detonator in the other. And she stands there, surrounded by some of the galaxy’s worst examples of scum and villainy, and threatens to blow up the whole place. Is she sweating under that Boushh helmet? We’ll never know. But she projects a demeanor so cool and collected that even Boba Fett is grudgingly impressed.

And her cunning is shown in a small scene in Jedi that I love: when the Ewoks launch their attack on the Endor moon, and in the ensuing chaos Leia is the one who thinks to take out the guy on top of the AT-ST so it can’t be used against them. And does it in one shot, no less. She is all about taking care of business, you guys. (This quality is of course also shown when she blasts the Stormtroopers who have cornered her and Han outside the bunker, but I have a real appreciation for the lesser-discussed moment.)

There are of course multiple other examples of Leia’s general awesomeness, but these are a few of my favorite instances that maybe are not fully appreciated as much as they should be. Please share your own favorite Leia moments in the comments!