Who Will Survive Star Wars: The High Republic?

When the light of the Jedi is extinguished in January, things will get dark.

"Who will survive?" Ever since the release of the teaser poster for the next wave of books and comics in Star Wars: The High Republic, this question has been weighing on fans of the new era. But in classic Star Wars fashion, there must be a balance. Like Han Solo cracking a joke with a smile just as things are looking bleak, levity and humor allow us a break from the tension.

Because, let's face it, Star Wars has a particular way of breaking our hearts. Ever since poor Greedo got fried, Obi-Wan disappeared, the rancor got crushed, and Yoda chose eternal sleep over Luke Skywalker’s incessant questions, I’ve known that no beloved character is safe. I thought The High Republic might be different. It’s a time of peace, after all, or at least it was. With the Jedi Order in its prime, surely my beloved new class of Padawans would be safe. Right? RIGHT?!?

Things are about to go sideways for the Jedi, the Republic, and everybody in between. But before I must face the truth that is these stories, some thoughts on that disaster poster art and our brave Jedi of the High Republic.

Editor’s note: We honestly don’t know the answer to “Who will survive?”, but we can’t wait to find out when the next wave of books and comics arrives starting January 4, 2022. 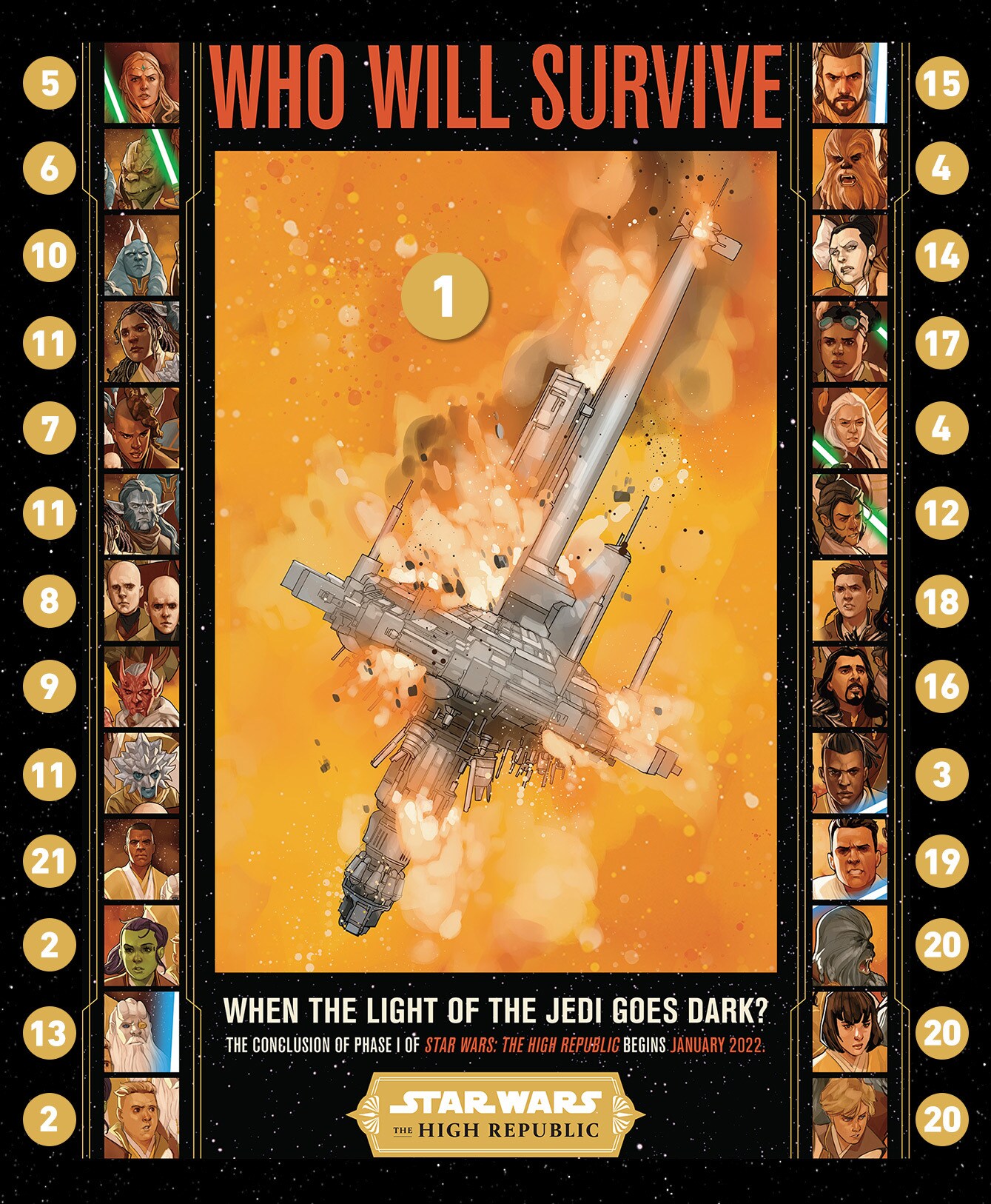 1. The Starlight Beacon. If K-2SO were here, he’d tell you the probability that the Starlight Beacon itself will be destroyed is high. It’s very high. I mean, it appears to literally be on fire here. But then again, maybe someone just let Vernestra drive.

2. Vernestra Rwoh and Imri Cantaros. Vernestra is a prodigy, having attained the rank of Jedi Knight at the age of 15. And she survived a glorified babysitting gig watching over the precocious Avon Starros. She’ll be fine, as long as no one calls her Vern. And since Imri has already lost a master to tragedy, here’s hoping he doesn’t endure more bad luck.

3. Bell Zettifar. Speaking of Padawans who have been through the ringer, Bell has emerged on the other side of losing Loden Greatstorm without spiraling into full Anakin Skywalker revenge mode, so I hope he’s also spared. And doesn’t encounter a room full of younglings when he’s in a bad mood. But I couldn’t help but notice that Ember is absent. I’m going to go ahead and assume that means Ember is fine. SHE’S FINE. Right?

5. Avar Kriss. Avar often carries the weight of the galaxy on her shoulders. If she lives, I won’t be surprised if she decides to retire to Dagobah or some other slimy mudhole so she never has to deal with Republic bureaucracy again. She’s earned it!

6. Sskeer. You know what they say. If the Drengir don’t get you, the burning space station will. Can he still regenerate from a pile of ash? Asking for a friend.

7. Keeve Trennis. We’ve grown fond of Keeve. Who among us didn’t want to reach through the page and give her a big hug when she burst into tears at the end of Marvel’s The High Republic #1. It’s been a journey! And considering her master might be a pile of ashes trying to regrow a whole body now, here’s hoping the writers have gone easy on her.

8. Terec and Ceret. The bond twins are a package deal. Whatever happens to one is sure to ripple and impact the other.

9. Estala Maru. Estala left his space tea on that burning space station, and whoever interrupted his morning cuppa is going to pay. Though I wouldn’t be surprised if he were the type to go down with the ship, desperately beaming his many files onto off site storage. He should have started the backup years ago!

10. Torban “Buckets of Blood” Buck! Like Avar, I’m hoping Buckets of Blood makes the cut and lives on to retire and live out his dreams as a celebrity judge on the Great Galactic Baking Show, streaming in a galaxy near you sometime long ago. New nickname idea: Buckets of Baked Goods.

11. Lula Talisola, Farzala Tarabal, and Qort. The power of friendship will protect this holy trio. May they celebrate their victory with a medal ceremony a la the end of Star Wars: A New Hope. Except the medals are all made of space chocolate. And Qort gets a new mask!

12. Kantam Sy. They're Yoda’s former Padawan. Nothing bad EVER happens to people who study under Yoda. Right, Doo?

13. Porter Engle. The Blade of Bardotta won’t be easily silenced. But you can bet that he’d rather be cooking up a nine-egg stew in the mess than dealing with whatever Nihil shenanigans are engulfing the galaxy this time. So uncivilized.

14. Orla Jareni. Pretty sure Orla could kill with just a glare. Odds are she’ll be fine as long as she doesn’t get caught on a desert planet without any sunscreen.

15. Stellan Gios. With a mane of hair that makes me think “Why, he must be related to Poe Dameron,” surely nothing disastrous can befall this Jedi Councilman.

16. Cohmac Vitus. Another member of the “Orphaned Padawans” club, poor Cohmac is still carrying around emotional baggage from the Eiram-E’ronoh crisis. Here’s hoping he avoids the whole Beacon fiasco while on a nice meditation retreat.

17. Ram Jomaram. Can he fix it? Yes, he can. Especially if he’s got a few Bonbraks on hand to assist. Although, having recently learned that Ram is feeling completely devoid of emotion…he may just be one busted hyperdrive away from a total dark side meltdown.

18. Reath Silas. You should have stayed in your reading nook where it was safe, Reath!

19. Elzar Mann. More like Elzar Ladies’ Man, am I right? Of all the Jedi on the list, he’s my number 1 pick for “Jedi who have had enough of this Nihil noise and go full Maul revenge mode.” Spiderlegs Mann has a certain ring to it.

20. Lily Tora-Asi, Padawan Keerin Fionn, and Master Arkoff. With her dual lightsabers and a Wookiee Jedi Master at her side, Lily is a force to be reckoned with. Here’s hoping this trio makes an appearance outside the manga series.

21. Emerick Caphtor. I wish we had Emerick here to solve this mystery.

Special shoutout: Master Yoda. The Jedi Master has been a welcome familiar face in the new era and we know he’s going to be OK. That’s probably why he’s not on the poster. As for the rest of them? Let’s just all agree to hold onto hope.