With all of its Star Wars-related projects, ILMxLAB has changed the way we experience a galaxy far, far away. And that's the key word, really: experience. Because what ILMxLAB -- Lucasfilm's immersive entertainment division, formed in 2015 -- has done is to bring us inside Star Wars. ILMxLAB has broken the wall between passive viewer and character, between spectator and participant. The evolution of their work has been amazing to witness. In the early virtual reality experiment Trials on Tatooine, we got to wield a lightsaber and deflect stormtrooper blasts. In Secrets of the Empire, a collaboration with The VOID first released at the end of last year, we took on the role of rebel-turned-undercover stormtrooper, blaster in actual hand, literally making our way through an Imperial complex on Mustafar. (Complete with heat from its burning lava.) This has all led here -- to today's reveal at Oculus Connect 5 in San Jose, California, of Vader Immortal: A Star Wars VR Series - Episode I, an experience coming in 2019 to the newly-announced Oculus Quest.


Vader Immortal, written and executive produced by David S. Goyer (The Dark Knight, Secrets of the Empire), will be a three-part series set between Star Wars: Revenge of the Sith and A New Hope. It connects to Secrets of the Empire (though we don't yet know how), and sends fans to the iconic Sith Lord's castle on the lava-world of Mustafar first seen in Rogue One: A Star Wars Story. As shown in the teaser trailer above, which also debuted today, we'll encounter Vader himself and wield a lightsaber. No other details have been disclosed, except that it looks to be the next step in Star Wars VR.

"The very initial conversations around this project started three years ago, around the launch of ILMxLAB," Mohen Leo, director of immersive content at ILMxLAB, tells StarWars.com. "Lucasfilm was in production on Rogue One. In the film, the audience gets a glimpse of Darth Vader’s castle on Mustafar, which we knew would be intriguing to a lot of fans. This was also around the time that some of the first really compelling content for the Oculus DK2, the developer kit that preceded the Oculus Rift, came out. We recognized that VR has a unique ability to transport people to a fictional place and let them explore it. So, we thought, 'Wouldn’t it be cool to let the audience visit and explore Vader’s castle, and have the opportunity to learn some of his secrets?'”

For Goyer, an accomplished screenwriter who has also written for television and video games, the project was one he could not pass up. "I think it was about three years ago that Kiri [Hart of the Lucasfilm Story Group] called me up and said, 'Would you ever be interested in doing something in the VR space with Vader?'" he tells StarWars.com. "And I said, 'Yes!' She said, 'Do you want to hear anything else?' And I said, 'No!' No one prior to this had ever attempted anything like this in VR. And I was interested in moving into VR. But the idea that I could actually work with ILMxLAB and do something with Vader, that was the killer app for me."

The development of Vader Immortal, to hear Leo and Goyer tell it, has been a journey of discovery and experimentation. What can and should they do with this medium and with this hardware -- which is tetherless -- and how can they use them to present Star Wars in a new way? Conversely, what shouldn't they do? Finding the answers to these questions have made for a creative process that has challenged what's possible in Star Wars and VR.

"It's been a long, long process," Goyer says. "There aren't any established rules for what we're doing, and there were definitely some starts and stops. Even trying to figure out what it was and what the parameters were took us the better part of a year."

"VR is still a really young medium so, with every project, we experiment and learn," Leo says. "Trials on Tatooine allowed us to give the audience a first taste of Star Wars fantasy fulfillment: wield a lightsaber, meet Artoo, stand on Tatooine, and feel the power of the Millennium Falcon as it lands over your head. As a location-based experience, Secrets of the Empire really emphasized a sense of space and how you move through it. It also takes place on Mustafar, prior to the events of Vader Immortal, and it shows some narrative seeds of a storyline that connects the two experiences. With Vader Immortal, we really wanted to push connection to characters and narrative between multiple experiences. So you’re not just visiting an iconic place from a movie; you get to meet iconic characters like Darth Vader, face-to-face."

And for Goyer and all involved, it's been a rewarding learning experience.

"I knew I couldn't write it like a teleplay, I couldn't write it like a movie," he says. "I've been writing for screen a long time, so to a certain extent I can anticipate how people are going to react to a scene. But in VR, that completely throws everything out of the water. We would have a really emotional scene, for instance, but as we were play testing it, the environment was just so overwhelming because you're actually there, you just weren't listening to anything anyone was saying. And so fairly early on, the rest of the team and I realized we have to write and play test, write and play test. There was no way how to anticipate how you would respond unless you put on the goggles and experienced it, and that taught us a lot."

"We have an amazing team at ILMxLAB in San Francisco," adds Leo, "who worked in close collaboration with a team at Ninja Theory, an award-winning games company in the UK, Lucasfilm’s Advanced Development Group, Skywalker Sound, Epic Games, the support team at Oculus, and, of course, a screenwriter of David Goyer’s caliber. It is really a privilege to work on a project that brings together brilliant folks from so many different fields, and see what they can create together."

For the canon-uninitiated, one thing that's important to note is that Vader Immortal counts, and was hatched and developed with guidance from the Lucasfilm Story Group. It will be an official part of the overall saga, adding to what we know of Vader and his story, and of everyone and everything else that Vader Immortal touches.

"We came up with the concept, and then we had a conversation about where in the timeline it would fit," Goyer says. "Everyone felt very strongly that it's a legitimate Vader story and that it advances the ball in terms of who he is and what his goals are. We were also determined to make sure that it's a story you can only experience in VR. There aren't any other plans to port this into any other medium. We wanted to design it specifically for VR." 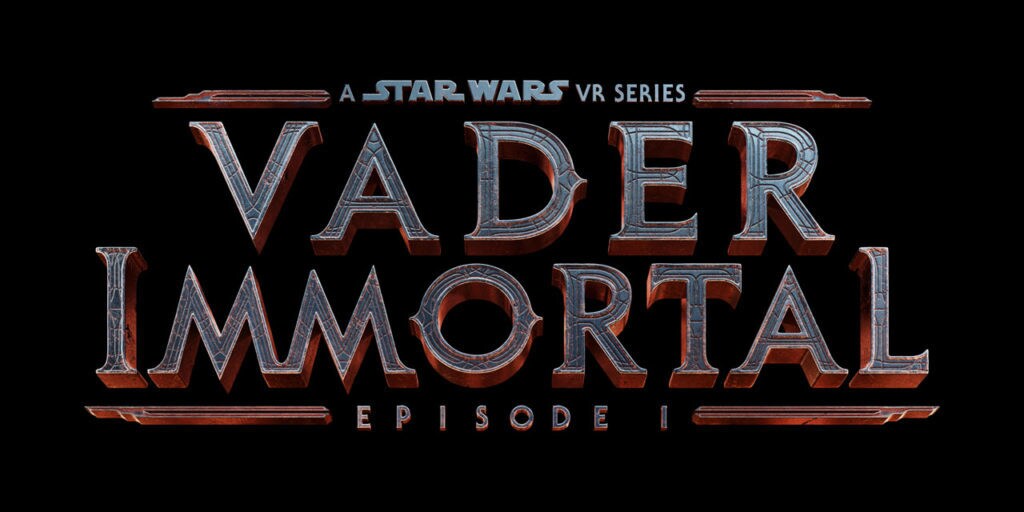 Indeed, the VR form is expressly unique, and the more immersive the experience, the more powerful. "VR just conveys an enormous amount of presence," Goyer says. "You really feel like you're there. Millions of people have had a fantasy of wanting to inhabit the Star Wars universe. And you get to inhabit it in a real way and interact with Vader for a significant period of time. But also, what's remarkable about VR, is it can convey emotions. It's a different way to experience Vader. Different from the movies, different from cartoons, so that's what's really exciting."

And...what's experiencing the Sith formerly known as Anakin Skywalker like in Vader Immortal?

"I can tell you that the first time we did tests with Vader approaching you -- it's just incredibly intimidating," Goyer says.

The Sith Lord, however, isn't the only element of Vader Immortal you'll get up close and personal with; his castle, too, plays a role. "You're going to be able to really explore that place and, by extension, learn a lot more about Vader," Goyer teases. "I think the goal, also, was that we might able to [witness] some other depths to his character that might be difficult to experience in other mediums."

Integral to all of this, of course, is the Oculus Quest. The headset, which is wireless, is what has made Vader Immortal possible. "Oculus has been a fantastic partner in this project," Leo says. "Both sides recognized early on the shared desire to explore the storytelling aspect of immersive entertainment. From the first time we tried the early prototypes of Oculus Quest, we were really excited. There is something really cool about the freedom of an untethered VR headset that allows you to really dive into the virtual content without some part of your brain worrying about getting tangled up in wires."

Now, we just have to wait for our date with a Sith Lord. And if you're excited, you're not alone.

"As someone who watched Episode IV opening day as an 11-year-old," Goyer says, "to actually write dialogue for Vader, and to be told by the Story Group that it actually sounded like Vader -- that was a personal thrill for me.