Studying Skywalkers: The Meaning of Weather in Star Wars

A sunny day can say a lot.

Studying Skywalkers is an exclusive column that investigates the characters, themes, and lessons of Star Wars from an educational, literary perspective. In this installment, StarWars.com looks at the role of weather in the saga.

One of my favorite features of the new Star Wars app is the weather option. By clicking on this feature, you are instantly transported to the world of Star Wars, where the story of your day is told. The weather will affect your mood and may help navigate the course of your emotions. This is also a great literary tool with some real history behind it.

From William Shakespeare to Edgar Allen Poe to Mark Twain, weather has long been a literary device which reinforces our understanding of characters and events during integral plot points. What the reader or viewer gleans from the weather often is a reflection of the inner conflict of the heroes and villains.

For example, the following lines from Act III, Scene 1 of Romeo and Juliet create an atmosphere of foreshadowing when the cousin of Romeo, Benvolio, explains, “I pray thee, good Mercutio, let’s retire:/The day is hot, the Capulets abroad/And, if we meet,we shall not scape a brawl;/For now, these hot days, is the mad blood stirring.” (III:1, 1-4). What Benvolio is essentially saying to Mercurio is, “Hey friend, let’s get out of here. It’s hot, and we are liable to be more irrational since the weather can affect our moods.”

Weather matters. Poe used it often to reflect the fall of the Usher household in the titular short story, and Twain used it to mirror Huckleberry Finn’s loneliness and melancholy in Adventures of Huckleberry Finn. Star Wars often offers this insight as well. Let’s look at a few of the examples the films have provided. 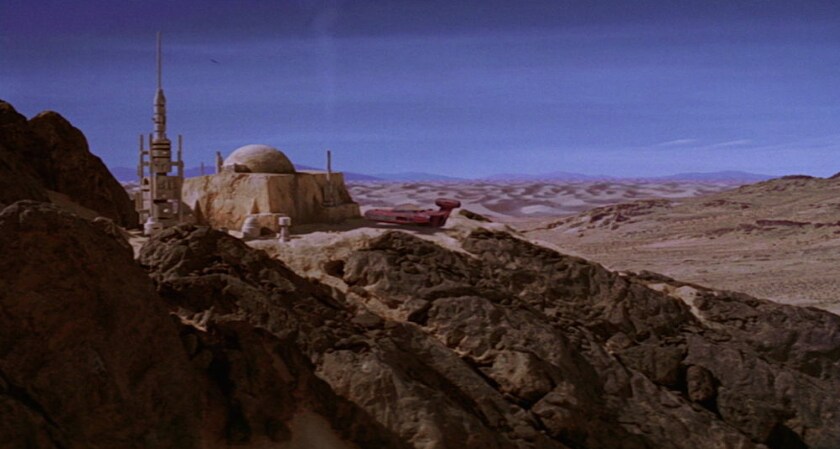 The first planet we ever saw in a Star Wars film features prominently in an analysis of weather, as the desert landscape of Tatooine reflects the desolation that Luke Skywalker feels in his life. He feels isolated, alone, and does not have optimism that life will flourish around him. The heat is also oppressive, much like the oppression he feels from Uncle Owen. 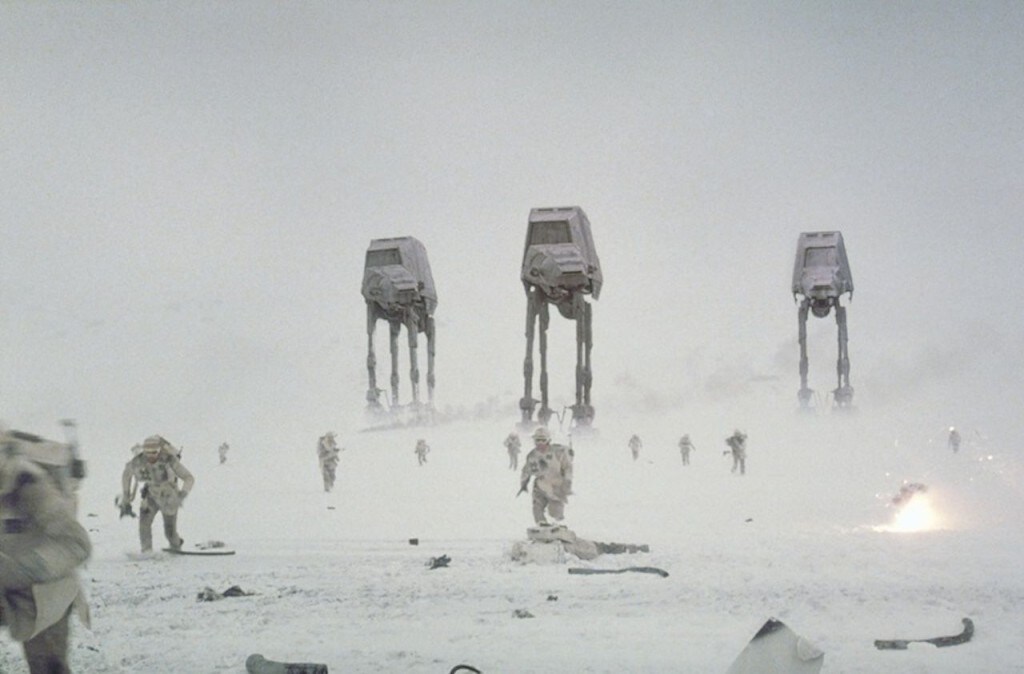 Conversely, the first planet we see in The Empire Strikes Back is a frigid one where snow and ice encompass the landscape. Here, we turn our attention to the burgeoning Rebellion; the Rebels seek to find some warmth in the galaxy, as well as some safety. However, the icy planet offers more desolation and danger. Many things on the planet can be perilous to the inhabitants -- such as Wampas -- and the weather itself can be lethal without shelter. The weather literally turns on the Rebels, much like the galaxy turned on the Jedi once the Empire took control. Since ice is essentially frozen water, and water symbolizes change, viewers know that nothing will change for the Alliance unless they thaw the icy heart of the Empire -- manifested here on Hoth. 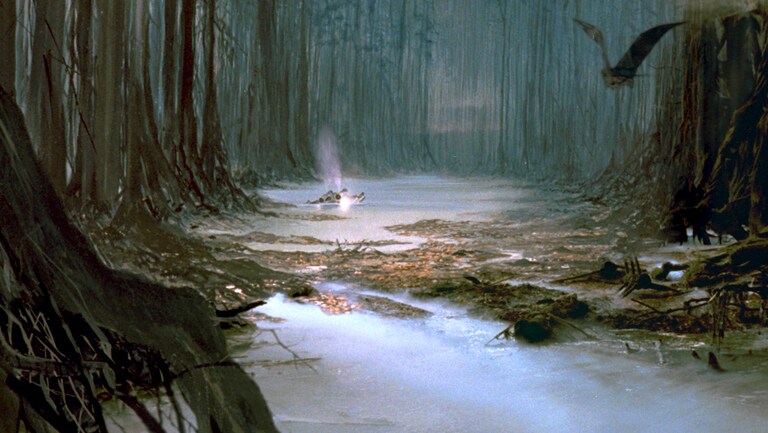 Dagobah is something of an enigma for audiences. This is where the spirit of Obi-Wan Kenobi instructs Luke to find the Jedi Master Yoda. Once Luke arrives, he discovers that the planet is foggy, murky and dense with heavy rainfall. This is also a clue as to what is going on inside the mind of the future Jedi. The fog represents Luke’s confusion. He can't see clearly as to what his path is, but hopes he is in the correct place. The rain is also inconsistent; there is some room for growth and change, but it depends on how much Luke is willing to let go of his conscious self. There also isn't any sunlight, which represents the lack of hope Luke feels if he does not leave the planet to rescue his friends. The metaphor here speaks volumes to the audience, as we paradoxically trust Yoda while understanding Luke’s confusion. 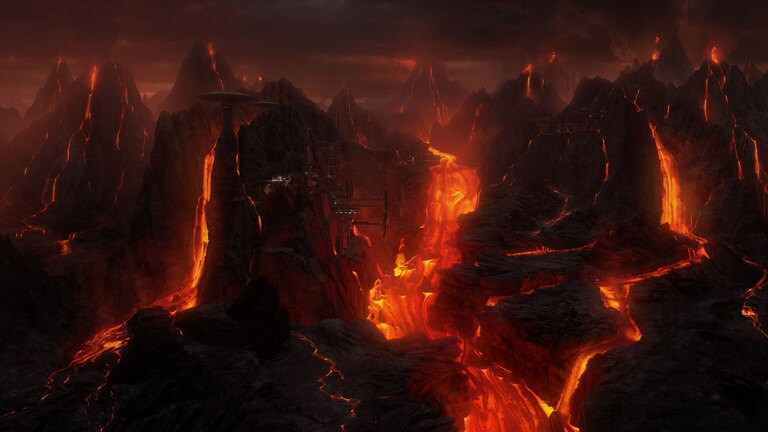 While Tatooine is hot, Mustafar is practically unlivable. The tiny planet in the Outer Rim has lava pits and rivers of fire, which are deadly in their existence unless properly navigated. At times it appears to rain fire, which is a fascinating twist on the metaphor of water and baptism. This planet serves as the climactic battle between Obi-Wan Kenobi and Anakin Skywalker, and the cascading fire from above shows us the cataclysmic changes happening not only to the two friends, but also represents how the presence of the Sith has turned the natural order of things upside down.

There are many more examples of weather that help represent the mood, atmosphere, and conflict of the heroes and villains in the Star Wars saga. Like a misfire on the Death Star’s thermal exhaust port, we’ve only scratched the surface of how weather is a representation of more significant moments that communicate to the audience. What examples can you think of, and how do they communicate the gravitas that is present on screen? Leave a comment below and share your thoughts!

Dan Zehr is a high school English teacher with an MS in Teaching and Learning, and runs Coffee With Kenobi (with co-host Cory Clubb), a Star Wars Podcast that analyzes the saga through critical thinking, analysis, interviews, and discussion. He is also a  member of the Rogues (as Blue Leader), a network of teachers that incorporate Star Wars in the Classroom.

"We Could Start on the Ice Planet": Learn How Hoth Came to Be in the Star Wars: The Empire Strikes Back 40th Anniversary Special - Exclusive Excerpt

Trim the Tree with Galactic Garland