The Galaxy in Comics: Star Wars #57 Brings Humor and Mystery

Plus, an instant classic Han and Leia moment.

The Galaxy in Comics is a deep dive into the events and themes of one recent Star Wars comic. In this installment, StarWars.com looks at Star Wars #57.

In Star Wars #57, Han Solo chops wood while shirtless in exchange for beer. (I can honestly say that’s a sentence I never expected to write.)

Shirtless Han Solo posing with an axe to the surprise of Princess Leia aside, there’s plenty more to actually talk about in regards to Star Wars #57, even if Han is what garnered the most reaction from fans. While “The Escape” is set up to be quieter than those cataclysmic events of “Hope Dies,” there’s still plenty afoot. Han, Luke, Leia, Artoo, and half of Threepio are separated from what’s left of the rebel fleet, without the Millennium Falcon to get them out of dodge. Instead, they have to rely on Sana Starros to help them make their way back home. To avoid being caught by an Imperial patrol, Sana sent the rebels down to Hubin in an escape pod, promising to return for them later. They now find themselves the guests of the mysterious Thane Markona, who’s seemingly happy to offer his hospitality. One problem: Hubin is an isolationist planet and keeps entirely to itself, with the only outside contact being via a trader ship that comes by once every six months. (And they just came by a month ago, so if Sana doesn’t come back…) The Rebellion’s going to have to do without our heroes for awhile. There’s clearly more to this Markona fellow than meets the eye (including the arm knives) and he makes no secret of it, even though he does keep the specifics of exactly why and how he came to be in control of Hubin quiet. Given that his parents and wife are buried on the planet, it seems probable he’s lived there for awhile but the “services rendered” remain nebulous. He’s also intuitive enough to realize that these sudden, strange visitors aren’t there entirely by choice, and even insists upon sticking with first names only so he won’t be able to divulge anything he doesn’t know if pressed. This is a man who is wise to the ways of the galaxy even if he’s removed himself from it (for as-of-yet-unknown reasons). His daughter Tula refers to everyone as being a part of “Clan Markona” and says their community of fighters is more than blood. Luke’s clearly interested into digging deeper into the mystery surrounding Clan Markona and with all the hints Markona’s been dropping, it’s certain to be interesting. While the Empire isn’t seen on page in this issue, its presence is still felt. Whereas we’re used to viewing the Empire through the lens of the Rebel Alliance, this is a more complicated situation. During his conversations with Luke, Markona mentions how it’s not entirely clear when the Republic ended and the Empire began -- and he’s got a point. There is Empire Day, of course, an occasion marked throughout the Empire (whether some worlds want to or not), but the day something is celebrated isn’t always its commencement in actuality. It took almost 20 years for Emperor Palpatine to officially dissolve the Imperial Senate, wiping away any last pretense at democracy. Even the clones were very slowly (although not entirely) phased out for recruited stormtroopers. For many people within the Empire, the change was likely so gradual it was hardly noticeable until they looked back a decade later and realized how much had changed. As Jyn says in Rogue One, “it’s not a problem if you don’t look up,” and plenty of people in the Empire are just fine with keeping their gazes down, as long as they aren’t the ones paying the heaviest price. Clan Markona’s effectively doing that now by paying the Empire a tithe so they’ll be left alone. They might not like what they see once they open their eyes to the larger galaxy again. On a lighter note, the cover for this issue is another one of the true standouts for the series. Jamal Campbell’s work is both humorous and classic while still relating to the issue’s content. Many people around the world are familiar with Grant Wood’s American Gothic, which depicts a stern looking farmer with pitchfork in hand, and a woman standing beside him. Campbell’s work parodies Wood’s with Han and Leia. It’s a nod toward the issue’s more agricultural setting without being a direct depiction. Between this cover and the events within it, Star Wars #57 reminds us that humor is always on the table when it comes to the galaxy far, far away. 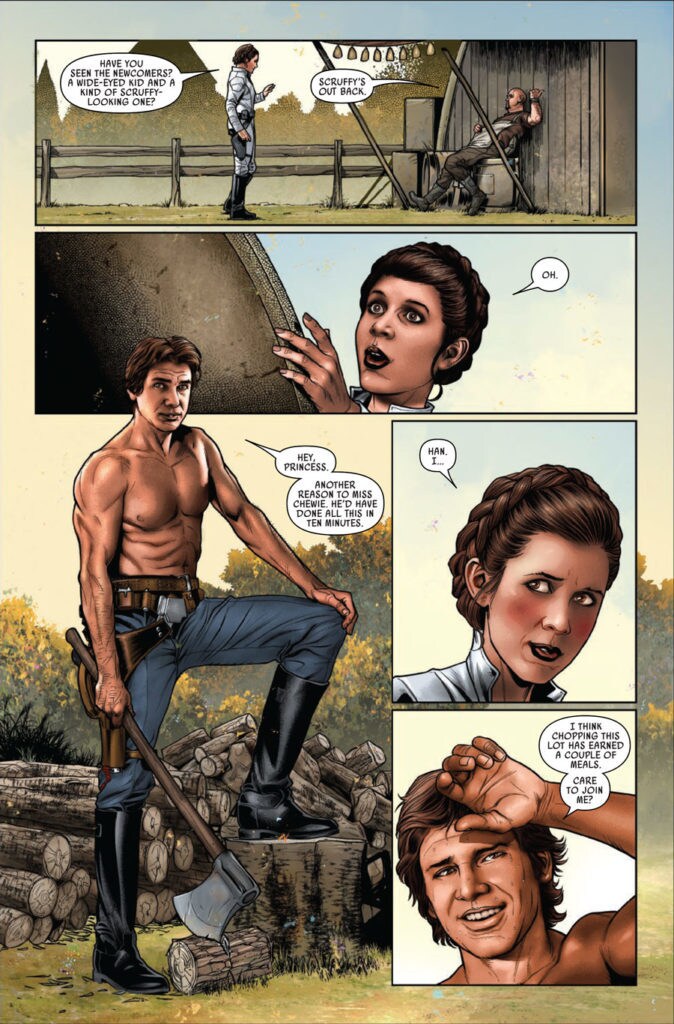 Star Wars #57 is one of those comics that truly needs to be experienced. From Shirtless Han (we had to include it) to the mystery of Markona, Gillen and Unzueta are showing us that Star Wars doesn’t have to have large stakes all the time in order to deliver an impactful story.