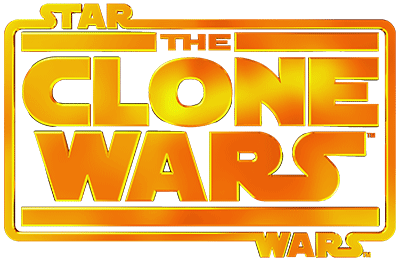 As The Clone Wars goes on, it continually advances the Star Wars mythos in new ways: it introduces new characters, it explores relationships, and it pulls back the curtain on things only glimpsed at or mentioned in the six-film saga. In 2012, The Clone Wars delivered these advances in spades.

The StarWars.com Team selected its top moments of the year for the groundbreaking animated series; check them out, and let us know what you think in the comments section. (Spoiler warning: Plot points will be discussed, so stop here if you are not caught up!) 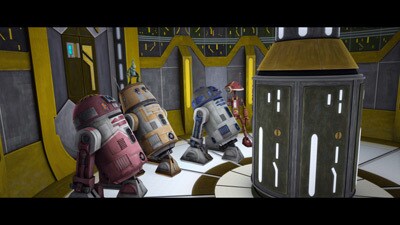 The premise sounds a little bizarre: a team of droids (including R2-D2) called D-Squad are led by a tiny alien colonel to infiltrate a Separatist dreadnought and recover an decryption module. But the results are actually thrilling -- each droid gets its chance to shine and show off its special modifications -- and the episode runs the gamut from espionage to action to comedy. Check out the accompanying Clone Wars Download featurette, "The Droids You're Looking For," to see how the creators of The Clone Wars pulled it off. 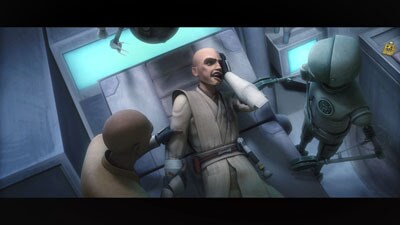 In the opening minutes of this episode, Obi-Wan Kenobi is shot, killed, and receives a Jedi funeral. Viewers knew he wasn't really dead, so what was going on? It turns out that Obi-Wan faked his own death in order to undergo a painful physical transformation to appear as Rako Hardeen, bounty hunter. From there, Kenobi uses his disguise to gain the trust of Count Dooku and Cad Bane with the hopes of thwarting their plot to kidnap Chancellor Palpatine. It put the series back in spy mode, which fits The Clone Wars surprisingly well, and the scene depicting Obi-Wan's transformation was just the right amount of creepy. Seeing Anakin's uncontrolled anger at Obi-Wan's death added yet another layer to the characters' complex relationship. 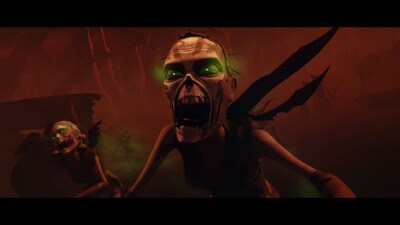 After Asajj Ventress fails in her attempt to destroy Count Dooku, she heads home to Dathomir. Dooku knows this, and dispatches General Grievous and a droid army to kill Ventress and all Nightsisters, the dark magicks practitioners of Dathomir. The resulting battle is one of the more unique ever found in Star Wars. The droids shoot blasters; the Nightsisters sling energy arrows, use magicks, and yes, raise their own dead to create a zombie army. The hazy setting of Dathomir gives it all an appropriately nightmarish feel, making "Massacre" one of the strangest -- and coolest -- episodes of The Clone Wars. 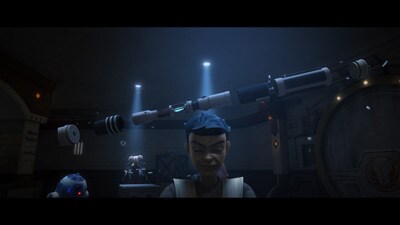 We were never privy to see the construction of a lightsaber in the Star Wars films, but it was something hinted at as being significant in the life of a Jedi. "I see you have constructed a new lightsaber," Darth Vader said to Luke in Return of the Jedi. "Your skills are complete." In this arc, viewers were treated to the entire process: Jedi younglings harvest their own lightsaber crystals in a rite of passage called The Gathering, and then assemble their Jedi weapons by using the Force in a meditative state, elegantly combining many disparate pieces. It's a major piece of Star Wars lore, and the scene in which the Jedi younglings finally assemble their lightsabers is fittingly magical. (Bonus points for having Gungi, a Wookiee youngling, incorporate wood into his lightsaber hilt.) Check out the Clone Wars Download featurette, "Crystals and Caves: A Jedi Rite of Passage," for more on how the creators of The Clone Wars approached depicting lightsaber construction. 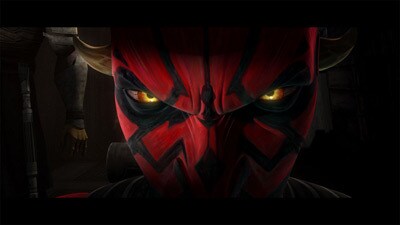 It's something everyone thought impossible. Darth Maul was chopped in half by Obi-Wan in The Phantom Menace, accepted as deceased in the Star Wars canon. And the introduction of Savage Opress, his brother, seemed to further drive that point home, as Opress was groomed to become a new Sith. But it was all a misdirection: Maul survived. Found by his brother on a junk planet, Maul had become a raving, tortured soul, complete with disturbing spider-like legs made of garbage. After the Sith Lord's mind was restored and he was gifted new humanoid mechanical legs by Mother Talzin, he was determined to get revenge against the Jedi and Kenobi. It all led to a thrilling rematch in which Kenobi took his lumps, and Maul was reestablished as a major Star Wars villain.

None of this would have worked or been believable had it not been for the stunning work by Dave Filoni and his team. Fans worried that Maul's return would cheapen the ending of The Phantom Menace, but if anything, it strengthened it. Maul clearly suffered in the time since his defeat at the hands of Kenobi; you hear it in his nonsensical ramblings and see it in his gaunt, confused face. It reinforces many themes from the Star Wars films, especially that one should accept death as a part of life. To hold on to life the way Maul did is an unnatural thing, and as a result, he became twisted. And in his reborn form, he comes to act as powerful foreshadowing for what will become of Anakin: a half-man, half-machine, driven by hate and ultimately tragic.