The Nute Gunray saga continues! Plus, the introduction of Weequay pirate Hondo Ohnaka. 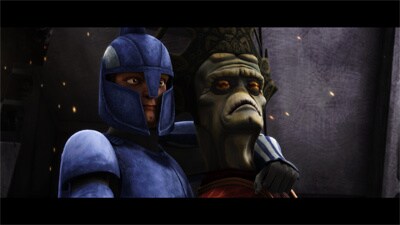 This episode picks up on Rodia immediately after the events of “Bombad General.” Nute Gunray’s escape while en route paves the way for his appearance in future episodes in the series and in Revenge of the Sith. Other Separatist leaders who get captured during the series only to later appear in Revenge of Sith won’t fare as well, spending much of the time span of the series in incarceration.

Luminara Unduli and her clone commander, Commander Gree, make their first appearance in the series. They will both appear in later episodes and are with the forces on Kashyyyk in Revenge of the Sith. This episode marks the first time that Luminara and Ahsoka have met. Ahsoka will eventually befriend Luminara’s Padawan, Barriss Offee, who shows up later in the series.

Sidious expresses concern to Count Dooku over whether or not Ventress is up to the task at hand since she had failed on several previous occasions. Sidious’s opinion of Ventress’s abilities will change later in the series. Following on the heels of “Cloak of Darkness,” Nautolan Jedi Kit Fisto (seen in Attack of the Clones) makes his first appearance in the series. He goes to Vassek expecting to find Nute Gunray, only to discover that Gunray is off-planet, appearing only as a hologram. Nahdar Vebb makes his first (and last) appearance. Grievous' confrontation with the Jedi is a test given to him by Count Dooku, following several high profile failures by Grievous, including the loss of the Malevolence, a defeat at Bothawui, and the destruction of Skytop Station. During their own attempt to capture Count Dooku, Anakin and Obi-Wan discover that the Sith Lord has already been kidnapped by pirates. 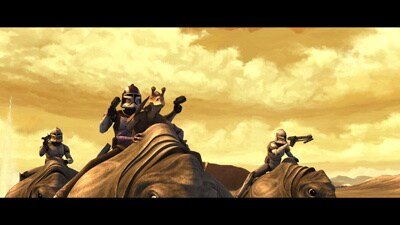 While negotiating Count Dooku’s ransom, Anakin and Obi-Wan are taken prisoner. The Jedi and Sith form an unlikely alliance in a bid to escape, with Jar Jar Binks as their only hope.

In this duology, Obi-Wan and Anakin are first introduced to the Weequay pirate Hondo Ohnaka and his gang. Hondo has a recurring role throughout the series, working both with and against the Jedi, depending on which path he finds more profitable. His actions in these episodes will have ramifications depicted in Season Five. We’ll see the planets Vanqor and Florrum later in the series.

Senator Kharrus is the first of two Gran Senators to meet their demise in the series. The staff he wields is one of many nods to Indiana Jones.


Check out StarWars.com to see the latest syndicated episodes along with the list of U.S. stations on which The Clone Wars appears.

Star Wars Inside Intel: The Creation of the Clone Army