Hot Toys Feels the Force: An Interview with Founder and CEO Howard Chan

StarWars.com goes inside the process of Hot Toys' stunning collectibles.

If you've ever mistaken a photo of an action figure for a movie still, you might have been looking at something made by Hot Toys. Based out of Hong Kong, Hot Toys has been producing high-end Star Wars figures since 2014, covering the entire Star Wars saga in 1/6 and 1/4 scales. Its work is nothing short amazing, a testament to the growth of what's possible in a collectible. Face sculpts, from Han Solo to Jyn Erso from the new Rogue One line, that look real; outfits and accessories, like Luke Skywalker's cloak or Rey's Jakku tatters, made of actual, weathered cloth and leather. Indeed, if Kenner marks the start of the evolutionary Star Wars toys chart, Hot Toys is somewhere near the end. 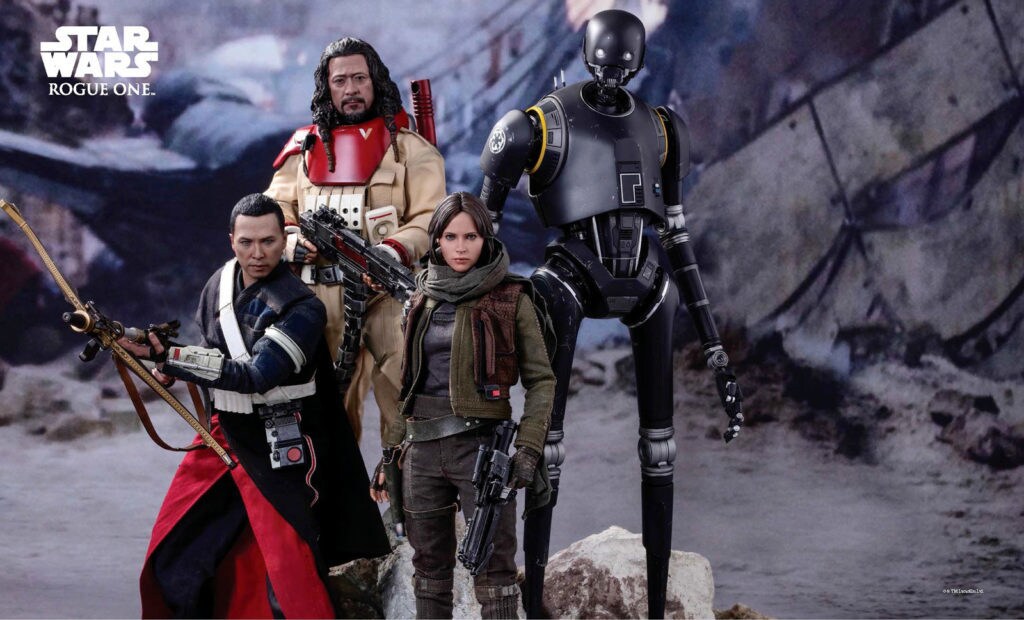 "It is actually one of Hot Toys’ goals to create highly-detailed and realistic 1/6 and 1/4 scale figures as if the characters look like they come straight out of the movie," Hot Toys founder and CEO Howard Chan tells StarWars.com over e-mail. Achieving that I-can't-believe-it level of realism in a figure comes through a rigorous process. "Whether it is Jyn Erso or other figures, our production team will first start with doing thorough research on the character’s visual and related information from the trailer/film," Chan says. "Following some in-depth internal discussions, we will find the most suitable head sculpt expression, hair style, outfit, and accessories for the character to be made into a collectible figure, then send the concept to Lucasfilm for approval. Once we get the green light, the prototype development starts where we will sculpt the highly detailed head sculpt, find the best articulated body for the figure, tailor the outfit, and create the weapons and accessories." 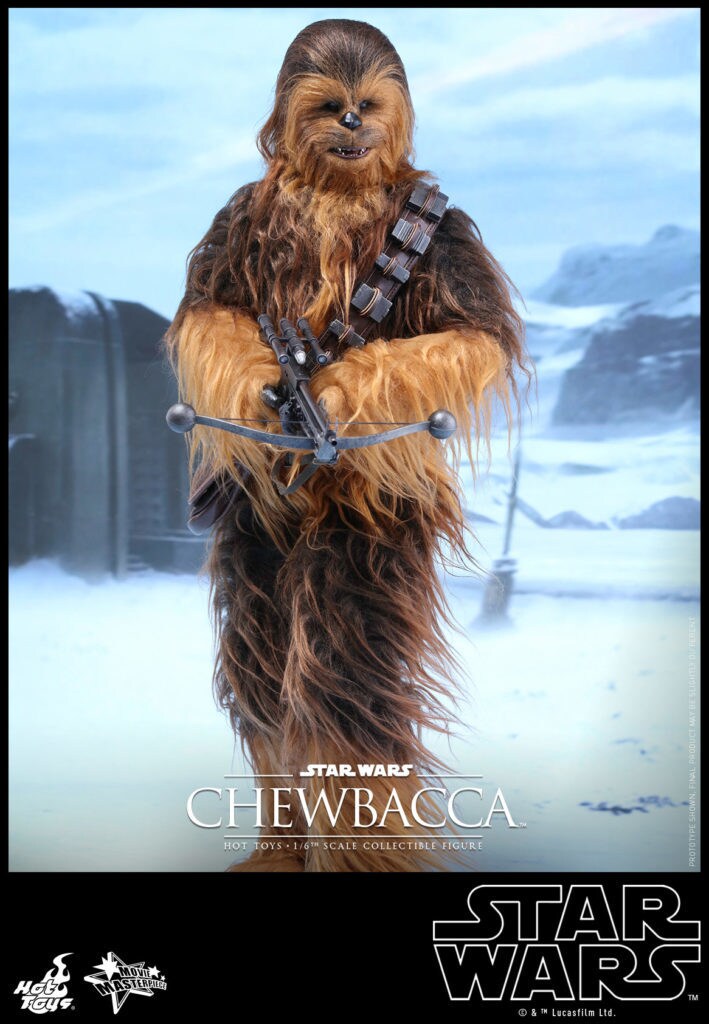 Hot Toys has improved production time on its figures -- the first 1/6 scale Stormtrooper took nine months from prototype to mass production, while the new Rogue One line only was completed in only four -- but aesthetically, its figures have been stunning since launch. Chewbacca, one of Hot Toy's earliest Star Wars creations, doesn't feature sculpted fur. Thanks to the company's meticulousness, he's much closer to the walking carpet we know and love. "It is Hot Toys’ first collectible figure with full body of fabric hair," Chan says. "Our team used special tailoring techniques to create the multiple layers and shades of soft hair. This is definitely a breakthrough to our product development and one of the first Chewbacca collectible figures out there that features such fur." In this sense, Hot Toys truly let the Wookiee win. Still, it's actually not the faces of aliens or creatures that provide the greatest challenge. No, the hardest sculpts to nail down are of those that hail from our own galaxy. "Overall, figures with human likeness are more complicated to create," Chan says. "When we work on the head sculpt, we are not just trying to recreate the face and shapes, but to express the characters’ spirit and personality."

There is one Star Wars character, however, that stands above the rest for those at Hot Toys: one portrayed by a hometown hero. "As a Hong Kong-based company," Chan explains, "Hot Toys is very honored and thrilled to have the opportunity to create a life-size statue, 1/6 scale collectible figure, and Cosbaby bobblehead figure of Hong Kong’s celebrated martial artist and actor Donnie Yen. It was relatively rare to see a Chinese actor starring in Hollywood blockbusters, and now Donnie has become a widely acclaimed international superstar with his extremely talented skills." If you look closely at the actual 1/6 figure, the likeness is astonishing -- it looks exactly like Yen in Rogue One, right down to the angular features of his nose, the definition of his cheekbones, and the clouds in his eyes. Aside from making the Chirrut figures, another high point came in a very special opportunity for Hot Toys. "During the Asia press tour for Rogue One, Hot Toys presented the 1/6 scale Chirrut Îmwe collectible figure and bobblehead to Donnie Yen himself," Chan says. "He was absolutely stunned by the incredible details and realism, so our team was very happy to hear such kind words from him and definitely became one of our proudest works of all time." 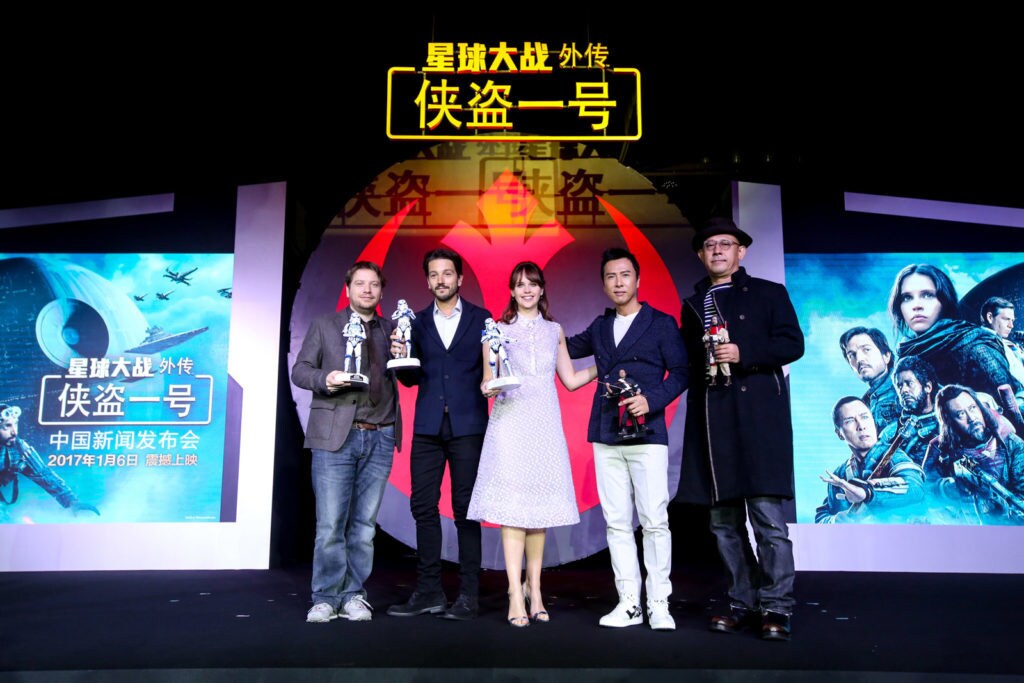 The pride that Hot Toys and Chan have in their Chirrut Îmwe figures, however, is just emblematic of what it means for them to make Star Wars toys at all. It's a dream come true. "Many Hot Toys fans would probably know already that I am a Star Wars super fan," Chan says. "I’ve been in love with Star Wars since I was very young and it has been a goal of my life to create incredible Star Wars collectibles after I founded Hot Toys. After officially acquiring the manufacturing license for Star Wars collectible products [in] 2014, [my goal] is not just to express my passion for Star Wars, but to also let fellow Star Wars fans out there enjoy all these stunningly detailed collectibles from this captivating galaxy from far, far away."