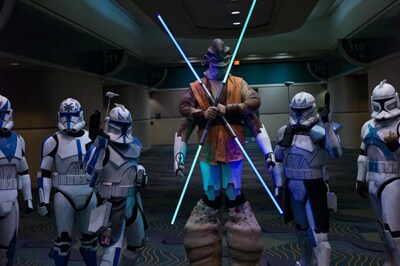 I’m sorry it has been so long since my last blog. When I am away from the office as long as I was for Star Wars Celebration VI, there is always a lot to catch up on when I get back. I can now say that everything is pretty much back up to speed and The Clone Wars is moving forward, bigger and better than ever.

I hope those of you who attended Celebration enjoyed it as much as I did. There is something truly unique about an event where everyone has gotten together to share, experience, and cheer on the same thing. I had the pleasure of meeting fans from all over the globe, and the enthusiasm is contagious.

I think CVI was the best Celebration of the three that I have been to. I must really thank the staff at Lucasfilm who puts it all together, especially my friend Mary Franklin, who works tirelessly to make it all happen. To the behind the scenes people, the ones guiding you from panel to panel, the volunteers taking time to assist fans in need of direction and the stage crews who make all the panels flow smoothly - Thank you all for doing such an extraordinary job each day! You made the event a memorable and rewarding one for all of us. This year, more than any other, I felt the love of the fans for The Clone Wars. I truly wish my crew could have been there to experience all of your cheering, and appreciation for their work. Joel (Aron) and I were amazed by how much you know about the show now. We were also really flattered by those of you who recognized us and came up to say hello. When I am at Celebration I hope you all know that I am there for you, the fans, and every moment I am at the convention I am dedicated to giving you the best experience possible. Every panel we did was packed and it is great to hear your reactions to what we have to present. You questions were, as always, both challenging and thoughtful. Thank you for that. I also really enjoyed teaching the Story Class. I am always trying to improve on that in the hopes that you can really take away a unique educational experience. 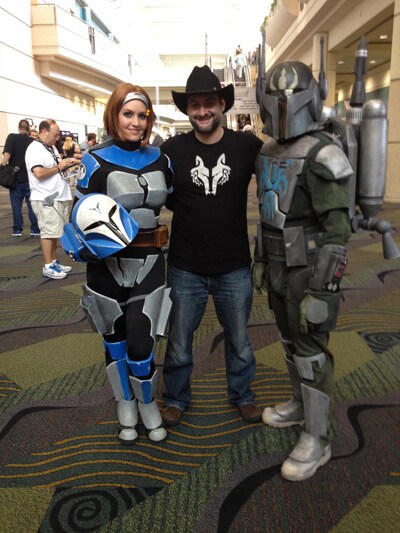 The costumes at CVI were AMAZING! I met Bo-Katan, Pre Viszla, General Krell, Ahoska, Captain Rex, Mother Talzin, Ventress and just about every clone in the show. Heck - even Stephen Stanton got in on the fun and dressed up as Tarkin, the character he voices on the show. Nightsisters resurrected Ventress on the convention floor, Rako Hardeen made an appearance, and my Wolf Pack was everywhere! I just love it. It’s so fun to see the costumes and meet the people who made them. Thank you all for your hard work and dedication. 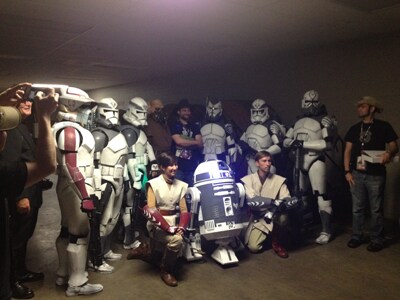 In a truly crazy moment at CVI, I was walking outside the convention hall and I got a call from “the maker” himself. I quickly grabbed a pen and knelt down in the grass to take down notes George had on an upcoming episode. It was a pretty funny moment, and Joel Aron captured it on film. What you don’t see in the picture are the many fans who had gathered nearby to talk to me, none of whom had any idea who I was on the phone with, which made it pretty funny for me. If only they knew that a day later George himself would make an appearance. George coming to Celebration was really great for both The Clone Wars and the newest Star Wars project, Detours. It was something that George decided to do on pretty short notice, so it was a closely guarded secret. George really felt that he wanted to go and give support to his two animated series, and we all really appreciated the gesture. George is the starting point for us. His vision and constant interest keeps us inspired and motivated. I think George was fantastic on-stage and I hope it was a fun surprise for all of you who were there with us. He even put my cowboy hat on - what a photo-op! It was a great moment for us, that’s for sure. A little piece of CVI trivia - when George watched the trailer with all of us in the panel, that was the first time he had ever seen it! It was exciting for me to watch his reaction to the trailer, which was edited by my friend Kevin Yost. George really loved it and we hope you did too. I want to also take a moment to recognize my friends who have worked long and hard on Star Wars Detours, and express the pride I have in what they have accomplished. I have known Matt and Seth for a while now, and they have always been a great support to me and the entire Clone Wars crew. When I heard that Lucasfilm would be working directly with those guys on a new show, I was all for it. I knew that the love and respect they have for Star Wars would show up on screen, no matter how crazy the humor might get. Todd Grimes (Supervising Director), Jennifer Hill (Producer), and Brendan Hay (Lead Writer) crafted an incredible show with amazing animation. We all want everything we do at Lucasfilm Animation to be of the highest quality. I think Detours is a great addition to our studio, and I am extremely pleased that the Detours team had the opportunity to share the results of their hard work with you all at Celebration. 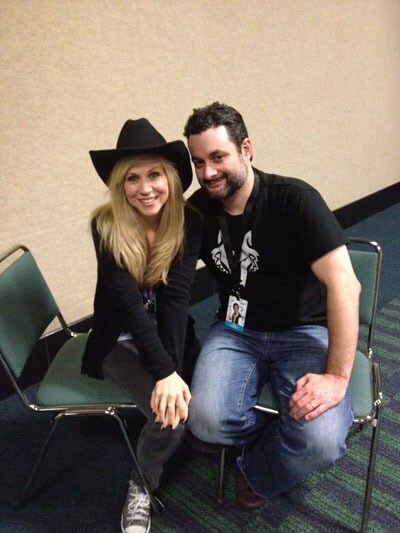 Speaking of hard work, I received some truly incredible gifts from many people I had the pleasure of meeting at Celebration. Some were handcrafted items, some were things that the artist spent their own money to have produced for Celebration. I have been fortunate enough to receive some really amazing gifts, but I have to say this Celebration was THE BEST! Two words - WOLF PACK! You guys hit me with more wolf pack swag than I thought possible. Custom T-shirts, custom coins, custom patches. AMAZING! I met Wolf Packs from Australia, Calgary and Florida, and heard of one in the UK. I think this is becoming a global phenomenon, and I want to fully encourage the formation of more Wolf Pack squads in the 501st - go for it! I’m going to get my local Garrison (Golden Gate) going with more West Coast Wolf Pack gear. For you hockey fans out there, I also got a signed Sidney Crosby puck!!! At a Star Wars Celebration!?! Gotta love my home town folks in Pittsburgh, PA. Thank you all for your kindness and generosity. It means a great deal to me. Check out the pictures for some of the amazing stuff. 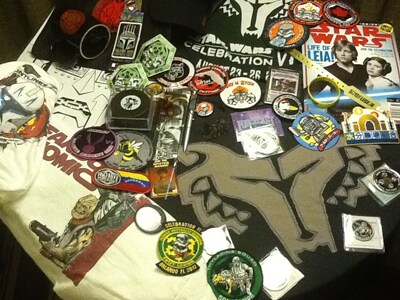 And while we are talking about amazing and dedicated fans, I have to mention my friends Jason and Jimmy over at the Forcecast. I rarely get to see these guys in person, but when I do it’s always fun. These guys have been great supporters (and critics) of the show since we started, and it’s always fun to get their point of view, even when I’m messing with them. The day I was on the Forcecast happened to be Jason’s Birthday, so he wore a hat which (while not as cool as mine) made the interview more festive. Not to be outdone, Jimmy Mac decided to express his loyalty for the Wolf Pack by getting a tattoo of the wolf logo. His first tattoo ever! WOW! Would Kitster approve?

Many people have asked me what I enjoy most at Celebration. It’s always hard to pick just one thing. I just love being there. I love the feeling that everyone is there to celebrate one thing – our love of Star Wars. It’s great to meet the fans both young and old and it is great to meet Lucasfilm legends who worked in front of the camera and behind the scenes. The tribute to Ralph McQuarrie panel was a very special moment for me and many other fans. Watching George walk on stage to thunderous applause was another great moment. I even get to see people that I have known now for many years, friends of mine from my local Garrison of the 501st capture the imagination of other fans through the hard work they put into making some truly incredible and inspiring costumes. I got to finally meet more of the Emerald Garrison and saw Julian Checkley win an award for his Savage Opress costume. I could go on and on about the many inspirational fans I have met over the years. I guess what I am trying to say is that for me, watching everyone have such a great time at Celebration is the best part. Watching people come together and share in a positive light, something that inspires them, something they love, that is the most gratifying part of the whole thing. Well done Star Wars Fans. You have made another Celebration an amazing and memorable event. I hope you had as much fun as I did. I do my best to be there for you guys, meet as many of you as I can, answer as many questions as I can, and really make the trip to Celebration worth your while. So thank you again! Now, on to Germany!