SWCVI: Bounty Hunters, We DO need your scum! 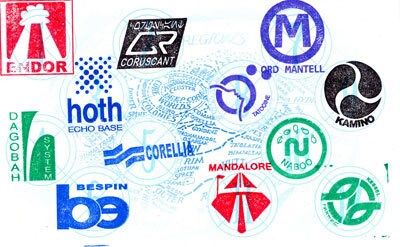 Hello! I'm James and I'm one half of the brains behind the Bounty Hunt atStar Wars Celebration VI. My friend Dan and I have been organizing photo scavenger hunts and puzzle races for several years now, and we're bringing all our fiendish fun to Orlando. We think that the Bounty Hunt is great for Star Wars fans who want to do something fun, exciting, and active at CVI. This is our third time putting on a clue solving adventure at Star Wars Celebration, and we've got a few new tricks for this year.

First off, what is the Bounty Hunt all about?

It's like "The Amazing Race" just for Star Wars fans - you and a partner (or up to a team of four) will be solving puzzles and clues as a group of bounty hunters searching for your targets. Each clue, when solved, will lead you to the name of a bounty hunt target. You'll look up the name on your team's scorecard, and it will list a location somewhere in the convention center - it might be on the main exhibit floor or in a random hallway on another level. You'll race over there and earn a stamp on your scorecard indicating that you've successfully found your target. Some of the targets will make you complete a challenge first before giving you the stamp - you might have to toss a beanbag thermal detonator into an exhaust port, do some nerf gun target practice or play a game of Sabacc. Each target is worth a different amount of credits, based on the difficulty of the clue. Get stuck on one? Move on to another target - you'll have a stack of clues representing several bounties that can be earned in any order. Meanwhile, you'll be competing against a big mess of other bounty hunting teams - up to 100 teams in each hunt. It's like "The Box" from The Clone Wars, amped up (but without poison gas). The team with the biggest credit count (and took the least amount of time doing so) is the winner. And there's some cool prizes, not to mention serious bragging rights.

What's new for the Bounty Hunt at Celebration VI?

While we are doing three different challenges again, we are going for our first evening challenge - after the exhibit hall closes, as the sun sets on the convention center, it's time for a hunt in the shadows of the Empire! Just like the dimly lit lower levels of Coruscant, there's more risk -- and more reward in the dark corners. The evening challenge will be held on Friday, from 7 PM to 9 PM.

We also will be having a hunt on Thursday in the mid afternoon (2 PM to 4 PM) and Sunday in the early afternoon (12:30 PM to 2:30 PM). We've had quite a few adventurers tell us that playing in the Bounty Hunt was the best part of their Celebration experience, so if you're interested, you can sign up on the day of the hunt you wish to participate in. All our online registrations spots are currently taken, but we've reserved half the spots in a race for teams to sign up onsite, and will also open up any spots reserved by online teams if they fail to check in 90 minutes before race time. Best of all - it's free, and we have trophies and awesome prizes for the top teams. How much fun is it? Quite a few competitors at Celebration V came back to play in the Bounty Hunt all three times! 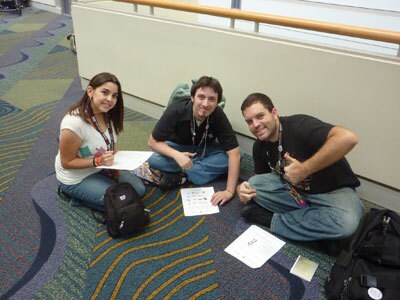 Dan and I put together our first Star Wars themed challenge, the Kessel Run, at Star Wars Celebration IV, where teams had to solve clues (in three difficulty divisions) in order, and race in and around the LA convention center. At Celebration V, we held the first Bounty Hunt series, bringing our brainteasers to a bigger audience, with three separate events spread across the weekend. And now we're back with even more sinister clues.

How tough is it?

We design the Bounty Hunt to be accessible to everyone, from "I think Chewbacca is a Wookiee" to "I can name twenty Hutts". The puzzles for the easy targets use either basic Star Wars trivia or are so easy a Gamorrean can do it, while the higher value puzzles might require a bit more brain power, or might have a challenge to face before earning that stamp! But we'd rather you be able to solve the clues than get stuck, so be on the lookout for hints during the race. In fact, here's a hint to start you off: know your Star Wars genealogy - not just the Skywalker clan, but others with ancestors and descendants... or master/apprentice relationships. 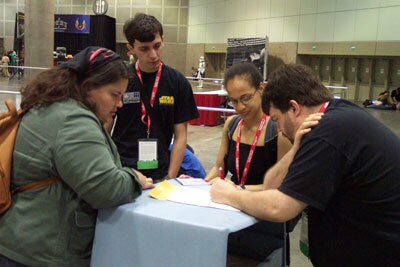 What's some good strategy for the Bounty Hunt?


Looking for a teammate or want to talk smack about your competition? Join the conversation on Facebook and see you on the hunt!