Dave Filoni, executive producer of Star Wars Rebels and Pablo Hidalgo of the Lucasfilm Story Group came together on the first day of Star Wars Celebration Orlando to give a behind-the-scenes look at some of the most beloved animated characters, ships, and storylines from Star Wars: The Clone Wars and beyond. Here are 11 of the most revealing insights and surprises from the panel, as well as sketches and concept art shown throughout. 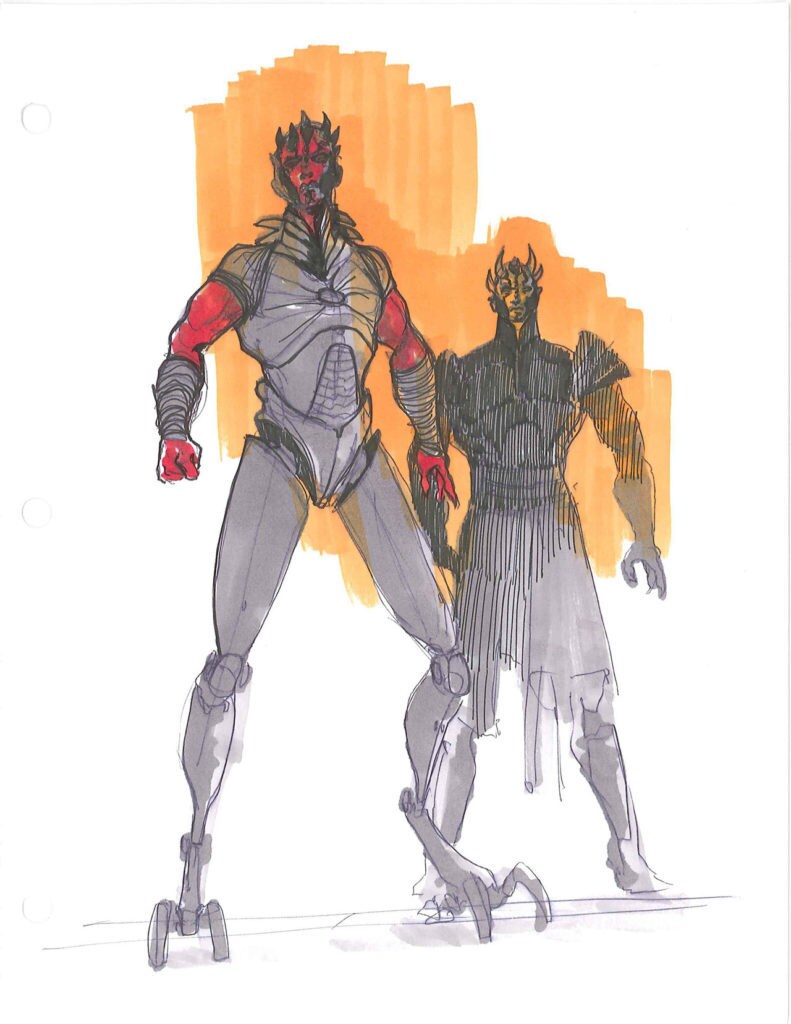 1. Savage Opress (and George Lucas) were instrumental in resurrecting Maul from the dead. Once he had seen the other son of Dathomir in his animated glory on The Clone Wars, Lucas approached Filoni about adding Maul to the cast, complete with spidery legs. “I’ve got an idea and you’re going to love it,” Lucas told him. “Oh...that so seldom lines up,” he joked. After seeing The Phantom Menace, he — like many fans — had assumed Maul was never going to heal. “It’s over. He’s cut in half. How does that work?” Filoni told Lucas of his idea for resurrection. Lucas’ advice? “I don’t know. Figure it out.” 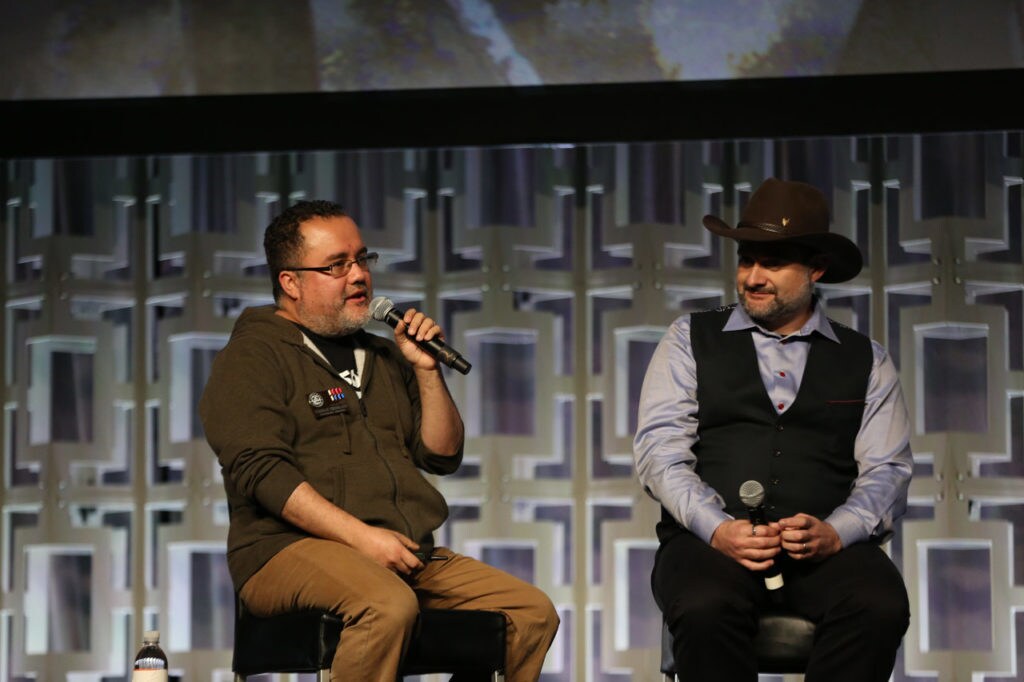 2. Filoni is a fan of cosplayers — including the 22 clones and rebels that marched out in the middle of the panel. The panel showcased maquettes, rough sketches, and complete artist renderings to explore the origins of some of the saga’s favorite animated characters. But Filoni was clearly tickled by the fans who had put their own real-life spin on his creations.

When the cosplayer portraying Captain Rex removed his helmet, he revealed tufts of bleach-blond hair. “Oh! You’ve got the hair,” Filoni exclaimed.

Seeing his characters come to life is always a rewarding experience, he said. The dream - “To draw something on a piece of paper and a year or so later to have it walk up and say hello.” 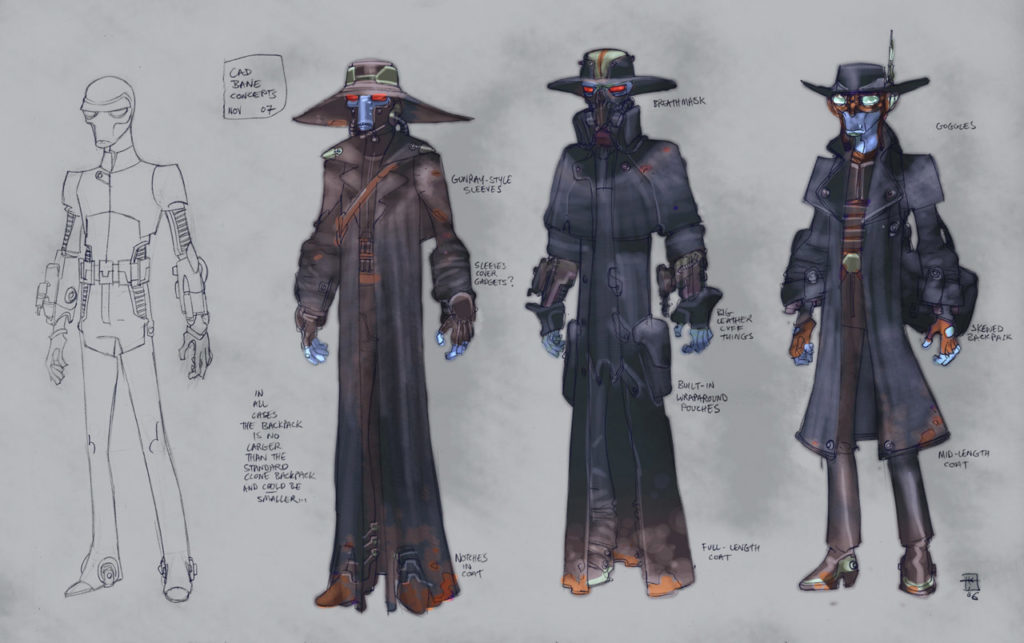 3. Cad Bane is responsible for the origins of a certain bounty hunter’s dented helmet. In a never-before-seen clip from Star Wars: The Clone Wars shown during the panel Thursday afternoon, Bane and Boba Fett have an Old West, quick-draw-style gunfight that ends with both bounty hunters flat on their backs. It was a fitting choice for a character that was originally envisioned as a gunslinger in the style of Lee Van Cleef 's “Angel Eyes.”

Although there’s no way to know if Bane survived the showdown, Boba Fett lived but was forever marked. The scene closes with a curl of smoke coming off the fresh blast mark on his now empty helmet as it rolls away, reminiscent of his father Jango Fett’s fatal encounter with Mace Windu.

“If we had a little more time, we’d tell you what happened to Ahsoka and Cad Bane,” Filoni joked at the end of the hour. 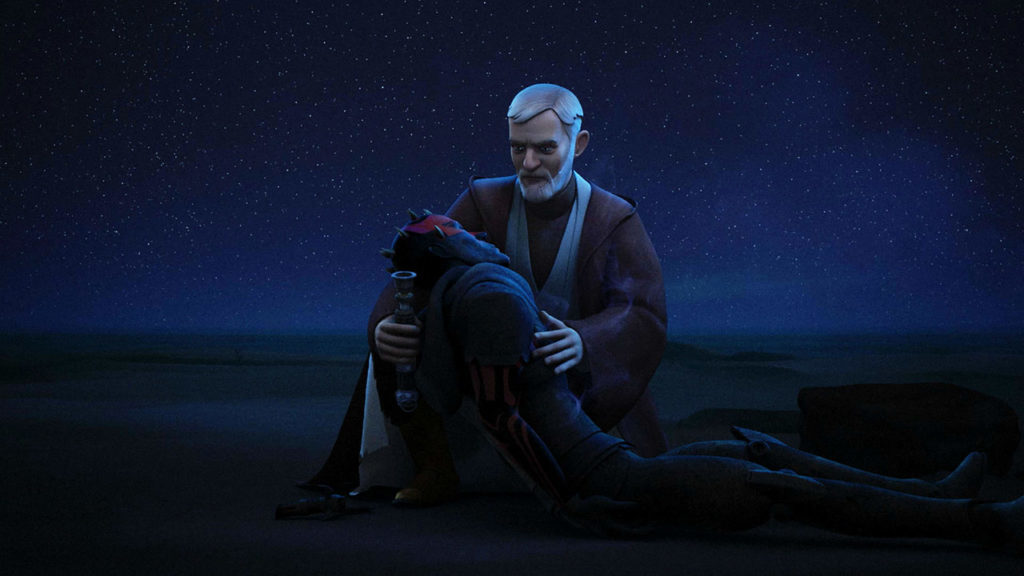 4. The recent Star Wars Rebels episode “Twin Suns” was originally 35 minutes long. Showrunners were forced to leave extraneous scenes on the cutting room floor, choosing to pare down the lead up to the final duel between Maul and Obi-wan Kenobi with a tight focus on Ezra’s journey on Tatooine. “I kept as much [Sam] Witwer as I could because Sam will call me,” Filoni joked. That meant some scenes with Kanan and Hera were on the chopping block. The audience groaned. “Not like that, like you want,” Filoni said. “It was about their side of the family. And Zeb was there, too.”

To fit the essentials into 21 minutes, Filoni also ditched plans to include hauntings from Maul's past on his journey, like a vision of Satine and an apparition of Savage. The Nightbrother even made it to the design phase before Filoni thought better of it. In an already lengthy episode, time couldn’t be spared to explain Savage’s origins and creators couldn’t risk alienating new fans who would be confused by his sudden appearance. “This is going to sound strange, but no one’s going to know who this is,” Filoni said. “If Rebels is all you know...You can’t take for granted that people know what it is.”

“This episode is so stripped down,” Hidalgo said, but by eliminating the nonessentials, it made the core story even stronger.

5. But the original storyboards did call for many of the specific shots and moves that made it to the final episode. Filoni showed off his original storyboards, including the hand-drawn sketch that set the symmetry of the scene. “It’s like a gods’ eye view,” he explained. Some of the dialogue was rewritten in the process, but those tight shots of hands reach for sabers and the brevity were all part of the original plan. Hidalgo called the three-move takedown “an economical fight,” noting that “it was actually shorter on the storyboard.”

6. Clone Captain Rex was originally set to be Alpha-17 from the old Dark Horse Star Wars: Republic line. Hidalgo revealed the character's origins, but creators balked at the alliteration of pairing Ahsoka, Anakin, and Alpha-17 together, like the A-Team. “Then George named him Rex,” Filoni said. 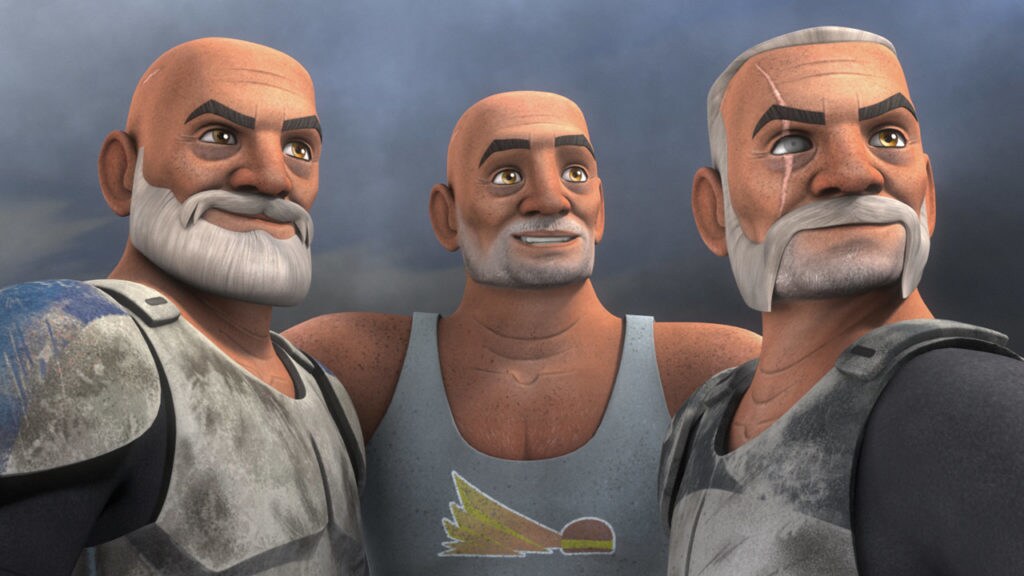 7. We haven’t seen the last of the Lost Commanders. Rex, Wolffe, and Gregor from The Clone Wars returned to the screen in the Star Wars Rebels episode “The Lost Commanders,” building off an idea that had originally been sketched into Lucas’ notes. “I’m from Pennsylvania and when you get old, you go to Florida and you fish,” Filoni said. That image helped to shape the episode, although Filoni said he originally wanted nine clone troopers to have survived, an homage to Walt Disney’s original core animators nicknamed Disney’s Nine Old Men. “I think Jesse was there,” Filoni said. “It’s hard to remember who got shot now. They all looked alike.” 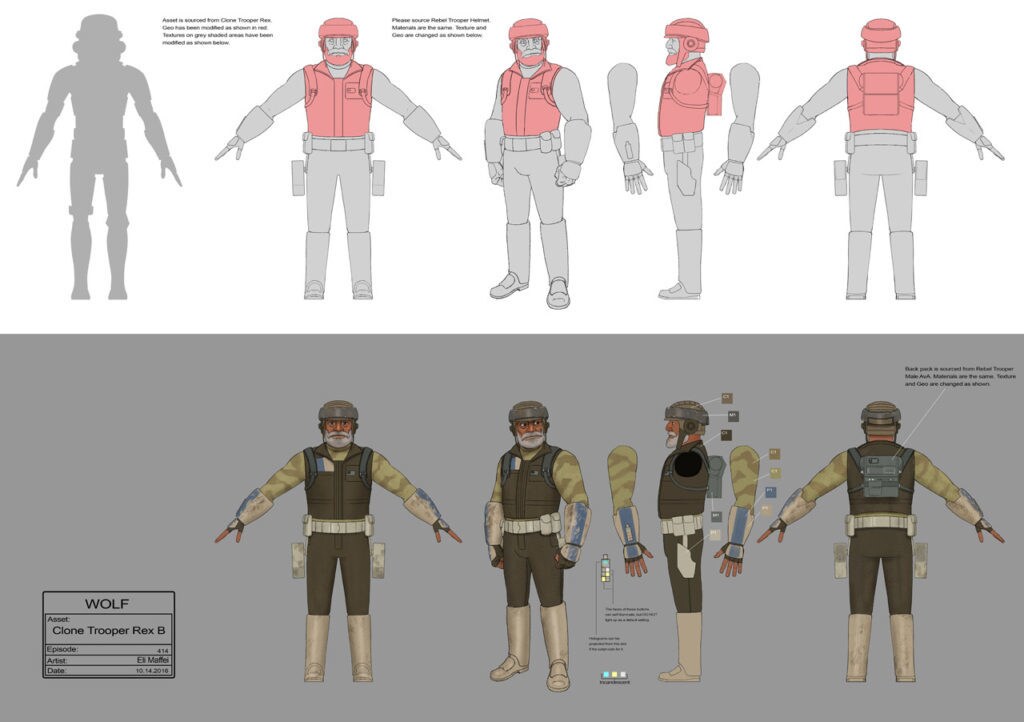 Of the three that made it, Rex is the only one who’s reappeared after joining the rebels, but the pair gave a sneak preview of an old clone in new fatigues. “I like these two. I would say it’s very probable they come back next season,” Filoni said. 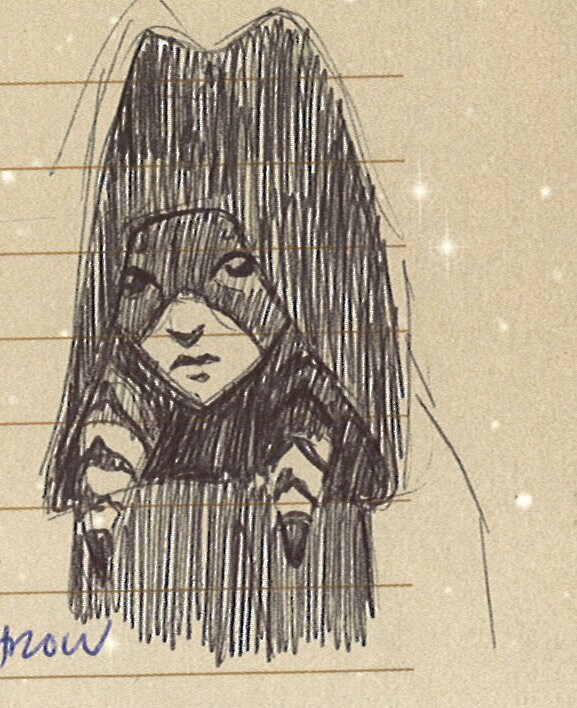 8. The Rebels incarnation of Ahsoka, with her blinding white lightsabers, is Filoni’s favorite design. The audience was treated to plenty of artist renderings and early drawings to showcase the evolution of characters’ looks, including Ahsoka. In a 2005 sketch, she was just a shy Togruta girl peeking out from beneath her oversized Jedi hood. Audiences didn’t meet the character for another three years, and over that time she tried on different costumes and facial markings and had her named changed from Ashla, before the team arrived at the version that made it to Star Wars: The Clone Wars movie, influenced by San in Hayao Miyazaki’s Princess Mononoke. An early maquette had more angular features, but Lucas voiced some concerns over her larger alien head, suggesting softening her features to make her more relatable. 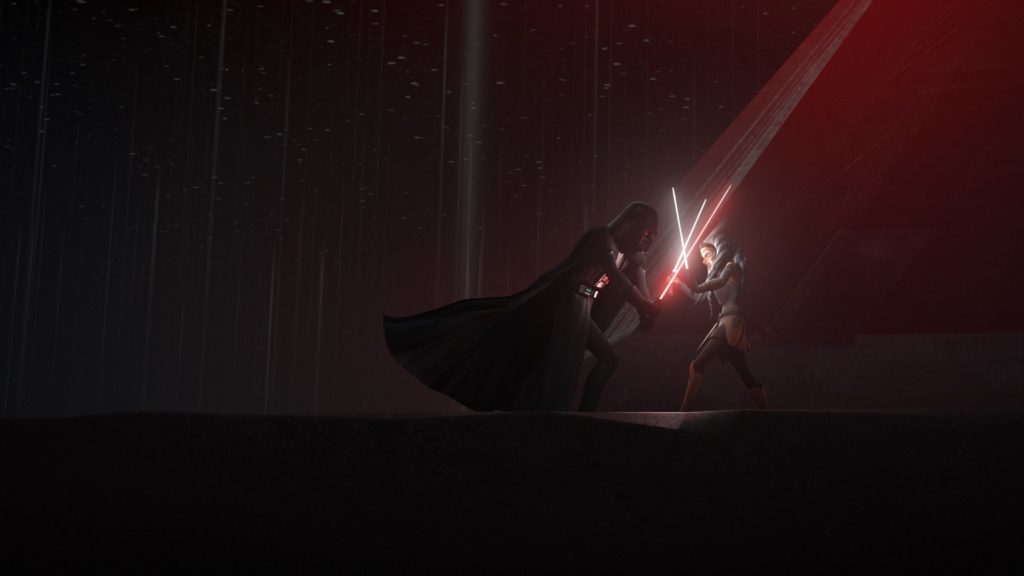 9. Don’t even think about asking what happened to Ahsoka. Hidalgo's shirt says it all. Filoni and Hidalgo are still staying tight-lipped about the fate of Ahsoka. Although voice actor Ashley Eckstein’s fashion line Her Universe optimistically created an Ahsoka Lives shirt, there’s no telling if the former Jedi survived her battle with Darth Vader at the end of Rebels Season Two. To riff on the shirt, Filoni made his own tee, revealed beneath Hidalgo’s sweatshirt -- Ahsoka Lives?

“There is more to say but it’s not going to be said here,” Hidalgo said, reminding Filoni that at a previous panel he had promised to address Ahsoka’s fate on screen at some point in the future. 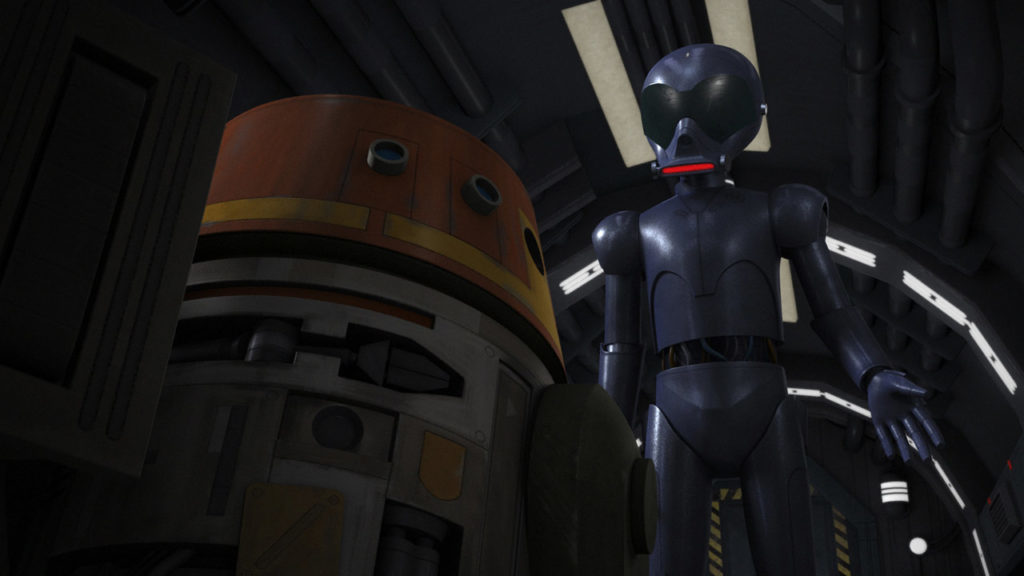 10. But you can expect to see more episodes dedicated to the antics of the Ghost crew's infamous astromech. Filoni revealed that it takes a year and a half for a storyline to move from creation to the screen debut, but there's at least one mainstay each season. Filoni is fond of using the curmudgeonly Chopper and now his counterpart AP-5 to cut the tension when he can. “One deep meaningful episode and then one about Chopper by the end of every season.”

Although he was nervous to have the live-action Chopper on the set of Rogue One. “You don’t want Chopper to be the one that knocks over Mon Mothma.”

“Because he was getting in everyone’s business,” Hidalgo joked.

11. Showrunners are still looking back at original ILM techniques and archived sketches for inspiration. The CG model of the Ghost on Rebels has painted on details, but for Rogue One Easter eggs, designers went back to the original ILM modeling playbook, digitally kitting out the film version with bits and pieces “so that she would be ready for her big screen debut,” Hidalgo said. The Hammerhead Corvettes are also a nod to Knights of the Old Republic, while another ship was plucked from where it was languishing in the archives, previously intended in the background of Return of the Jedi.