Discover the philosophical meanings of Luke Skywalker's dreamlike experience in The Empire Strikes Back.

From the moment Luke Skywalker enters the Dagobah cave, a sense of tension, not unlike something out of a horror films, grabs hold. This pivotal scene encapsulates some strong metaphors that are prevalent in the study of literature, and helps us to learn more about the young hero through this important phase in his burgeoning Jedi career. The use of the cave as a metaphor has long been a powerful symbol of what lies beneath the surface, and has impacted storytelling for generations.

The motif of the cave is as old as Homer’s Odyssey, as Odysseus finds himself trapped with the beautiful goddess, Kalypso, as well as the Cyclops, Polyphemus. Odysseus faces both fantasy and fear, respectively, and has opportunities to learn from the experiences. Kalypso seeks to enslave Odysseus, and the Cyclops wants to make a meal of the Greek hero. Odysseus experiences delayed growth through poor choices in these settings, and this leads to more strife for the hero. Odysseus’ rash choices lead to inopportune moments for him; Yoda echoes similar sentiments to Luke before his entry into the cave. Both Odysseus and Luke face fantastical elements, as well as frightening ones through the motif of the cave, and audiences learn more about each of them in the process.

For the philosopher Plato, the cave represents the confusion between what is real, and what is false. It is a metaphorical journey into the window of one’s inner self, and just as Luke explores the inner sanctum of the cave on Dagobah, he must also journey within himself to face his biggest fears. Not only is he concerned that the shroud of Darth Vader and the Empire will overtake his friends, but he also faces inner turmoil through the revelation of what he may become once he sees the visage of his face entombed in the black mask of the beheaded Dark Lord. The test of the cave in literature is often as big of an exploration of unexamined geography as it is the unexamined self, and the poetry of the scene leaves us with a feeling of ominous ambiguity for the intrepid, young Skywalker.

When Yoda is asked by Luke what is in the cave, Yoda responds, “Only what you take with you.” Luke’s immediate response to this helps shape the darkness he experiences in this dreamlike encounter, and audiences witness the true conflict inherent within. Luke brings in weapons, his lightsaber and blaster, presumably introducing violence into the natural world, further manifesting his fear, which comes to full fruition in the cave. It is difficult to ascertain what might have happened if Luke had kept his belt sans weapons, but what he does experience offers a cryptic sense of foreboding that haunts him throughout the rest of the original trilogy. 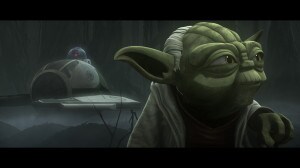 The cave also serves to magnify the fear of Yoda, as well as guide his self-reflection in the Clone Wars episode "Voices" from Season Six. Yoda sees the confrontation between Darth Sidious and the Jedi who attempt to arrest him, as well as many harbingers of what is to come in Revenge of the Sith. The audience learns about Yoda's fear of failing his friends and the Jedi Order in a more direct, profound way than was previously explored. The dark side of the Force clouds everything, and the cave personifies this through the 900-year-old Jedi Master's experiences on the planet that would soon serve as his refuge and exile.

The cave in literature is a powerful motif that serves to lend itself to an examination of what lies beneath the surface of what is real and what is fantasy. Both Luke Skywalker and Yoda find themselves in a position that will either lead to great fear or great insight of self. The power of the dark side magnifies this confusion, thereby continuing the tradition the cave has employed for as long as stories have been told.