The acclaimed author of The Martian and Project Hail Mary on the storytelling feats of the Battle of Hoth.

In My Favorite Scene, StarWars.com invites special guest writers to discuss which one scene or moment in the saga resonates with them most. In this installment, Andy Weir, author of The Martian and the new Project Hail Mary, discusses why he loves the centerpiece action sequence from Star Wars: The Empire Strikes Back.

Star Wars is a story of bravery, destiny, valor, and perseverance. But none of those come without setbacks, failures, and defeats. And nowhere is that more strongly demonstrated than in the Battle of Hoth. It’s one of the most convincingly detailed and logical sci-fi battles ever shown on film. The stakes are high, you fear for the characters’ lives.

And in the end, the good guys lose.

As a viewer, you go into a battle scene expecting the heroes to win the day, no matter the odds. Some brave stand or unexpected reenforcements will turn the tide at the last second. But in the Battle of Hoth, there’s no such moment. There’s no exploitable weakness in the enemy attack. The cavalry never comes. The rebel forces are absolutely smashed, forced to retreat under heavy Imperial fire, losing soldiers, ordnance, and military materiel that they can scarcely afford to lose.

But it’s not just the outcome that’s satisfying -- it’s the intelligence and logic the screenwriters use to get us there. Granted I don’t know the first thing about real combat engagements, but there’s such a satisfying flow of move and countermove to it, with a mix of realistic-feeling mistakes and smart tactical deductions.

After the events of Star Wars: A New Hope, the rebels are on the run. They’ve destroyed the Imperial superweapon, but their main base at Yavin 4 is now known, and it’s just a matter of time before a massive Imperial fleet comes to erase it. So they relocate to the ice planet of Hoth.

Unfortunately, the enemy forces find them and, well, the Empire strikes back. But then comes the first mistake and the countermove: the Imperial forces come out of hyperspace too soon, leaving the rebels time to get their orbital shields up. So what could have been a simple bombardment from space now has to be fought out on the ground.

The rebels have made their own catastrophic error, though. They’ve got a strong fleet of skirmishing fighters optimized for Hoth’s atmosphere and temperature: snowspeeders. They’re well prepared for a battle against enemy TIE fighters, which would be the obvious option for a low-altitude attack. But that isn’t the battle the Empire brings.

Enter the AT-ATs -- Imperial walkers. Able to manage any terrain and carry a complement of troops, so heavily armored they can shrug off ground-mounted artillery, and equipped with powerful blasters, they’re a threat the rebels are totally unprepared for. Snowspeeder weapons are useless. They’re horribly outmatched and outgunned.

This is one of the things that makes the scene feel so real to me. War isn’t highly organized armies meeting on a field, each perfectly executing their plans. War is chaos, luck, and -- nine times out of 10 -- a mismatch in forces.

The Imperial ground assault annihilates the rebel snowspeeders and lays waste to the defensive line of troops in trenches. Why are there troops in trenches at all? Because they expected those TIE fighters to be providing air support for advancing stormtroopers on foot. But thanks to the AT-ATs, the trenches are a deathtrap for the soldiers manning them and don’t even slow the Empire down.

But then, the rebel forces do what most military strategists consider the hardest feat to pull off: They execute a well-organized retreat without letting it become a rout.

As soon as they spot the AT-ATs, they know they’re outmatched. From the get-go, they realize their only goal is to get the bulk of rebel troops and supplies away to safety. To them, the battle no longer has anything to do with the base at Hoth, the AT-ATs, or the snowspeeders. It’s all about another tactical matchup: the ion cannon versus the Star Destroyer fleet.

The ion cannon can fire into space with enough power to temporarily disable an entire Star Destroyer, which in turn gives the transports just enough of an escape corridor to get away.

But here’s where another strategical mismatch comes into play: The Empire assumed the battle would be only on the ground. There was no rebel fleet in orbit at Hoth, and they didn’t expect ground-based weaponry to attack their fleet directly. So when they spread out their Star Destroyers to create a net, they didn’t bother to address the obvious weakness in their formation. They’ve got plenty of TIE fighters. They could have easily positioned fleets of them between the Destroyers to cover any gaps. But they simply didn’t think it would be a problem.

This is fantastic writing. I absolutely love the small tactical errors, constantly changing situation, and conflicting goals and strategies.

And so, by the time the Imperials breach Echo Base -- the network of caves serving as the main rebel operational center on Hoth -- what could have been a fierce battle turns out to be stormtroopers finding no enemy to fight. Only a few stragglers get left behind, and most of the rebels escape. 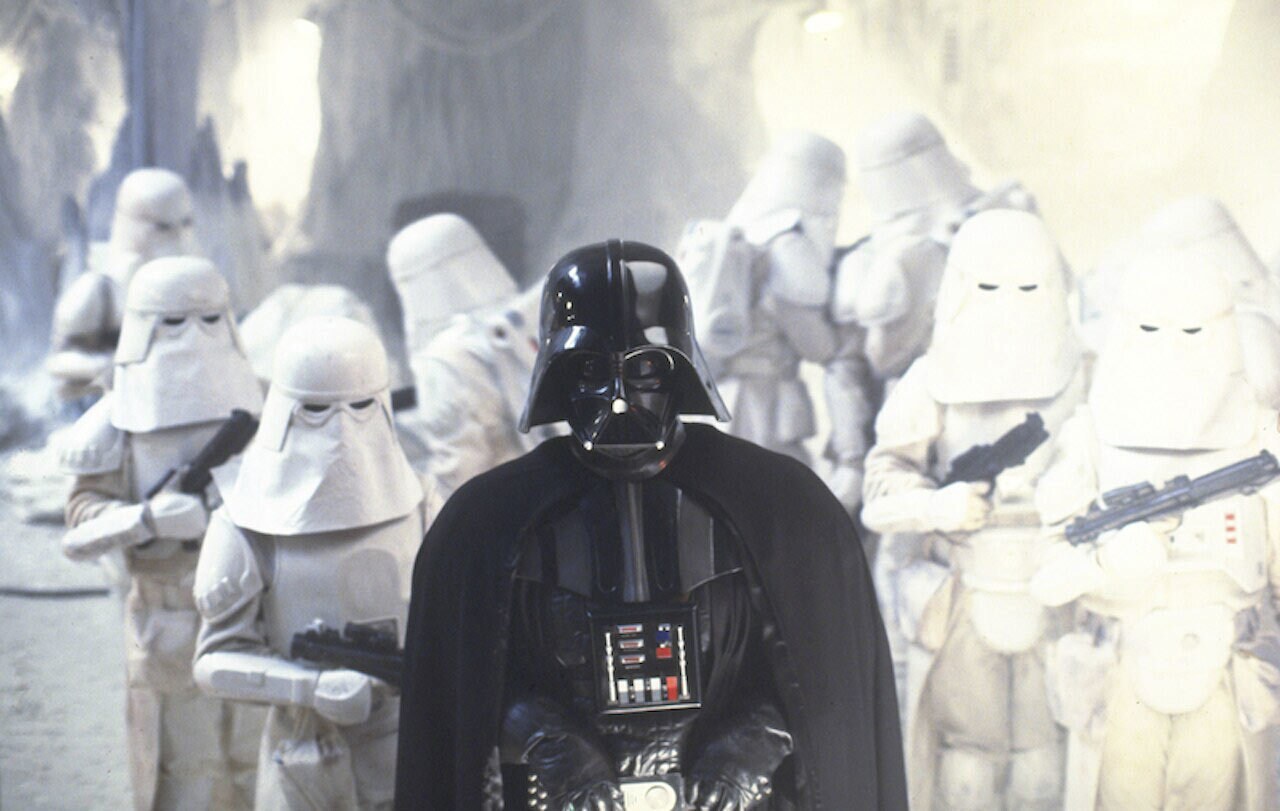 The end result is that the Empire scores a crushing victory on paper, but doesn’t get much out of it. The bulk of the rebel forces get away, along with the Rebellion leaders. The Empire gets no useful intel from Echo Base, and they still have no idea where the rebel fleet is.

This is how you write a battle scene! A series of decisions and mistakes that feel real and logical, taking into account the established strengths and weaknesses of the sci-fi technology and the information each side has available and knows about the other.

And it’s beautiful from a narrative standpoint, too. We’re shown the single greatest defeat of the rebel army of the entire war. But we’re left with a sense of victory and accomplishment because of how desperate the situation is, and how smart our heroes are in getting out of it.

The mere fact that the war wasn’t lost on the spot and the main characters are still alive is, to the audience, a victory. And to make the audience feel like that -- that’s damned good writing.

Andy Weir built a two-decade career as a software engineer until the success of his first published novel, The Martian, allowed him to live out his dream of writing full-time. He is a lifelong space nerd and a devoted hobbyist of such subjects as relativistic physics, orbital mechanics, and the history of manned spaceflight. He also mixes a mean cocktail. He lives in California.