John Morton, a.k.a. Dak from The Empire Strikes Back, leads a discussion on themes of the latest Star Wars film.

Studying Skywalkers is an exclusive column that investigates the characters, themes, and lessons of Star Wars from an educational, literary perspective. In this installment, StarWars.com looks at using The Force Awakens to promote critical thinking.

There are times as an educator when truly amazing moments happen in your classroom. These moments are unforgettable, because you get to witness authentic, viable learning that transcends the ordinary, and delves into the extraordinary. When you can add elements of the Star Wars saga into the mix, in the person of John Morton, then you truly are in for something special. As Star Wars fans know, John Morton is best known for his portrayal of Dak Ralter in The Empire Strikes Back, and he recently made a virtual appearance in my British Literature English classes that we won’t soon forget.

This all came about when I encountered an article John released titled “The Ralter Quaternity.” Once I read the article, I recognized that John had, in essence, created a modern day version of T.S. Eliot's “The Waste Land” using the language and characters of The Force Awakens. While T.S. Eliot is more of an American writer (he moved to London at the age of 25 and renounced his American citizenship at 39), this article felt like acceptable curriculum for a British Literature course, due to the critical thinking that is necessary to interpret and analyze John’s work.

To me, critical thinking involves multi-dimensional thinking, and learning to think beyond the surface of things. It promotes a more thoughtful, more discerning student, and this is a pervasive quality that transcends any class. It is an essential aspect of pedagogy, which illuminates the rhetorical strategies we foster in our students. John’s article was the perfect tool to bring this to the forefront using Star Wars. Anytime you can bring popular culture into the classroom, it creates engagement, which means buy-in for students, and when there is an opportunity to combine engagement and Star Wars, I can’t pass it up!

After making this connection, two things had to happen: I had to reach out to Dak, and make sure all my students had seen The Force Awakens. Both were extremely agreeable prospects that no Star Wars fan would pass up. We had John on Coffee With Kenobi previously, as well as on the podcast stage at Celebration Anaheim, and once we connected again to talk about this idea, he was on board. Those who have had the good fortune to speak with John know he could not be more generous and gracious with his time, and he loved the idea of students creating critical thinking questions based on his article and The Force Awakens. We set up the Skype conversations with my students, and Phase 1 was set. 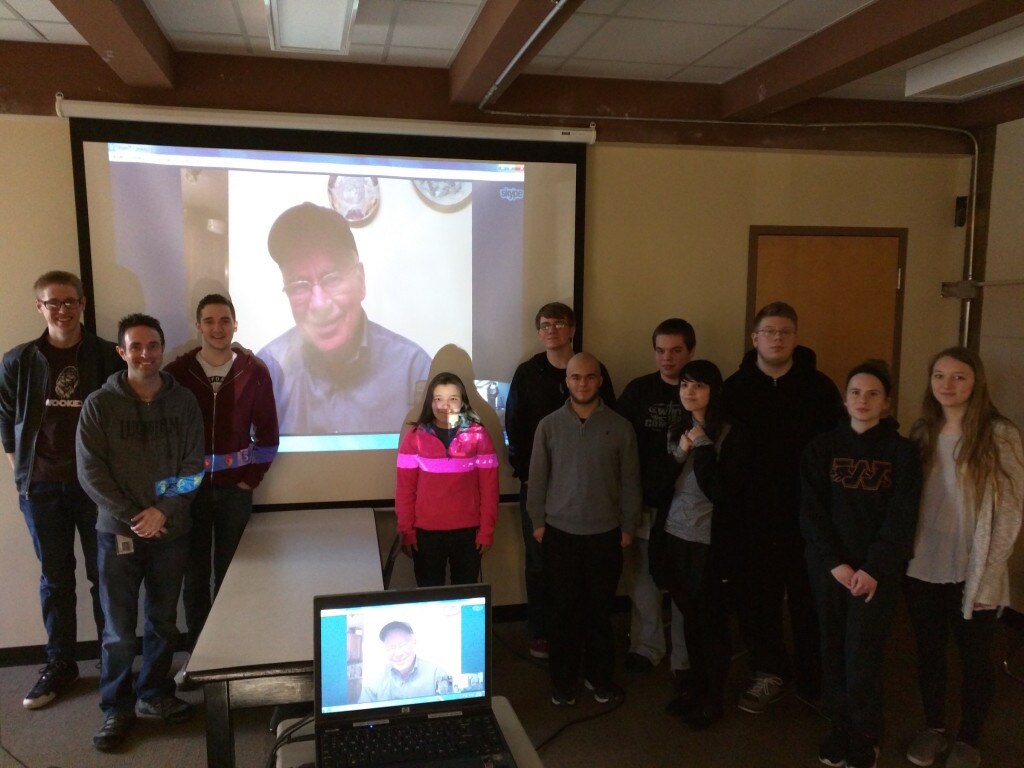 Phase 2 involved taking my students to see The Force Awakens for a field trip, which was naturally met with a lot of enthusiasm. While many had already seen the film, there were some that weren’t, and the experience was spectacular. After seeing the film, students were asked to create critical thinking questions; they were tasked with selecting their favorite, and during the Skype conversation with John, each student got the opportunity to ask Dak his or her critical thinking question. The discussion was inspiring to all of us, as John was an excellent muse, providing insights into the questions, but more importantly, for bringing the discussion back to the students. Here are some of the questions the students created:

Brennan Palmer: During Kylo Ren and Rey’s climactic battle, what does the tearing of the ground between them represent?

Matt Ayers: How is death portrayed in the film and how does it promote life?

Taylor Ray: How is Kylo Ren being a part of the dark side comparable to Anakin?

Christian Deets: After not being prevalent previously, what is there to say about a main character being a woman?

Tyler Coughlin: What was the purpose of showing the First Order in a World War II-like state?

April Hoover: How is dependency shown throughout The Force Awakens, and why is it so significant?

Sam Schoon: Maz Kanata says, “I have seen those eyes before,” to the heroes of The Force Awakens. How do Rey and Finn differ, and how might they both interpret this?

Scott Nichols: Both Rey in The Force Awakens and Luke Skywalker in A New Hope overcome obstacles in order to be the person they want to be. What symbolism is present here?

Kevin Zheng: Explain the significance of Rey handing the lightsaber to Luke.

Miquela Bowers: If Kylo Ren has both light and dark in him, why would he choose the dark side over the light, even though his family is on the light side?

Jarred Fager: How is symbolism shown at the end of the movie with Rey and Luke’s encounter, based on the setting and the character’s themselves?

Hanna Mertens: As seen in the prequels, Order 66 caused the clone army to treat the Jedi as an enemy rather than a friend … Can ties between Order 66 and American society be made?

Lance Heffner: Knowing that the kyber crystals in red lightsabers are artificially made after achieving a certain level of mastery of the dark side of the Force, what is significant about Kylo Ren having a cracked kyber crystal in his lightsaber? The conversation grew, as students asked their questions with confidence, and Dak responded in kind. For instance, Christian’s question about the significance of a woman as the main character in a Star Wars film prompted an immediate discussion about the evolution of women in not only cinema, but in history and culture, as well. The bridge in conversation transitioned to multiple disciplines, thanks to critical thinking and engagement.

Equally fascinating moments resumed; John Walker, Kevin Zheng, and Jarred Fager, among others, were curious to discern the meaning and symbolism of the passing of the lightsaber from one generation to the next. John was not quite sure how to respond, to which Sam Schoon explained that it was like King Arthur and Excalibur, to a degree. She even went so far as to say that when Luke’s lightsaber speeds past Kylo Ren and into Rey’s outstretched hand, it was not unlike the legacy of Excalibur. When asked to explain, Sam mentioned that just as King Arthur was the only one worthy of pulling the sword from the stone, so to was Kylo Ren not worthy of Luke’s lightsaber. The weapon, in essence, chooses Rey, showing her worth and importance. Dak was impressed, as was the class. Yet again, looking beyond the surface led to poignant thought and reflection.

Both class periods were full of powerful moments, with the students, Dak, and myself impressed by the amount of thought put into an analysis of The Force Awakens. I could not have been more proud of them. Truly wonderful, the mind of a child is, and these burgeoning critical thinkers did not disappoint. They took the skills we have worked on all semester, and demonstrated growth and insight. John was also impressed. I asked him to share some of his observations of the experience.

Star Wars.com: How do critical thinking and Star Wars make sense as a teaching tool?

John "Dak" Morton: Makes great sense, because students are already engaged by Star Wars. The movies generate those questions, and even in the younger children -- both boys and girls now -- their play incorporates storytelling, heroes and villains, with the action figures and such. And don't forget, the whole Joseph Campbell "hero's journey" aspect is embedded in Star Wars. So we have these archetypes in our collective unconscious that Star Wars manifests and almost automatically directs their imaginings and enquiry into right and wrong, life meaning and learning.

Star Wars.com: What were your impressions of the students' questions during the Skype conversation?

Dak: I was struck particularly by the questions I couldn't answer. That's why I bounced them back to the students who asked them, because obviously they had the answers themselves and wanted to talk about them. And what it did was reveal what Star Wars had inspired in them, inspired them to think about. And that really is the key. Because that sort of inspiration often provides a student with a life-path, a quest that he or she wants to pursue that could be chemistry, physics, film, writing, whatever. I mean, that's what education is all about, isn't it? Awakening a spirit of enquiry and giving students the basic tools for their life-pursuits. Truly, John is a gentleman and a scholar, and I am delighted that my amazing students got this experience. It is my hope that using critical thinking and Star Wars continues to promote lifelong learners who continue to use their gifts to not only explore that galaxy far, far away, but to keep fostering critical thinking skills into the next phase of their lives.