New concept art, with insights from the artist, puts a face to the everyday hero from Cavan Scott's novel, The Rising Storm.

Rhil Dairo is no ordinary reporter. Her dedication to recording intel to set the record straight inspired her to get a cybernetic implant to stay connected to her faithful droid T-9. On assignment to cover the Republic Fair on Valo, standing shoulder-to-shoulder with the likes of Jedi Council member Stellan Gios and Chancellor Lina Soh, she turned a fluff piece for GoNet into compelling firsthand coverage of the devastation that followed.

"I’ve always been fascinated how news would work in a galaxy, far far away, from the state-controlled broadcasts of the Empire to a more open news service in the times of the Republic," says author Cavan Scott, who first introduced the character in his novel, Star Wars: The High Republic: The Rising Storm. "An event like the Republic Fair gave me the chance to explore that more fully. As one of Lina Soh’s Great Works, the Fair would have obviously been a media circus and it also gave me a chance to look at how the public view the Jedi at this point in galactic history, including, of course, the High Council’s poster boy Stellan Gios."

StarWars.com is thrilled to share the first look at concept art of the character from Scott's best-selling novel, part of the second wave of stories in Phase I of Star Wars: The High Republic. 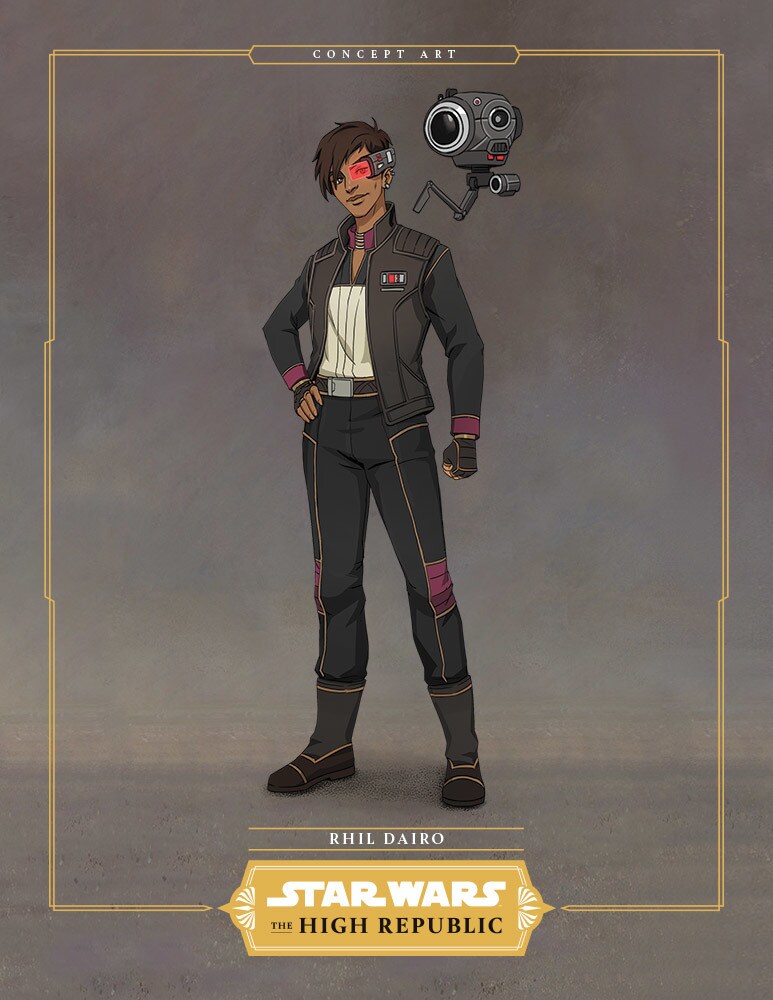 Scott had a clear vision in mind while writing the news writer. "Rhil is a no-nonsense reporter, who wants to cut through fluff-pieces to get to the real story," Scott says. "And most importantly she cares deeply not just about the events she’s covering, but the people caught up in the madness of the Nihil attack on Valo."

To create Dairo's utiliarian look, artist MinJi Yoon was influenced by another cybernetically-enhanced Star Wars hero: Lobot from Star Wars: The Empire Strikes Back. "When designing Rhil, I gave her highly functional outfits so she's able to move around in the field with ease, then added some of the more decorative High Republic-era elements in the trim of her vest, pants, and belt," Yoon says. "Her cybernetic implant is inspired by Lobot's from the original trilogy but with a screen that can project over her eye when needed."

For Dairo's ever-present droid, an extension of everything she sees, Yoon looked to Earth-bound tech for inspiration. "For VT-9, I referenced parts of old video camcorders like the large lens and recording light, which were combined with the tech of existing Star Wars droids."

In fact, Star Wars itself has been an influence on Yoon since she was a child and the prequel films were an integral part of her decision to pursue a career in illustration. "I watched the prequel trilogy so many times with my brother when we were kids and then decided to pursue concept art because of the artwork for those films," she says. Still, she couldn't have imagined that she'd ever be working on characters from the galaxy far, far away. "I never thought I'd actually get to contribute to the world of Star Wars," she admits, "so the opportunity to design for the High Republic is a childhood dream come true!"