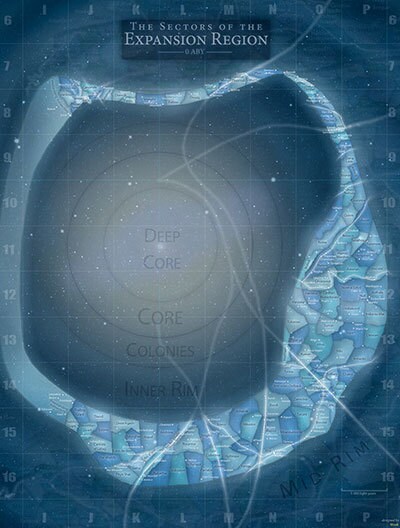 In August 2009, a book I had dreamed of became a reality.

The book was Star Wars: The Essential Atlas, which I’d worked on over a couple of years with my friend and co-writer Dan Wallace. But the dream was much older than that -- in fact, it dated back to the early 1980s, when I was a Star Wars-obsessed tween.

One night back then, I dreamed I was in a bookstore and there, on the shelf in front of me, I found the book I’d wanted since the summer of 1977 -- an atlas of the Star Wars galaxy. It had tons of information about how the galaxy worked and beautiful, brightly colored maps, and I could tell from flipping through it that I’d spend hours and hours drinking it all in.

I woke up and blinked happily at the ceiling, inventorying the day to come. Sure, I thought, there was school and sports and homework, but when those things were done I’d be free to read my new atlas, the one I’d bought yesterday, with all the cool maps showing how the Millennium Falcon got from Tatooine to Alderaan and from there to…

Oh no, I realized. There isn’t really such a thing. It was just a dream.

And for nearly three decades, that was true -- until Dan and I convinced Lucasfilm and Del Rey to let us turn our shared obsession with Star Wars geography into a book.

The Essential Atlas used geography as a starting point for examining every aspect of the galaxy far, far away, from its demographics, government, and politics to its military tactics, communications, and common values. And, of course, Dan and I looked at how geography had shaped the galaxy’s history, from early exploration and settlement patterns to wars between empires old and new. We offered closer looks at the regions of the galaxy, from the cosmopolitan Core Worlds to the wild and woolly Outer Rim. We detailed planets from urban Coruscant to desolate Tund. We charted hyperspace routes over millennia, traced the rise and fall of empires, and helped produce dozens of maps that illustrated everything from the events of the movies to the secret domains of the Hutts and Chiss. We mapped sectors and population densities and invasions, described ancient wonders, and even wrote a spectator's notes for an opera.

The Essential Atlas was equal parts enormous work and enormous fun. But as our punch lists shrank and the daily changes to our massive manuscript dwindled, two of our goals remained stubbornly elusive.

The first goal was to map all the sectors of the civilized galaxy: the 1,024 of the prequel-era Republic plus those added by the expansionist Empire. I tackled this project in the final weeks of work on the book, hoping to add sector boundaries to the region maps produced by our master cartographer, Modi. But figuring out sector boundaries for the Outer Rim Territories alone left me exhausted and shell-shocked -- and I knew that region would be far and away the simplest of the galaxy’s six major regions to map. So for the sake of everybody’s sanity, that goal was quietly abandoned.

The second goal? It was to create an appendix of every star system created for the Star Wars galaxy, whether it was for the movies, the Clone Wars TV shows, a novel, a comic, a video game, a choose-your-own-adventure book or anything else. Dan and I wanted to list each system, say what region of the galaxy it was found in, and provide grid coordinates so you could fix it on The Essential Atlas’s main galaxy map.

This idea came as a surprise to our long-suffering, normally unflappable editor Erich Schoeneweiss. Erich asked how many systems I had in mind for this appendix, wariness practically dripping from his email, and I responded, “All of them.” Apparently still calm, Erich asked how many “all of them” was, and I blithely replied that it was a mere 4,387. To his considerable credit, Erich neither quit on the spot nor contacted someone to get his authors psychiatric care. To his even more considerable credit, he and designer Brad Foltz figured out how to fit all those systems into just 14 pages.

It was a huge victory -- but inevitably a temporary one.

The wonderful thing about books is you can hold them in your hands. They’re beautiful objects in their own right, with physical properties appreciated by bibliophiles: the heft of the book, the feel of the paper, even the sound made by riffling pages. (Plus they don’t crash, and nobody yells at you if you read them below cruising altitude.) The downside of books, though, is that creating these beautiful physical objects takes a long time. It wasn’t anybody’s fault, but The Essential Atlas’ appendix was static -- it couldn’t keep up with the new Star Wars tales being told.

But StarWars.com could. The kindness of the folks at Lucasfilm allowed Dan and me to make The Essential Atlas a living book, supplementing the big, beautiful physical book we’d produced with online material that could change and keep up with that galaxy far, far away. Our first effort was to create an online version of the appendix, in which we could add new star systems dreamed up by authors since our manuscript locked for production. Our next project was to work with Modi on that map of the Outer Rim’s sectors. Both goals were within our grasp after all.

The Essential Atlas has now passed its third birthday, and Dan and I are always grateful to hear a fellow Star Wars author or like-minded fan tell us that we’ve created a valuable resource. And when the premiere episode of Season Five of The Clone Wars noted that Florrum was in the Sertar sector, you better believe this author did an impromptu dance around his living room.

But Dan and I have also worked to keep The Essential Atlas a living book. The online appendix continues to grow: We’ve added new systems from The Clone Wars, novels, games and comics, as well as older systems eagle-eyed readers discovered we’d missed here and there. And region by region, we’ve worked with Modi to keep mapping those sectors, moving slowly but surely towards the galaxy’s heart.

You’ll find the latest version of the appendix online -- we’re now up to 4,934 star systems. You’ll find a new map of the sectors of the Expansion Region -- that makes three regions mapped, with four to go. And you’ll find more maps, projects and discussion on The Essential Atlas’ dedicated page.

I can’t tell you how many of our book’s birthdays we’ll have celebrated when we announce that the sectors of the Core Worlds and the Deep Core have been mapped. And I can’t certainly predict the number of star systems that iteration of the online appendix will contain. But we’ll keep working, and we’ll get there. And in the meantime, when some Star Wars-obsessed kid wants to know how to get from Tatooine to Alderaan, we’ll have an answer for her, both in bookstores and online. And that answer will still be there when she wakes up.

Jason Fry is the co-author of The Essential Atlas and the author of more than a dozen other Star Wars books, including The Essential Guide to Warfare, The Clone Wars Character Encyclopedia, and the forthcoming Darth Maul: Shadow Conspiracy. Visit him at jasonfry.net.