The comedian and star/co-creator of Rescue Me and the Lucasfilm Animation executive producer discuss hockey and heroes in honor of May the 4th – both Star Wars Day and International Firefighters' Day.

The deepest commitment. The most serious mind. The discipline to train. And the selflessness to leap into the fray, running toward the battle while others are turning away.

In honor of Star Wars Day, we’re celebrating not only the heroes of the saga — the fearless Jedi, who nobly devote their lives to upholding peace in the galaxy — but extending our admiration to some real-life heroes on May the 4th, which is also International Firefighters' Day.

To mark the occasion, Dave Filoni, executive producer of Lucasfilm Animation, and comedian Denis Leary, who is also a passionate advocate for firefighters and the founder of the Leary Firefighters Foundation, recently sat down by phone to discuss their shared love of hockey — Leary is a Boston Bruins fans, Filoni favors the Pittsburgh Penguins, — the way Star Wars helps inspire real heroes, and Leary’s love for that scoundrel Han Solo. 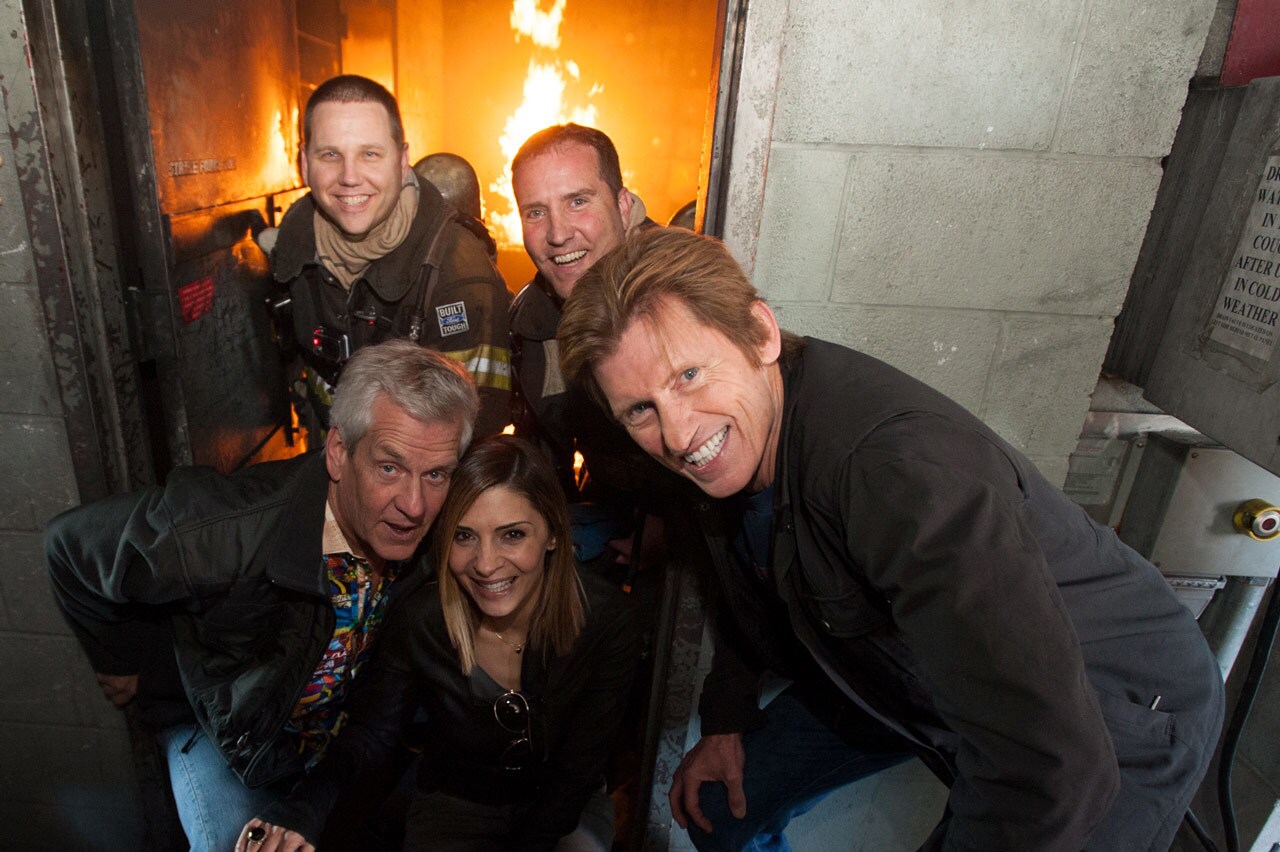 StarWars.com: Before we even start in with the interview, can you just tell us a little bit about your foundation?

Denis Leary:  Yes, so, what the Leary Firefighters Foundation does, we’ve been in business now since 2000. My cousin Jerry Lucey was a firefighter in Worcester, Mass[achusetts], which is my hometown. And he died in the line of duty in a pretty famous fire in the fire service, the Worcester Cold Storage and Warehouse Fire, along with five other men in December 1999. We started out helping the Worcester Fire Department and those firefighters and their families that were left behind after that event. And we quickly expanded into New York after 9/11 because one of my oldest friends had become a firefighter in New York when we were much younger and, you know, it’s a tribute to the brotherhood of that job that when they were looking through the rubble for the bodies up in Worcester, one of the first groups that came from out of town was the FDNY, including a couple of friends of mine. 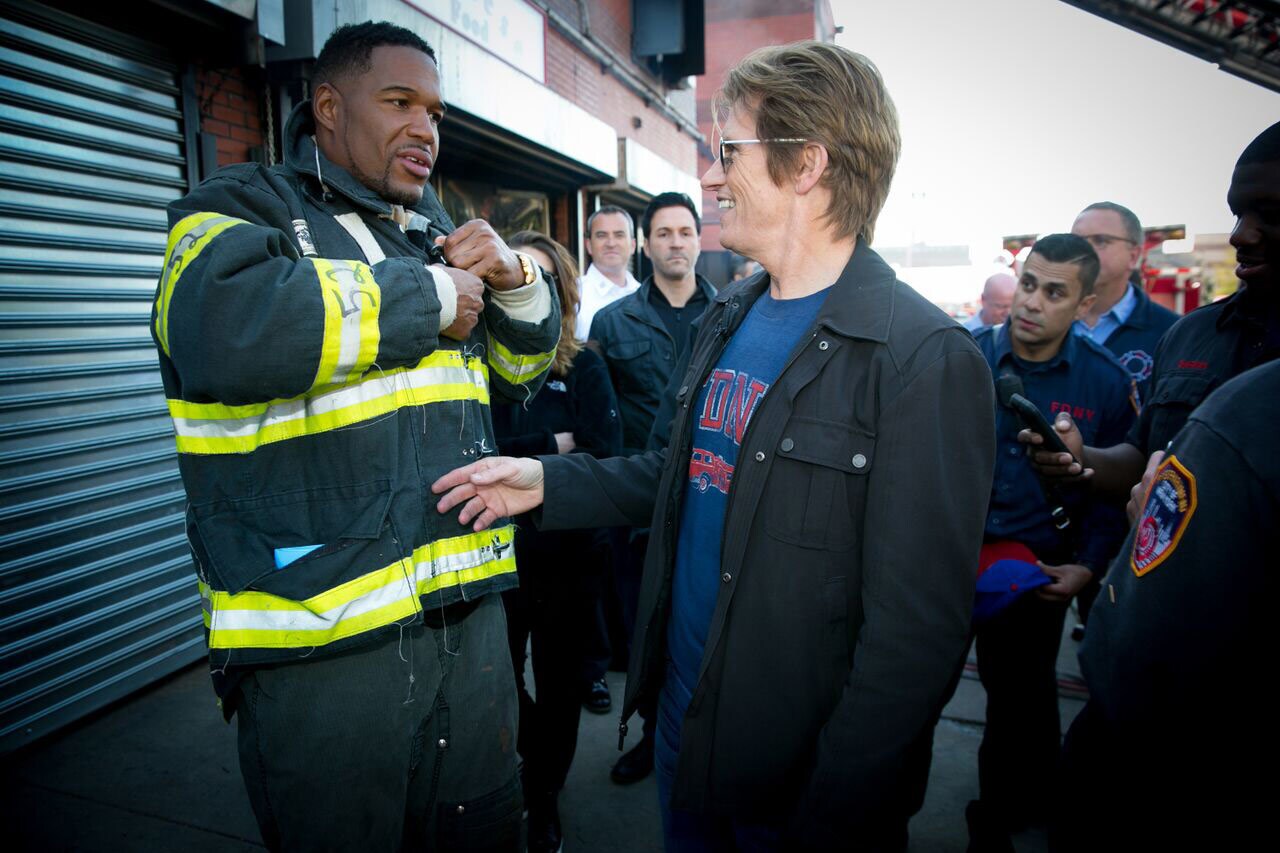 We also help training facilities for fire departments all over the country and we also help families of members who died in the line of duty. It just sorta took on a life of its own.

May 4 is International Firefighters' Day, but nobody really knows that so we decided to take that day and use it to let people know, yeah there is a day for firefighters and on that day you can donate to this cause to help departments all over the country, including nominating your own local department to get a grant from my foundation and the FDNY.

We built our event, the Denis Leary FDNY Challenge, which is what we do on May 4 every year. It’s a chance for corporate donors and private citizens to donate to the cause and come down. And we say, you know, we can be heroes. You come down, put on bunker gear, side by side with real New York City firefighters, and you spend the day going through all their training maneuvers. It’s hands-on, a lot of fun, it’s very active, and, you know, in the midst of that day, having a good time together, we’re celebrating leadership and brotherhood and trying to help departments all over the country. Last year was our first version of this event and one of the women who signed up and went through the maneuvers and had a great time, she actually decided to leave her job and take the test to become a firefighter!

Dave Filoni: I live in Santa Rosa [California] and we had a huge fire last year. My wife and I were evacuated from our house for a week. Just seeing how the firefighters and first responders mobilized – it was incredible. I would drive back to check on my house and see fire trucks from all over, even out of state. Their tireless effort and incredible organization was awe-inspiring. They protected our communities from the fires and looters who were trying to take advantage of a terrible situation.

My friend Emily was an EMT and decided firefighting was something she wanted to do. Knowing someone that was immediately pressed into service was really something. I was watching the news and a man said his home was saved because this woman Emily and 3 other firefighters came out of the woods and dug a trench around his house.

It just becomes so personal so quickly. Our fire was over 6 months ago, but I still see signs up around town thanking them. No one in our community would have a home without their efforts.

Denis Leary:  We run out of the building or get in our cars and go. Meanwhile, the people who do this job for a living are running into the wildfire or into the burning building. The pure courage of it is astonishing. There’s such an honor to what they do. They are just trying to come and save you or your house or your loved ones. That’s the part that always amazes me.

Dave Filoni: This is such a Jedi thing.

Denis Leary: It really is.

Dave Filoni: There are so many parallels - the selfless nature - putting themselves in harm’s way to protect people they don’t know, saving their property and animals – it’s all part of who they are.

This is reminding me that there are actually firefighters in Revenge of the Sith.

Denis Leary: I’ll do you one better. There was a guy I knew up in Massachusetts. We were talking about a fire in a three decker apartment building. And when those things go up, they just go up because they’re made out of wood. And he had done a couple remarkable rescues and he was also a Star Wars fan. And I asked him, ‘Geez, man, what’re you thinking when you’re running into something like that?’ And he’s like, ‘Jedi, man. Jedi mind trick.’

George [Lucas] has a fire department on Skywalker Ranch that supports the local area all the time. I have friends who live out there and they were saying that there would be no chance for engines from the next city to reach them in time if a wildfire were to break out.

[Dave is told he’s being called away to another meeting]

We haven’t even gotten to Coach’s Corner! Well I’ll tell you one thing, your Bruins are looking good. If it’s not my Penguins, they’re my pick out of the east. The year you won the (Stanley) Cup, I painted one of the clone’s helmets in our TV series Star Wars: The Clone Wars to look like Gerry Cheevers’ mask. I thought, ‘If a kid sees that clone and wonders what those markings mean, then they’ll look up that mask and they’ll learn about Gerry Cheevers.’

Denis Leary:  Wait, I want to give you guys one more Star Wars connection and it just so happens that the guy is my favorite Star Wars character of all time and also one of my favorite movie stars.

Okay so, my favorite Star Wars character of all time was Han Solo. Huge Harrison Ford fan. Never met the guy. And when we did our first event, after 9/11, it was about a month and a half after that that we did our first fundraising event in New York specifically for the families of the firefighters that died that day. I was organizing that event and trying to get as many people as I could to come and somebody called me and said, ‘Harrison Ford is a huge admirer of firefighters and specifically the FDNY and he wants to come.’ And I said, ‘Well, he’s welcome to come!’ And he wanted to come and he wanted to speak. So then Harrison Ford comes and I’m meeting Han Solo on the red carpet. We walk inside and he says, ‘What do you want me to do?’ And I said, ‘What do you want to do?’ And he said, ‘Well, I want to introduce you.’ Because I had to speak and start the whole thing and I said, ‘Whatever you want, man!’ So Han Solo goes up on stage and introduces me and, I mean, that’s already a show business highlight! That event was probably four hours long. We didn’t really expect all the celebrities to stay the whole time, but he stayed and he took pictures with every firefighter.

StarWars.com: This has been such a delight! It’s been so much fun!

Dave Filoni: Yeah, man, it’s been so fun talking to you. Thank you for everything you are doing to support firefighters!

Denis Leary: If we end up playing you in the Eastern Conference Championship, we’re gonna have to talk at some point.

Dave Filoni: Absolutely! You got it. We can even settle it out on the ice!