Welcome to the Resistance: Meet Suzie McGrath, the Voice of Tam

The actor tells StarWars.com how she found her place as the scrappy mechanic and why the Colossus feels like home.

When Suzie McGrath first read the description for Tam Ryvora, a tough and dedicated mechanic who dreams of becoming a pilot in Star Wars Resistance, there was something familiar and wholly relatable about the feisty young woman. “I felt very connected to her,” says McGrath, who makes her voice-acting debut in the new anime-inspired animated series. “And what I loved… there really wasn’t any restraint. When you audition sometimes they’ll give you all these things you need to hit, an accent and all these things.” In this case, it was up to McGrath. “For me as an actor it was really freeing because I was able to read all these things about this person and then just completely invent her as what I think she is.”

The Tam we meet on the Colossus platform, itself a melting pot that makes McGrath feel as at home as if the Essex-born actor were back in the east end of London, became a scrappy pseudo-big sister to the rest of Team Fireball.

By the time McGrath saw the fruits of her labor, she says it was like having a child. “It’s like your baby,” she says. “You’ve been nurturing it for several months and not knowing how it comes together.” Showrunners sent her a sneak peek at the finished pilot episode, but McGrath couldn’t bring herself to watch right away. “I actually had to wait because I was quite nervous,” she says. “Hoping that she looks good and hoping the voice sounds good with the character, and really seeing this character that you’ve gotten to know via script and via paper, then to see it come to life. There’s a little softening in the heart where you’re like, ‘This is my baby!’” 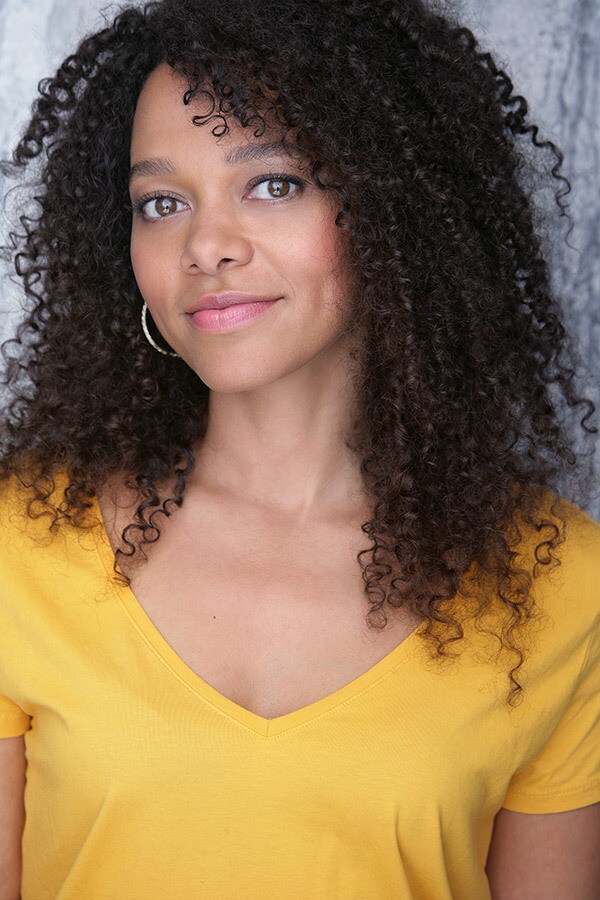 And she’s so pleased by the way the character has turned out. Tam does not suffer fools. She’s a diligent, hardworker who has aspirations of becoming a racer in her own right. And she has zero problems with speaking her mind. “I love that because I do have a filter, so I love people that are OK with just speaking their mind,” McGrath says. “She’s so cute! You spend so long kind of imagining how the voice is going to be put to the character, what’s it going to look like? And getting to see the finished product, it’s very gratifying…. She’s like this little tiny spitfire of a person. She’s fun. She’s fun to play.”

McGrath recently sat down with StarWars.com to talk about the joy of playing Tam, translating her theatrical experience to the recording booth, and how her upbringing in greater London helped prepare her for the role. “There’s an element of a young urban, Londoner,” she says. “There’s definitely people like Tam on the streets of London today.”

Of course, for at least a year after landing the part, McGrath had to keep everything she knew about the show and her character under wraps.

“I’m good with secrets,” she confides. “My agent, from the moment she called to tell me that I booked it, she was like you can’t tell a soul.…It’s fun. To me it was a fun experience to keep something to myself.” But sometimes she wanted to shout it from the rooftops. “It’s like giving candy to a baby and then taking it away.” 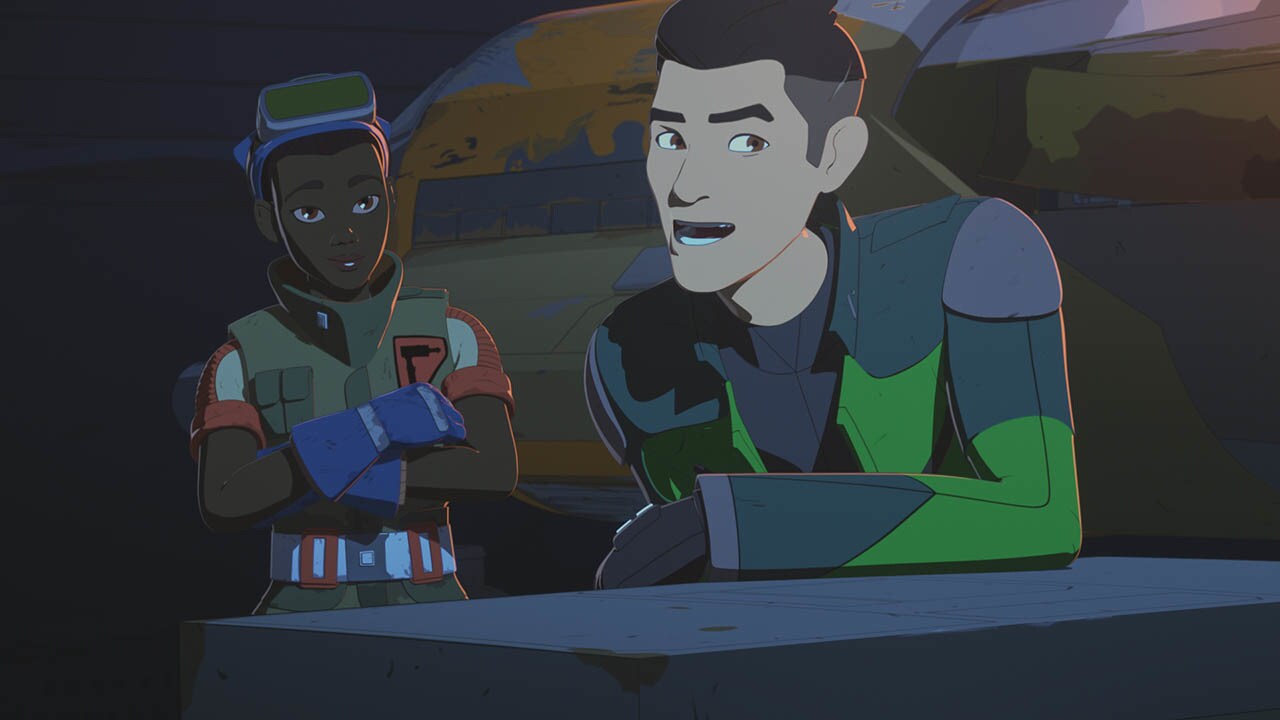 The 35-year-old Los Angeles-based actor bonded with co-star Christopher Sean, who voices Kaz, right away. The two both worked in soap operas previously, where the production schedule keeps a hectic pace. McGrath is best known for a turn as Keisha on EastEnders, the long-running UK TV series, and had also worked in theatre, including studies in stage combat.

Recording for the role of Tam is completely new experience, she says. “I’m quite an expressive performer anyway, and I come from a theatre background. Sometimes when she’s watching the animation for Tam, she catches a glimpse of herself.  “I had always hoped that my expressions would help convey certain emotions and maybe help them animate it….Some of the expressions in the eyes, I can kind of see a likeness.”

Unlike her stage roles, standing before the mic calls for remaining in a rather confined space and keeping extraneous noise to a minimum. That means the physicality of the role has to come across through the inflection in her voice. McGrath still draws on her studies of Stanislavski and method acting. “You always start at that point of really feeling as best you can like the character, what are they going through, how are they actually feeling, and we just work from there....To me, you’re still telling a story whether that be with your voice or with your body or on screen."

And she’s surrounded by a welcoming ensemble cast of co-stars. “When I come back and spend time with them and work with them, I’m on top of the world because they’re so much fun to work with. They’re so funny,” she says.  “Christopher Sean is one of the sweetest people, and he’s so encouraging. I think he’s a bit of a charmer, so he always gives everyone compliments and he’s encouraging people…They are like family.” 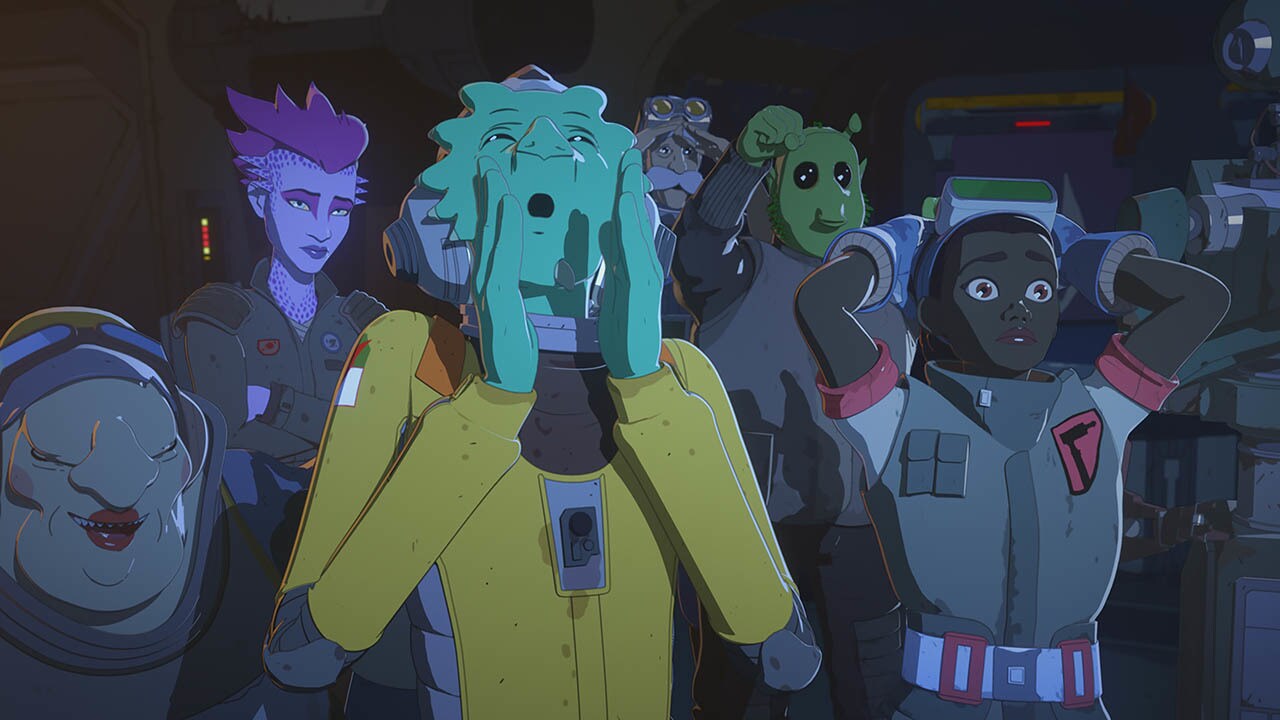 On screen, Tam developed into an adopted big sister of sorts, shepherding the adorably naïve Neeku and immediately butting heads with Kaz after his disruptive arrival.

“With Kaz, it’s a rocky road in the beginning,” McGrath says. “I feel like because he’s directly stepping on her toes, everything that he does kind of threatens her progression, right? He uses her ship, it’s not necessarily her ship but it’s kind of been promised to her. She’s trying to go forward and keep working toward her ambition yet here comes this guy…he’s using her ship, and breaking the ship, and all the work she’s putting in he undoes. But she starts to understand him a little bit more and they do start to get along and it is in the same type of sibling kind of way.”

McGrath sees Tam as a rule follower with a clear moral compass whose tough exterior is protecting “a soft and gooey” inside. “She’s feisty. And I do love that about her.” 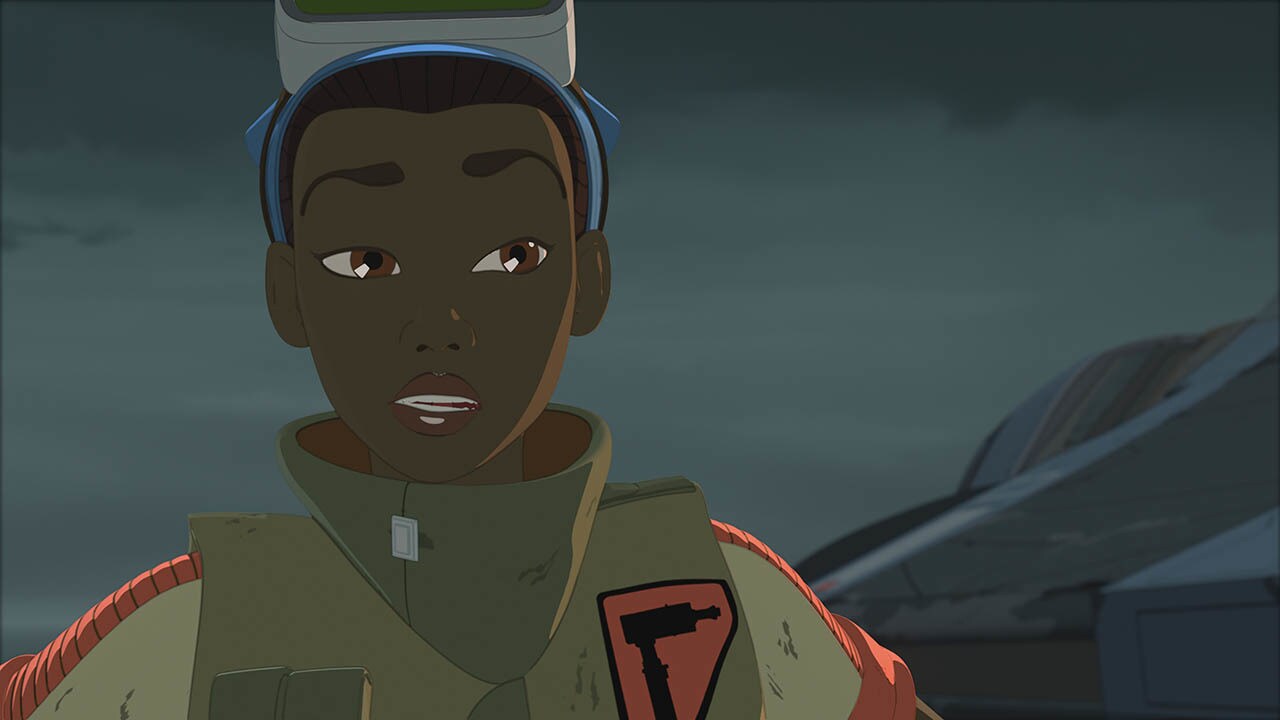 As the series progresses, Tam gets to show more of that emotional side, McGrath hints. "We really get to see why she is the way that she is, why she puts on the tough exterior, and it’s lovely because you do get to see that vulnerability, which is the thing that made me care about her so much so quickly.”

So much of the magic of the character comes down to the atmosphere inside the recording studio. From day one, the core cast has acted out scenes together in one room. “I think it’s everything. I enjoy going in on my own, it’s fine, but the group is the closest that it could possibly be because you’re hearing everybody’s characters, you’ve got the momentum."

As a child, McGrath gravitated toward the look of Star Wars on film, from the other-worldly costumes to the far-flung planets. “It was nothing like any of the other things I would see.”

Landing the gig on Star Wars Resistance has only made her more of a fan. Now McGrath, who counts the formidable Ahsoka Tano among her Star Wars favorite characters,  has made it her mission to go back and learn everything she can about the galaxy far, far away through watching the other animated series and more. “It’s a tall order, but I think it’s your duty … if I’m in this world then I should know all about it. There’s so much to keep up with and there’s so many ways that you can find out about things, whether you’re watching the movies, the animation,” or combing the internet. “It’s become one of my hobbies now." 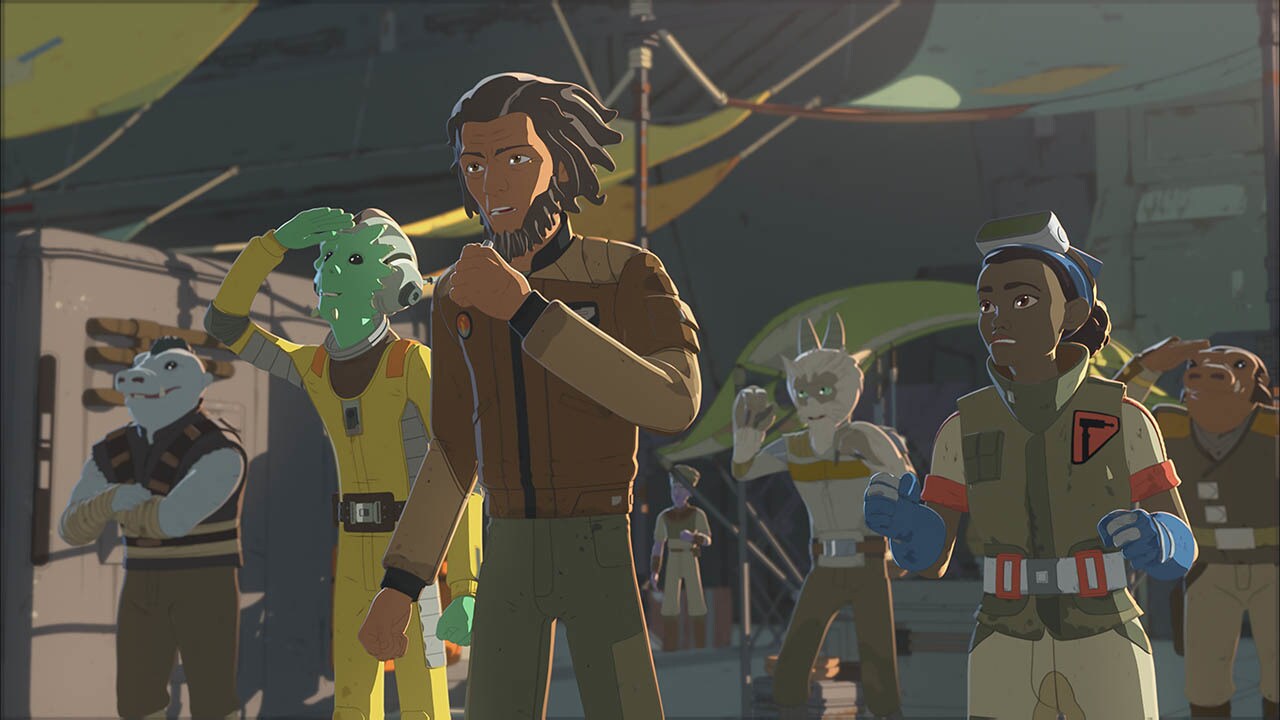 And she can’t wait to share the new adventures with her nephew, her godchildren, cousins, and other family members. The diverse cast of characters and aliens feels at once new and foreign and somehow like home, she says, likening the marketplace on the Colossus to the linen shop her family used to run in England. “It is quite a personal experience for me,” she says. “It’s a really kind of fun and weird kind of environment and I feel like some of the market scenes on the platform remind of that…a bustling place where people are everywhere.”

She hopes the diverse denizens of the Colossus will make the next generation of fans feel even more at home in the galaxy. “I think it can only makes things better,” she says. “Because we can understand each other better when we have examples of diversity so I think it is really important. The most natural thing for humans is to want to relate to something.”

And the sense of humor, from errant darts to the throwing and the falling seen in the extended sneak peek, adds a timeless charm that’s fun for all ages. “These are classic things that never get old,” McGrath says.

The one-hour series premiere of Star Wars Resistance will make its debut on October 7 on Disney Channel (10 p.m. ET/PT) and DisneyNOW. Two additional new episodes will be available via the DisneyNOW app and Disney Channel VOD earlier the same day.