Welcome to the Resistance: Meet Josh Brener, the Voice of Neeku

The actor tells StarWars.com about embodying the lovable dorkiness of the Nikto sidekick and why we have Sabine Wren to thank for it.

Neeku, the adorably literal and naïve Nikto on Team Fireball, is a beacon of light and hope in Star Wars Resistance. His powers are so great, even the actor giving him life in the sound recording booth can’t help but be swayed by his optimistic charm. 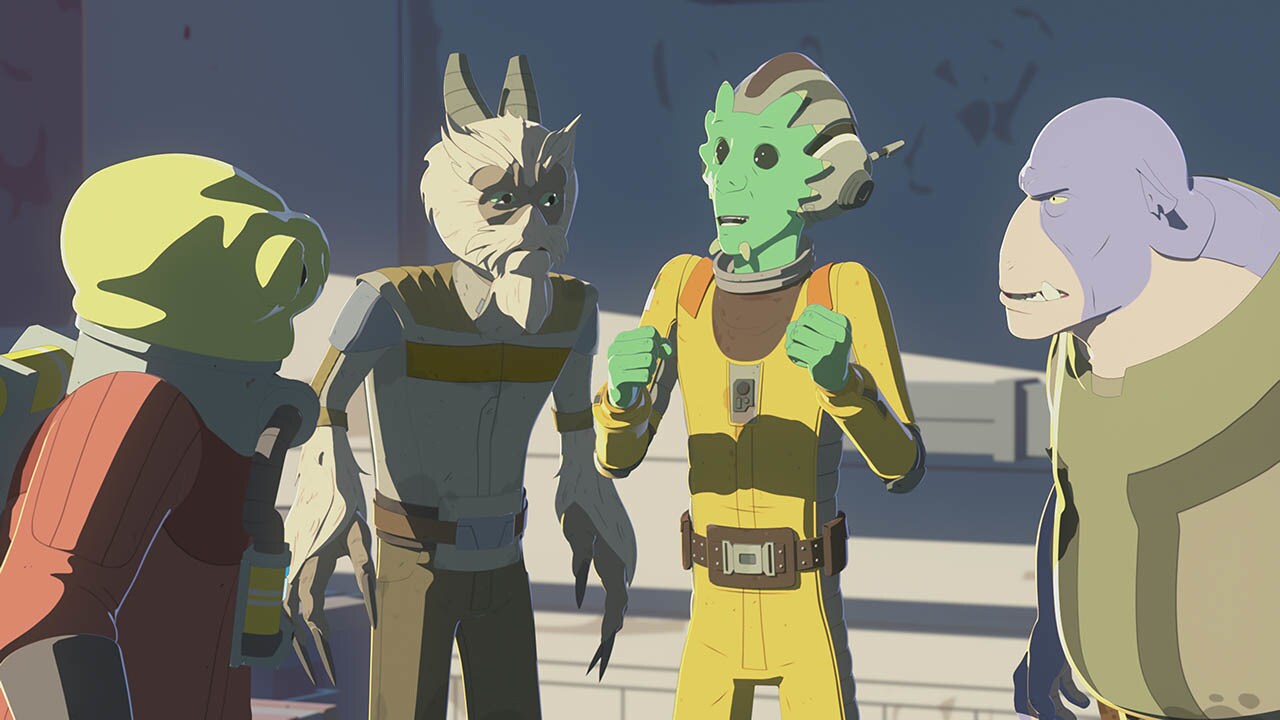 “I find that even if I’m having a bad day and I get to come in and be Neeku for a little while it immediately puts me in a better mood,” says Josh Brener. “He’s just a force of positivity and lovable dorkiness.”

Brener, who counts the voice of Sabine Wren, Tiya Sircar, among his real-life closest friends, has been a Star Wars fan as long as he can remember. And thanks to a nudge from Sircar, Brener previously appeared in Star Wars Rebels as the voice of Erskin Semaj, a senatorial attaché to Mon Mothma.

In his latest role, Brener voices Neeku Vozo, the charmingly loyal and unfailingly hopeful mechanic on the Colossus platform whose excitement over first meeting Kazuda Xiono causes quite a stir in the show’s pilot episode. “He definitely lacks the sarcasm bone, so he cannot detect irony, which makes for some good comedy,” Brener says. 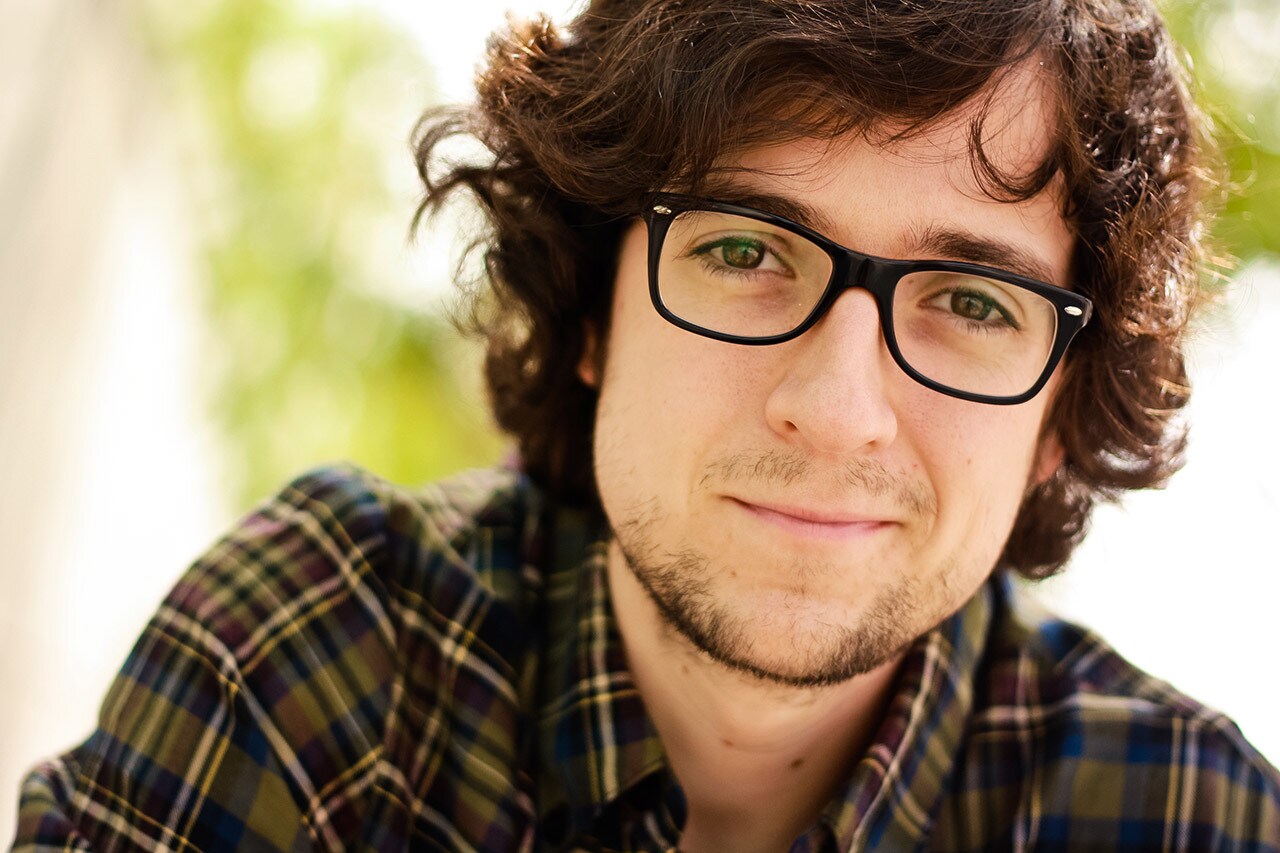 In just a few short clips and trailers, fans have already responded to Neeku’s overt optimism and goofy charm. Brener recently spoke to StarWars.com about his love of the Force, the importance of mentors, and why he can never stop thanking Sircar for setting him on the path to Neeku.

From the moment he stepped into the Star Wars universe as the voice of Erskin, Brener knew he was fulfilling a childhood dream. The role was relatively small, just a few lines in a handful of episodes, but nonetheless important both to the story and Brener as a fan. Brener remembers downplaying the role to a friend. “He looked me in the eye and said, ‘You’re in the universe.’ And we both just screamed like children.”

For months after landing the role of Neeku, Brener had to keep his new gig under wraps. “It has definitely been tough to keep this one quiet because not only am I a huge Star Wars nerd, all of my friends are,” he says. “Going to record and talking about the First Order and General Organa and all of these exciting things and then pretending it didn’t happen was very challenging. I’m psyched that it’s out in the open and I can let my Star Wars nerd flag fly.” 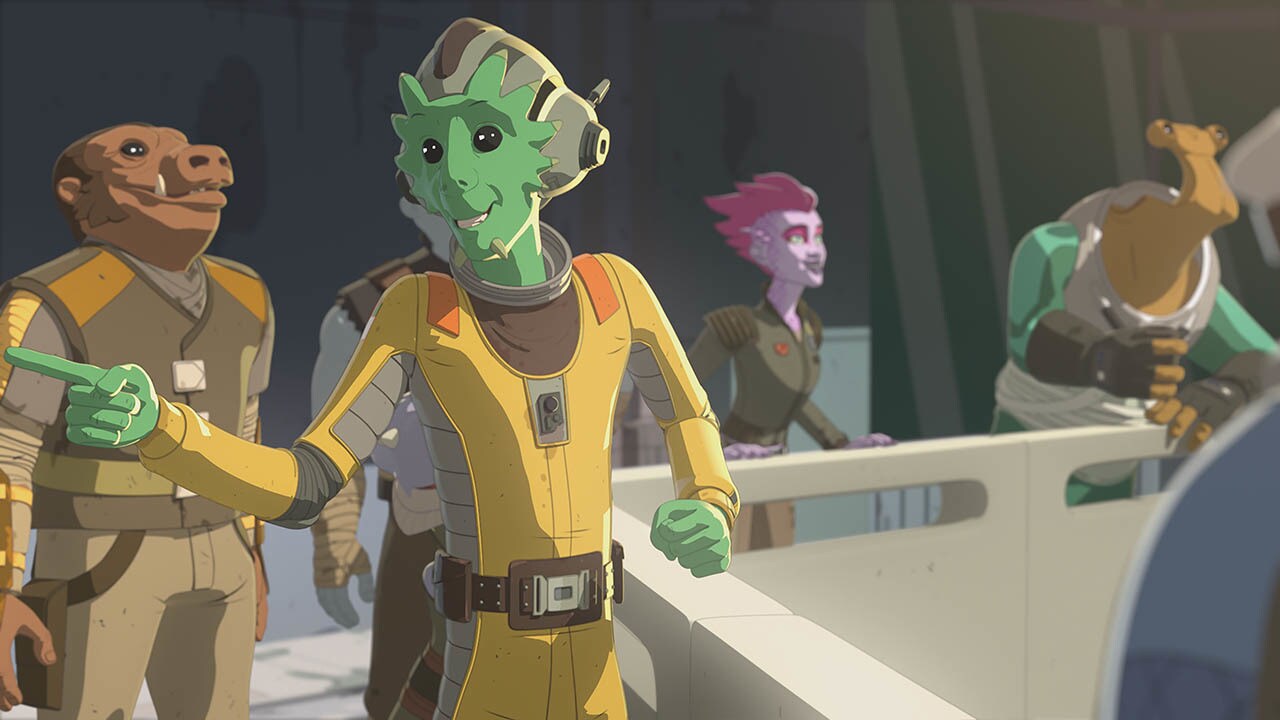 Neeku has quickly become a fan favorite. He’s funny (sometimes unintentionally so) but has a good heart. “He is such a happy guy,” Brener says, calling him “the character that I’m lucky enough to voice.” During the audition, Brener was struck by how his deeply sweet nature can sometimes lead other characters to frustration. “There was this scene where Kaz was asking him for a tool and Neeku wasn’t sure what tool he wants so he just keeps on offering,” Brener says before breaking into Neeku’s voice. “’This one? Or this on? Is it it this one? Would you like this one? How about this one?’”

Some may call Neeku naïve, but Brener prefers to think of his character as endearing. “He is just like the most loyal friend that you could ever hope for. So loyal that sometimes you just need a break.” Neeku may be obtuse, but he’s never disingenuous.  “His heart is always in the right place,” Brener says.

Brener -- who graduated from Harvard University where he studied English, creative writing, and theatre – is no stranger to bringing “deeply nerdy” characters to life. He’s had an extensive career as an actor, appearing as a voice on the new Ducktales, as Dale on Big Bang Theory, and perhaps most prominently as software designer Nelson “Big Head” Bighetti on Silicon Valley.

Brener grew up in Houston, Texas, and first fell in love with acting in middle school, when his mentor and teacher the “great Larry Dachslager,” first directed him on stage, he says. Since retiring, Dachslager has become a student of cinema, and the two keep in touch. “He is still the person I turn to if I have questions that I need to figure out,” Brener says. 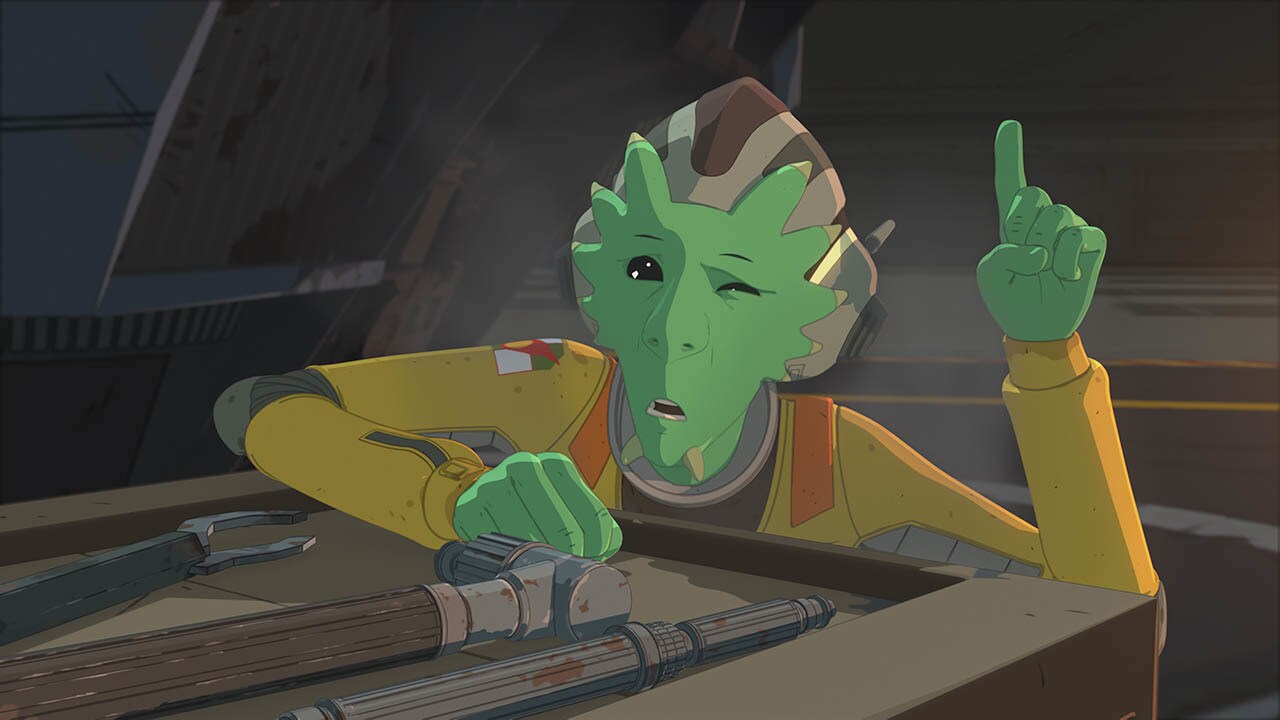 The relaxed atmosphere inside a recording booth is a welcome change from his on-screen roles. “The air conditioning is definitely better in the sound booth and the snacks are great,” he jokes. “There’s something that’s weirdly liberating about voice acting,” he adds more seriously. “When you’re on camera, there are so many things you have to think about and worry about -- marks and eye lines and flyway hairs, just like a lot of technical stuff.” But when he’s recording for Neeku or his other animated counterparts, “you can throw your arms up in the air and nobody’s going to see it. You can make stupid faces and it doesn’t matter. You can sort of just be as loose as you want to be because they’re only going to hear it.”

To Obi-Wan you listen

Long before he fell in love with performance, “[Star Wars] was a part of the fabric of my childhood,” he says, and a part of his life longer than he can even remember. “I have two older brothers and it was just like our vocabulary. We watched the movies, we played with the Millennium Falcon every day of our lives,” he says. “I grew up watching the original trilogy with my brothers and I remember vividly going to midnight screenings for the three prequels with my friends in high school.” 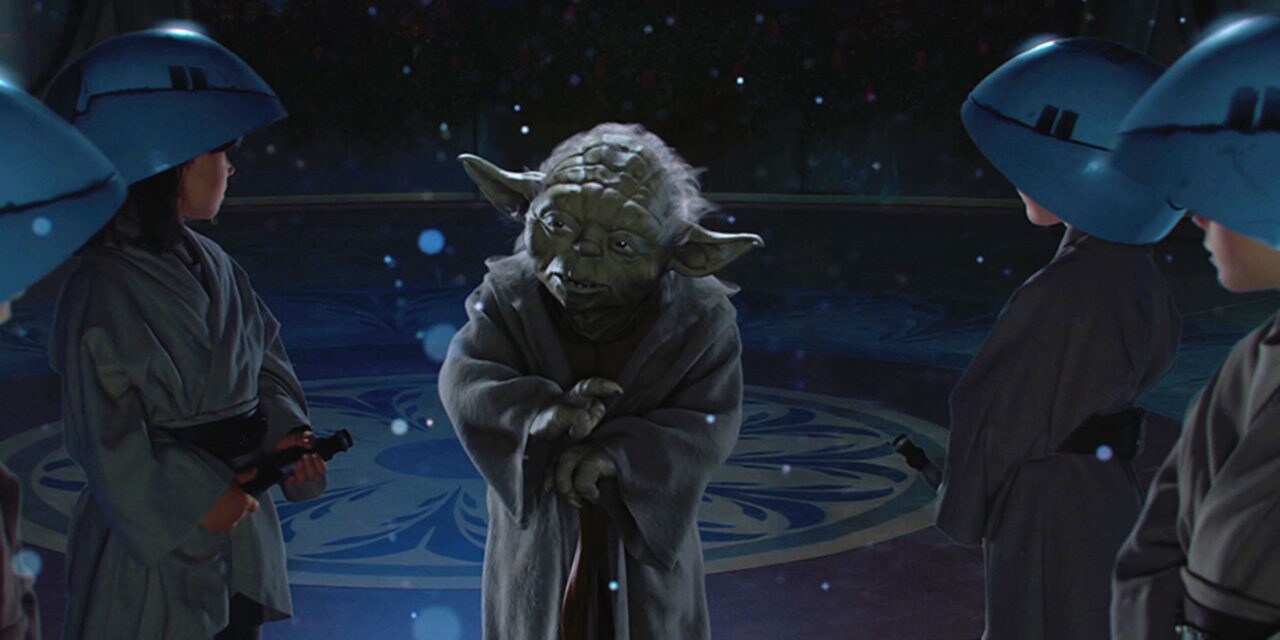 The Force itself resonated with the young Brener. One of his favorite moments on film is inside the Jedi Temple in Attack of the Clones when Obi-Wan enlists the help of Yoda and the younglings to find a missing planet in the archive maps. “He’s leaving the room and he just used the Force to grab this marble and it floats over to him. And even now, I get chills,” Brener says. “Something about that moment, that there’s something casual about that incredible, awesome power….It’s always been deeply resonant for me.”

As a child, his favorite character was always Obi-Wan Kenobi, possibly due to Brener’s old soul. “I don’t know about old soul,” he counters. “I’ve certainly always been an old man at every stage of my life.… Even as a kid, I always wanted to hang out with the adults, people who seemed to know what was up.” That included the wise Master Yoda. “Those characters that were sort of the powerful protectors of the Force.”

More recently, Brener has been an unabashed fan of Star Wars Rebels, he says naming Sabine Wren as “my current favorite character in the Star Wars universe.” Not only is the Mandalorian warrior “a total [badass]” in Brener’s book, she’s also voiced by his good friend Tiya Sircar. “I have both Sabine and Tiya to thank for where I am now doing a voice on Resistance.”

The two actors met on the set of The Internship and became close friends. “She found out what a ridiculous Star Wars dork I am and subsequently, once she started doing Rebels, she very kindly and sweetly – and I will never thank her enough for it” told Dave Filoni all about him. “After a few seasons of her pestering, it worked out,” he jokes.

Stepping into the recording booth with the Rebels cast was “like a master class” in voice acting, he says. If someone had told him in childhood “that I would get to [create] Star Wars in some professional capacity, I would have just been like, ‘how do I transport myself to that time immediately?’” 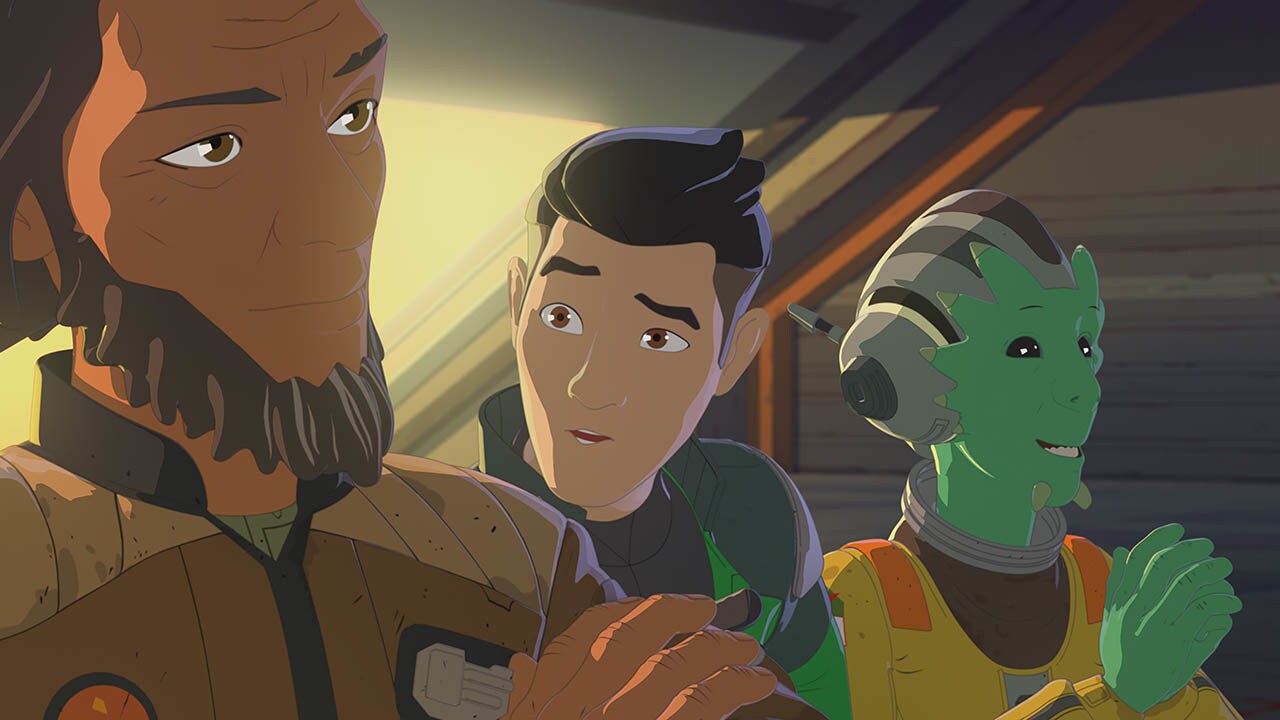 His education has continued with the Resistance cast. “We’re just such a bunch of goofballs and we have such a good time joking around and doing silly stuff between and during takes,” he says. “Day in and day out, Chris [Sean, voice of Kaz] is such an amazing leader. The whole show is on his shoulders and he does it with poise and such great energy, grace, and gratitude. He’s exactly who you would want to be that number one. And then Scott Lawrence [voice of Yeager] brings this breadth of experience and this cool gravitas. And Suzie [McGrath, voice of Tam]…I just love to listen to Suzie talk. She just has this beautiful, mellifluous tone. It’s such a great bunch; we’re really lucky.”

Brener still remembers the moment he realized he was taking his first steps into the larger world of Star Wars canon. Watching an early piece of animation for the show, Brener saw starships and speeders whiz by on-screen, and then heard his own voice. “I was like, ‘you’ve gotta be kidding me.’ That is still something I am totally not used to and I don’t know if I’ll ever get used to it.”

Brener is quite clearly in awe of his own good fortune. “It’s totally surreal and the luckiest thing in the world.” And he can’t wait to share Neeku with the fans.

“I am excited for people to see it…this little universe within the universe,” Brener says. “I think it’s going to be so great for families to watch together. It’s fun and it’s bright and it’s vibrant and it’s funny… There’s definitely a lot to grab onto as we explore what’s going on in the Outer Rim.”

The one-hour series premiere of Star Wars Resistance will make its debut on October 7 on Disney Channel (10 p.m. ET/PT) and DisneyNOW. Two additional new episodes will be available via the DisneyNOW app and Disney Channel VOD earlier the same day.