Welcome to the Resistance: Meet Christopher Sean, the Voice of Kaz

The actor tells StarWars.com how he transforms into pilot-turned-spy Kazuda Xiono and what the new show means to him.

Much like his animated counterpart Kazuda Xiono, screen actor Christopher Sean had to overcome the challenges of a new mission in his debut as the voice of the young pilot-turned-spy on Star Wars Resistance. 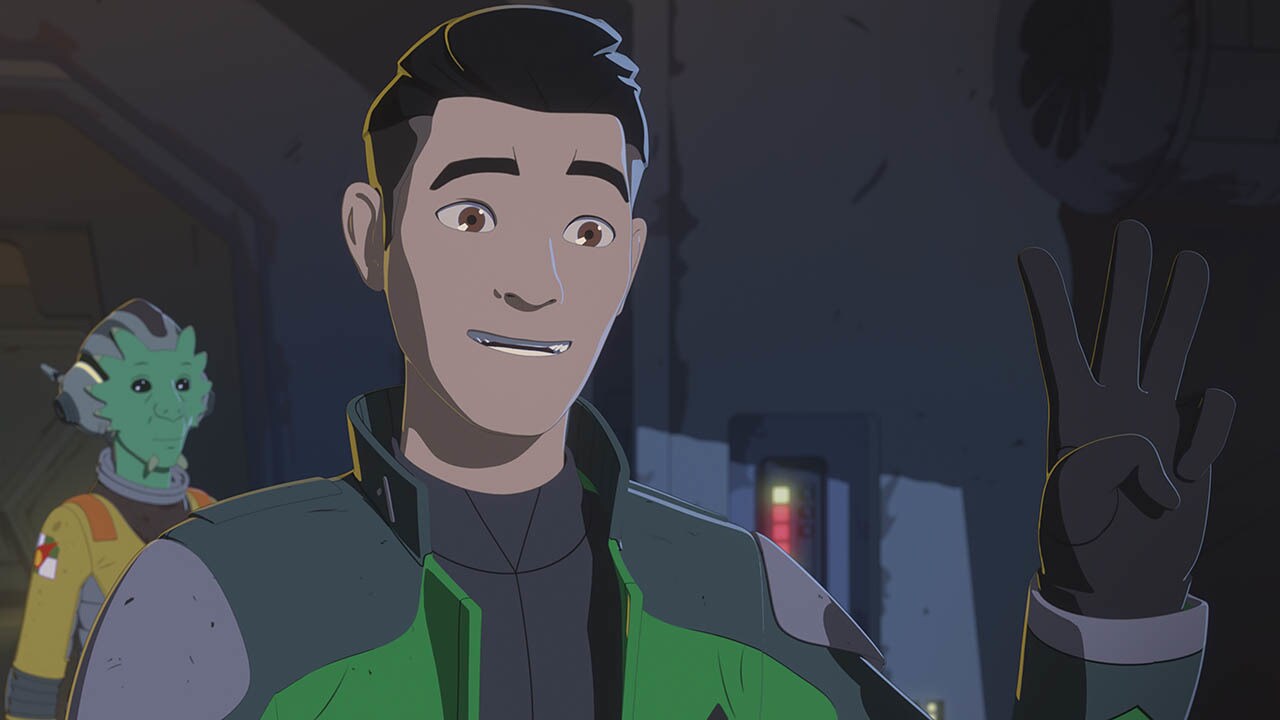 “There’s a saying: ‘They can’t hear your eyebrow raise.’” Sean says. “So it’s one of those things. How do you relay that emotion through your voice? That’s what you have to figure out as an actor.”

Fortunately, Sean had the support of the creators and fellow cast members who form the Star Wars Resistance family. “We are Team Fireball,” Sean says. “In essence, on camera and off, we’re a team.”

On a typical day in the recording studio, you can find Sean acting opposite the likes of Scott Lawrence, Suzie McGrath, and Josh Brener, as they record scripted lines, ad-lib and improvise new jokes, and play word games like the rhyming riddles of Hinky Pinky in between takes. “Getting in the room and watching these performers, all these very experienced voice actors work, I picked up a lot as quickly as I could,” Sean says. 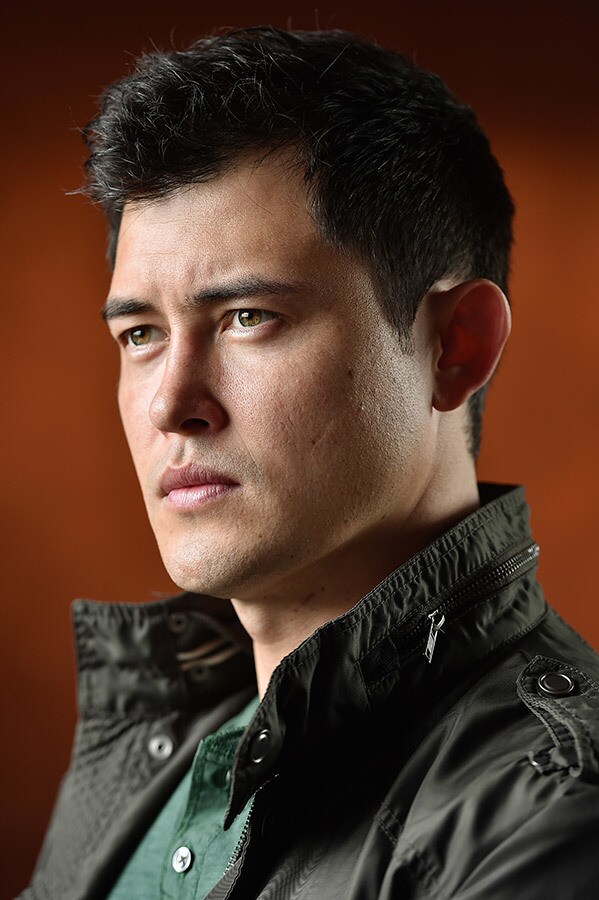 Sean learned early that voice acting was a bit like performing in the theatre -- bigger, louder, and sometimes more intense than on screen. “I am accustomed to subtlety,” he says. In live-action roles, "the idea [has been] not to blink, [to] stay still and as strong as possible when you say your lines. And then you come into voice acting and it’s like ‘No, no, no! Close your eyes and just go crazy.’… Live in the moment and be there, that’s the best way to convey it, just really go for it and let your imagination run wild.” 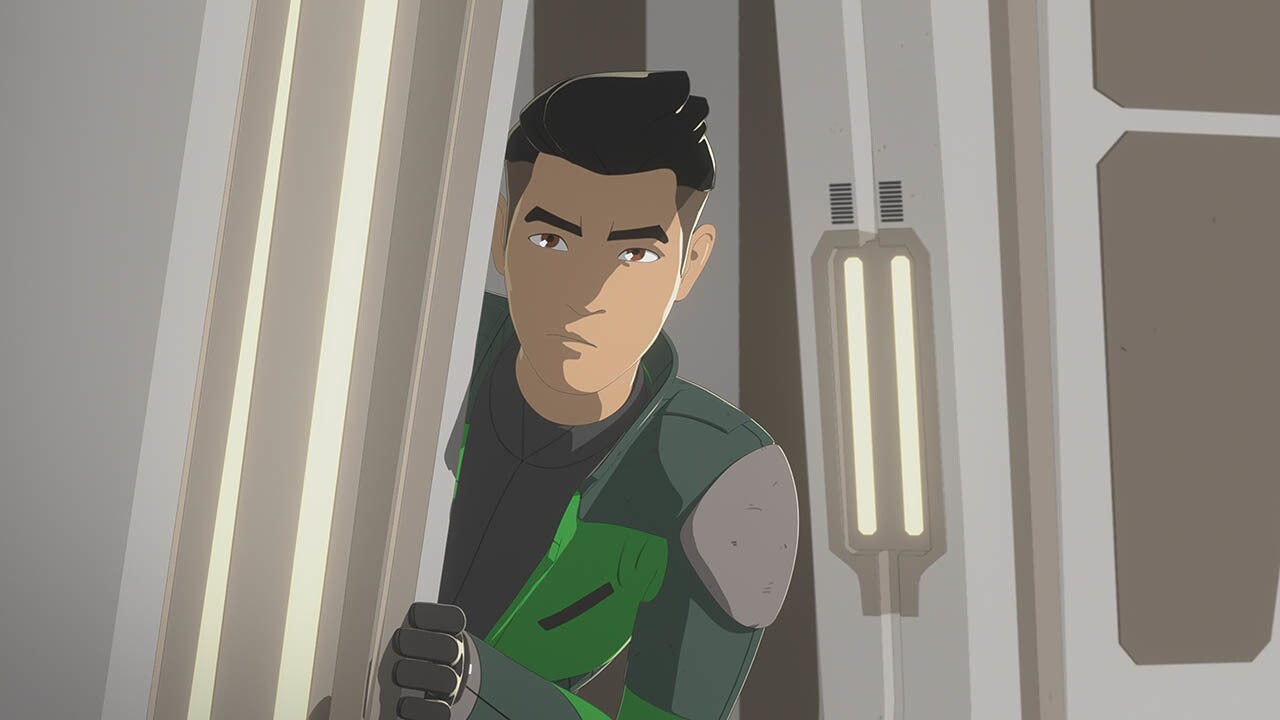 Some of his expressions in the recording booth have been captured in Kaz’s movements and expressive faces. ”You have to play to the back of the audience, as they say, raising your voice, using your hands and gestures, utilizing your body, because they do record you,” he says. When he watched a finished cut of the show, he could see the resemblance. “Those are the faces I was making recording it! That’s so cool.”

Sean recently sat down with StarWars.com to talk about finding Kaz’s voice, the excitement of seeing fans and “Kazplayers” already embracing the new character, and the importance of seeing such a diverse corner of the galaxy on screen.

To create the soul of Kaz, whose privileged background hasn’t prepared him for the characters he encounters during a mission on the Colossus platform, Sean took inspiration from his own father, a Navy veteran; his three step-children; and the characters he’s played in the past, as diverse as the kind and compassionate Paul Narita on Days of Our Lives to the nefarious Gabriel Waincroft on Hawaii Five-0.

It was his father who first introduced the now 32-year-old Sean to the magic of Star Wars through The Empire Strikes Back, he says, when he was “a wee lad. I was a Padawan in San Diego.” Born in Washington state, the family lived in Canada, the Philippines, Japan, Mississippi, and elsewhere before putting down roots in southern California. “You get so culturally shocked everywhere you go,” Sean says. “And then change becomes regular.”

Discovering the galaxy opened up a universe of possibilities. “I just remember thinking … this is everything,” he says. 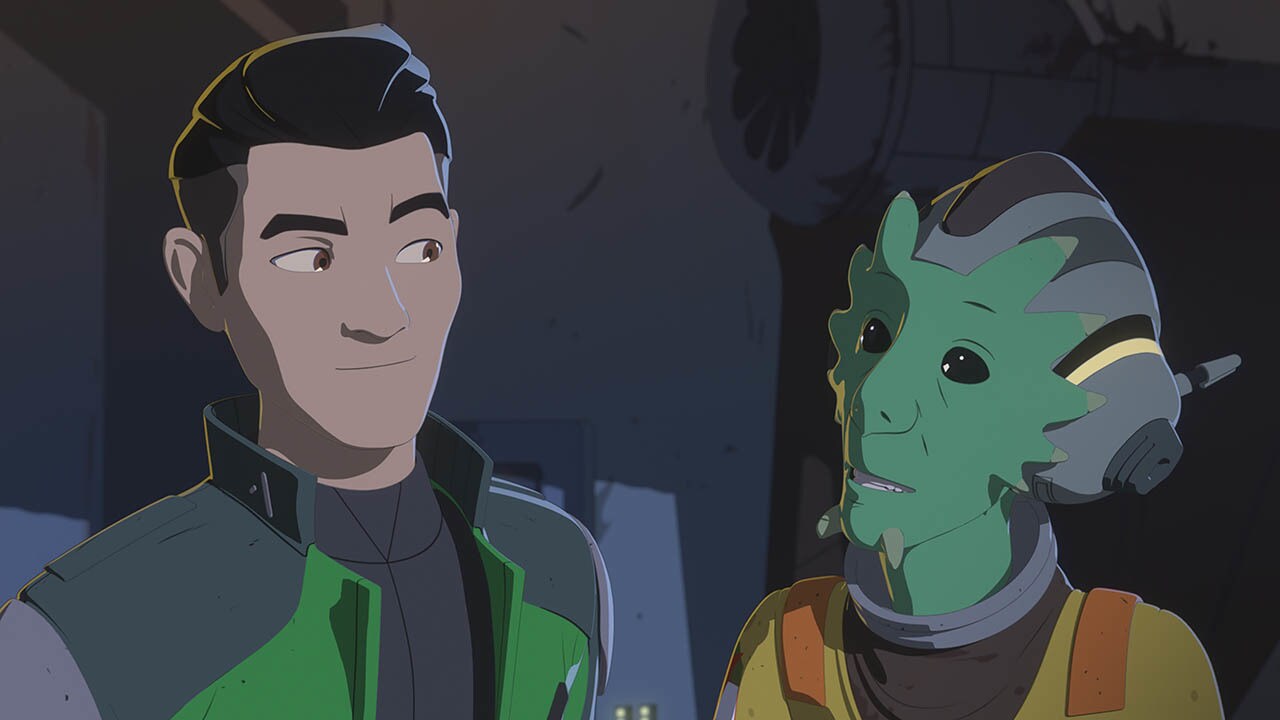 Sean’s father’s experience in the Navy was a significant inspiration in his approach to Kaz. “There’s a respect and an honor that come with being in the military and it’s earned,” Sean says. At the same time, his father has always had a healthy sense of humor. “I just look at my dad and...he’s a total goofball,” he says with a laugh. “I can apply the same qualities to my character. When it comes to getting the work done and always keeping a level head amidst the chaos, I think of my dad and try to put that into Kaz.”

But Sean’s father is just one of the sources of inspiration. His stepchildren -- ages 9, 11 and 14 -- also help inform the character. “They’re all very smart. And each of them have their own unique personalities, their love of learning in life, no matter what...Watching their excitement, seeing that genuine love and happiness, that’s Kaz." He applies it all to his performance.

Sean, whose mother was born and raised in Japan, hopes the next generation of young fans and their families will find a new role model in the diverse and eclectic group of characters on the show.

“Me, growing up, I really didn’t have any role models or representation on camera," Sean says. "It’s nice to see someone say ‘Hey, that's me! I’m that character!’” 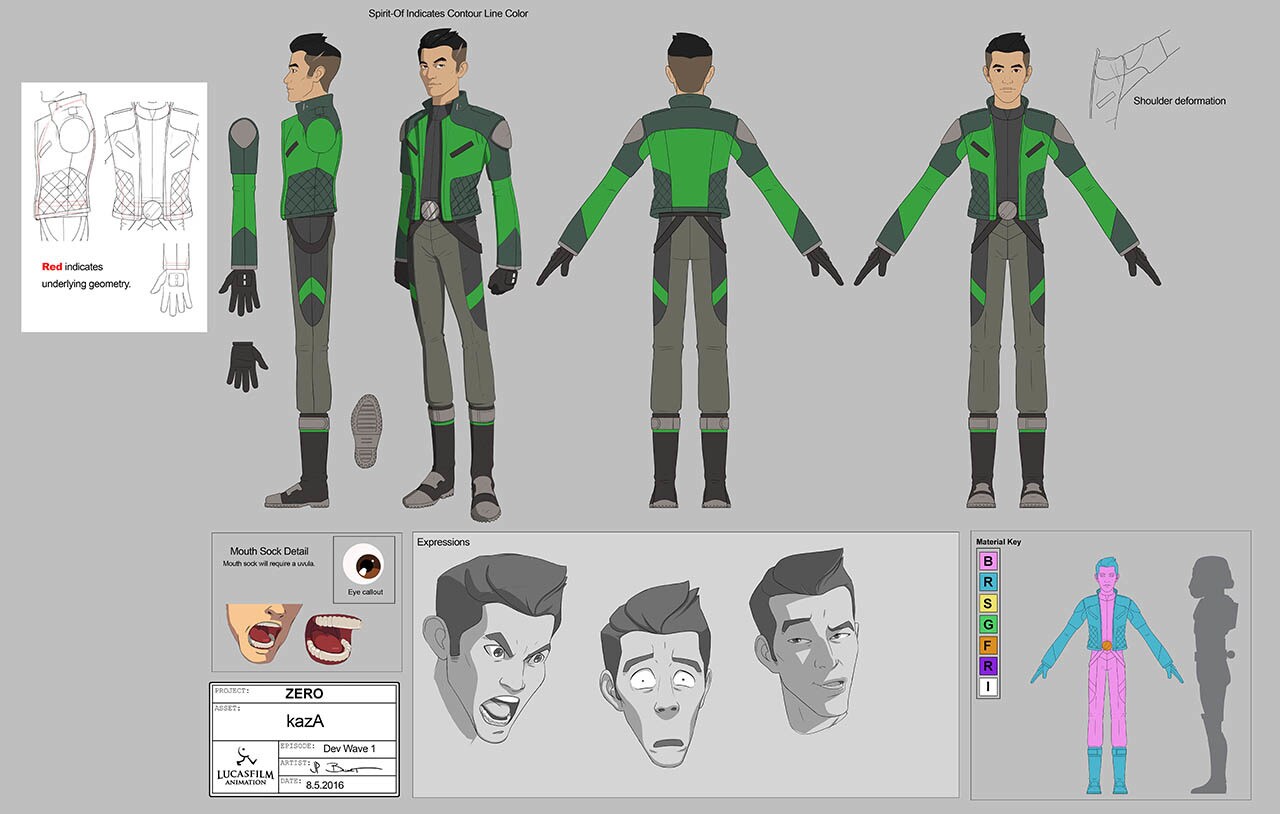 In fact, fans have already embraced Kaz and the rest of the new characters, using social media to post fan art and plot cosplay ensembles based on the characters, which Sean has dubbed “Kazplay.” “The fact that they’re doing it, that’s amazing to me,” the avid Instagrammer says of the fan artists. 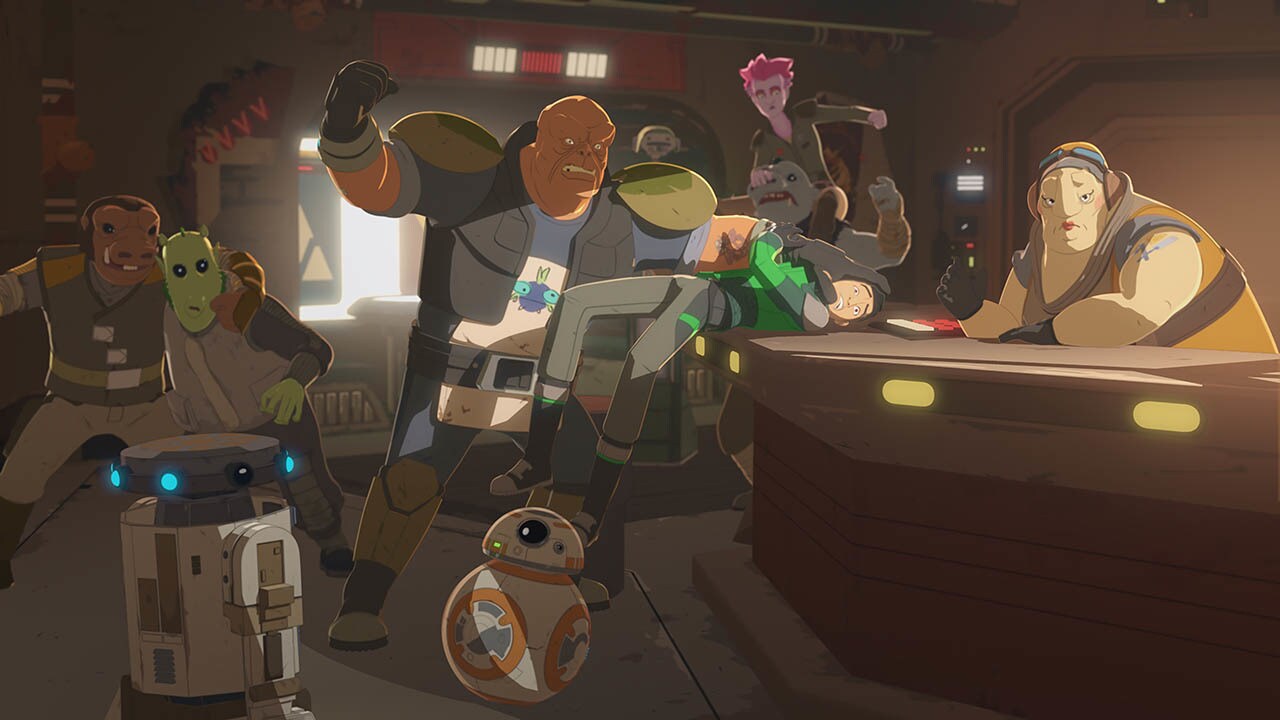 On screen, Kaz is surrounded by a colorful cast of misfits, mechanics, and ace pilots just trying to find their way. “Kaz is just living out those simple mistakes that we make in life.” He tries to blend in and he ends up sticking out. He tries to be quiet, but ends up knocking over something loud. “He’s so fun,” Sean says, and easily relatable. Kaz learns from each character in the show, including Yeager, Tam, Neeku, Tora, "and so many other wonderfully developed characters." It's clear Sean is excited for everyone to see the stories they have to tell.

Behind the scenes, Sean has a similarly welcoming crew of fellow actors, a team so beloved he can’t pick a favorite. “Yeah, that’s a trap,” he says with a laugh at the request. “You learn so much from each person…We have so much fun,” Sean says. He feels fortunate to work with such a talented cast. “We get to play off each other and just create things.” 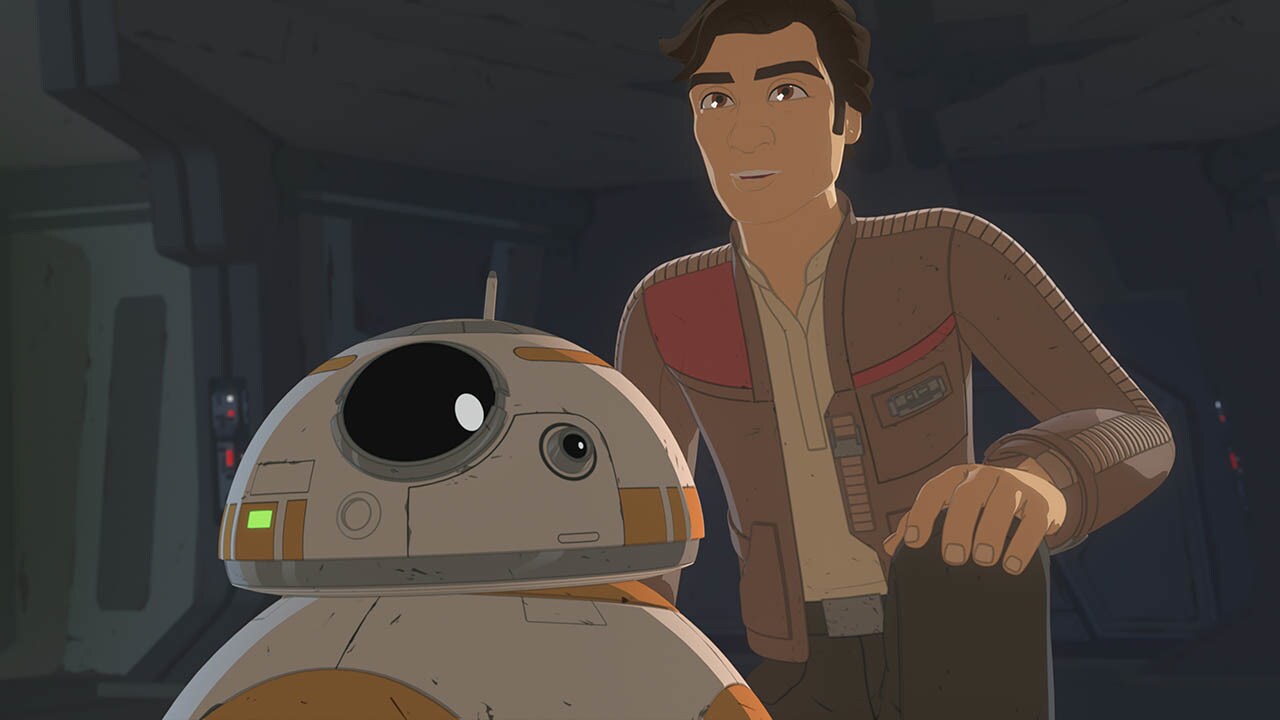 And like Kaz, Sean is humbled to be in the presence of Poe Dameron himself, acting in scenes with Oscar Isaac reprising the role he created on film. “I just watched [Oscar] perform Hamlet in New York," Sean says, and was thrilled to have the opportunity to record with him there. "[He makes] such strong choices as an actor, which guides me. I know exactly what I’m supposed to do." And that creates the perfect dynamic for playing Kaz.

Now it’s time for Sean to pass on what he has learned.

Like his father before him, he’s already introduced his step-children to Star Wars. But he can’t wait to share the experience of Star Wars Resistance with his whole family. “They’re very, very proud and very excited," he says. And they couldn't wait to tell their friends.

He hopes other fans with families of their own will join in. “As fans of Star Wars, our job is to continue to share the love that we had as kids with others. That’s our job." So he's happy to share his passion for these stories and lore with a younger generation. "I hope children can come up the same way we did," he says, with all the excitement and curiosity for exploring the whole Star Wars universe.