Star Wars Pinball: Insights and Tips from the Jedi Masters Behind the New Solo Pack

StarWars.com speaks with the designers behind three new Solo: A Star Wars Story-inspired tables -- plus, we smuggle some hints on how to up your game.

In many ways, being a great pinball player is a lot like being a successful Star Wars scoundrel: you have to know the angles, always keep your eye on scoring a jackpot, and wait for just the right moment to shoot. Today, that's especially true -- the Solo Pack, featuring three new Solo: A Star Wars Story tables, has arrived in Star Wars Pinball for Pinball FX3.

Having played the release in advance, StarWars.com is happy to report that the tables are a wonderful celebration of Solo and its characters, and great pinball games in their own right. The Solo table is a faithful trip through the film, complete with a zooming conveyex train, Millennium Falcon in the playfield, and the film's various worlds all represented; the Calrissian Chronicles table is a love letter to Lando, incorporating his style and stories from various mediums, including Marvel's acclaimed Lando series by Charles Soule and Alex Maleev; the Battle of Mimban table, based on a short scene in which the Empire looks to take over the mud-covered planet, is a muddy masterpiece, with rusty habitrails and up-close looks at the not-so-pretty Mimbanese. From a purely design perspective, the pack is a major success; these tables are all unique from each other, but still look purely Star Wars and Solo. Moreover, they're all filled with fully-animated 3D characters, creatures, and vehicles, taking advantage of the video game form to further capture the feel of the movie. But if you stripped away Star Wars and judged the tables as pure pinball experiences, they're just as successful, featuring layers of smart design and gameplay surprises, from the Solo table's clever skill shot to games of sabacc with Lando to Mimbanese warriors that pop up out of the ground. To celebrate the release, StarWars.com caught up with Thomas Crofts, table designer, and Márk Kovács, lead character artist, to discuss the making of the Solo Pack, from collaborating with Lucasfilm to creating a Lando table that covers the character's entire history. Here are some of their greatest insights, along with some tips for those looking to up their digital pinball skills. Punch it -- or in this case, launch it. 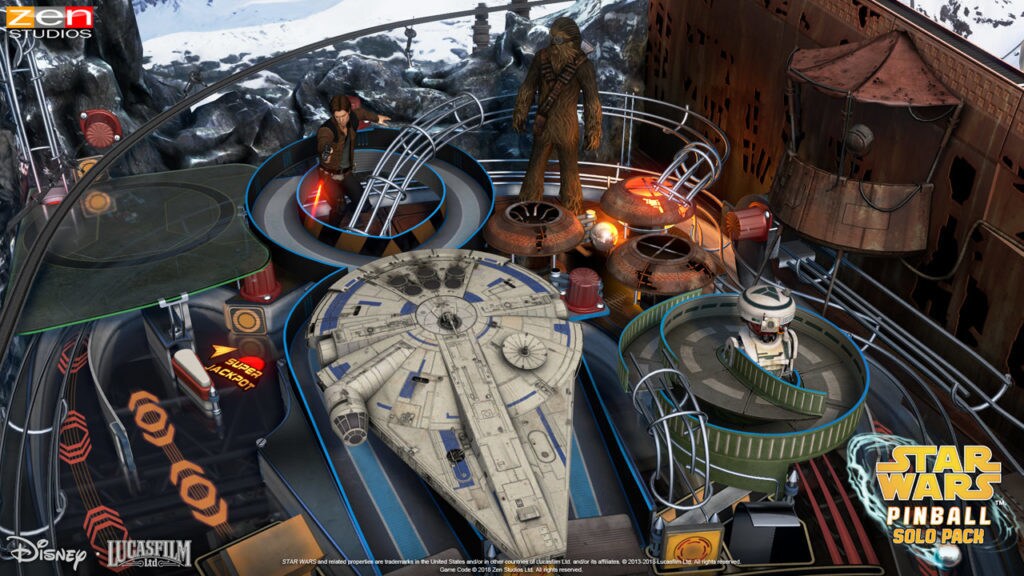 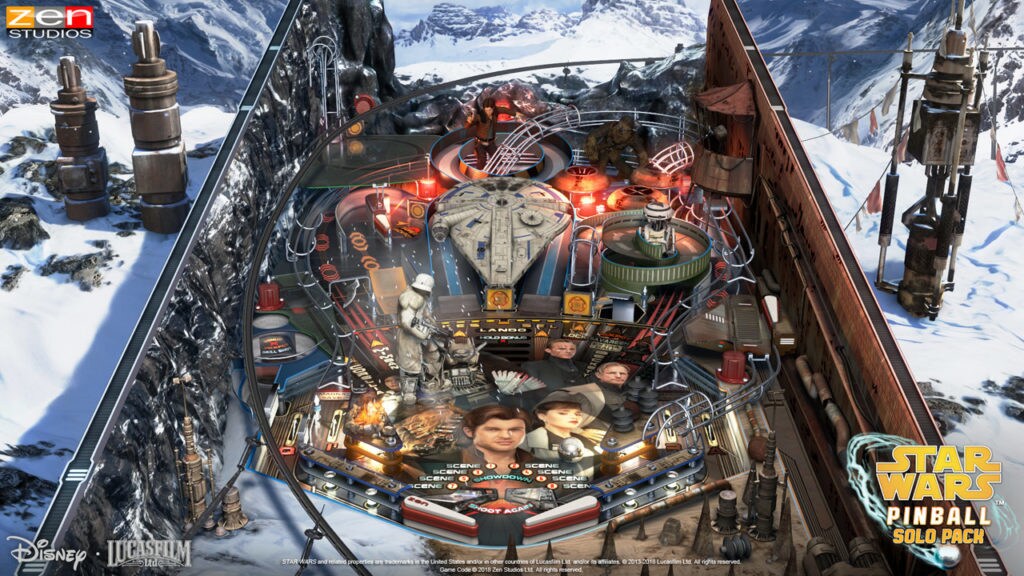 How Zen Studios approached the Solo Pack: "The diversity [of locations in the film] provided an opportunity to create three very different and exciting tables," Crofts says. "The hardest part was probably making it still feel like a pack of connected tables within the Star Wars universe -- things like using one voice actor for the same character across different tables helping to maintain a consistency and feeling for a cohesive experience."

The challenge of designing the Solo Pack's many 3D characters -- including Han, Lando, Chewie, the Mimbanese, mudtroopers, and stormtroopers: "My single most important job is bringing the characters to life along with directing the work of the animators, so we can add characters both remarkable and convincing enough to the tables, telling their own colorful story," Kovács says. "Portraying characters that are instantly recognizable, donning their own signature style, and capable of plausibly conveying their story just like in the movies. The most exciting challenge with each Star Wars table is that often the original movie is still in the making -- while we are always privy to some super-secret reference shots, only a handful of people have access to them. Getting the characters right, just as they will appear in the completed movie, is difficult, but at the same time also quite an intriguing and exciting journey." 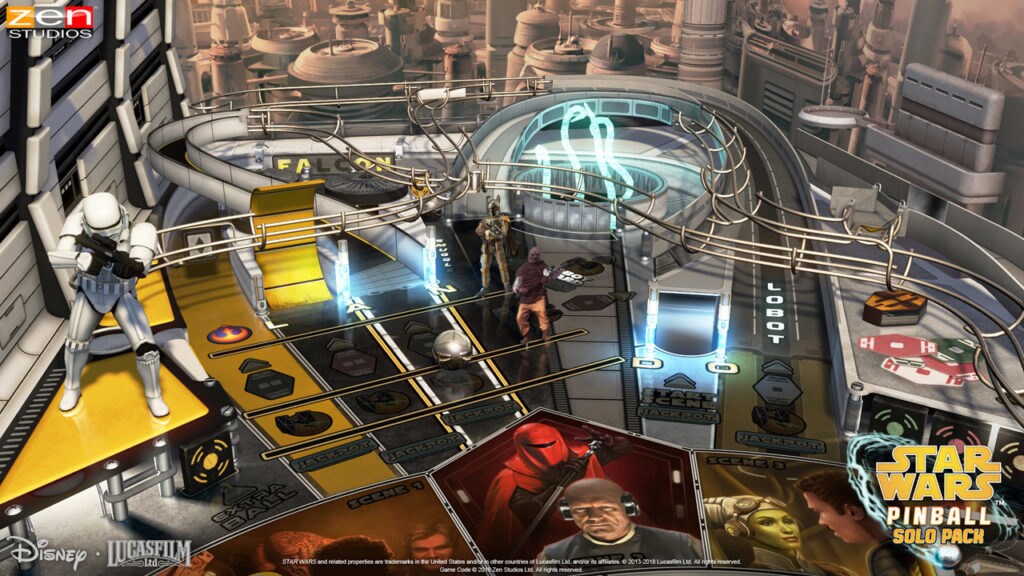 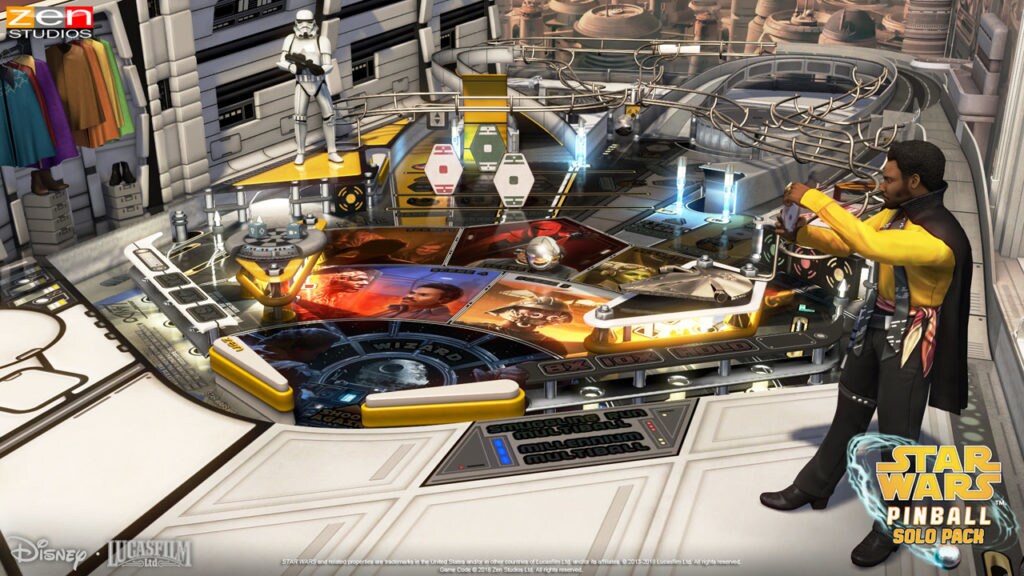 On including Easter eggs and elements from the film, such as utilizing Lando's blaster as the launcher on the Calrissian Chronicles table: "When designing the core pinball table, we are always working with Lucasfilm to think about how we can incorporate such details," Crofts says. "It can be that we design the gameplay feature first and look for a suitable item which would work well in its place, or the item itself is the main driving force of the feature’s design. Most importantly, we are always thinking how to incorporate these in fun and interesting ways for the player."

Kovács' favorite character to work on: "The single biggest challenge was the Mimbanese soldier, but my favorite character was Lando -- both of him," Kovács says. "Having the young and grown-up Lando in a table at the same time was truly an awesome opportunity, both acknowledging Donald Glover’s fantastic performance and paying homage to Billy Dee Williams’s portrayal. I always loved modeling the characters of existing iconic characters, and it was awesome working on the wardrobe and face of Billy Dee Williams based on video footage, watching again and again the very same movies I loved so much since my childhood. It’s fun to think about how a kid today sees Donald Glover in the same light -- and it’d be extra cool if they think of our game at the same time." 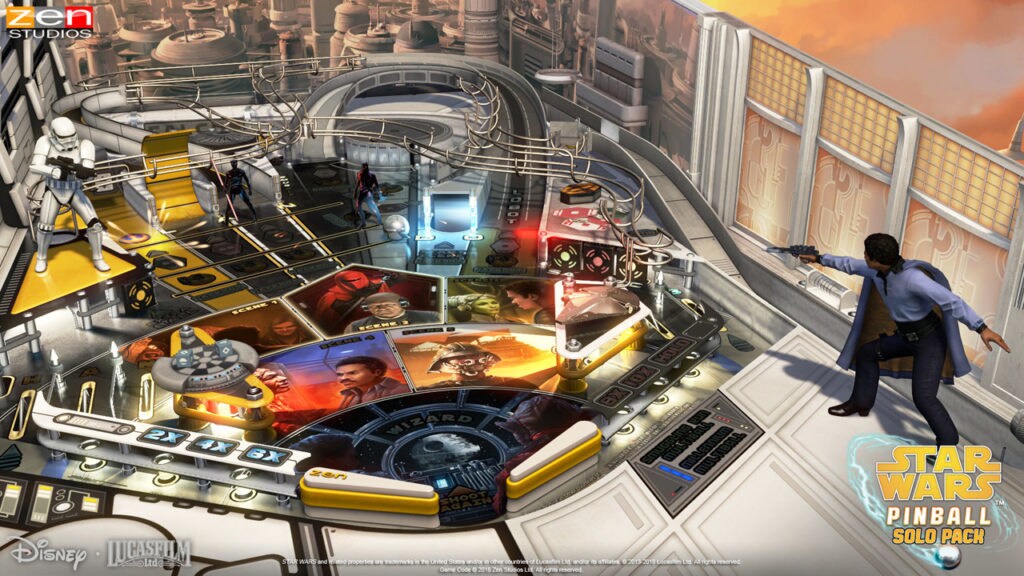 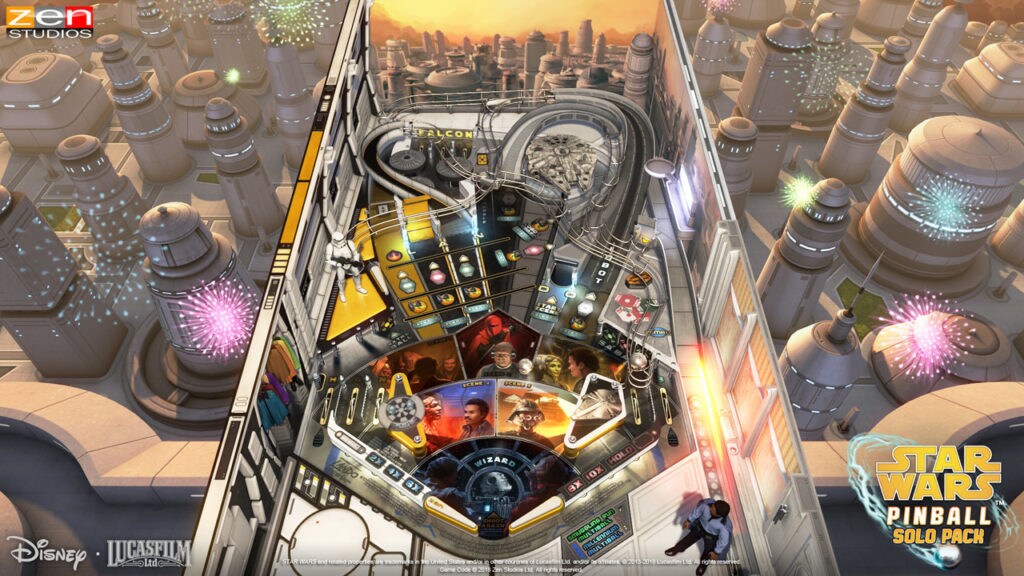 On developing the look of the Calrissian Chronicles table: "We initially decided that we must include the features most associated with Lando in the Star Wars universe," Crofts says, "which resulted in a mix of Cloud City from The Empire Strikes Back and the Millennium Falcon from Solo. Both have a very clean aesthetic to them, so they blend nicely. After our initial design, Lucasfilm was very helpful in getting the balance and exact look of these just right, and they were able to provide us with additional fine details, such as Lando’s wardrobe."

How Crofts and the Zen team blended stories and looks from the original trilogy, Solo, Marvel's 2015 Lando miniseries, and Star Wars Rebels for the Calrissian Chronicles table: "It was quite a challenge," Crofts says, "and we had to go through several iterations of the playfield before finding the perfect combination that would suit them all. It was also difficult deciding precisely which characters associated with Lando to include on the playfield, and in the end we chose to largely go with his sidekicks. A nice touch is the comic book-like bordering for the different scenes, which helps to clearly define the different stories on the playfield. If you’re a fan of Lando Calrissian, all of his most memorable story lines are represented on the table, and for the pinball enthusiasts who can complete the Wizard Mode, there will be a great sense of achievement in blowing up the second Death Star." 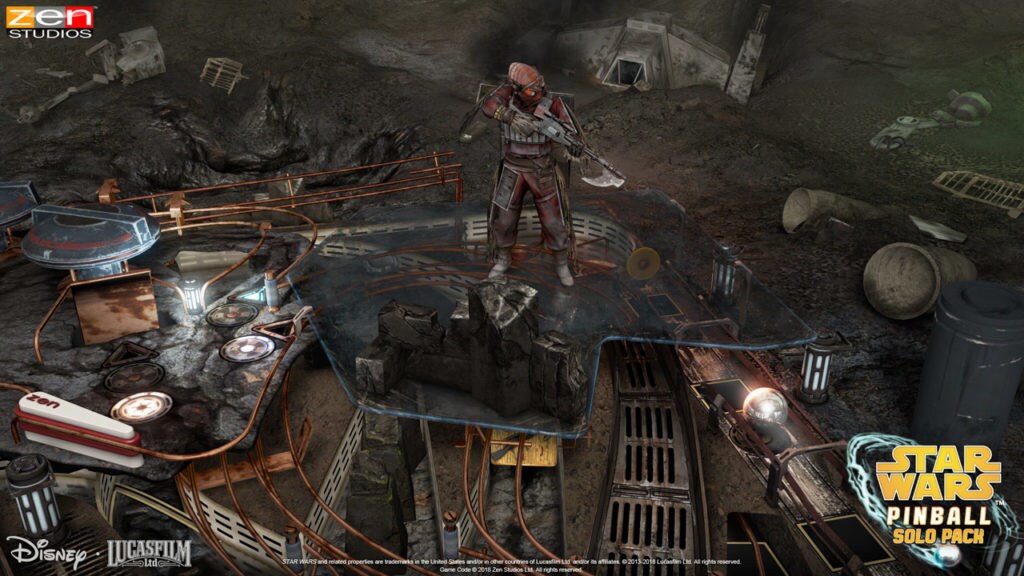 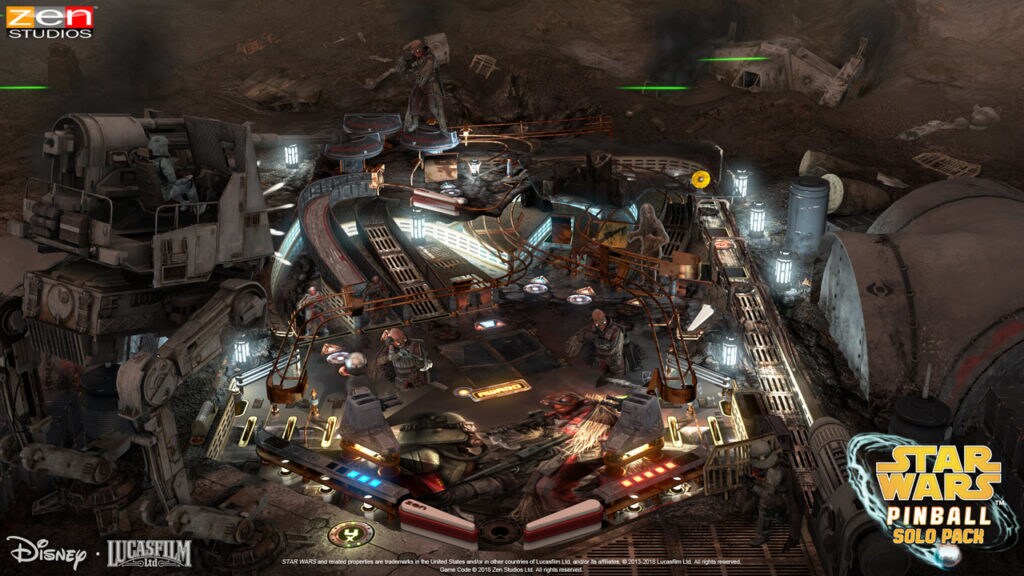 Why you should be excited to play the Solo Pack: "The diversity of the pack is really up there," Crofts says. "There are not only the visual differences, but the gameplay for each table is very distinct. Many of the exciting features are very easy to access, though mastering them all will certainly take a lot of patience and skill. It’s a pack we’re very excited to be releasing."

Ready for your digital pinball skills to make the jump to a new level? Here are some tips from Peter "Yoyo" Horvath, table designer for Star Wars Pinball!

1. Your focus determines your reality.

"The first rule of playing digital pinball is to not just hit the flippers randomly, but rather, try to time and aim your shots. Button mashing can sometimes work, but the best pinball players are cautious with their shots. The highest scoring modes on any table are usually the multiball modes. Try to activate as many as you can during your play, so you can rack up great scores on any of the Star Wars pinball tables."

2. Reach out with your senses.

"Although all pinball tables are different, they have one thing in common: lamp hints and dot-matrix hints. Usually when any mode is started, lamps will start to blink in front of the lanes you have to hit to complete the mode. If you focus on these lanes only you can rack up great scores. To aim precisely, try to trap or catch the ball with one of the flippers. When the ball settles, release the flipper -- the ball will roll slowly, and you have a better chance to aim for your target. Also, while the ball is trapped you can look up at the dot-matrix display, where you might find hints on what to do. On the Calrissian Chronicles table, for example, to earn big scores fast, start the main modes by hitting the right hole several times, and look out for the flashing lamps, hitting the lanes indicated. Check the dot-matrix display occasionally to see how many shots you still need to advance to the next phase of the mode." 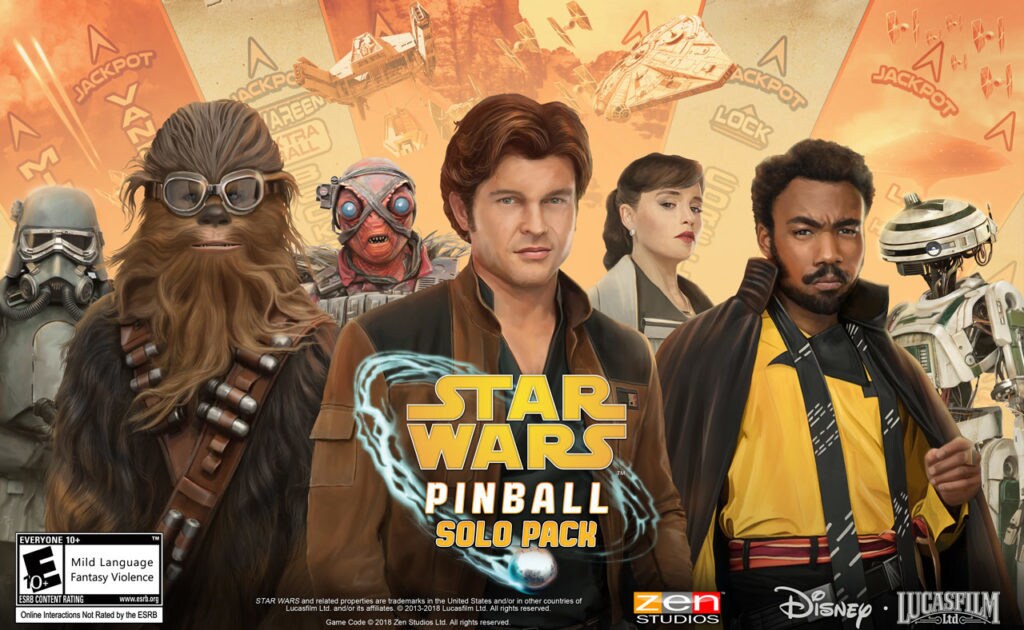 3. You must learn control.

"Ball control is another essential thing in a pinball game. Since all tables have the flippers in the same position, learning a few simple tricks on one of them will work on all other tables, too. Try to learn the nudge pass, which is pretty simple to perform on digital pinball machines: When the ball rolls down on any of your flippers, simply nudge the table up. This will throw the ball to the other flipper. This can be especially helpful on the Battle of Mimban table during a battle. Just keep in mind you have to wait before nudging again, since you can easily tilt the table."

"There is another method of passing the ball with the flippers, albeit a bit more risky, but it does not involve nudging at all. Just trap the ball on any of the flippers, and then release and activate the flipper again as fast as you can. If you did this trick well, the ball should bounce off the bottom of the slingshot in a way that it will land on the other flipper, so you can trap it there. Learning this will give you a huge advantage without the fear of tilting the table."

5. Don't be afraid to Force nudge.

"Nudging can be pretty helpful around the outlanes, too. Whenever you see your ball heading for an outlane, simply nudge the table in the outlane’s direction, so the ball will bounce back from the sidewall, saving it from a certain drain. You can also attempt a “death save” when the ball rolls down the outlane: simply hold up the one flipper where the ball will roll down, and nudge up the table so it can land on the other flipper. If you cannot pull it off for the first time, worry not: this trick is extremely difficult and requires perfect timing! Just keep on practicing!"

The Solo Pack is available for download on PlayStation 4, Xbox One, Steam, and Windows 10; the Zen Pinball and Star Wars Pinball apps host each table individually on the App Store, Google Play, and Mac.