Star Wars Pinball Readies to Change the Game at Home

How the combined strength of Zen Studios and Arcade1Up is making pinball dreams come true.

Zen Studios has been delivering digital pinball games set in the Star Wars galaxy since 2013. Based on the iconic films, animated series, characters, and even specific battles, they have allowed fans to enjoy their favorite sci-fi saga in a fresh way, across nearly 20 different themed tables.

The games have appeared on every imaginable platform, from smartphones and PCs to all home consoles in between. But as Zen's chief operating officer Mel Kirk explains, the experiences have changed and evolved with each new release. “As new devices and new technology have been introduced, we've been able to optimize and add things that make these games feel alive again for the first time, for new audiences.”

Just last year, the studio ported all 19 entries -- in one amazing package -- to the Nintendo Switch, leveraging many of the hardware's innovative features in the process. Immersion-ratcheting HD rumble and the ability to orient the Switch's screen vertically were among the welcome tweaks that injected additional layers of authenticity. 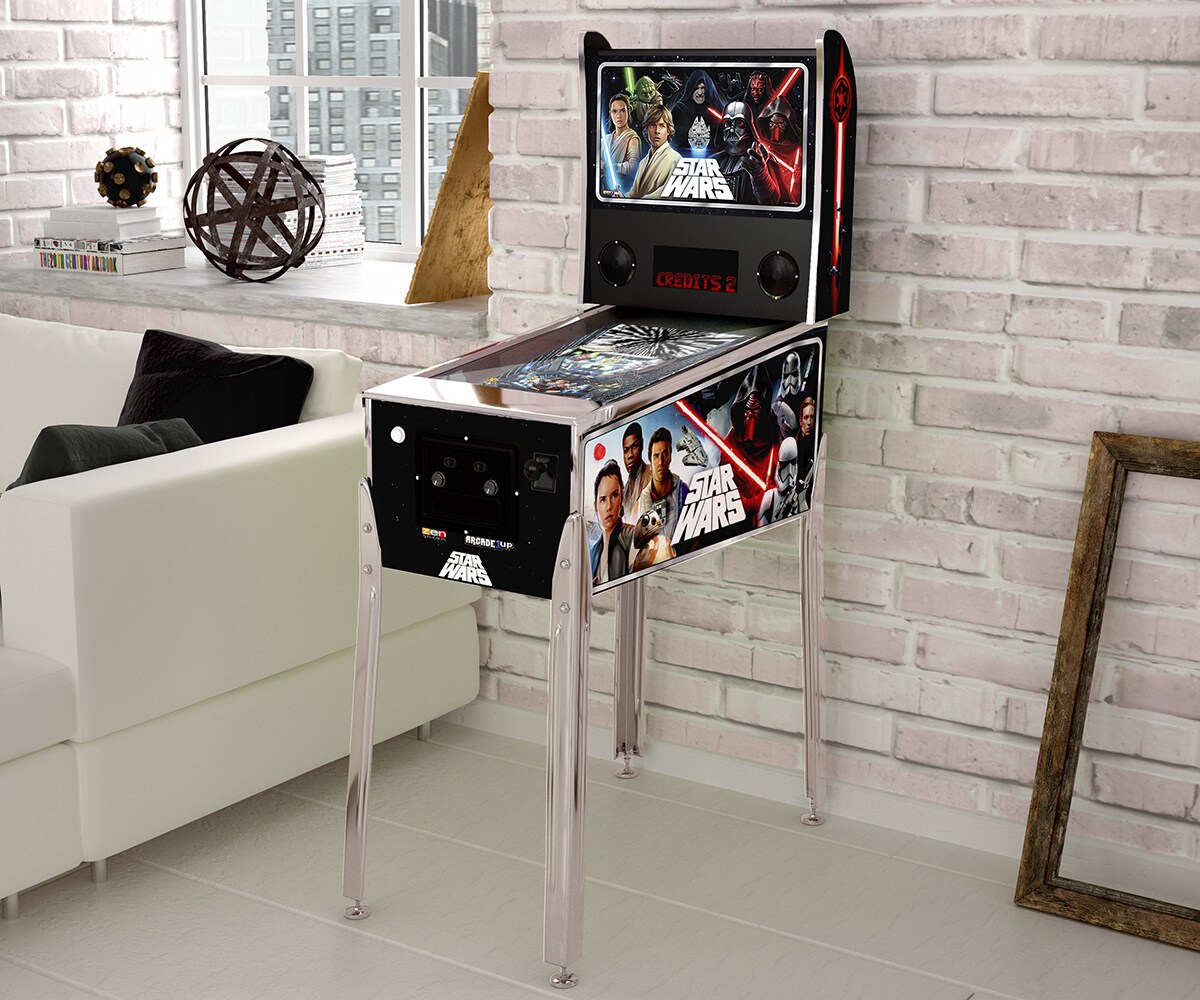 Tastemakers senior VP of licensing and business development, John Diamonon, describes the promising project simply, as a, “physical pinball table that features digital software.” Much like he and his team's line of popular arcade cabinets, the ¾ scale Arcade1Up Star Wars Virtual Pinball machine will be an accessible option, letting fans enjoy an authentic arcade experience in the comfort of their homes.

But as Diamonon explains, this new venture opens up even more opportunities to move the interactive entertainment medium forward. “Our number one focus is to make a really authentic experience, with the best software, that allows you to feel immersed in the games you're playing. But we want to take it one step further. We want to take Zen's software and bring it to life...so when an AT-ST walks across the screen, you'll feel the haptic feedback on the table itself.”

Coupled with built-in accelerometers, that haptic feedback technology will play a critical role in delivering an arcade-accurate experience both Star Wars enthusiasts and pinball wizards will appreciate. Players will feel the effects of hammering on the flippers, pulling the plunger, and nudging and tilting the machine.

But this cool tech is also being used to bring Zen's virtual pinball to life like never before. “We're really optimizing the games with the hardware. We're doing custom mapping, working on the controls, making sure the buttons feel right, and that the response on the accelerometers feels right. It's going to feel like a brand-new game.,” shares an enthusiastic Kirk.

For Star Wars stalwarts, this means not only seeing, but feeling many of the slick effects that unfold as they chase those high scores. Diamonon's aforementioned trampling AT-ST only scratches the surface of how these games' legendary heroes and villains, soaring starships, stomping creatures, and epic action scenes will spring to life.

“These are video games, so we embrace that,” explains Kirk. “We have 3D animated characters -- perfect likenesses of everyone from Boba Fett and Darth Vader to Han Solo and Rey; we have TIE fighters and the Millennium Falcon -- even the Slave I -- flying around the table. You're going to have representations of all these things happening in a way that would not be possible in a real-world machine, so they feel alive.”

While experiencing the tactile feedback of a tauntaun trotting across the table will no doubt be a fan-pleasing highlight, Tastemakers director of marketing and communications David McIntosh says the machine will also provide a new platform to unspool these games' evolving tales. “As you progress, they begin to tell a story. Once you get to those high scores, you really see stuff you wouldn't normally see when starting out. It really is evolving as you progress, a unique factor you wouldn't get on a traditional pinball table.”

Whether you come for the haptic feedback-fueled effects or the chance to relive Star Wars' epic storytelling in a fresh way, you'll also be scoring a cool collectible. Constructed of wood and metal, the just-under five-foot machine will feature dual speakers, eight-inch LCD animated score screen, adjustable feet, and an impressive, recessed 24-inch HD LCD play-field.

Of course, the real draw for fans and collectors alike is the amazing art adorning the outside of the hardware. The back-glass image features dark side characters -- Darth Vader, Darth Maul, and Kylo Ren -- on the right, countered by Rey, Yoda, and Luke on the left. The bad guys get a bit more love, though, with an especially menacing Emperor Palpatine positioned in the image's center. Fantastic artwork stretches along each side of the machine, as well, giving fan-favorite characters from the original and new trilogies their due.

Diamonon, who sees this exciting project as, “a natural extension” to their line of Arcade1Up home products, wasn't ready to share many more deep-diving details on the table just yet, but he did offer this tease: “We're definitely going to have 10 tables at launch, with the aim to have a good variety between the animated shows and theatrical films.”