Star Wars in the UK: Together We Shall Ruler the Galaxy

In the late '70s and early '80s, Star Wars invaded the classroom -- in the form of pencil sharpeners, rulers, and school supplies courtesy of Helix. 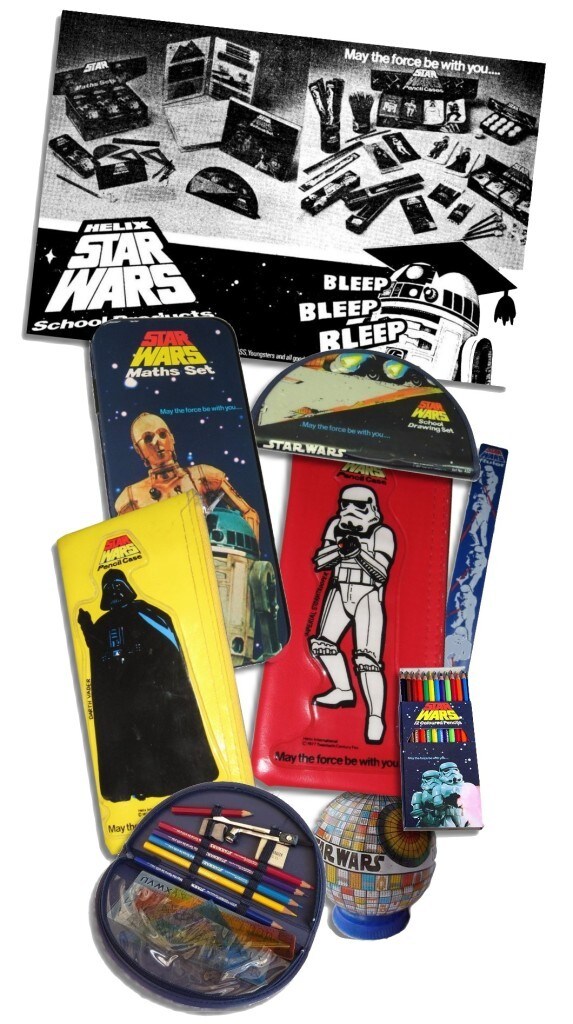 Back in the day, when Star Wars first hit the shores of the UK on December 27, 1977, no one -- not even Master Yoda himself -- could have possibly imagined the impact this $11 million dollar motion picture would have not only on sci-fi but on the world at large. Kids and adults lost their minds in equal measure as the people of the already disco-dominated '70s suddenly found something even more colorful to turn their attention to. In a decade scarred by the trauma of Vietnam, Watergate, and the loss on August 16, 1977, of Elvis Presley, George Lucas' space fantasy couldn't have come along at a more opportune time. The public of the United States and the wider world was hungry for its magic.

Here in the UK we faced a different but no less difficult set of challenges. The ongoing troubles in Northern Ireland affected families on both sides of the Irish Sea and either side of the border. Three day weeks, brown outs and strikes affected the nation’s productivity. The Queens Silver Jubilee on June 7, 1977, had gone a long way towards lifting the spirits of the country whiles at the same time the continuing rise of the Sex Pistols shook society to the core. The UK, just like our cousins in the States, were ready for Star Wars. 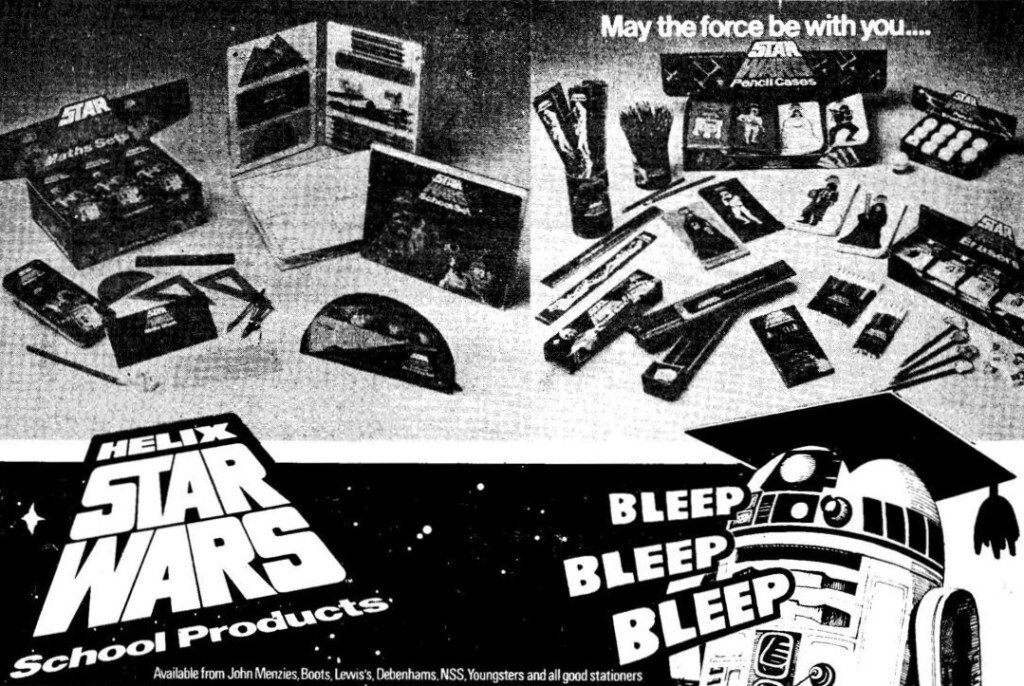 It's well documented that the surprise success of the film caught almost everyone out. Easy win products like posters, iron-on transfers for t-shirts, Letraset transfers and badges were everywhere to be seen and so it was that one of the very earliest licensees entered the market offering school kids across the UK the chance to show their love for Star Wars via their school supplies. That company was Helix.

Established in 1887 as The Universal Woodworking Company, the Helix brand was launched in 1894 and by 1960 the company was known as the far more familiar Helix International Ltd. In 1977 the company was thriving, buying up smaller companies such as cash box makers Dunn & Taylor and eraser makers Colonel Rubber Ltd, and so it was that Helix became one of the very first licensees, taking on the nascent Star Wars license and bringing a wide array of branded products to the UK market in early March of 1978. Those products included vinyl and wooden pencil cases, rulers, pencils, maths, school and pencil sets, erasers and die-cut erasers, and the infamous Death Star pencil sharpener made famous by its prominence in Steve Sansweet's now iconic From Concept to Screen to Collectables book.

Let's take a look at some of those early and now much-sought after items. I have a personal connection to this as one of my first pencil cases as a school kid was a white Ben Kenobi. All in all there were eight vinyl pencil cases to collect, all featuring the angled Star Wars logo designed by Dan Perri and used on the "A" and "C" posters. Luke, Han, Leia, and Ben Kenobi were white, the stormtrooper was red, C-3PO was green, Artoo was orange, and Darth Vader was yellow. These days the white variations are the easiest to find, cropping up on eBay for reasonable prices but the 4 color cases are rarer and more valuable, especially the red stormtrooper case which is the hardest to find. After all, where else are you going to keep all your Star Wars pencils and pens. 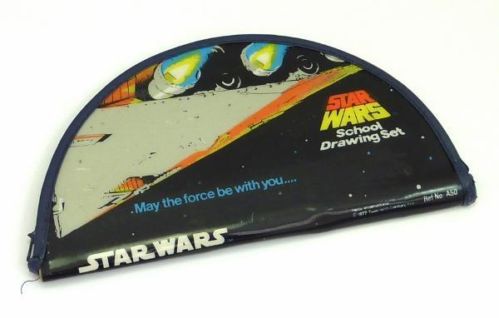 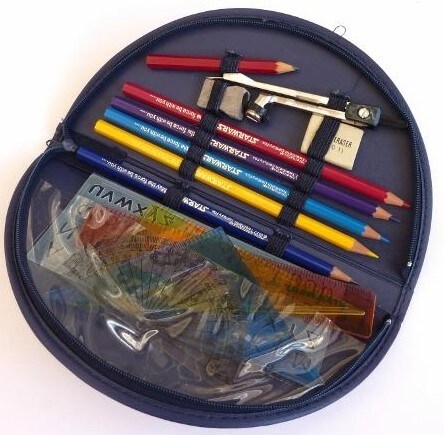 There's a good chance most collectors and fans will have seen this. Shaped as a zipped half-moon which opens up to reveal 4 colour pencils, a compass, a lettering stencil, set squares, radius and a pencil. All within a case adorned with a Star Destroyer flying overhead, the slanted logo in yellow and red on the cover and the classic logo on the spine. Today it's as evocative of the era as Secret Agents, ELO, Pacers, and Pam's People.

As mentioned earlier, the appearance of this in Sansweet's From Concept to Screen to Collectables made this a much-sought after item and as such the price for this sharpener has continued to rise as the years have rolled on. Originally a grey sphere, the machinery that produced it was set up to be full colour and so the technicolour sphere -- which is FAR more fun anyway -- was born. You can easily imagine using the Force to guide your now blunt pencil into the small thermal exhaust port that is the sharpener itself. And with those colours it looks just like a disco star - what better way to sharpen your 70's knowledge than by owning one of these?

Again, this is something I've owned myself for many years, although on my version the stormtroopers are so worn down they are barely visible. Twelve inches long and in deep blue plastic this featured the aforementioned stormtroopers on one side with the slanted logo and on the front of the ruler the classic logo and the then already ubiquitous phrase "May The Force Be With You." What better way to ruler galaxy than by owning this? These days we tend to write their names down as R2-D2 and C-3PO but back in the '70s the preferred method was phonetically, and so we should say that Artoo-Detoo and See-Threepio occupied the front of this maths set tin. Clearly covered in Tatooine grime and standing in front of a blue starfield, the slanted red and yellow logo stands at the top, with once again the phrase May The Force Be With You next to them. Similar to the school set in content, the set itself contained pencils, a protractor, a compass, angle rulers, an alphabet stencil, and a mini Millennium Falcon poster.

So, just a glimpse into some of the many stationary items available back in 1978 when Star Wars first entranced the country it was largely shot in, the UK. It had a lot to overcome, critical opinion was biased against sci-fi but the pure energy, class, and skill that Star Wars exhibited proved that nothing could stop its meteoric rise in the affections of the public. And thankfully for kids raised on Grange Hill, Swap Shop, and Tiswas that translated to the Helix line of stationary.

Grant Criddle of the SWFUK Podcast

Mark is a long-time contributor to Star Wars Insider, is the co-owner of Jedi News, contributes to the UK’s biggest free newspaper The Metro and is the co-host of RebelForce Radio’s RADIO 1138 podcast. When he’s not talking or writing about Star Wars, he can usually be found sleeping, where he’ll most likely be dreaming about Star Wars.