Hear from fans on what Star Wars toys and collectibles mean to them, and how a simple hobby has had a positive impact on their lives. Just as there are many characters in the Star Wars universe, there are many sides to Star Wars fandom. Cosplay, comics, trading cards, art -- we all focus our passion somewhere. Many fans channel their love of the saga through Star Wars collecting. When you keep at the hobby for years or even decades, you get to know fellow fans along the way. Some collectors look out for each other and keep eyes open for a treasure on someone else's list and bonding over the hunt for memorabilia can lead to lifelong friendships. You not only acquire collectibles, you acquire connections.

I spoke with a few fans about their collections and people they've met along the way.

Joe first experienced Star Wars by seeing A New Hope in the theater and started his collection immediately. He remembers that the first toy he had to get two of (one to play with and one to leave pristine in the box) was a Return of the Jedi Darth Vader figure released around Christmas in 1983. I love learning which item first sends collectors down the rabbit hole. Besides the fact that toys are fun, collecting is associated with memories. Joe loves that part the most, "Either the memories it brings back of my childhood when I pick up a classic piece. Or the new memories of conventions, road trips, vacations and other adventures of getting the pieces I'm hunting for and making new family memories. Each piece in the collection is a memory. Over the years that makes for a lot of fond memories. Especially when I look back at some of the pieces from the 1983 collection and remember playing at my mom's bedside when she was sick and couldn't get out of bed. We brought Christmas up to her that year, and I spent the entire Christmas vacation playing Star Wars up there to keep her company." 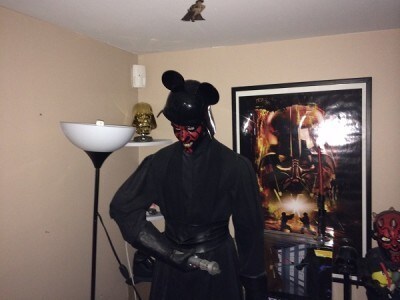 Over the years, he's made several unexpected friends just because of collecting: "There's Ron, a vendor I buy from who I became friends with. He travels up and down the East Coast for the same shows I attend. Then there's Ed and Dina at the game store I buy collectibles through, or Dan my friend in Bethlehem, PA, who calls on me for when he's buying a rare Star Wars item for his store and needs an appraisal. Or my dear, patient and understanding wife who not only accepts me with my Star Wars addiction, but fuels and and expands it into a whole new line of Star Tours merchandise from our many trips to Disneyland. Now that I think about it, it's actually kind of hard NOT to make friends collecting Star Wars."

The bug starts early in several people, and Lori Kneisly began at 10 years old by acquiring action figures (the most alluring gateway into collecting) after she saw Episode IV. Her collection includes her first toy, a C-3PO action figure, as well as "lunch boxes, statues, lightsabers, books, posters, art prints, and wine charms! I have a little bit of everything!" Lori's amazed at how people from all over the world can come together over Star Wars, and she's definitely made buddies in the collecting and fan community. She's attended several Celebrations with a "Star Wars sister" who she met at work conference; they both realized they loved the saga and have been friends ever since.

The television debut of the original trilogy brought new fans in, including Joseph Jones (a.k.a. Lord Malakite from SirStevesGuide.com). He saw Return of the Jedi on NBC in the late '80s, and he officially started collecting in 1995. The launch of the Power of the Force 2 line snagged him. There are many aspects of collecting that he enjoys from the childhood memories associated with it to the variety of figures available from the Kenner and Hasbro models all the way up to more premium statues from vendors such as Sideshow Collectibles.

Joseph also sees psychological ties to the hobby. "Collecting Star Wars items also kind of feeds a psychological need. A need to hold onto those past experiences of youth that shaped me into the person I am today and a need for a challenge; the thrill of the hunt in trying to collect them all. There is just something exciting about standing outside a Toys “R” Us for four hours straight until the midnight premiere of new figures for the newest Star Wars movie. Even the experience of coming face to face with a coyote while walking five miles on foot to and from a Burger King at five in the morning during a severe thunderstorm because you don't have a car and you want to get one of the limited edition 'Mystery of Darth Vader' kids meal toys when the newest toy shipment comes in because there are only five in a box of 200." Yes, that last part actually happened.

He remarks that yet another plus are all the people you meet in the collecting community. It's a diverse group, and you never know what kind of conversations you'll have. "The Star Wars community I've been a part of is quite a tight knit group of people and rather unique. Everyone is quite civil. Things rarely ever descend into the utter chaos of flame wars and trolling like you may find on other communities. At the same times it also isn't run like a dictatorship where the even the slightest quip or question is censored. We each look out for each other and have each other's back. This friendship goes beyond the boards to be sure."

The bond can go beyond friendship. A few years ago Barry Benecke II, a.k.a. TK-523, donated a kidney to a Star Wars friend who lived halfway across the country. Barry met Josh in an online forum for collectors and after exchanging e-mails, Josh mentioned his condition to Barry. He offered one of his kidneys to Josh, and fortunately, it was a match and the operation was successful. It's a little mind blowing to think they only met because of Star Wars.

Share your story about collecting connections in the comments!