A galaxy far, far away and stickers: an awesome Star Wars tradition that continued in the prequel era!

A couple of months back, we took a look at some of the sticker albums released in the UK during the original trilogy era right up to the special editions of 1997. For many British kids, these stickers were as much a part of the Star Wars experience as Palitoy, Action Transfers, and Star Wars Weekly, giving us the chance to build up our knowledge and access to the film in the days before the Internet and instant availability we enjoy today. Now we leap forward to the end of the millennia and The Phantom Menace. 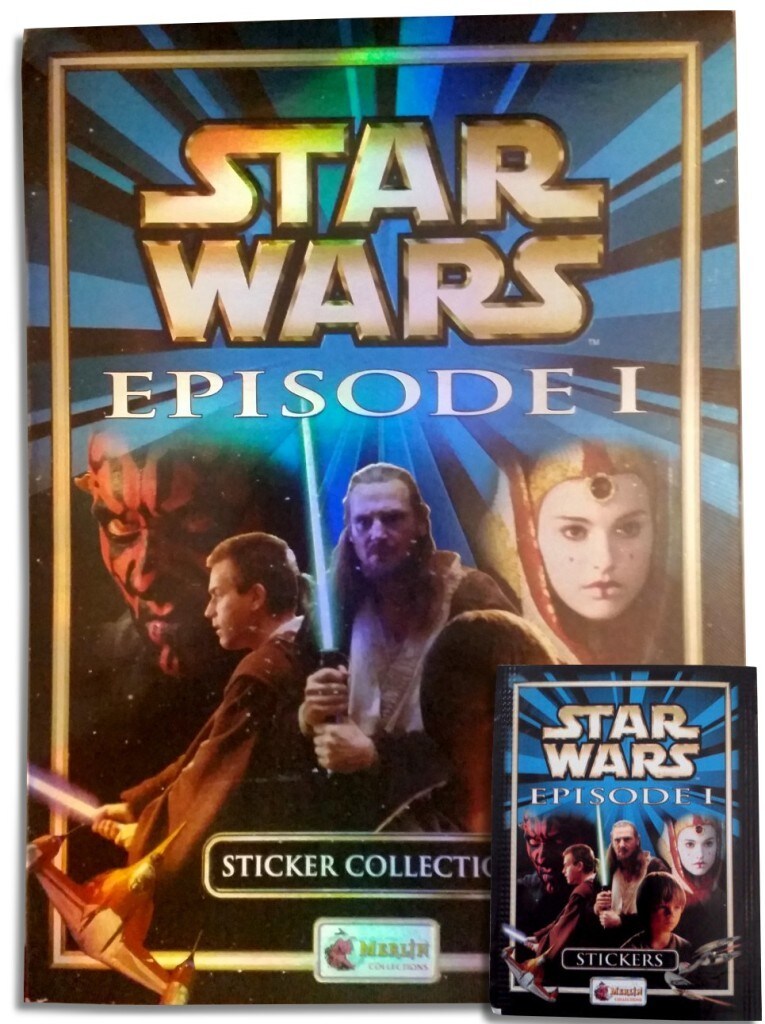 Here in the UK, The Phantom Menace arrived on July 16, 1999, almost two months after its US release and riding a wave of anticipation not seen since the three long summers between 1980 and 1983. As with the second and third films of the original trilogy here in the UK, a sticker album was released by Merlin (a subsidiary of Topps). With a holofoil cover featuring the new heroes and villains of the film, it held a whopping 244 stickers. 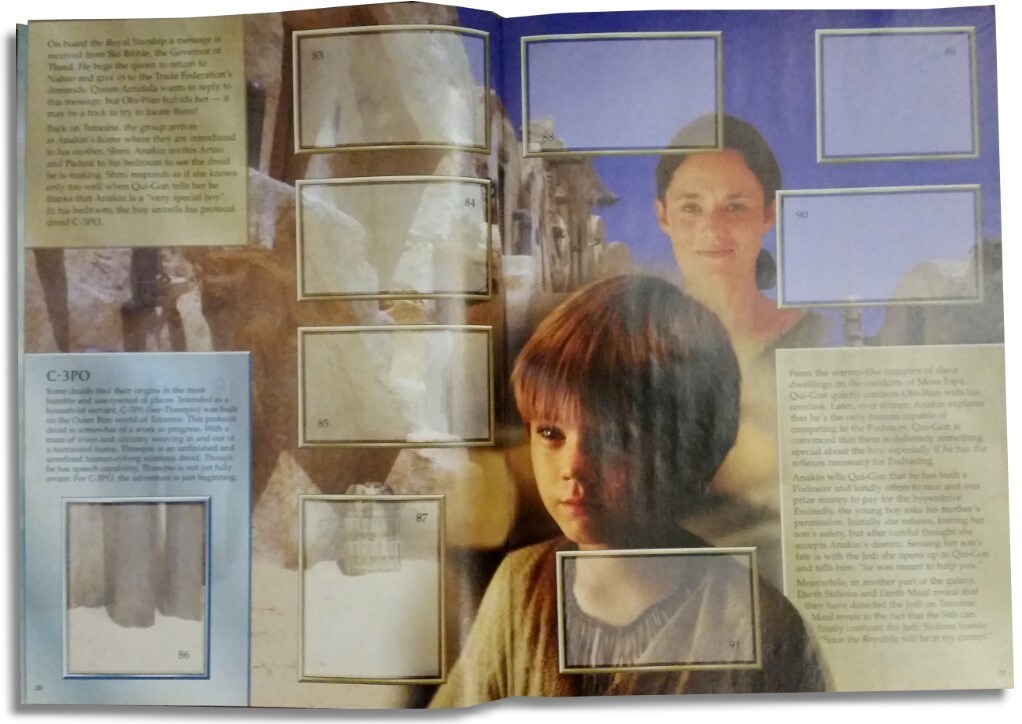 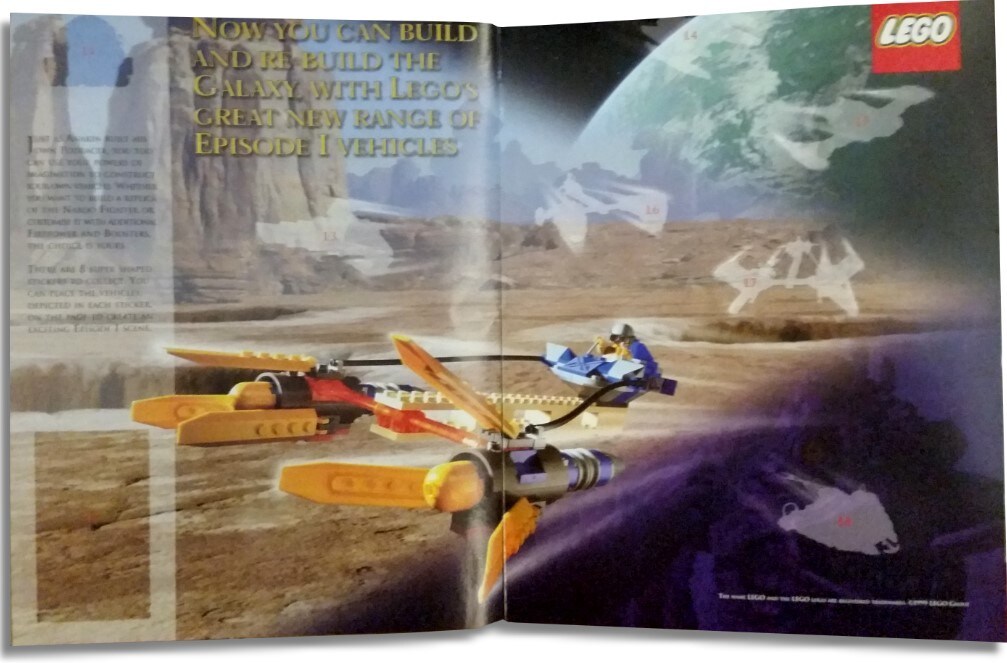 Opening with the classic scroll-up, the album introduced you to the characters as well as a summary of the events in The Phantom Menace, all underpinned by background images from the film. Certain pages were gatefold, allowing for more stickers and sweeping imagery. 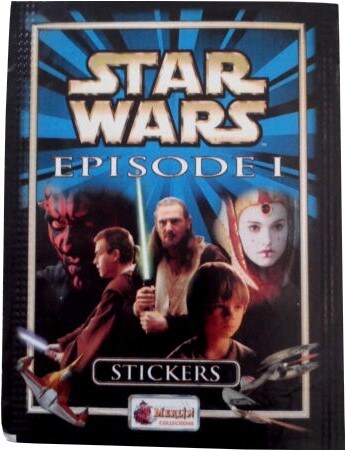 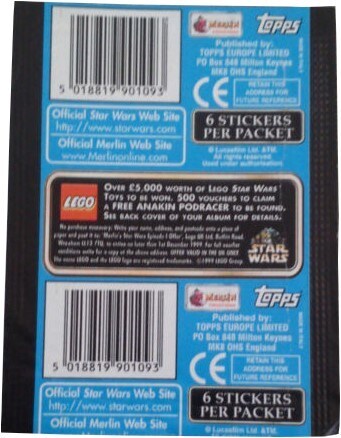 The rear pages of the album featured LEGO Star Wars and had room for a number of LEGO Star Wars stickers. With the saga reaching the land of bricks in 1999, it was a smart and logical idea to feature LEGO Star Wars in the album. Opinion was famously mixed on the first prequel film, but there's no denying the quality of this album. If you have the opportunity, grab a copy as its page layouts alone are worth the effort of tracking it down. 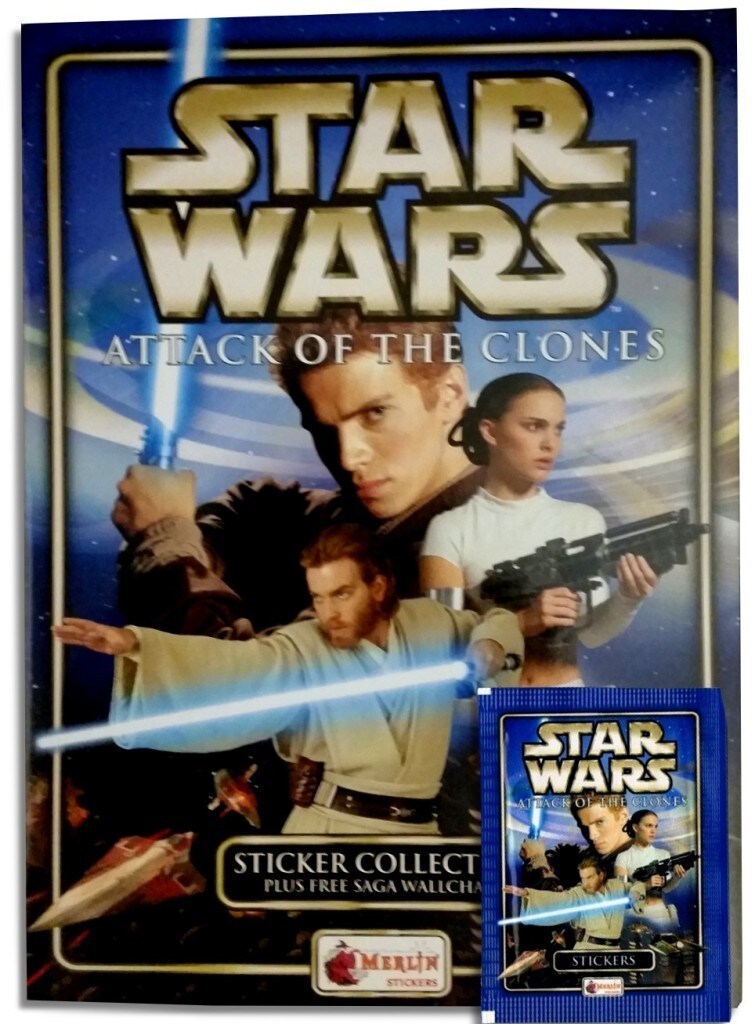 May 16, 2002, brought the release of Attack of the Clones in the UK. Darker and more intense, the film soon blasted up the charts and brought with it a surfeit of merchandise to match. Just like its mid-trilogy brother, The Empire Strikes Back, there were less collectibles than its predecessor, but that didn't stop Merlin from once again releasing a sticker album for the UK market. 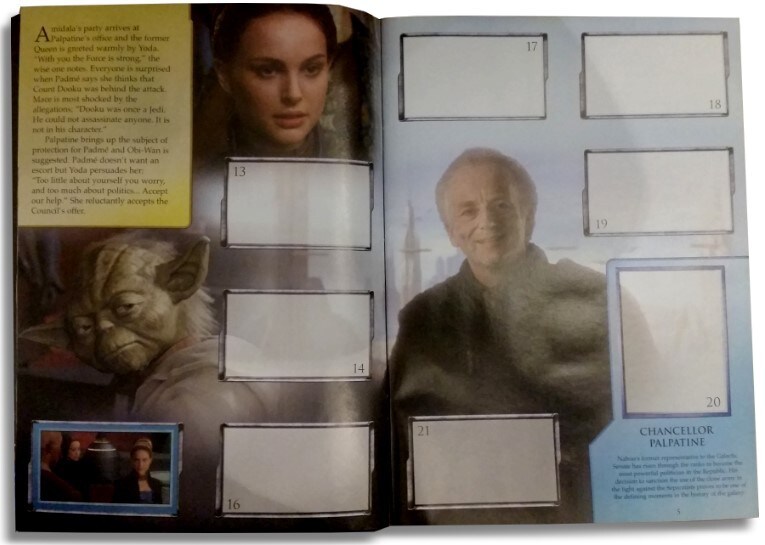 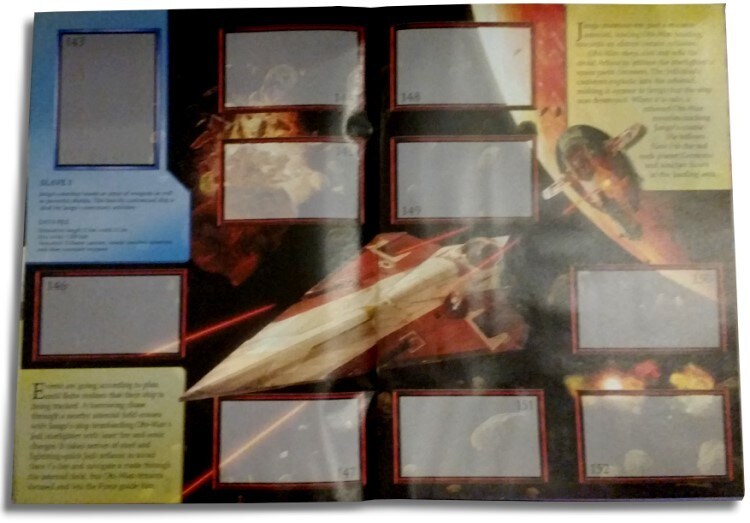 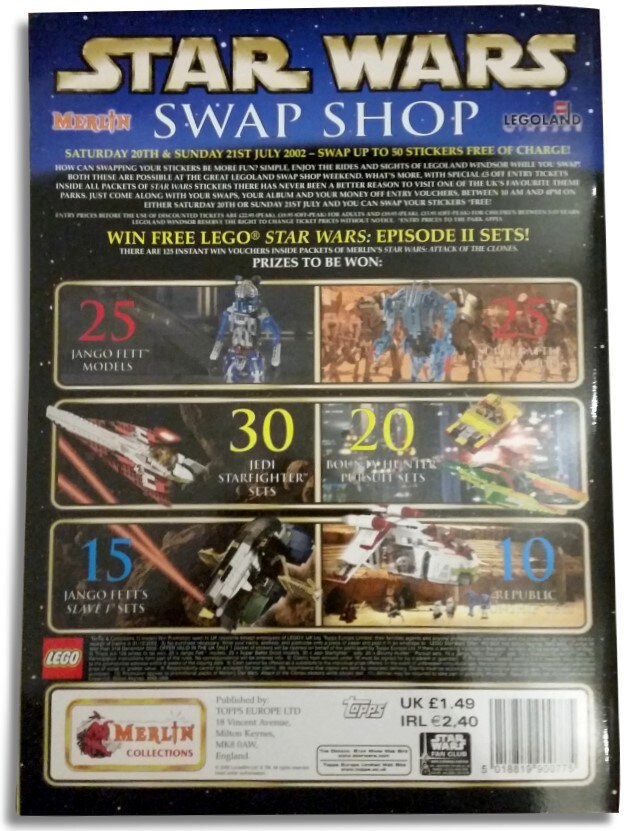 This time the album had 215 stickers as well as a back page of eight LEGO Star Wars stickers. Laid out in a similar manner to The Phantom Menace album, Clones substituted gatefold pages for a free saga wallchart in the center of the album. 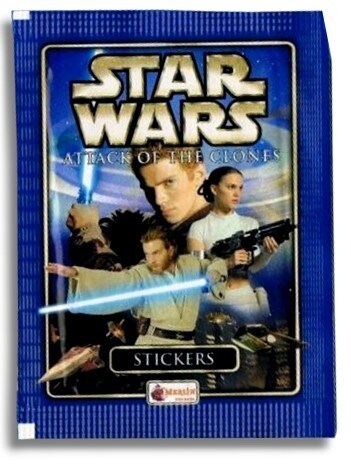 The album again opens with the yellow on black scroll-up, taking us through the story of Attack of the Clones and giving us fresh insight into new characters and worlds. Fast forward to 2005 and the circle was about to be completed. Well, for the time being at least. Merlin brought us a plush album holding 291 stickers along with a back page consisting of eight Revenge of the Sith vehicle stickers.

As with the previous two albums, it opens with the full scroll-up from the film and launches us into the Battle of Coruscant, giving details on not only the plot but key vehicles and characters as well. 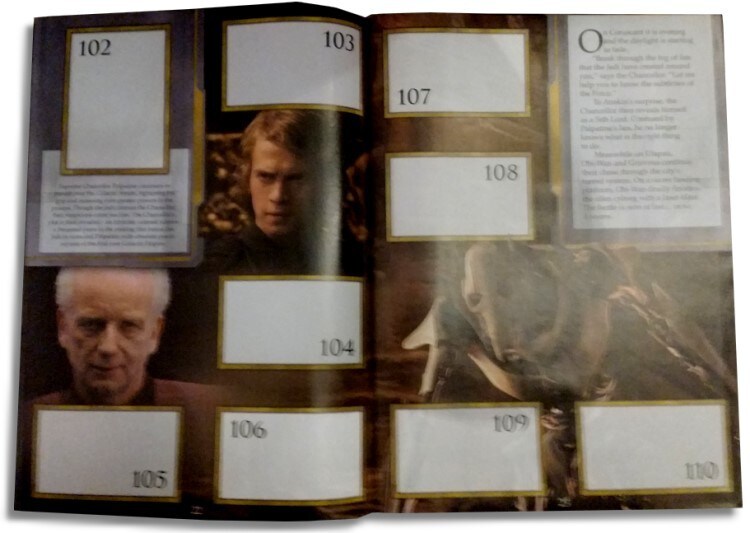 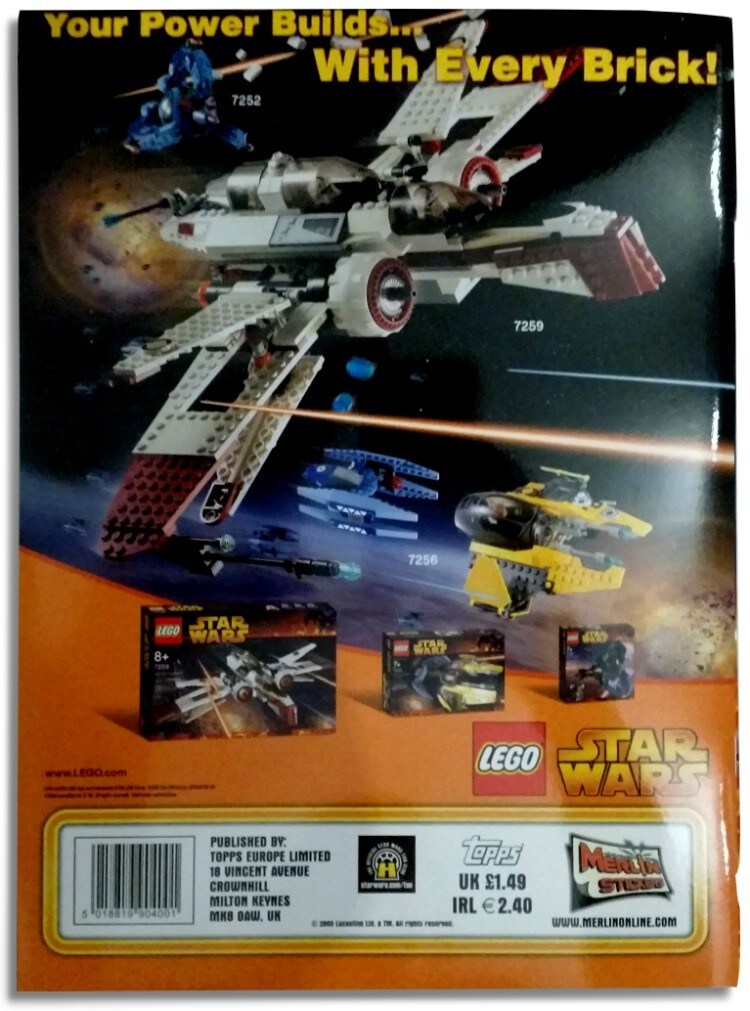 Tucked away in the center pages is a gorgeous oversized poster with room for 24 stickers chronicling the entire six-movie saga, as well as an order form for Topps Direct products and six free stickers to get your collection started. 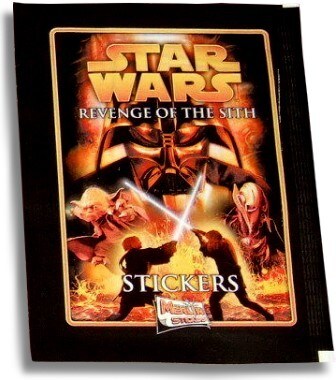 Continuing the LEGO association, that back page is given over to a large LEGO ad hyping the Revenge of the Sith line, reminding you that your power grows with every brick. And who are we to argue with that? 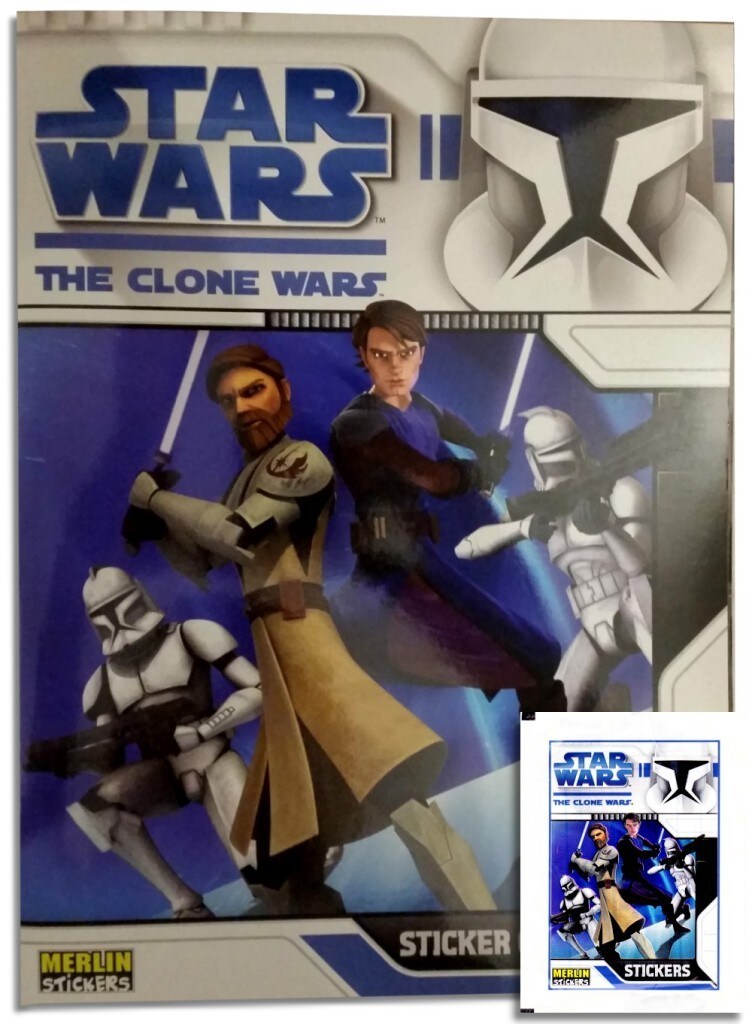 The cinematic adventure may have been over, but the saga was set to continue on the small screen with the arrival of Star Wars: The Clone Wars -- and a sticker book, of course. Opening with a brief explanation of where the galaxy stood at the start of the 2008 Clone Wars film ("A Galaxy Divided!"), we are once again taken through the events of the film via narration boxes and character spotlights. 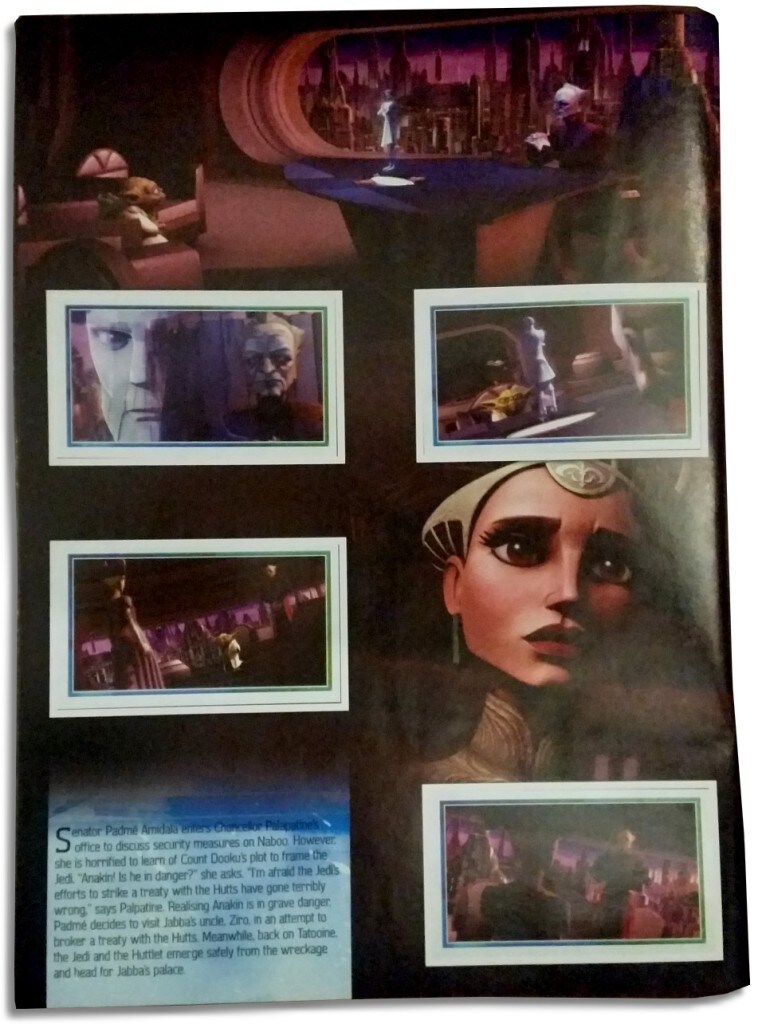 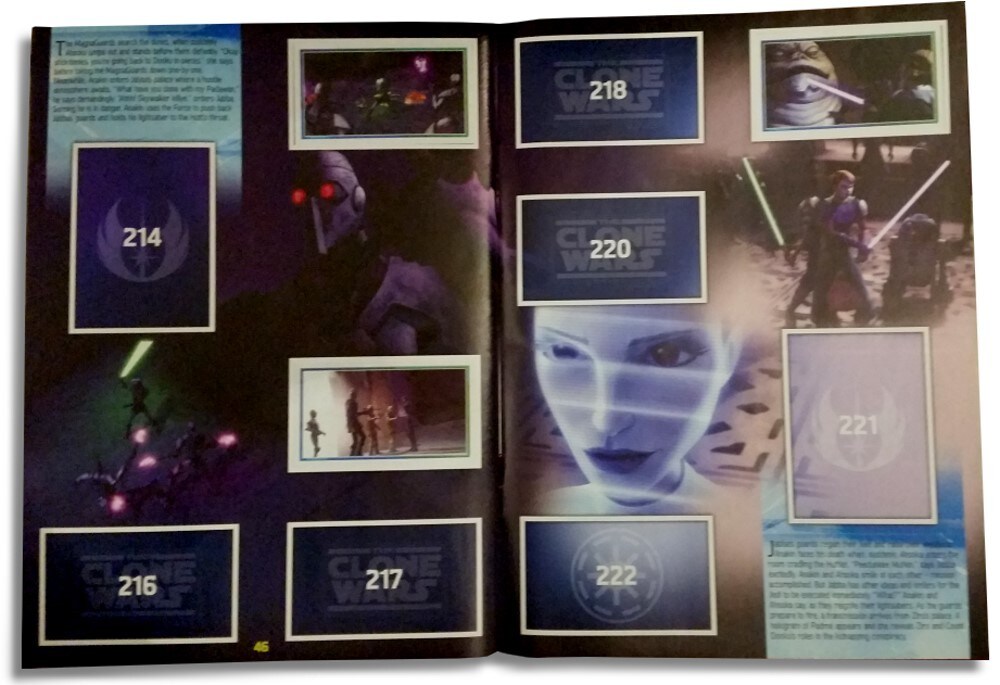 Produced by Merlin, it held 226 stickers from the film as well as a pull-out poster that held 14 stickers featuring the main protagonists of the movie. 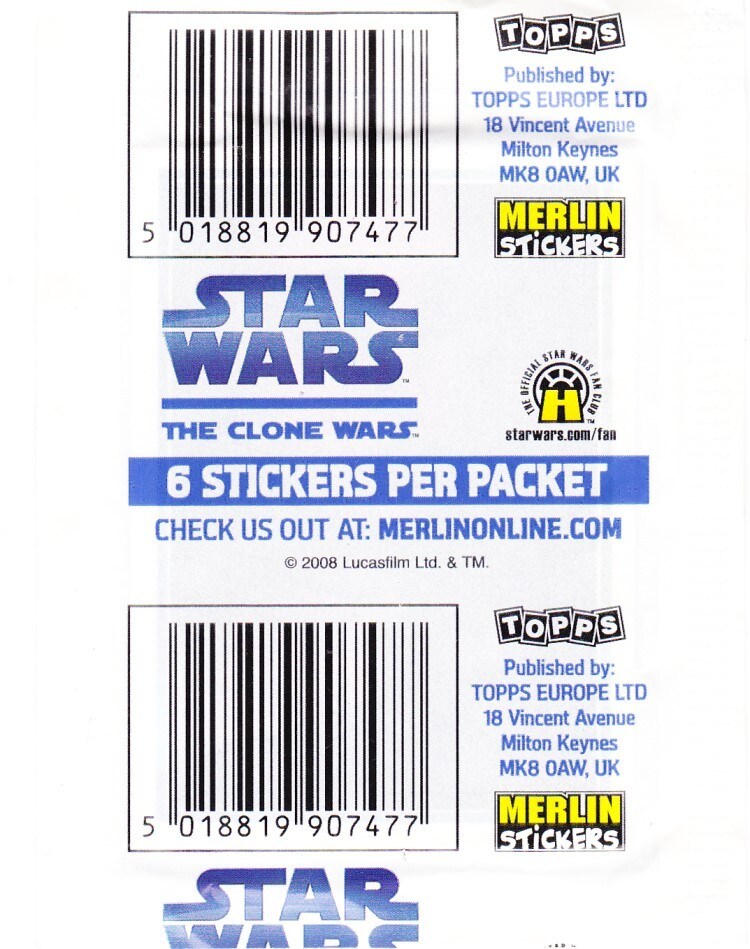 Looking back seven years, it's interesting to see how Ahsoka -- a character we are now so intimately familiar with through six seasons of The Clone Wars and her appearances in Star Wars Rebels -- is introduced. She's front and center (albeit often carrying Rotta the Hutt -- whatever happened to him?) and is on almost every page of the album. It was obviously a successful ploy, as Ahsoka is among the most popular characters in all of Star Wars. Leap forward four years to 2012, and the entire saga is gathered together in this collection, now released under the Topps banner. Complete with 227 stickers, the center of the album has a fold-out poster that features LEGO Star Wars characters -- and 13 additional stickers. 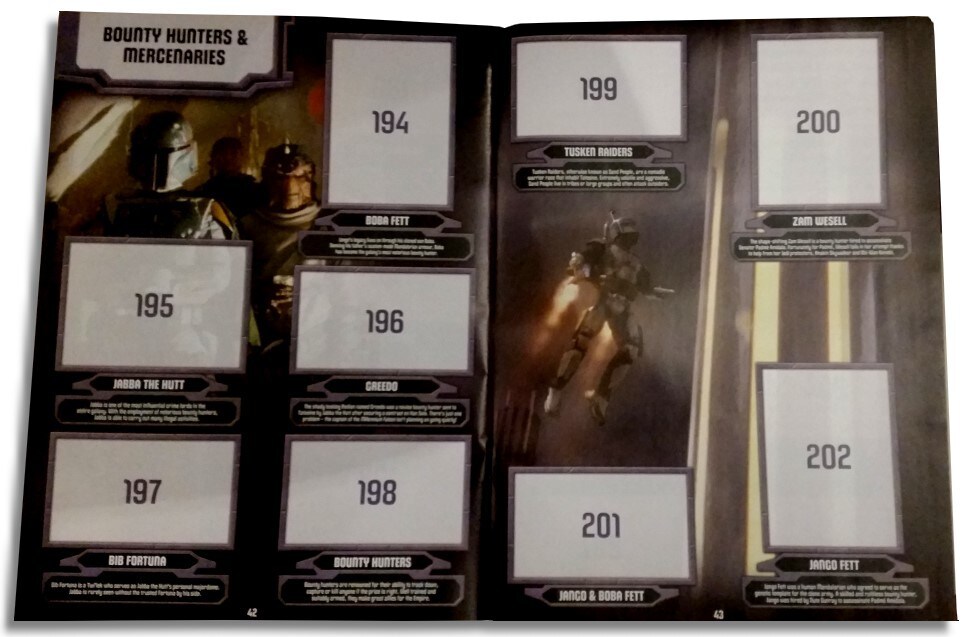 The album takes you all the way from The Phantom Menace right through to Return of the Jedi, breaking up the action with double-page spreads on the Jedi, the Sith, vehicles from the saga, the Republic, Anakin the fallen hero, droids, Rebel heroes, the Rebel Alliance, the Empire and bounty hunters and mercenaries. It's a concise but lavish run through the two trilogies. 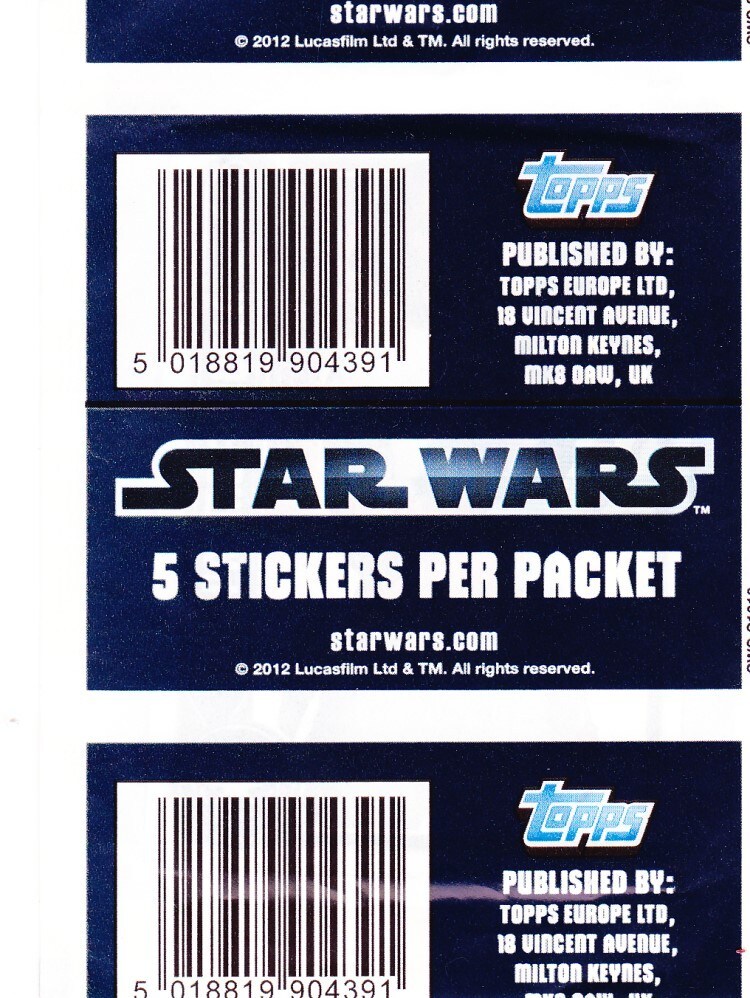 It's now 2015, and the latest UK sticker album to be released focuses on the premiere episode of Star Wars Rebels, titled "Spark of Rebellion." One-hundred and ninety-nine stickers make up the main album, while the centerfold poster has an additional 10. 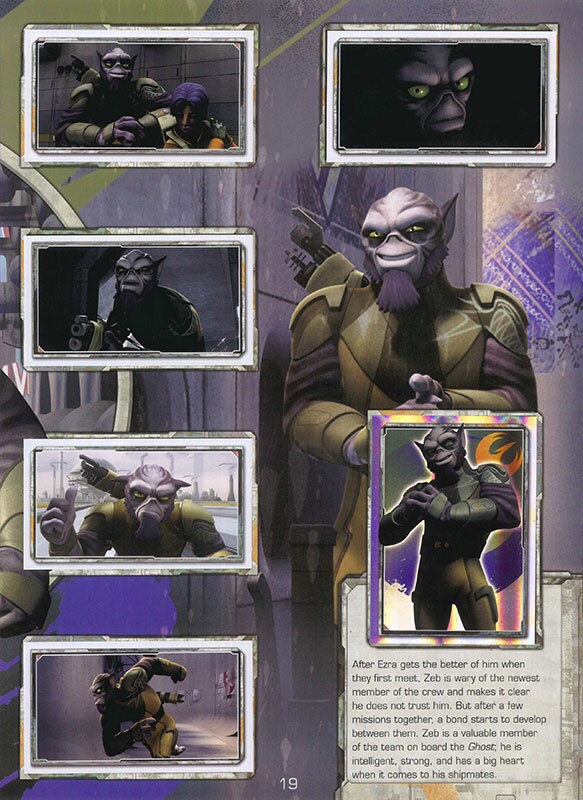 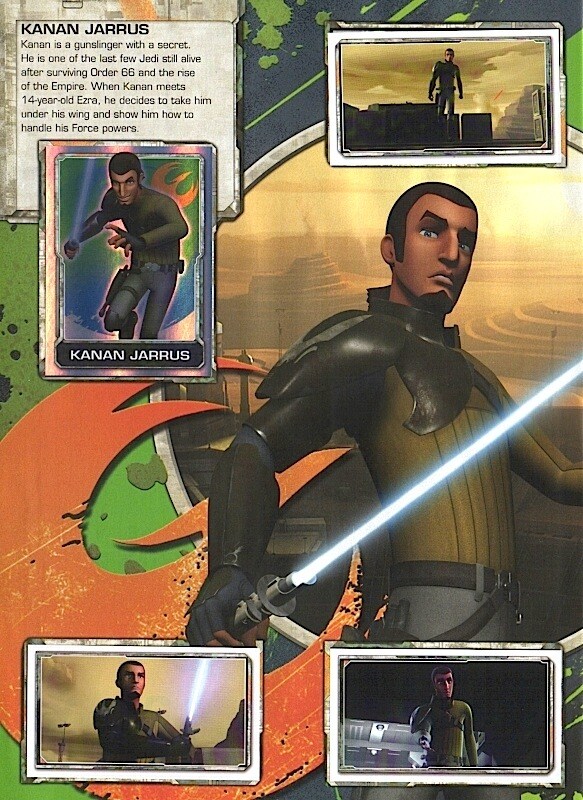 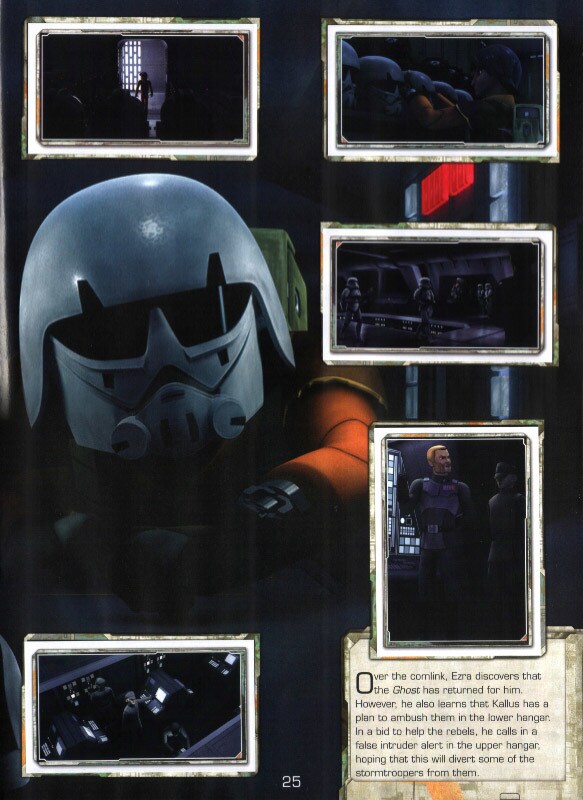 This is the first album to be released in the Disney era, and comes with six free stickers and a LEGO advert on the back page. 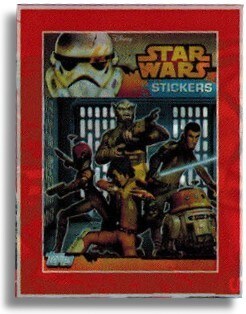 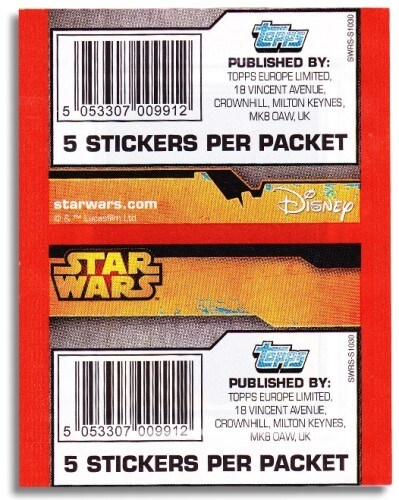 With a selection of prism foil stickers, it joins the previous albums that have effectively presented the stories before the release of the movie or TV show.

So there you have it. A beginner's guide to the history of the UK sticker albums that accompanied the prequel trilogy, The Clone Wars , the six-film saga, and Star Wars Rebels. Keep counting down to December until we see Star Wars: The Force Awakens, and (fingers crossed) the first sticker album of the new trilogy.

Mark has contributed to Star Wars Insider for almost a decade, is the owner of Jedi News, writes for DeAgostini’s Build The Millennium Falcon partwork magazine, and co-hosts RADIO 1138. He’s an honorary member of the UK Garrison, a friend of the Rebel Legion, and when he’s not talking, tweeting, or writing about Star Wars, he can usually be found sleeping where he’ll most likely be dreaming about Star Wars.