A report from the the show floor in Birmingham, England, featuring the 501st and lots of vintage toys. 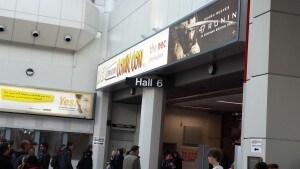 The eyes of sci-fi and fantasy, anime, and comics fans across the UK turned to Birmingham, the nation's second city, over the weekend of 23rd and 24th November as Memorabilia returned to Brum for the second time this year, bringing with it stars of screens both large and small, voice actors, sports stars, cult heroes, comic artists, and writers and cosplayers of every ilk. And, as ever, it made for a fascinating two days of fun, color and vibrancy celebrating every facet of fandom. Take a close look at the image above. Once you've mopped up the drool, check out the vintage Palitoy Death Star just off centre, low right. An exquisite example of the playset, this near mint condition item was retailing for £2000.00 ($3,250), and that was just one of the many jaw-dropping items on show. The Sears Cantina (complete with Blue Snaggletooth) still with shrink-wrapped figures was retailing for around the same price, and it was noticeable that the Palitoy items were going for significantly more than their Kenner counterparts (as is the usual practice here in the UK where the numbers of Palitoy items are lower than that of Kenner). You can only imagine that with the new films incoming, that value will continue to rise. Memorabilia has increasingly become a hot-spot for costumers and cosplayers, more so since the current owners of Memorabilia MCM Expo opted to expand the show by bringing in not only a sports-focused area of the show but also Birmingham Comic Con, a comic expo bringing artists, writers and companies to the event and swelling the crowds with costumers. As always the event was attended by the country's premier Star Wars costuming groups, including the UK Garrison and the Rebel Legion (of which I am a proud Honorary Member), and their interaction with the crowds thrilled the masses. UK Garrison XO Gary Hales told us that they were as proud of the troops that weekend as ever, a ringing endorsement of not only the event and the voracious fans in the area but of the UK Garrison and the Rebel Legion themselves. Demanding the best, they continue to push the bar, as do the hard-working members of the UK R2 Builders Club, thrust into the spotlight thanks to Lee Towersey and Oliver Steeples and their involvement in Episode VII. Their dedication and craft is inspiring and we can only look forward to the future and the advances they'll bring to astromech building. 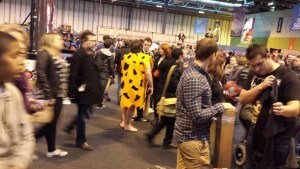 We kept ourselves busy, touching base with fellow fans, dealers and groups and recording a segment of the second episode of Radio 1138, our new addition to RebelForce Radio's ever-expanding feed, hosted by myself and James Burns. As always there was plenty to chat about -- after all, where else are you going to see Fred Flintstone chatting to the Tenth Doctor? We've already started discussions with MCM Expo to play a larger part in future Memorabilia events...watch this space!