The original Fett discusses what it was like inside the bounty hunter's iconic armor -- now part of the Star Wars Identities exhibit.

Enshrined among the many costumes at Star Wars Identities in London is the set of infamous battered armor that made Boba Fett an icon.

In those early years of the original trilogy, the bounty hunter was a blank slate for viewers — a faceless mercenary with a mysterious past, a preternatural patience to nab his prize, and the swagger of a pro. A man of endless gadgets but few words, uttering just 29 words in the classic films, Boba Fett quickly became a fan favorite. First envisioned as part of an elite breed of stormtroopers with gleaming white armor, Fett’s finalized costume now stands alongside Vader’s finest soldiers in the exhibit open through Sept. 3 -- and as announced today, from September 30-March 11, 2018, in Utrecht at CineMec.

StarWars.com spoke to the man behind the dented helmet himself, Jeremy Bulloch, as he made a stop at the show to revisit his old armor and relive his memories of being on set.

In the years since his debut, Bulloch has become something of a fan's man. He still tries to answer every piece of fan mail that crosses his doorstep, makes several convention stops a year, and joined up with the 501st Legion — as who else? Boba Fett! — after he was made an honorary member.

But back in 1980, the then 35-year-old actor just happened to be the right size to don the gear that would define his career. 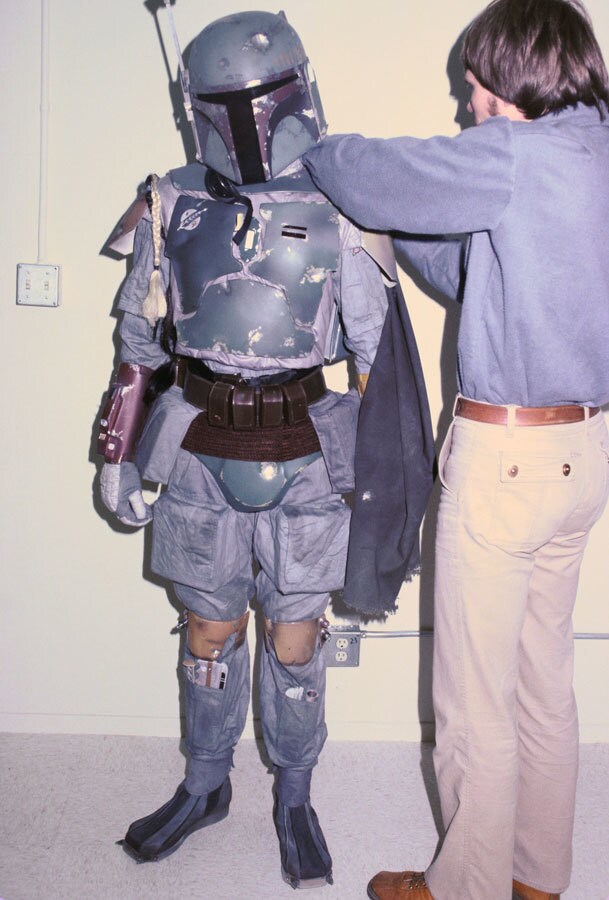 StarWars.com: As I understand it, you were sort of conscripted to play Boba Fett by your brother who was working on The Empire Strikes Back and was tasked with finding someone to fit into the costume. Can you tell us, what was your first impression of the armor and what was it like that first time you put it on?

Jeremy Bulloch: Well, I’ll go to the second bit first. The first time I put it on it was not comfortable but it just had a feel about it. I don’t know why, I thought it was incredible. It is was not a perfect fit, but they just sewed this, did this, did that and then the costume came to life. I used to wear it every day.

StarWars.com:  There’s such a presence in the way you carried yourself when you were wearing it and made the simplest of gestures.

Jeremy Bulloch: Well, I think there’s something about the costume. It is not comfortable but you had to make it look as though it were, I suppose, using a bit of acting...It was ripping your skin apart, but you know the character. He’s a bounty hunter and he’s not going to say, "I want a soft cushion." [Laughs] But the costume, gradually, I got used to. But it was sharp. Other people have the same problems and after awhile it started to fit, I think in my mind, really. It began to fit and I thought, here we go... 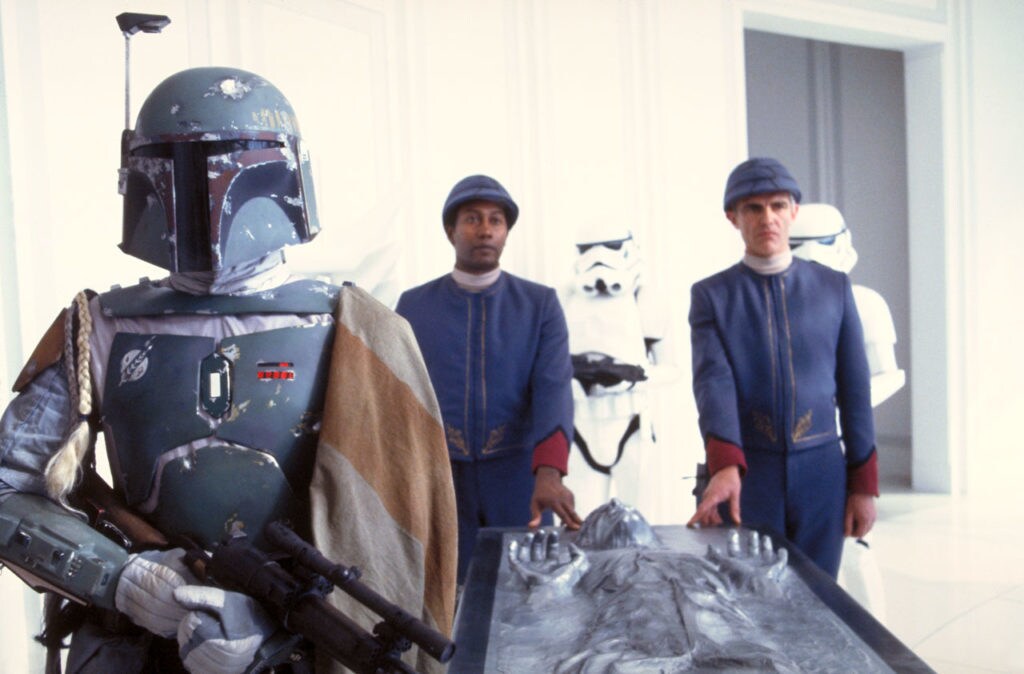 StarWars.com: You’ve mentioned before that you drew some inspiration from The Man with No Name in A Fistful of Dollars. What was it about the Boba Fett costume that made you think of Clint Eastwood’s character? What was the correlation there?

StarWars.com: To go back to what you were saying about the comfort level of the costume, I’ve always wondered — could you see out of the helmet?

Jeremy Bulloch: Not brilliantly, but when you have to wear it, you have to wear it. The thing is to pretend. You pretend what you’re doing, it’s a pretend scene, but of course it’s a real scene. You just have to get on with it. And it was tough...but not for me because I’m Boba Fett. 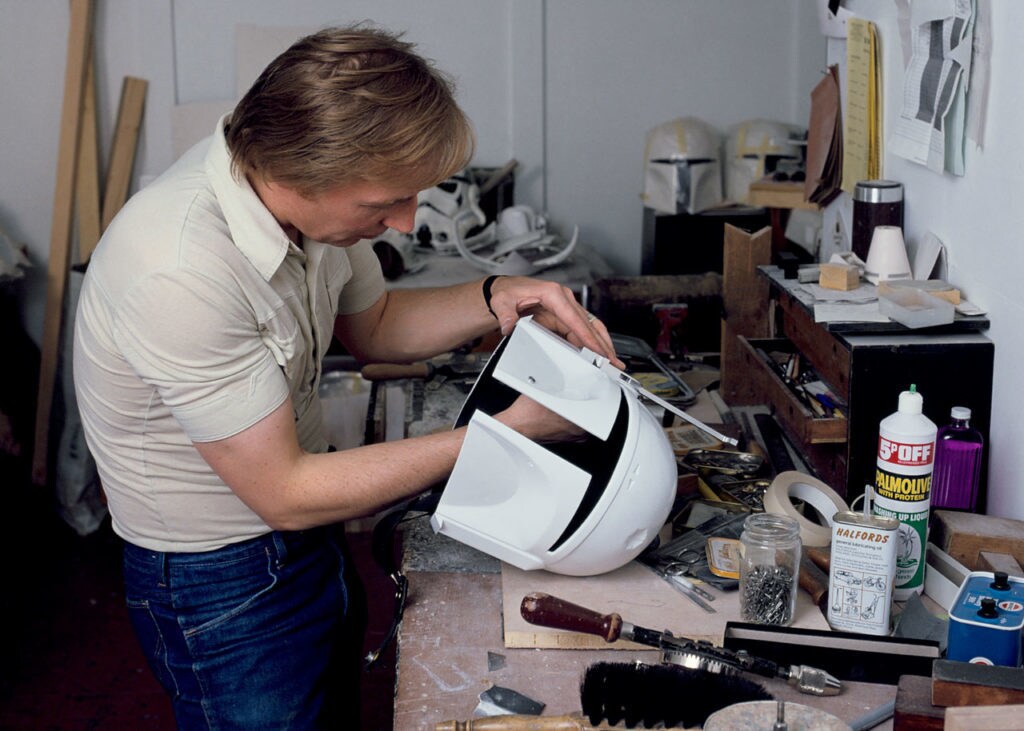 StarWars.com: So was there a trick to maneuvering around when you’re wearing that helmet?

Jeremy Bulloch: No, there’s nothing you could do. You can’t sort of say, "Can I have a sort of cushion here by me knee here because I hurt?" If you start moaning like that you should be doing some other film.

StarWars.com: Is there anything you would have changed if you’d had the chance?

Jeremy Bulloch: If I had the chance I’d re-make the knees and the legs, which would be the worst part...it was cutting into your thighs and your knees.

StarWars.com: What was the most unwieldy part of the outfit? I would think that jetpack was a little difficult to carry.

Jeremy Bulloch: The jetpack used to clip on your back when you’re ready to shoot. They wouldn’t be as nasty to say, "Come on put the jetpack on now," 20 minutes later you’re doing a bit of the film. So really, they used to take off that jetpack and put it on just before the scene. So they were very kind.

StarWars.com: You’ve amassed quite a bit of Boba Fett memorabilia, as well.

Jeremy Bulloch: I have got sort of memorabilia from Star Wars...It’s not massive but it’s nice little bits and pieces.

StarWars.com: What’s one of your favorite pieces from the collection?

StarWars.com: Ha! Yes, but, do you have a favorite thing that you're just stunned your costume is a part of?

Jeremy Bulloch: I have sort of an electric light...it has got a light on the helmet that switches on at the wrong time. So I’m not too happy with it at the moment. 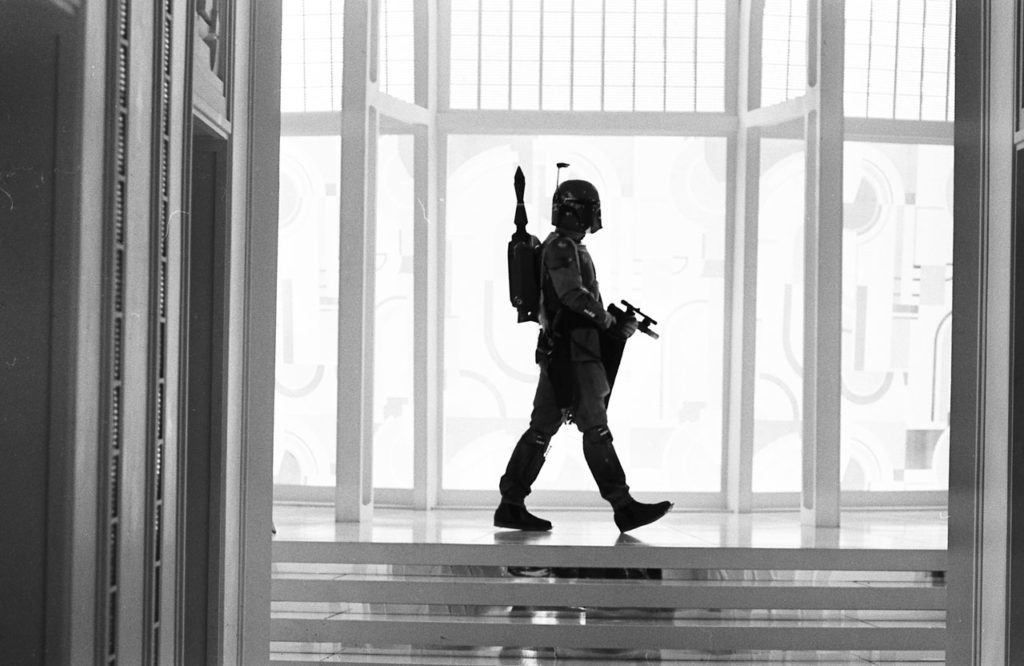 StarWars.com: You said once, “Boba Fett standing still is much cooler than saying a line.” Why do you think this particular character has been such a fan favorite for all these years?

Jeremy Bulloch: I think he has charm. I don’t mean to say that, but I think he has time for people before he aims the gun and then that’s it. He’s a nice guy...sometimes.