Get a first look at Star Wars: Darth Vader and the Cry of Shadows #4 and Star Wars: Dawn of the Jedi -- Force War #5! 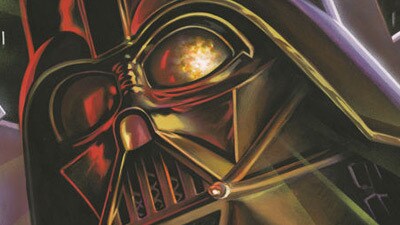 Fighting at the side of Darth Vader in an air attack against a group of inspired, cause-driven Separatists, Stormtrooper Hock has an opportunity to show his value. When he is captured, learning of the enemy’s cause -- and who they’re working with -- only reinforces Hock’s belief in the Galactic Empire.

The alien Rakata are on the brink of opening the Infinity Gate, ready to unleash their Empire on an unsuspecting galaxy! The Je’daii must win this battle -- even if it means the end of their order. But how can they attain victory when their greatest hero has joined the enemy?

“Ostrander and Duursema have reverse-engineered the setting, characters, and Force philosophies to create a fully believable ‘real’ ancient history of the Jedi.” -- Fan Girl Blog